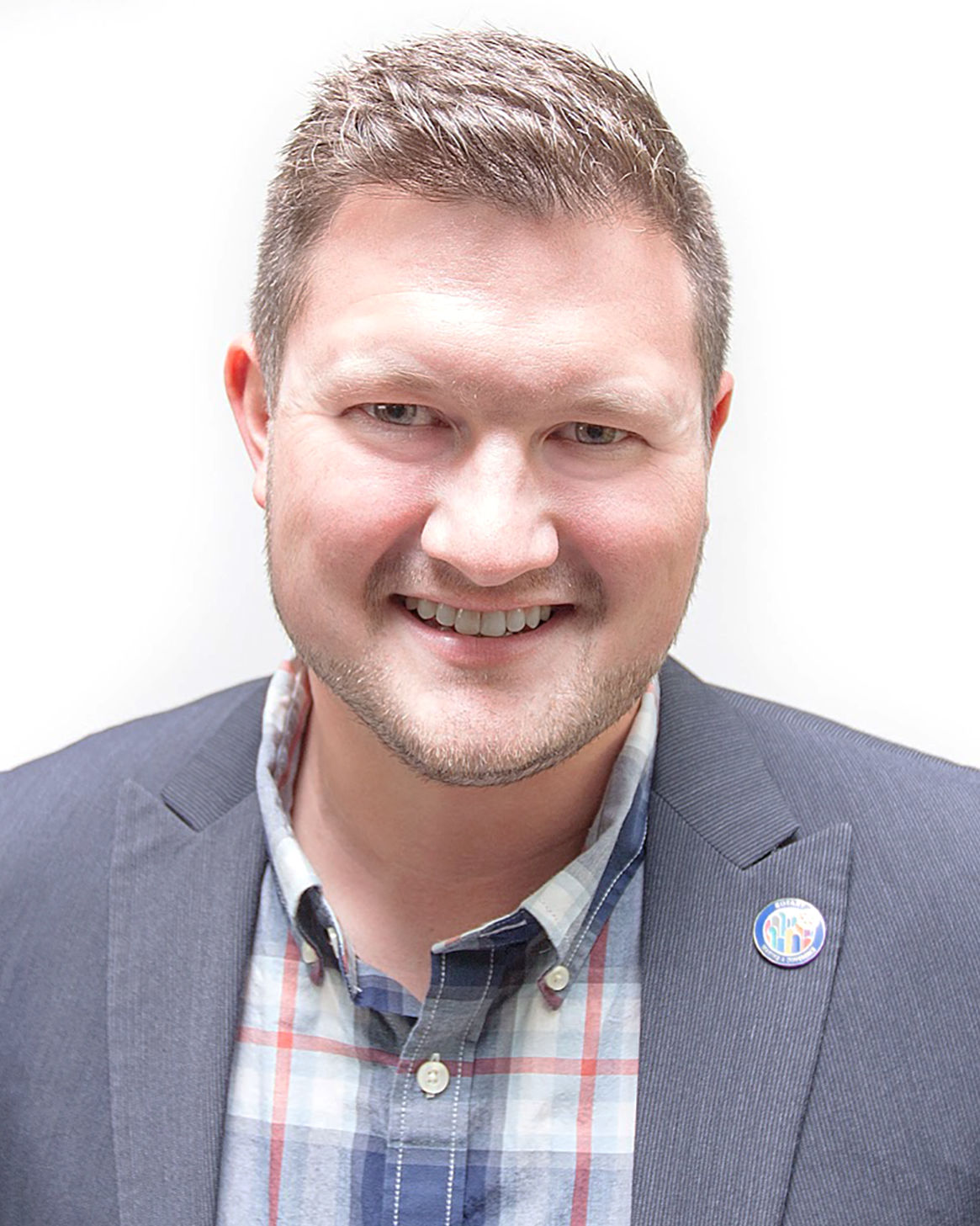 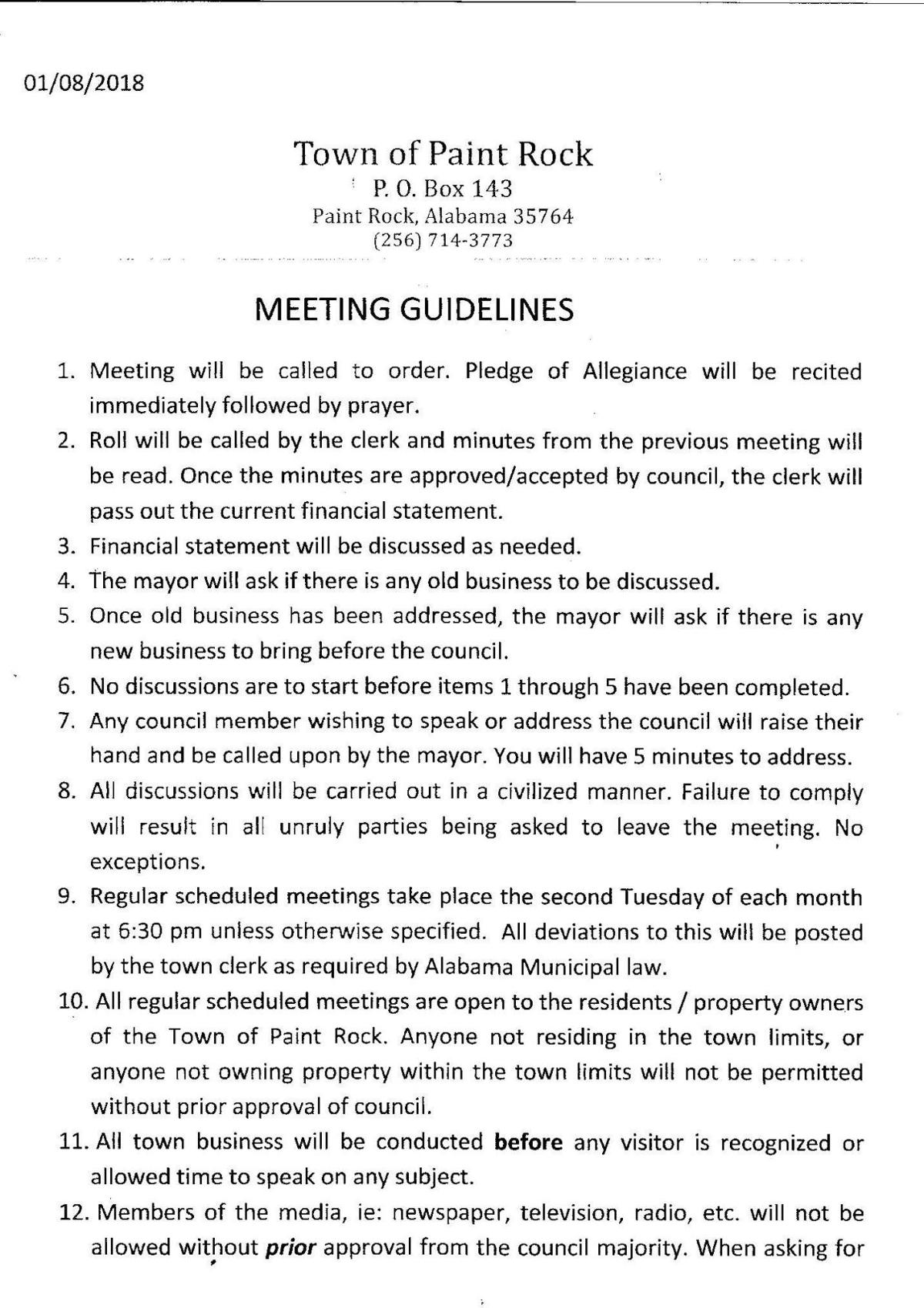 Open Meetings: Not a suggestion, but the law

Open government is a bedrock of democracy, so transparency laws require policy makers to meet, deliberate and make decisions in the open.

The Alabama Open Meetings Act requires all governmental meetings to be open to the public.

The act reads, “It is the policy of this state that the deliberative process of governmental bodies shall be open to the public during meetings.”

So, we were surprised to receive a document outlining meeting guidelines for the Town of Paint Rock — a small community of 200 along Highway 72 in southwest Jackson County.

Many of the 13 guidelines are routine — call to order, the Pledge of Allegiance, roll call, old business and new business.

Three items are outright illegal, though.

Item 10 states, “All regular scheduled meetings are open to the residents/property owners of the Town of Paint Rock. Anyone not residing in the town limits, or anyone not owning property within the town limits will not be permitted without prior approval of the council.”

Item 12 states, “Members of the media, i.e.: newspaper, television, radio, etc. will not be allowed without prior approval from the council majority. When asking for approval, you must present a valid reason/justification for the media to attend.”

Item 13 states, “Recording of any meeting of the town council is not permitted. Posting of any Town minutes, email to council members, financial statements, etc., to ANY unauthorized media source is strictly forbidden.”

We couldn’t believe what we were reading.

“What goes on in Paint Rock is the business of the people who live in Paint Rock,” she said. “I really don’t see the benefit for anyone outside of Paint Rock or who doesn’t own property here to come to these meetings. They’re open to anyone who lives here. Anyone else can stand outside the door, but I can close the door.

Mayor Fisk also asked to go on the record saying that the town does not have an official Facebook page or website, and what is circulating online shouldn’t be.

“What you’re seeing on Facebook is a disgruntled citizen who doesn’t like that we have a government and can’t do whatever they want to do,” she said. “We’re just a small community that hasn’t had any leadership in a long time and we’re trying to clean it up.”

Paint Rock does not have an attorney on staff, or contracted. The town clerk said she thought the mayor had consulted the Alabama League of Municipalities about the guidelines.

We called a few attorneys specializing in municipal law and they all responded with the same feedback — there is no way the Paint Rock had consulted an attorney; the city is in direct violation of the Alabama Open Meetings Act and its rules are indefensible in court.

The act states that the “open or public portion of a meeting is that portion which has not been closed for executive session … and which is conducted so that constituents of the governmental body, members of the media, persons interested in the activities of the governmental body and citizens of this state could, if they so desired, attend and observe.”

There is no qualifying requirement to be a citizen nor a landowner in the town, and no indication that the town council must first approve of anyone’s attendance. The law also provides that members of the media cannot be restricted from attendance.

Section 6 states “a meeting of a governmental body, expect while in executive session, may be openly recorded by any person in attendance … providing the recording does not disrupt the conduct of the meeting.”

Not only do the policies violate the Alabama Open Meetings Act, but they are diametrically opposed to ideals in the First Amendment to the U.S. Constitution, which provide for a free press and its responsibility to hold those who govern accountable.

“In the First Amendment, the Founding Fathers gave the free press the protection it must have to fulfill its essential role in our democracy,” wrote former Supreme Court Justice Hugo Black in 1971.

This protection also means members of the media can attend a town meeting in Paint Rock, Alabama, without asking for prior approval.

The law in Section 9 states “enforcement of this act may be sought by civil action brought in the county where the governmental body’s primary office is located by any media organization, any Alabama citizen impacted by the alleged violation to an extent which is greater than the impact on the public at large, the Attorney General, or the district attorney for the circuit in which the governmental body is located.”

That is not the path we hope to take.

We don’t believe the Town of Paint Rock to be intent on operating in secret. Instead, we see this as a misguided attempt to keep order.

I respect that the town’s leadership is attempting to make hard decisions and improvements. The law does not allow policies that censor public input or reject media coverage, however.

We hope leaders in Paint Rock will work quickly to repeal these misguided restrictions, and promote public discussion and input — even input that is disagreeable or unproductive — as opposed to strict controls on the very process that makes our form of government the envy of nations.

Paint Rock residents should urge their elected leaders to act in a hurry to prevent embarrassing, expensive litigation.

Brandon Cox is the editor and publisher of the Sentinel. He can be reached by email to brandon.cox@jcsentinel.com. Follow Brandon on Twitter at @BrandonJCox.

We hope leaders in Paint Rock will work quickly to repeal these misguided restrictions, and promote public discussion and input — even input that is disagreeable or unproductive — as opposed to strict controls on the very process that makes our form of government the envy of nations.

In what most cases would not be considered newsworthy, the Town of Paint Rock held a regularly scheduled town council meeting Tuesday evening – and the meeting was open to members of the press and the public.