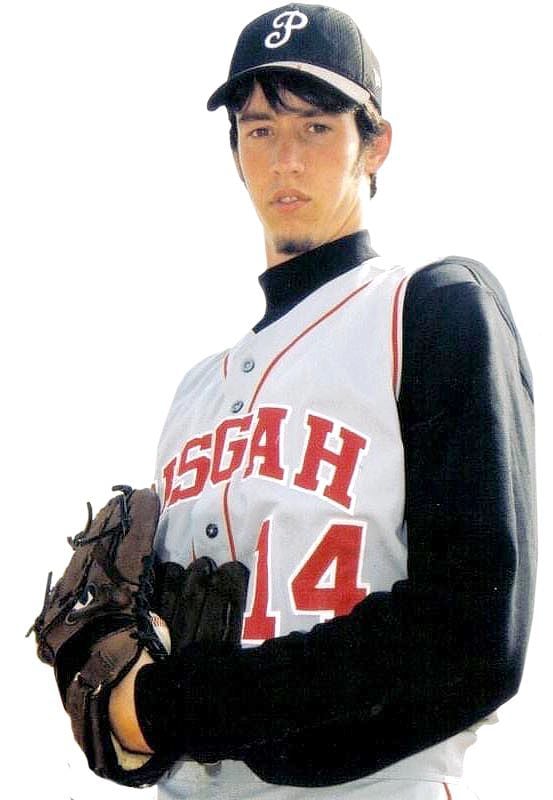 Matthew Darwin during his senior season at Pisgah High School in 2004. 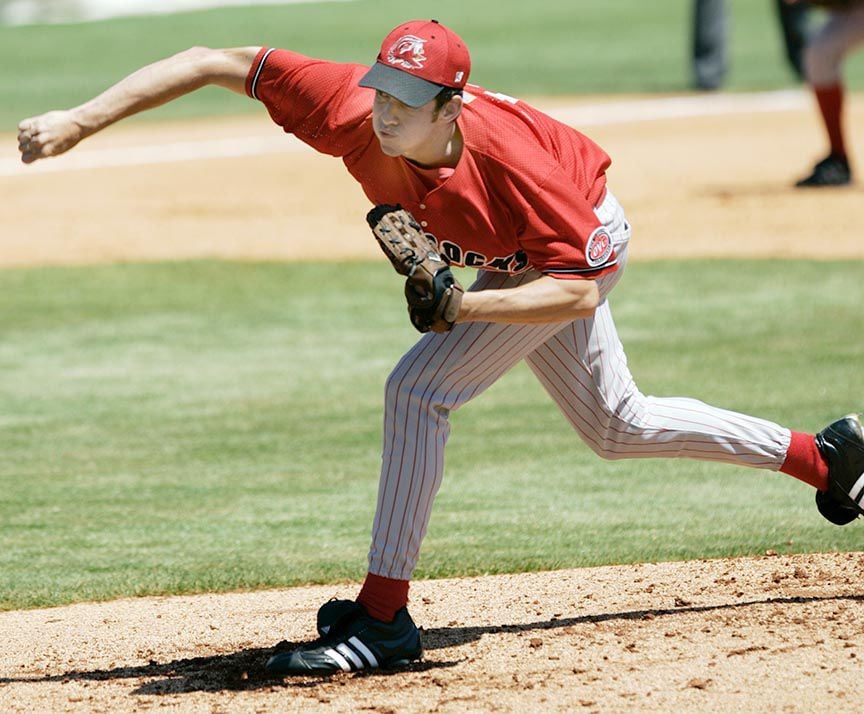 Matthew Darwin pitched for two seasons for the Jacksonville State baseball program before an arm injury ended his career after the 2006 season. Darwin had an 8-4 career record while pitching in 32 games, including 26 starts. 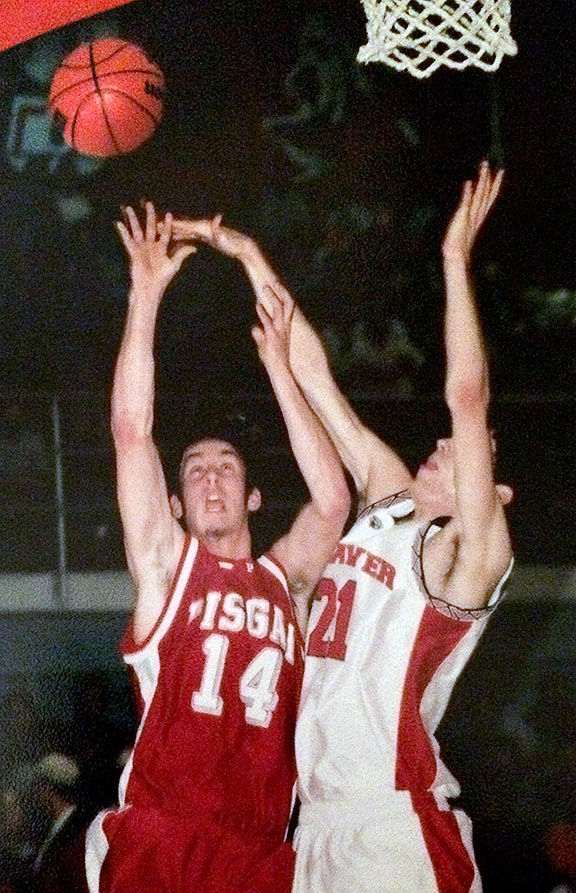 Matthew Darwin (14) draws a foul as he shoots a layup during Pisgah's 72-64 Class 2A Northeast Regional semifinal win over Weaver in 2004.

Matthew Darwin during his senior season at Pisgah High School in 2004.

Matthew Darwin pitched for two seasons for the Jacksonville State baseball program before an arm injury ended his career after the 2006 season. Darwin had an 8-4 career record while pitching in 32 games, including 26 starts.

Matthew Darwin (14) draws a foul as he shoots a layup during Pisgah's 72-64 Class 2A Northeast Regional semifinal win over Weaver in 2004.

Just days after losing her son, Pam Darwin and her daughter Paige Darwin found going through some of his belongings to be a slow process.

They would stop and read over old newspaper clippings of stories and game reports from Matthew Darwin’s high school and college sports playing careers.

They read about his triumphs, his accomplishments, and in a sense, a big part of his life. It was a sweet trip down memory lane.

“I may cry when I read them,” Pam Darwin said, “but they really do comfort me

Matthew Darwin displayed athletic talent from a young age, but the traits that defined his athletic career were his competitiveness, poise, toughness and desire to win.

“He wasn’t going to back down in any situation,” said Woody Beard, Darwin’s high school basketball coach. “He was a team guy, raised that way, that didn’t make excuses and just expected to do what he had to do to help the team win.”

Darwin was part of one the most accomplished athletic classes to go through Pisgah High School. The 2004 PHS alum played key roles in helping Pisgah reach the state semifinals in baseball, basketball and football during his junior and seniors seasons.

“He loved football and he loved basketball,” Paige said, “but baseball was his knack.”

Matthew, a two-time all-state baseball player, was the ace of the Pisgah pitching staff. His career record on the mound was 27-6 with 294 strikeouts, including a 12-1, 90-strikeout senior season in which he boasted a 0.78 ERA while helping lead the Eagles to the Class 2A state semifinals.

“Matthew was the most dominant pitcher I ever coached,” said Dwight Griffith, who was Darwin’s high school baseball coach from 2001-04. “Matthew could just go out there and dominate. When he pitched, you just felt like you were going to win that game. The whole team fed off that.”

Matthew, who also batted .419 with five home runs and 26 RBIs his senior season, had numerous scholarship offers, including ones from Alabama, Auburn and Florida State. But he elected to stay close to home and sign with Jacksonville State.

“He was a daddy’s boy,” said Paige of her and Darwin’s father Jim, who died in 2009 from complications from kidney issues. “That’s why he went to Jacksonville (State), because he could come home anytime and see his daddy.”

Ironically, Darwin’s first collegiate start came against Alabama. On a Wednesday night in Tuscaloosa in March 2005, Darwin scattered three hits over five shut-out innings against the Crimson Tide. He was in line to get the win until Alabama rallied against JSU’s bullpen in the late innings, leaving him with a no decision.

“That was a proud moment for us,” Pam Darwin said. “Such an exciting moment.”

Darwin pitched for the Gamecocks for two seasons before an arm injury ended his career. He pitched in 32 games, making 26 starts and posting an 8-4 career record with 74 strikeouts in 132 1/3 innings pitched and a 4.56 ERA. Darwin made starts against the likes of Alabama, Vanderbilt and a then-No. 1-ranked Mississippi State.

“I’d ask him ‘how are you not nervous against (teams of that caliber)?,’” Paige Darwin said. “But he loved it. He was always somebody that wanted the ball when the game was tough. He liked the challenge.”

Hokes Bluff native Mitch Miller was Darwin’s teammate at JSU for two seasons. He said the team knew what they were getting when Darwin went to the mound.

“He was about as consistent as anyone,” Miller said. “He was going to throw strikes and get people out. He just had a great competitive spirit and a grit to win.”

That date is seared into Paige’s mind. It was the day her brother’s life and her families' lives changed forever.

That is the date that Darwin suffered a head injury in an ATV accident. He never fully recovered and required round-the-clock care. For 12-plus years, Pam, her late husband Jim, Paige and other caregivers lovingly cared for him.

“It was unexpected,” Paige said. “He wasn’t sick. We just figure his heart gave out. He went to sleep and just stayed asleep.”

Matthew was buried the following day after a very small funeral service.

“For 12-and-a-half years, I did everything I could to make him comfortable,” Pam said. “I’m heartbroken, but I wouldn’t bring him back for anything because he’s a in a better place and he’s in Heaven with his daddy. That really helps me get through the day.”

The COVID-19 (coronavirus) pandemic limited the number of people who could attend his funeral and pay their respects. But scores of people reached out to the family after hearing the news, and many shared memories and stories about Darwin — Darwin the friend, the athlete and fun-loving mischievous jokester — with them via phone calls, text messages and social media.

“That let me know how much he was loved,” Pam said. “That comforted my heart.”

“It’s almost like a second death,” Paige said. “Even though he wasn’t the same Matthew we all knew, it’s like mom said, ‘you could still see him in body, touch him.’ But we have a lot of memories. A lot of people have lot of memories (of him). He would want people to remember him as the Matthew he was, and not the Matthew after the accident.”

For many that knew him, their memories are of Darwin fun-loving, prankster ways. Others remember him standing on the mound, staring down a batter. Some will remember him running down the sideline on a long touchdown catch against Lineville in the state football semifinals. For others, it’s his defensive effort shutting down and frustrating an opposing basketball team’s best offensive player.

Beard admires how Darwin responded from a difficult situation his sophomore season in the Northeast Regional finals at Jacksonville State University. Darwin stood at the free-throw line with no time left on the clock in the biggest game of his career thus far. With Pisgah trailing Geraldine by two, Darwin was fouled while shooting a 3-pointer as time expired. He made the first two foul shots to tie the game. But the third one did not go in, sending the game to overtime. Geraldine ultimately edged Pisgah for a regional championship and a berth in the Class 2A state tournament.

While most fans marveled that a sophomore had enough poise to make to free throws to tie the game in such a pressure-packed moment, the competitor in Darwin focused on the one he missed.

“That was a tough situation, and he put us in position to win that game by hitting two of those free throws,” Beard said. “But he didn’t see it that way, because he thought he should’ve gotten it done. But he was (motivated) by that. The next year, we’re back there (in the regional finals) and him and those guys are making plays, leading us, and he’s talking about ‘we’ve been here, we will do this.’ He was just a winner. It was so fun to be around him and that whole group. A lot of good memories.”

Aside from being teammates at JSU, Miller spent a summer living with Darwin and his family as the two worked third shift jobs at RTI in Rainsville.

“Matthew and I got to be really close,” Miller said. “I was honored to know him, to be his friend.”

Paige remembers him as a good big brother, one she could always count on. To Pam, the “big things” she remembers about her son was his big heart, his willingness to help anyone, his love for life, and of course, that “mischievous grin” came to love.

“Everybody knew about that mischievous grin,” Paige said with a laugh. “He’d pull a prank on you, and then he’d have that grin on his face. You knew he did it, and he knew you knew he did it. He couldn’t hide it. I’ll never forget that (grin).”