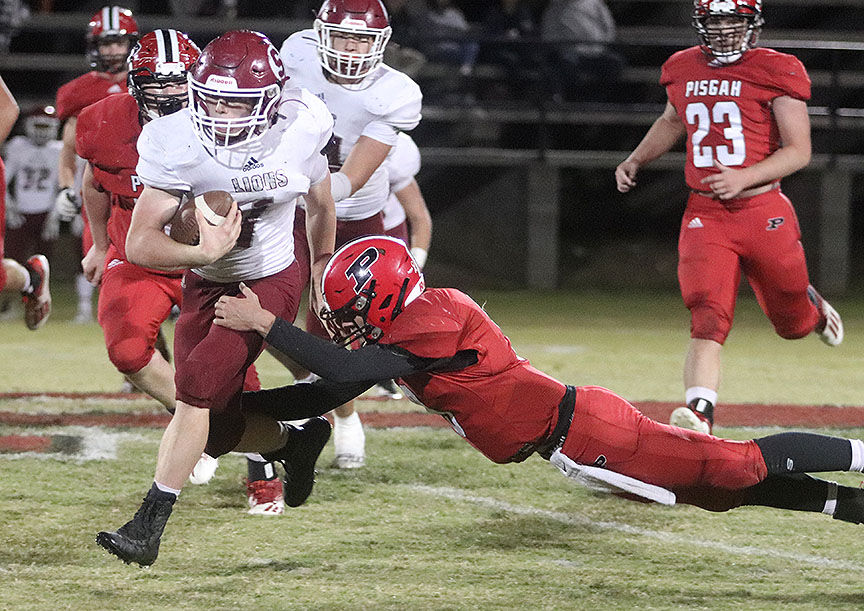 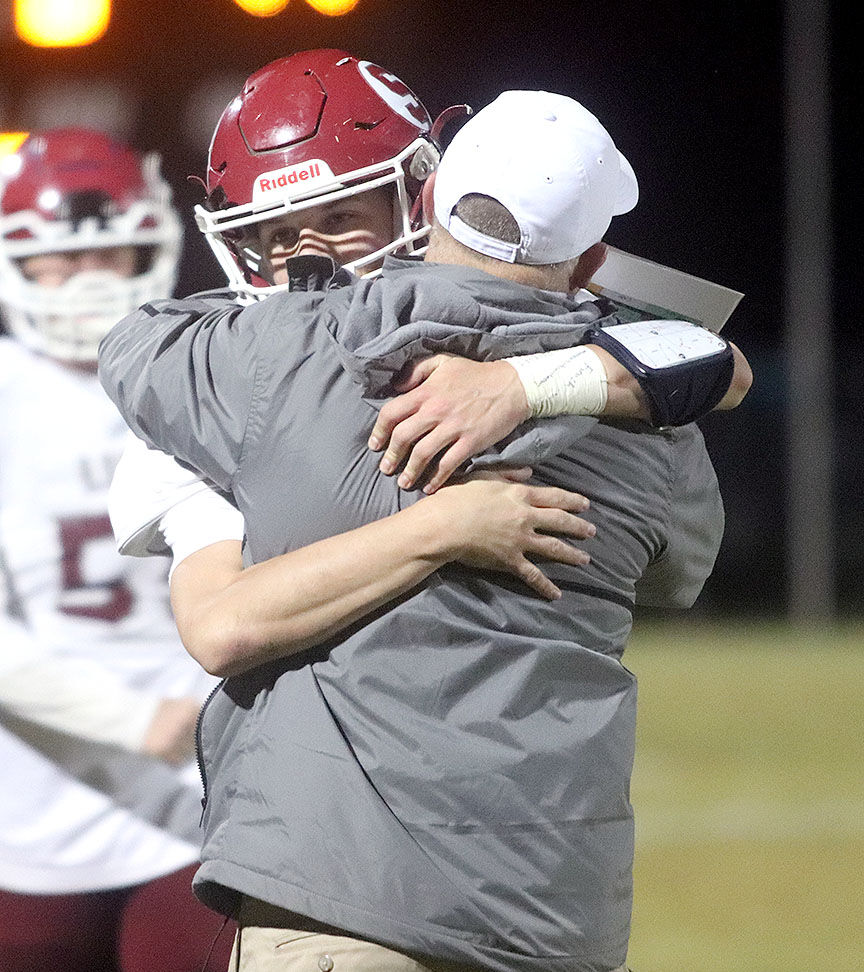 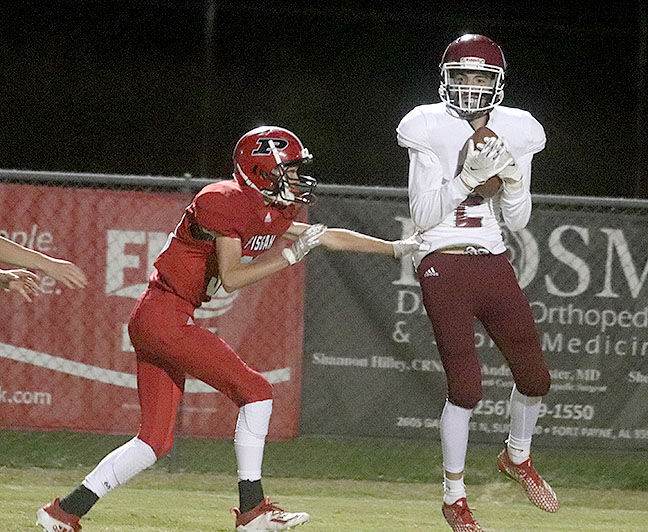 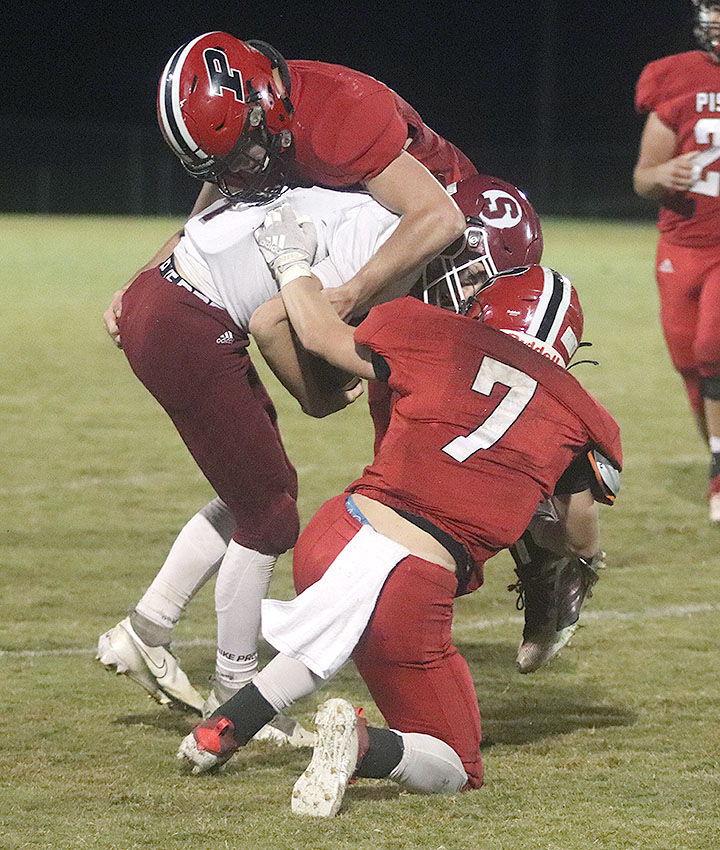 Jace Holcomb fights for just enough yardage for a first down after scooping up a bad snap on a punt as Pisgah's Caiden Hawkins and Fox Tinker (7)bring him down during Section's 25-14 win. 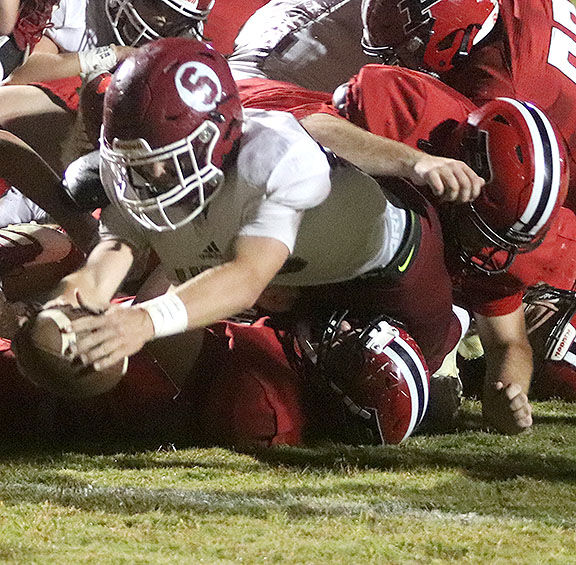 Drake McCutchen stretches the football across the goal line for a touchdown during Section's 25-14 win over Pisgah.

Jace Holcomb fights for just enough yardage for a first down after scooping up a bad snap on a punt as Pisgah's Caiden Hawkins and Fox Tinker (7)bring him down during Section's 25-14 win.

Drake McCutchen stretches the football across the goal line for a touchdown during Section's 25-14 win over Pisgah.

On a cold night on Sand Mountain, Section earned its first playoff appearance since 2007, knocking off county rival Pisgah 25-14.

The visiting Lions controlled the game with strong running and a defense that caused three turnovers.

Section head coach Chris Hammon said he was excited for his team, which improved to 5-3 overall and 4-2 in region play to secure the third spot in Class 2A, Region 7.

“Our guys bought in, worked hard over the summer and put in the time and effort,” he said. “Hopefully, they realize now what hard work shows. I am just proud of our guys, the community and this program.”

Section built an 18-0 lead before the Eagles scored to cut it to 18-7. Forcing a punt, the Eagles were looking to get closer, and the chance seemed to present itself when after a high snap on a Section punt.

But Jace Holcomb gathered the loose ball and was able to pick up a first down.

“That was just a senior winner making a play,” said Hammon.

Both teams traded possessions to start the game, and then the Lions took over and never looked back.

“They just made more plays than we did,” said Pisgah head coach Luke Pruitt, whose team fell to 2-6 and must beat Tanner on the road next week to secure a playoff spot.

Section’s first score covered 33 yards in six plays as Jace Holcomb capped it with a one-yard score. The PAT failed, but the Lions led 6-0 after the first quarter.

Pisgah threatened in the second quarter, moving to the Section 26 before fumbling the ball away. Section got its second score, building a 12-0 halftime lead. The Lions drove 55 yards, capped by a three-yard touchdown run by Drake McCutchen.

Section pushed the lead to 18-0 in the third quarter when Jace Holcomb scored his second touchdown on a two-yard run.

Pisgah fought back, marching 52 yards on its next possession. Parker Law capped the drive with a one-yard touchdown run. John Burke kicked the PAT to cut the lead to 18-7 with 3:35 left in the third quarter.

Section answered right back, driving 65 yards. Jr. Walker highlighted the drive with a 26-yard run, and then scored on a 10-yard run. Alex Guinn kicked the PAT, pushing the lead to 25-7 with 10:09 left.

Pisgah was able to cut into the lead on its next possession, driving 47 yards, highlighted by a 31-yard completion from freshman quarterback Mason Holcomb to Law at the Section two-yard line. Freshman Fox Tinker scored on the next play, from two yards out. Burke’s PAT cut it to 25-14 with 7:23 left.