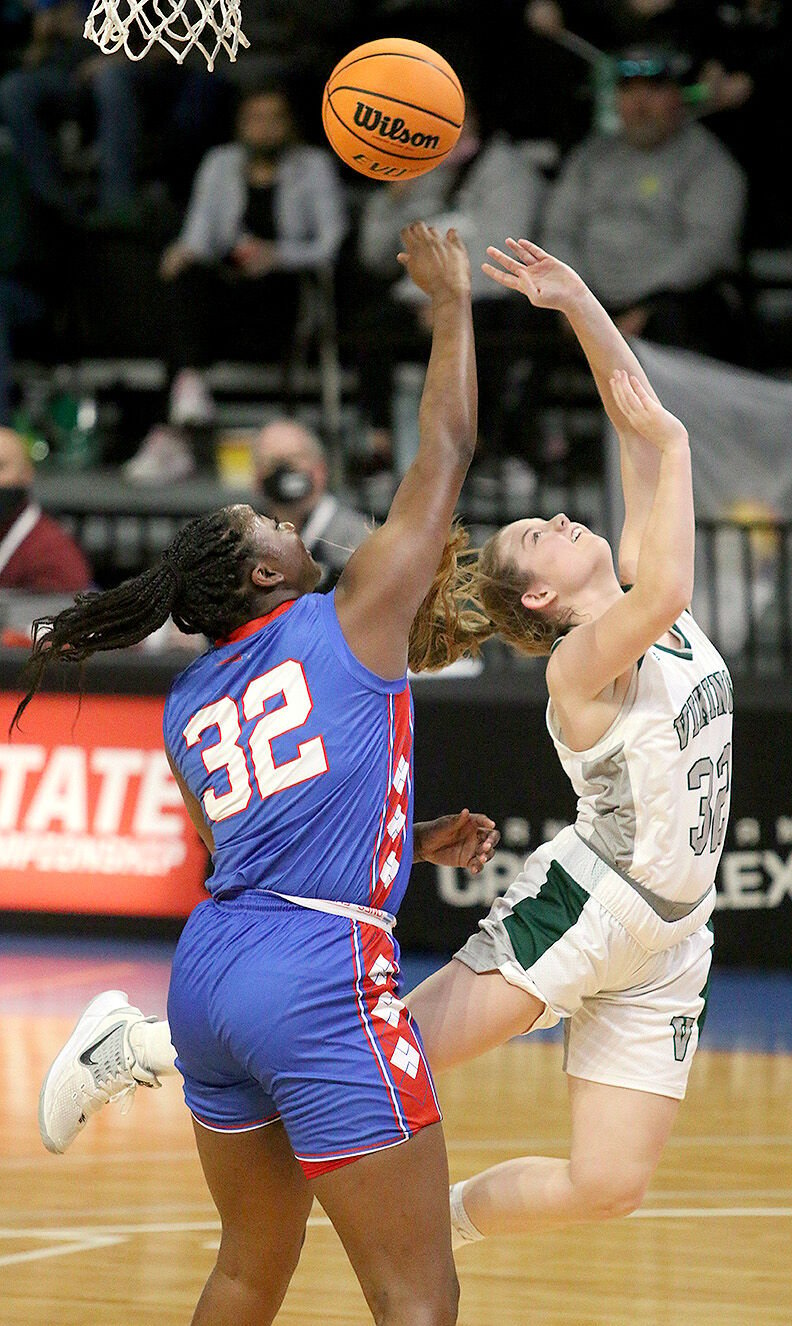 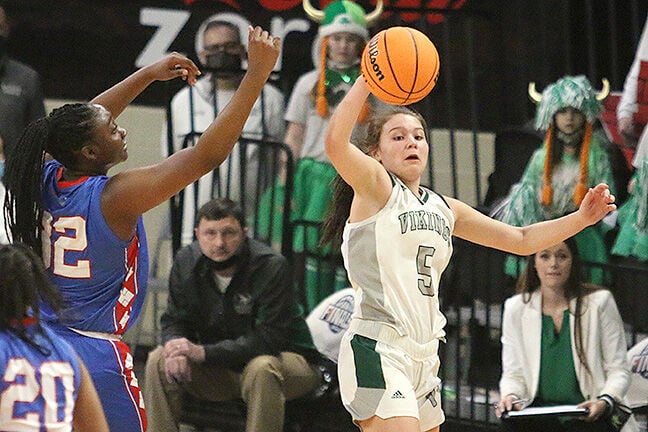 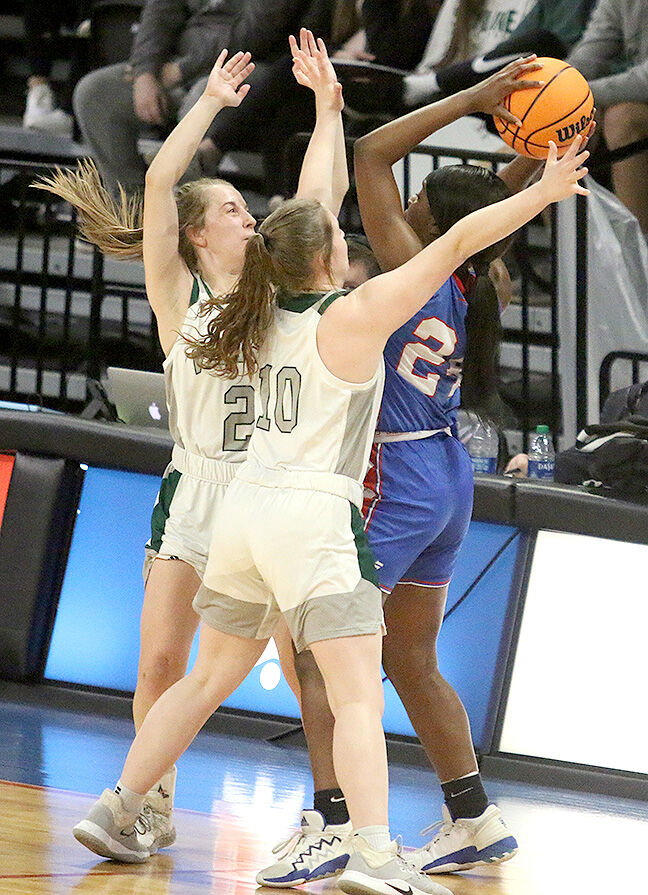 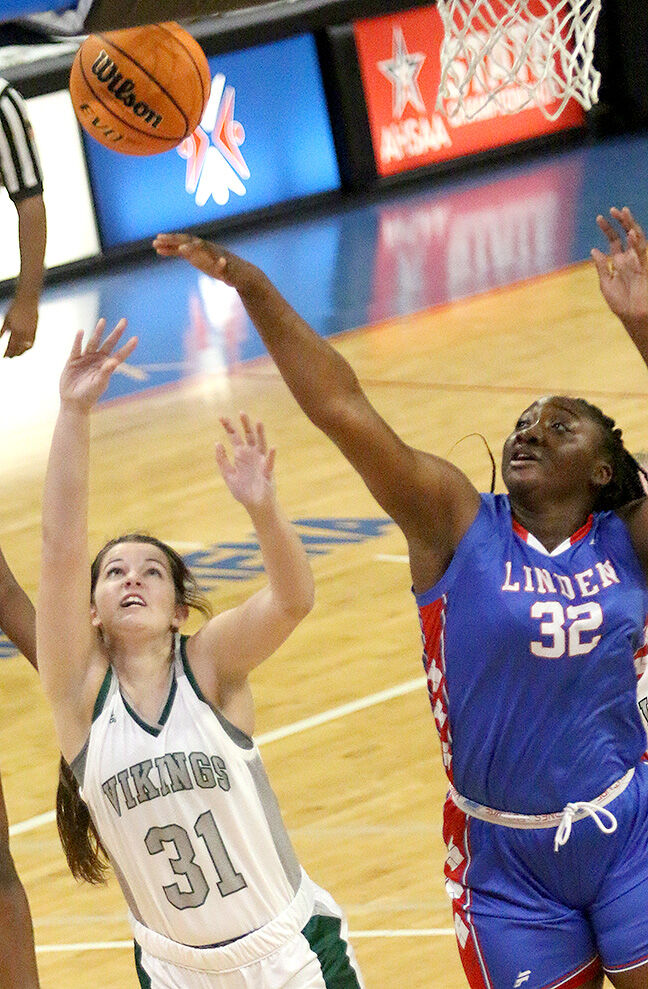 Lexie Stucky (31) scores a basket on a putback as Linden's Timya Thurman tries for the block during Skyline's 60-38 Class 1A State Semifinal win on Tuesday.

Lexie Stucky (31) scores a basket on a putback as Linden's Timya Thurman tries for the block during Skyline's 60-38 Class 1A State Semifinal win on Tuesday.

There wasn’t much of a celebration after the Skyline varsity girls basketball team defeated Linden to secure a spot in the Class 1A Girls Basketball state championship game.

Instead, the Vikings had the look of a team focused on its primary mission.

The top-ranked ranked Vikings shook off a slow start and rolled past Linden 60-38 in a Class 1A Girls State Semifinal game on Tuesday at the Bill Harris Arena in Birmingham.

“They thought all year this is what we’re supposed to be playing for,” said Skyline head coach Ronnie McCarver said. “They've play hard all year and I'm hoping we can play like that one more game.”

After trailing 12-11 after one quarter, Skyline quickly regained the lead in the second quarter and never trailed again.

The Vikings made just 22 of 63 shots, but made up for an uncharacteristic shooting performance by connecting on 10 3-pointers. Skyline also scored 23 points off of 31 Linden turnovers.

"We weren't getting a lot out of the (full-court) press because they were just throwing it up high to (Thurman)," McCarver said. "We went to the half-court trap in the second quarter. We made them turn it over some. That kind of got us going."

Skyline scored seven points in the final 1:15 of the first half on layups from Rowell and Gracie Stucky and Bellomy's 3-pointer to build a 33-20 halftime lead. Another Bellomy trey gave the Vikings an 18-point lead midway through the third quarter, and they ultimately carried a 45-29 lead into the fourth quarter. Linden never got closer than 14 in the fourth quarter.

Skyline's victory tied the single-season school record for wins with the 2018-19 team.

Next up for Skyline is a Marion County team coached by Scott Veal, who was Phillips' head coach in 2019 when Phillips defeated Skyline in the 1A state finals.

"Me and (Veal) are big buddies," McCarver said. "It's for bragging rights. Last time we had a big lead in the fourth quarter and blew it. Hoping this time we can do something a little different."

Marion County defeated No. 3 Samson 58-34 in Tuesday's other 1A semifinal. Eighth-grader Serinity Metcalfe scored 23 points for the Red Raiders while Cara Sullivan had 11, Erin Culp had seven points and 16 rebounds and Madison Stewart had nine points, seven assists and five steals.

"It'll be tough. They've got a good team," McCarver said. "They'll press, shoot the 3 pretty good. Got the girl inside that's pretty big that we'll have to do a good job on."

Senior Gracie Stucky, the lone returning starter from Skyline's 2019 state runner-up team, is excited for the Vikings to get another shot at winning a state championship.

"It means a lot to me," she said. "Two years ago, we came here and made it to the finals and lost. I think we've got a lot to prove to everybody this year. I think we can do it."