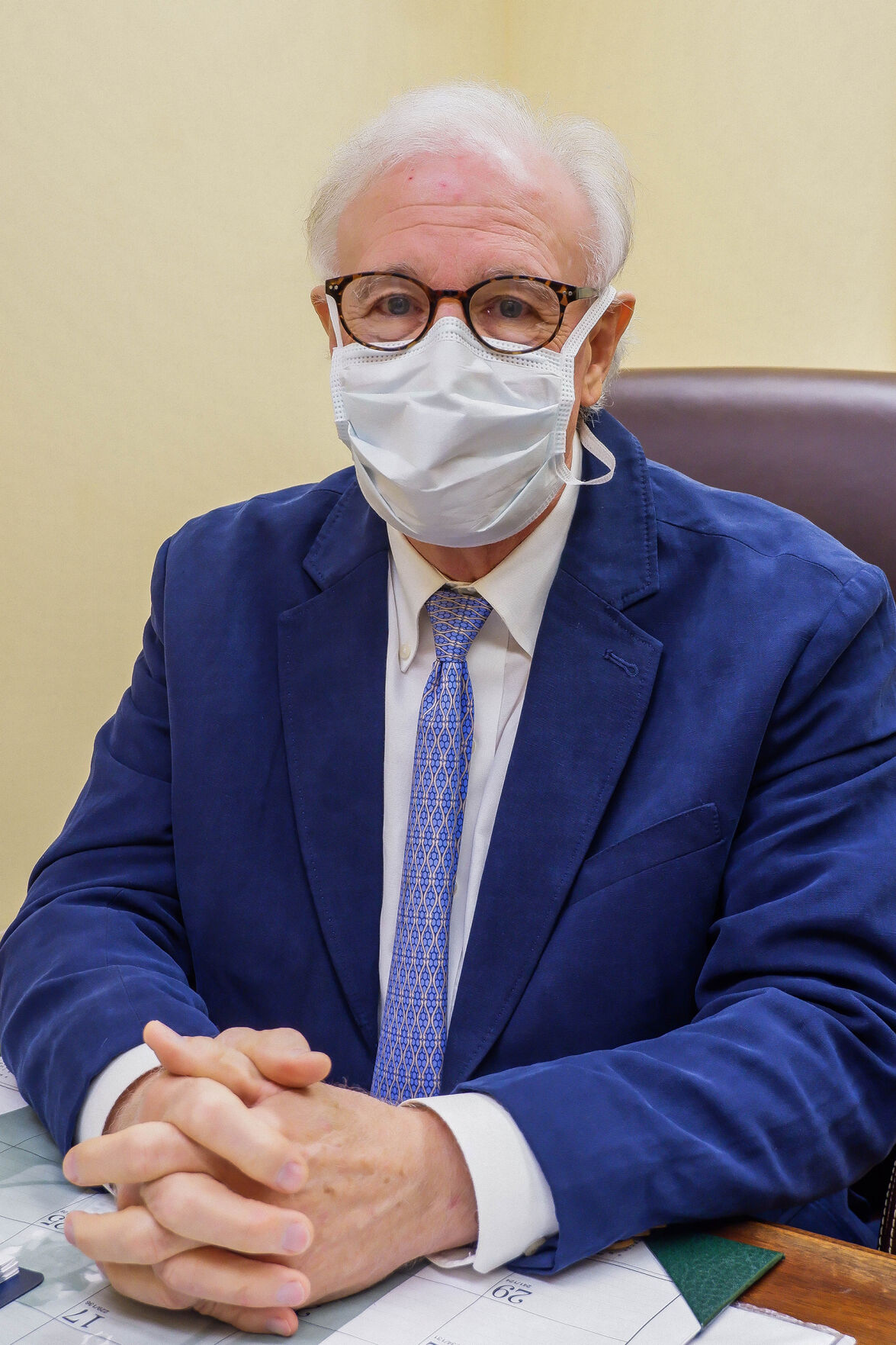 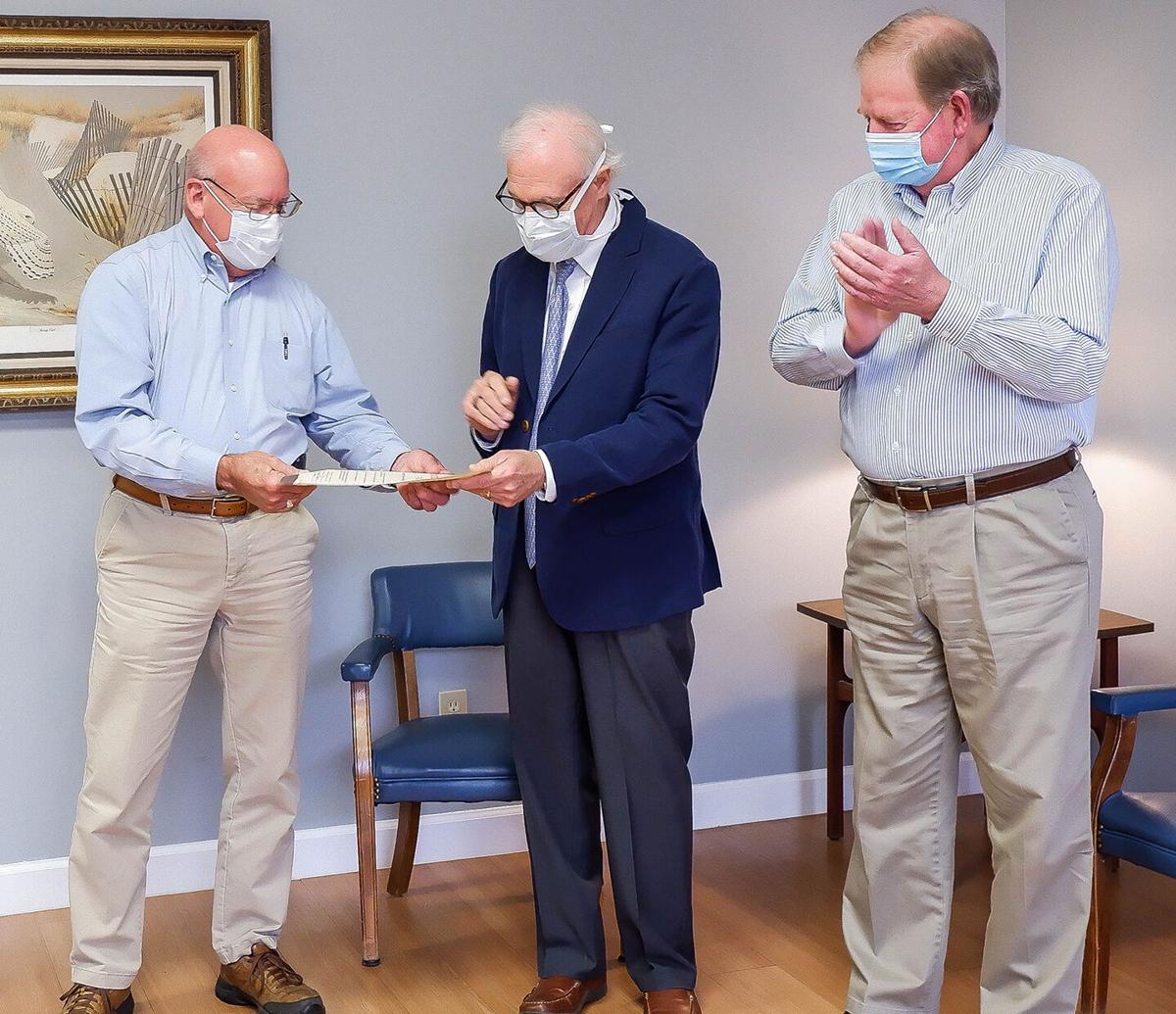 Scottsboro Mayor Jim McCamy and city council member Mike Ashburn present Dr. Durwood Hodges Jr. with a proclamation given his honor for 40 years of service, commitment, dedication and leadership to the city of Scottsboro. 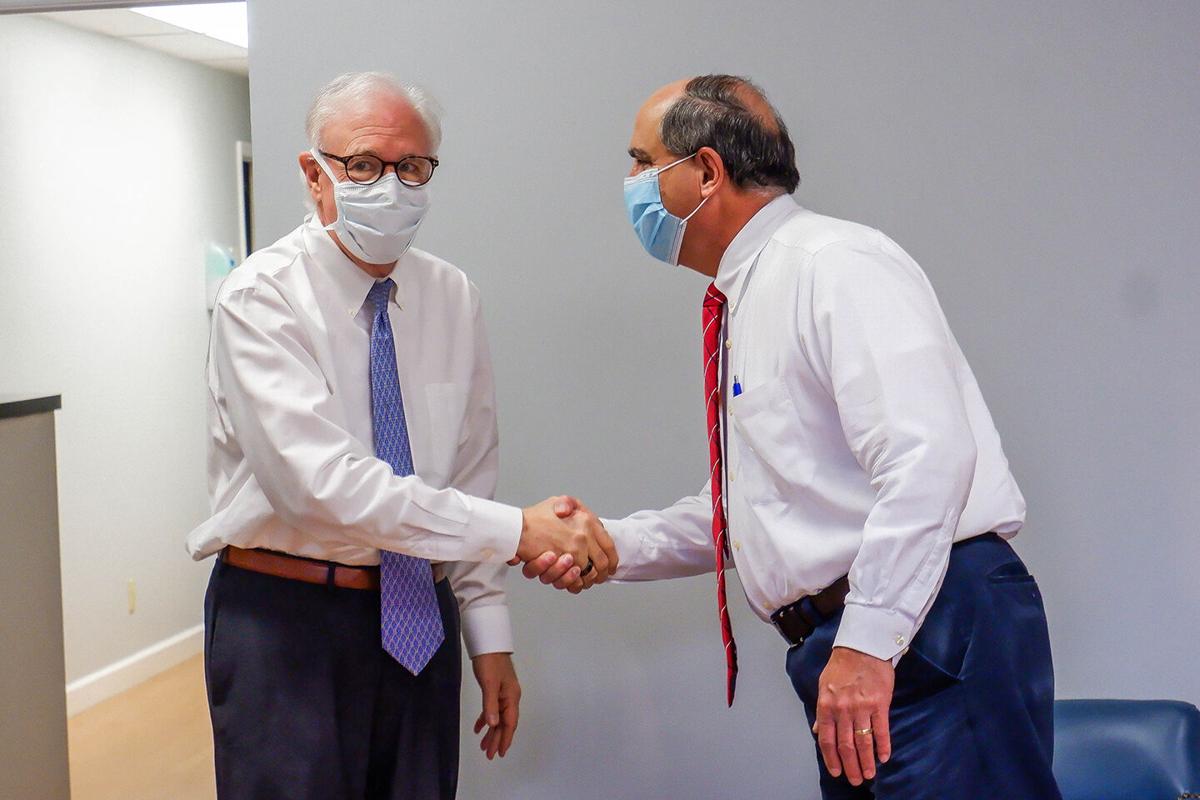 Scottsboro Mayor Jim McCamy and city council member Mike Ashburn present Dr. Durwood Hodges Jr. with a proclamation given his honor for 40 years of service, commitment, dedication and leadership to the city of Scottsboro.

Sitting in his office as the remaining days of operating his medical practice dwindle down, Dr. Durwood Hodges Jr., is soft spoken and reflective while he thinks about the many years he has spent treating patients there on Parks Avenue in Scottsboro.

As a fourth generation physician, it’s not just his own 40 years Hodges has to think about. Hodges’ family has been a major part of the medical community in Jackson County for almost a century.

“I had a great grandfather that was a physician in Woodville. My grandfather, Dr. Rayford Hodges, started the first hospital here in 1923 on the top floor of the Brown Building. He started it with another physician he met in World War I, Dr. George Nye,” Hodges said.

It was a few years later in 1925 when Hodges’ grandfather and Dr. Nye built Hodges Hospital, which was located on Laurel Street.  This was the first true free standing hospital in Jackson County.

“Dr. Nye left after a couple of years, and my grandfather bought him out and ran it himself from 1925-1958,” Hodges said.

Hodges’ father, Durwood Sr., was also a physician and after he completed medical school he and his family returned to Scottsboro.

“We came back here in 1956, and my grandfather and dad practiced together until my grandfather died in 1965 of a heart attack,” Hodges said. “My dad stayed down there (in the Hodges Hospital building) until 1971 as a clinic. They closed the hospital in 1958. My father realized he couldn’t run a hospital like my grandfather did, and (the county) had the new hospital.”

“Unfortunately, I did not get to come back and practice with my dad. He died of lung cancer in 1978, and I didn’t get back (from medical school and residency) until 1981,” Hodges said.

When Hodges returned to Scottsboro he started his practice in the same office where his father left off and has carried on his family’s legacy ever since.

Asked how he was called to follow the path of that legacy, Hodges said he was never pressured to do so by the long line of physicians in his family.

“I guess it’s a feeling, watching my grandfather and father. It was something I wanted to do,” he said. “It’s one of those things, unless you want this for yourself you can’t go through this and go through what you have to do to be a doctor. You cannot do it for someone else.”

In 40 years, Hodges has experienced many wonderful moments.

“The best moments come from the people that you meet, the friendships,” he said. “If you are in family medicine you get to see generations. You deliver babies, and you watch them grow up and you watch those babies have babies. It’s the people, and not just the patients, but the wonderful staff members that I’ve had over the years too.”

As joyous as taking part in the beginnings of so many lives was, Hodges has also been with patients as they see their last days.

“The hardest part is when you have terminal patients, and you have to go through that with them and their families,” Hodges said. “It’s very difficult to lose a patient, especially when it’s our job to keep them alive and keep them going and you just realize that you just can’t do it.”

Through the years, Hodges said it has been his family that supported him through everything.

“It’s not just me being a physician,” he said. “They’ve had to be there for last minute emergencies, and they were so understanding and wonderful.”

On Tuesday, Aug. 31, Hodges was honored with a proclamation from Scottsboro Mayor Jim McCamy and the Scottsboro City Council, for his “significant accomplishments in service, commitment, dedication and leadership.”

“It’s an honor for us to be able to do this. It truly is,” said McCamy.

Dr. Lonnie Albin, chief medical officer at Highlands Medical Center, was in attendance and said, “I’ve always been amazed with the concept of how much your family has meant to this community and also the hospital … I just want to tell you what an honor it has been to be in a call group and practice with you.”

As his retirement nears, Hodges looks forward to a bit of free time.

Hodges isn’t ready to go to the house completely though, and plans to work a few days a week with Northeast Alabama Health Services and Highlands Medical Center’s new wound center.

Though he will remain active in the health care community part-time, Hodges will miss the work he has done for the past four decades.

“It’s just mainly the special people. That has been the hardest part (of retiring). When you have dedicated your life to taking care of folks, this retirement is bittersweet,” he said. “I’m looking forward to it, but you feel like you’ve kind of abandoned folks. I don’t like that feeling at all. It’s been hard. It’s not been easy to walk away after doing this. It’s been my life for over 40 years.”