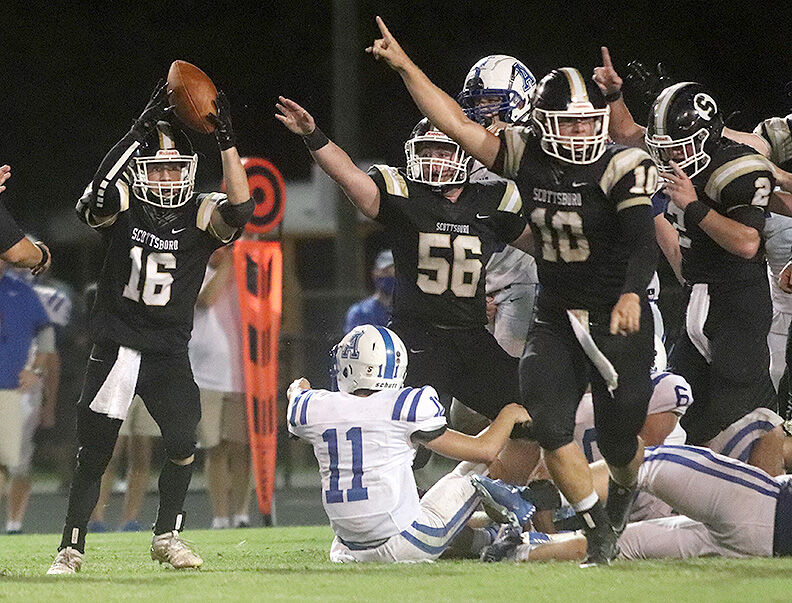 Thomas Rackler shows the football after recovering a fumble by Arab's Aidan Cox while teammates Will Dukes (56), Noah Linville (10) and Cade Holder (2) celebrate during Scottsboro's 7-3 Class 6A Region 7 victory at Trammell Stadium. 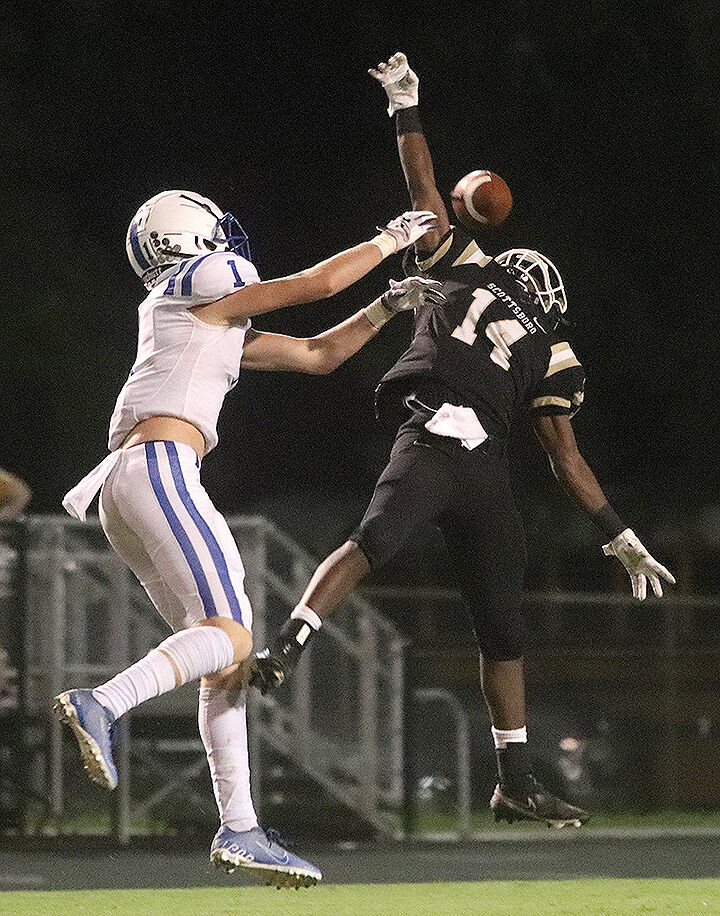 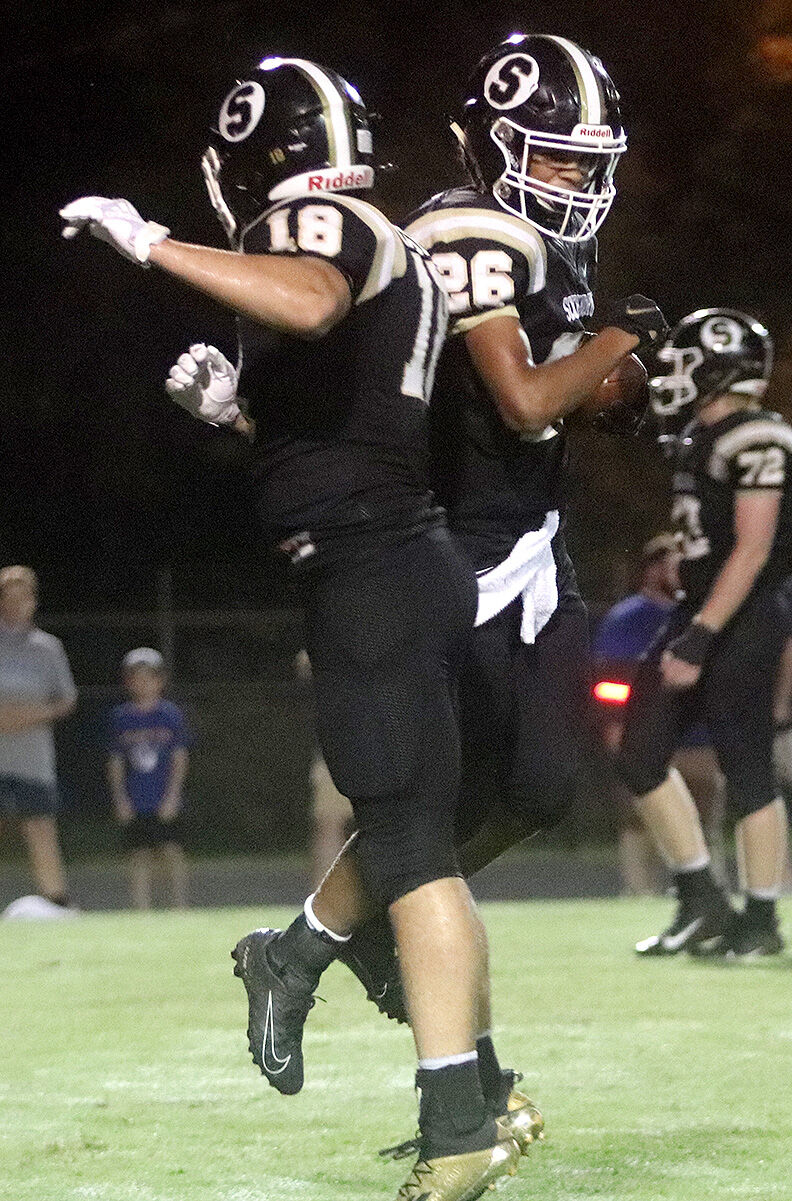 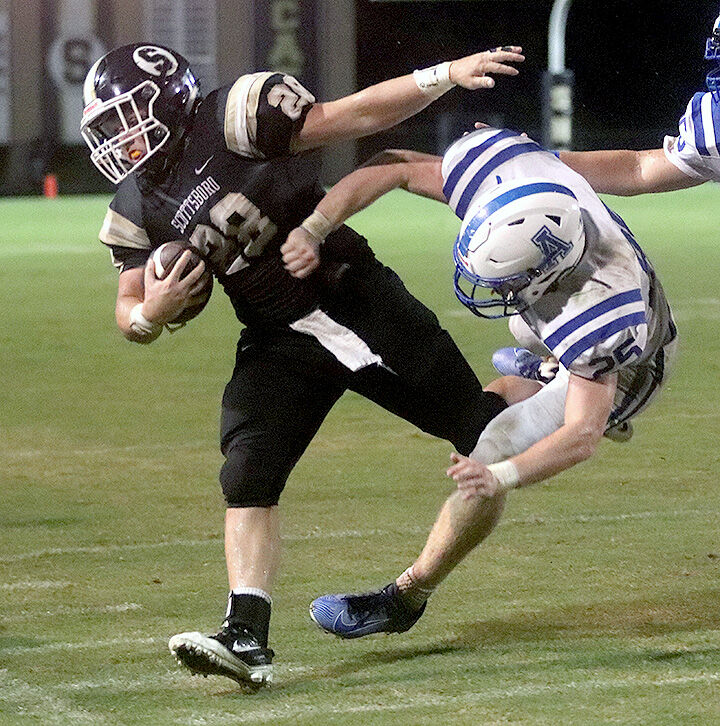 An Arab defender bounces off of Scottsboro's Jacob Manning during a running play in Scottsboro's 7-3 Class 6A Region 7 win Friday night.

Thomas Rackler shows the football after recovering a fumble by Arab's Aidan Cox while teammates Will Dukes (56), Noah Linville (10) and Cade Holder (2) celebrate during Scottsboro's 7-3 Class 6A Region 7 victory at Trammell Stadium.

An Arab defender bounces off of Scottsboro's Jacob Manning during a running play in Scottsboro's 7-3 Class 6A Region 7 win Friday night.

The 60th meeting between rivals Scottsboro and Arab was all about defense.

Scottsboro forced three Arab turnovers in the second half to preserve a 7-3 Class 6A Region 7 victory over the visiting Knights Friday night at Trammell Stadium.

It was the sixth straight win for the Wildcats against Arab as their series record advantage grew to 41-18-1. More importantly for the Wildcats, it got Scottsboro (1-2, 1-1) in the win column for the season and in region play.

“It wasn’t very pretty but it was effective,” said Scottsboro head coach Don Jacobs. “Kids did a great job. I’m awfully proud out them. That was a physical game. To come out with a 7-3 win, it’s awfully important.”

Jacob Manning ran for 151 yards on 36 carries for Scottsboro while JaVaris Branford ran for 46 yards on 11 carries. Manning was 2-of-6 passing for six yards.

Scottsboro produced its only score with 10:49 left in the second quarter when Manning capped off a 14-play, 60-yard drive with a 1-yard touchdown run and Alex Joose kicked the PAT.

Arab (1-3, 0-2) threatened to tie the game late in the first half, but after reaching the Scottsboro 13-yard line, the Knights had to settle for a Gavin Currier’s 28-yard field goal with 1:08 left in the half.

Scottsboro took the second-half kickoff and marched inside the Arab 20-yard line, but the Knights defense held and Scottsboro missed a field goal try.

The Knights then drove into Scottsboro territory on their first two drives of the second half, only to have those drives end when Thomas Rackler recovered an Arab fumble late in the third quarter and Malik Willis intercepted an Arab pass at the goal line with 5:39 left in the game.

Scottsboro drove from its own 1-yard line out to near mid-field before being forced to punt. A low snap forced Manning to try to run for the first down, but he was short, giving the Knights the ball near midfield with just over two minutes remaining.

But on the next play, Arab quarterback Aidan Cox fumbled as he was trying to elude pressure from Scottsboro’s Barclay Butler, and Scottsboro’s Sam Dukes recovered, allowing the Wildcats to run out the clock.

“Awfully proud of the defense,” Jacobs said. “To give up three points in any ball game, I don’t care if it’s college, pro, pee-wee, undoubtedly the defense did a good job. We came up with three huge turnovers (in the second half).”