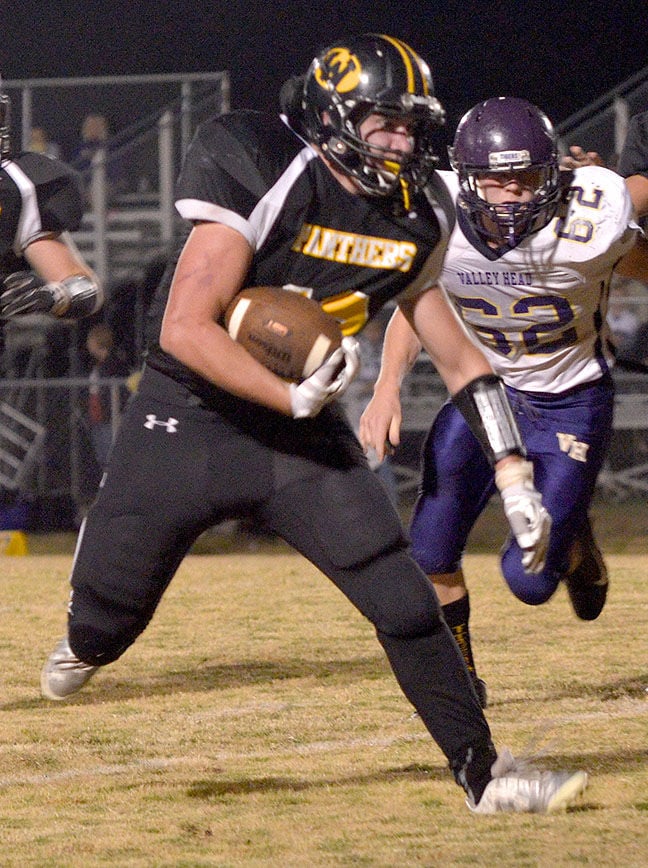 Justin Ball returned from injury to run for 177 yards and three touchdowns as Woodville defeated Valley Head 32-0 in 2015 to clinch the program's first playoff berth. 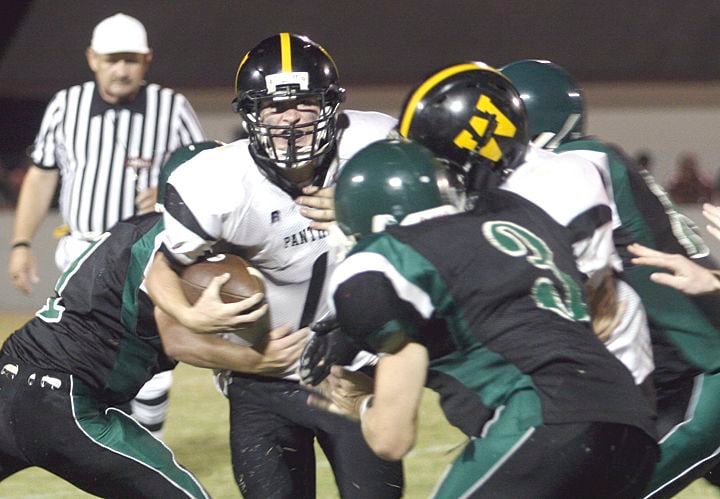 A.J. Black fights for extra yardage during Woodville's 7-6 win over Skyline in 2010, the teams' final meeting. 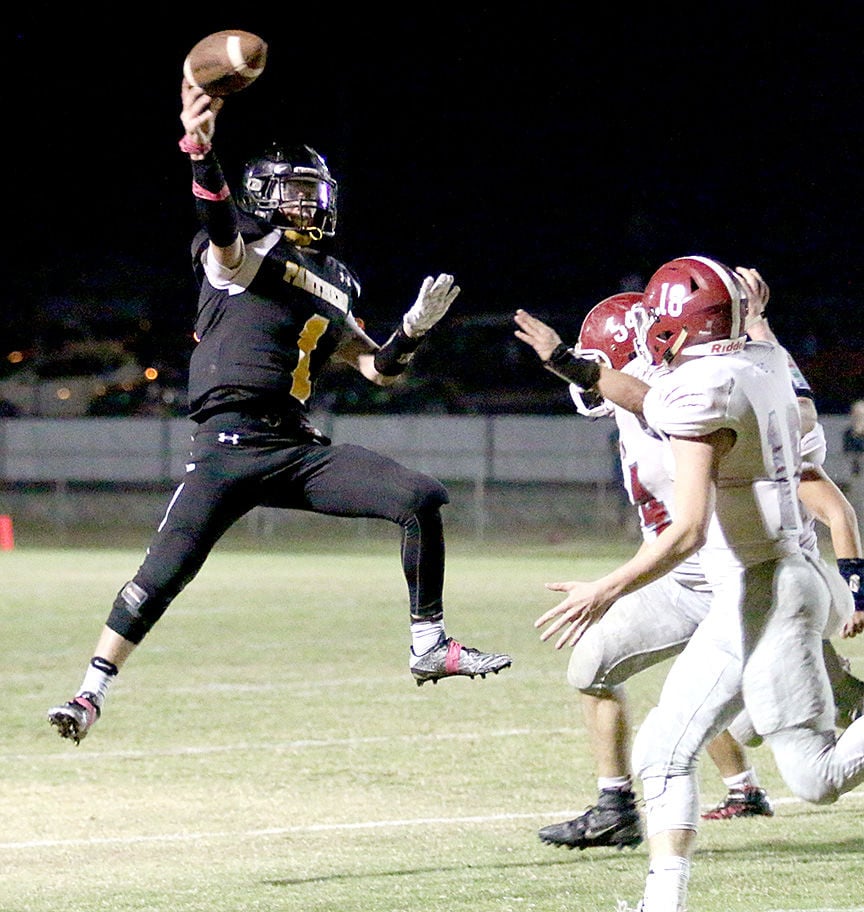 Nick Baker jumps to complete a pass during Woodville's 18-14 win over Section on Oct. 28, 2016. It was Woodville's first victory in five tries against its county rival. 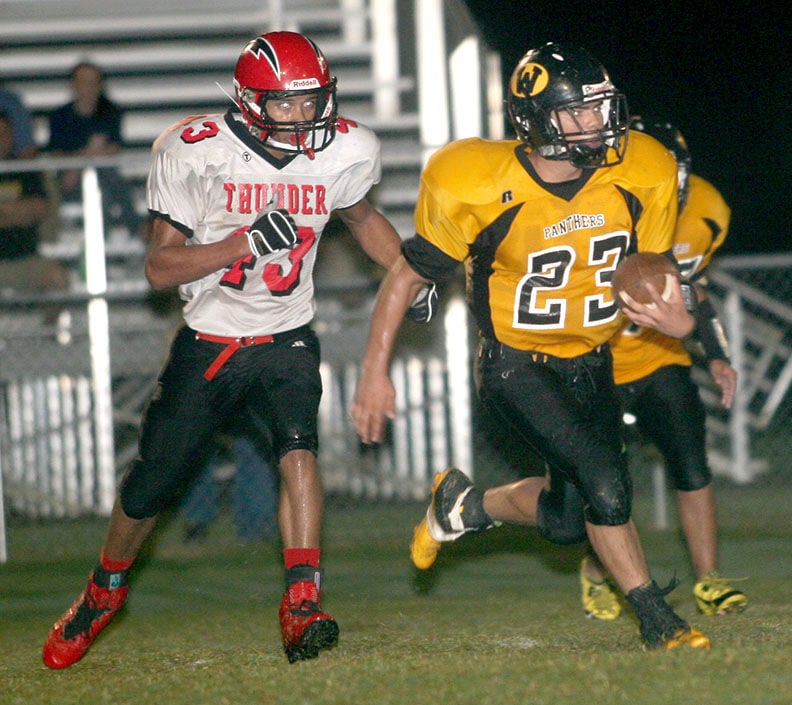 Jose Montesdeoca (23) crosses the goal line for one of his three touchdown catches as Woodville defeated Jacksonville Christian on Sept. 5, 2014 to record the program's first ever win at Frazier Field.

Justin Ball returned from injury to run for 177 yards and three touchdowns as Woodville defeated Valley Head 32-0 in 2015 to clinch the program's first playoff berth.

A.J. Black fights for extra yardage during Woodville's 7-6 win over Skyline in 2010, the teams' final meeting.

Nick Baker jumps to complete a pass during Woodville's 18-14 win over Section on Oct. 28, 2016. It was Woodville's first victory in five tries against its county rival.

Jose Montesdeoca (23) crosses the goal line for one of his three touchdown catches as Woodville defeated Jacksonville Christian on Sept. 5, 2014 to record the program's first ever win at Frazier Field.

The series begins with a look at 2010-19 decade for Woodville:

The Panthers clinched their first playoff berth with their first win in 10 tries against Valley Head. Justin Ball returned from an injury that had sidelined him for seven weeks to rush for 177 yards and three touchdowns. Nick Baker added 95 yards and a touchdown on eight carries and Kendall Collier had a 4-yard touchdown run. JR Baisden and Collin Cash each had nine tackles and Joseph McGehee added eight while Ball recovered a fumble.

“It’s exciting to make school history. For us, it’s a real big deal,” said Woodville head coach Jay Powell. “We’re just proud for the school, the community, the kids and everybody that’s contributed to this through the years.”

Woodville ended a 37-game on the field losing skid (it did get two forfeit wins during the span) dating back to 2010. Woodville gave new head coach Jay Powell a winning debut with the program. The win was also Woodville’s first on-field victory against a team other than Skyline.

Woodville prevailed in the final game between the schools to claim the series’ all-time lead 3-2. Grant Ball’s 75-yard touchdown run and PAT in the first quarter proved to be the winning score. The win gave Franklin Pritchett a win in his coaching debut with the program while ending Woodville’s 14-game losing streak. The teams were scheduled to play a non-region game six weeks later but Skyline has to shutter its program after Week 3 because of a dwindling roster.

Woodville scored a school-record 71 points in the region win, and the game is the eighth-highest scoring games in AHSAA history. The game essentially clinched a playoff berth for the Panthers, who had 482 rushing yards and 522 total yards. Jackson Peek ran for 207 yards and five touchdowns and Da’Vion Johnson had 191 yards and three rushing touchdowns. Johnson also caught at touchdown pass and had a kickoff return for a score. Woodville led 50-26 at halftime, but Coosa Christian got within 57-56 in the third quarter before Woodville scored the final two touchdowns in the fourth quarter.

Woodville recorded its first win in five tries against Jackson County rival Section, also winning the teams’ first meeting at Woodville’s Frazier Field. The Panthers took an 8-0 lead in the third quarter on Nick Baker’s 4-yard touchdown pass to Jackson Peek and his two-point conversion pass to Collin Cash. Justin Ball’s 27-yard field goal gave the Panthers an 11-0 lead in the fourth quarter. Section scored on its next two possessions to take a 14-11 lead, but Woodville’s Angel Montesdeoca scored the game-winning touchdown on a 54-yard run with 4:12 remaining.

The win was Woodville’s historic first victory at Frazier Field, which had opened three years earlier in 2011. The victory also ended Woodville’s 39-game region losing streak with its first win over a region opponent since the 2008 season. Nick Baker was 8-of-10 passing for 175 yards and three touchdowns while Justin Ball, Devin Mason and Jose Montesdeoca all scored two touchdowns each.

Woodville won in thrilling fashion in overtime to put itself in the playoff chase on the way to eventually earning the region’s No. 4 seed. R.A. Hubbard took a 28-22 lead after scoring first in overtime, but Woodville stopped the Chiefs’ two-point conversion try. Woodville, facing fourth-and-goal from the 10-yard line, scored on Jackson Peek’s touchdown pass to Da’Vion Johnson. On the ensuring PAT attempt, a low snap forced Peek, the holder, to take off running for the end zone. He ran through a tackler for the winning two-point conversion.

The win was the first true road region victory in Woodville history. A defensive play proved to be the difference in an offensive shootout, as Woodville won in overtime when Nick Baker broke up a Jacksonville Christian pass on a game-tying two-point conversion attempt. Baker finished 10-of-15 passes for 292 yards and four touchdowns, three of which went to Jose Montesdeoca (five catches for 220 yards).

After starting 0-3 in region play, Woodville won its third consecutive region contest to clinch a playoff berth as the region’s No. 3 seed. Nick Baker’s converted a fourth-and-four to Coosa Christian 1-yard line, setting up Angel Montesdeoca’s game-winning 1-yard touchdown run with 1:16 remaining. Coosa Christian hit two long passes to reach the Woodville 27-yard line on its ensuing possession, but defensive back Adam Ramirez sealed the win for Woodville with an interception with 41 seconds left in the game.

In a game that featured 10 combined turnovers, Woodville rallied from a 10-point second-half deficit to win its second straight home game against its county rival. Section took a 24-14 lead with 5:50 left in the third quarter, but Woodville pulled within 24-21 on Jackson Peek’s 1-yard touchdown run. Peek then threw a 20-yard touchdown pass to Blake Frazier for a 27-24 lead before Da’Vion Johnson added a 2-yard touchdown run with 8:41 remaining. Frazier, Peek, Carlos Torres and Blake Lands all had interceptions for Woodville.