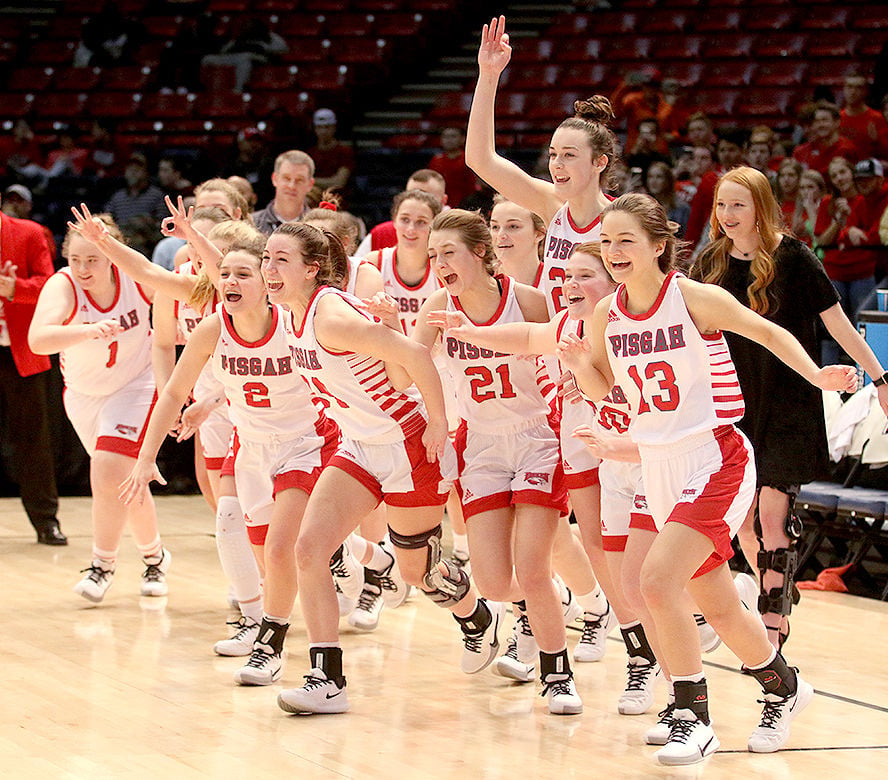 Pisgah players rush to mid-court to get the Class 3A state championship trophy after defeating T.R. Miller 59-52 in the state finals in Birmingham on Friday. 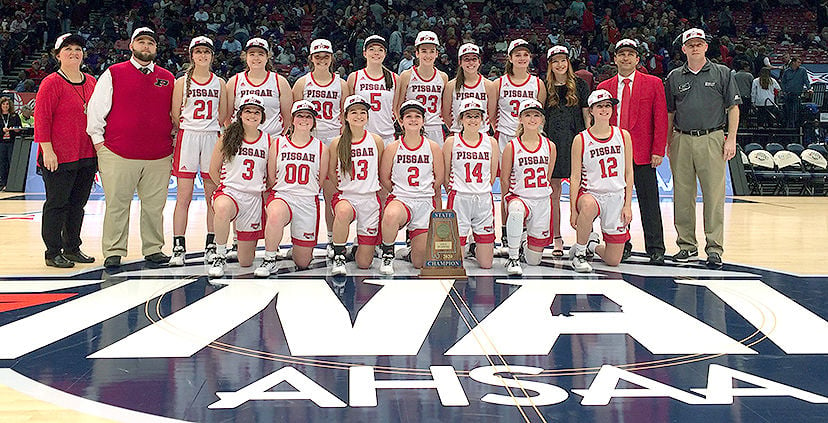 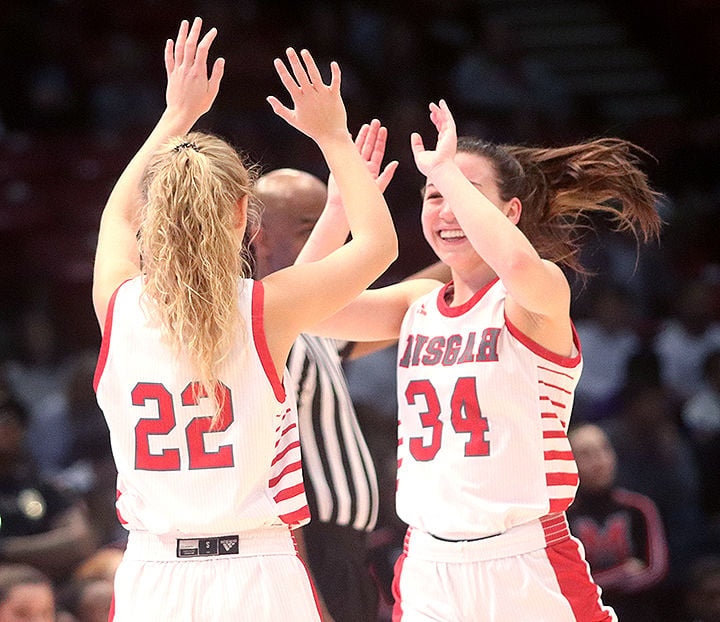 Pisgah seniors Madison Myers (22) and Chloe Womack celebrate in the final seconds of Pisgah's 59-52 Class 3A state championship game win over T.R. Miller on Friday at the Birmingham-Jefferson Convention Complex.

Pisgah players rush to mid-court to get the Class 3A state championship trophy after defeating T.R. Miller 59-52 in the state finals in Birmingham on Friday.

Pisgah seniors Madison Myers (22) and Chloe Womack celebrate in the final seconds of Pisgah's 59-52 Class 3A state championship game win over T.R. Miller on Friday at the Birmingham-Jefferson Convention Complex.

He also knew it meant his team needed a fast start to prevent T.R. Miller from playing its style of basketball.

“We couldn’t let them jump out there and go to that delay game,” Ellison said.

Pisgah’s fast start in the finals kept T.R. Miller from going slow, and the result was another Pisgah state championship.

The No. 2-ranked Eagles raced out to a 12-0 lead and held off No. 1 T.R. Miller’s second-half charge for a 59-52 win in the Class 3A girls basketball state tournament championship game Friday afternoon at the Birmingham-Jefferson Convention Complex’s Legacy Arena.

It was the third consecutive state championship for Pisgah, which now boast eight all-time state crowns.

“It’s hard to really express the feeling and emotions,” said Ellison, who has led the Eagles to six state titles during his 24 seasons as head coach. “It’s been a long, hard road, but we’re blessed. Thrilled this is the way it turned out.”

The Eagles finished 31-3, their third straight 30-plus win season. Pisgah went a combined 96-5 the past three seasons while becoming the 10th program to win three-straight AHSAA state girls basketball championships.

“Not many people can say they have a three-peat, so it’s pretty amazing for us,” said senior Chloe Womack, the state tournament MVP. “I think it means so much to all of us.”

T.R. Miller had four players score at least seven points, a change from its semifinal game when Alijah Fountain and Aleria Smith combined for 42 of their 50 points. Smith had 14 points against Pisgah while Raivon Ewing had 12.

Pisgah charged out to a 12-0 lead just over two minutes into the game and ultimately led 21-7 after one quarter. A pair of 3-pointers by Hatfield and a Heard layup gave the Eagles a 29-9 lead midway through the second quarter, and Heard’s trey gave Pisgah’s its largest lead of 21 before T.R. Miller (28-2) cut the deficit to 34-16 at halftime.

The Tigers then outscored Pisgah 19-11 in the third quarter to trail 45-35 entering the fourth before pulling within 53-45 with 2:46 remaining.

But Myers hit a pair of free throws for Pisgah, and a layup from Heard and  two free throws from Tinker allowed the Eagles to close it out.

“We wanted to make sure we were making shots and playing good defense early,” Ellison said. “We schemed them up pretty good, and that was so beneficial to us early. I think we caught them by surprise a little bit. (T.R. Miller) changed momentum in the third quarter with their effort and intensity, but we fought back. That was big.”

The loss was the first for T.R. Miller since losing to Carver-Montgomery back in December.

“We already got too far down to dig ourselves out. We made it look decent at the end but that’s about it,” said T.R. Miller coach Ronald Jackson. “Pisgah spread out around the 3-point line and they shot the ball pretty well out there. By the time we made the adjustment by halftime, it was a little bit late.”

Pisgah’s pursuit a four-peat next season won’t come in Class 3A, as it drops to Class 2A.

Before “getting started” for next season, Ellison said the Eagles will savor their historic three-peat.

“I’m proud of them,” he said. “This was their opportunity to cement their legacy as champions.”