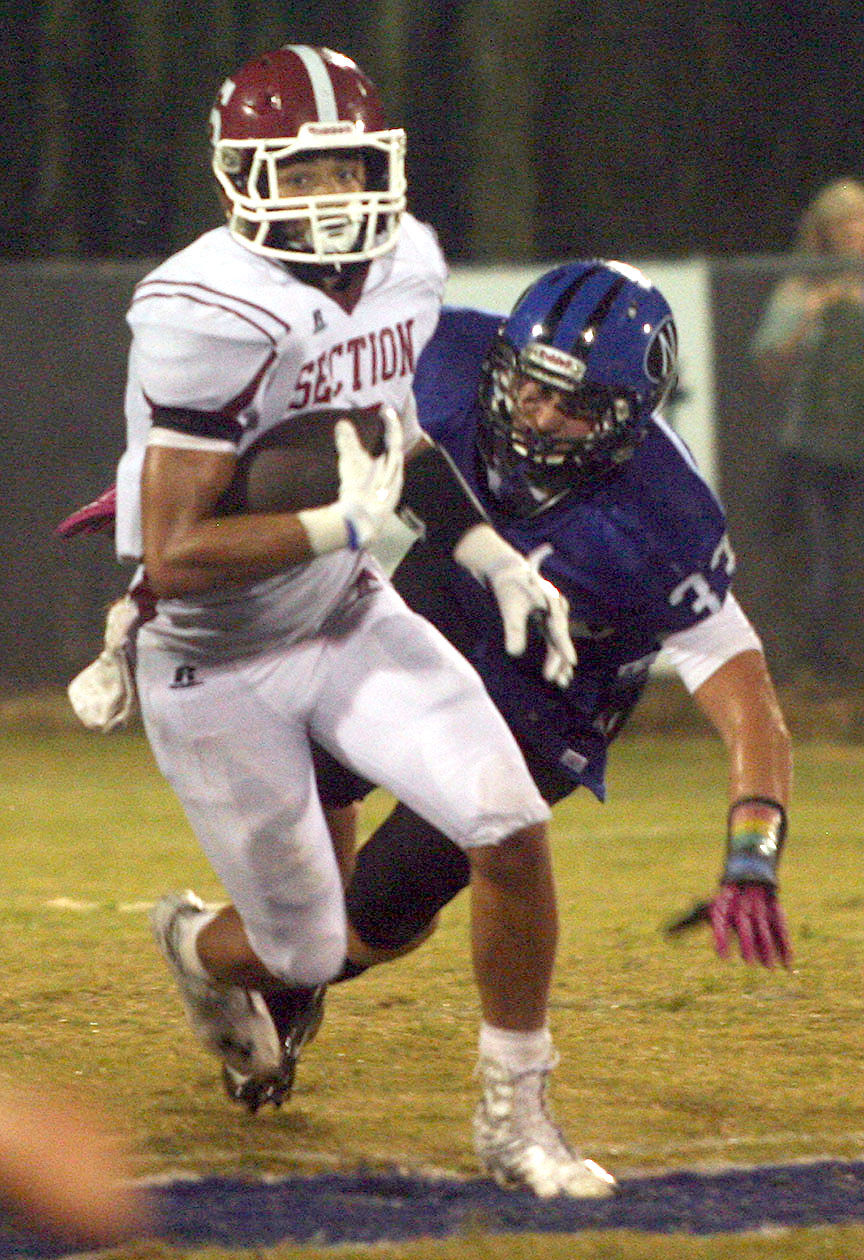 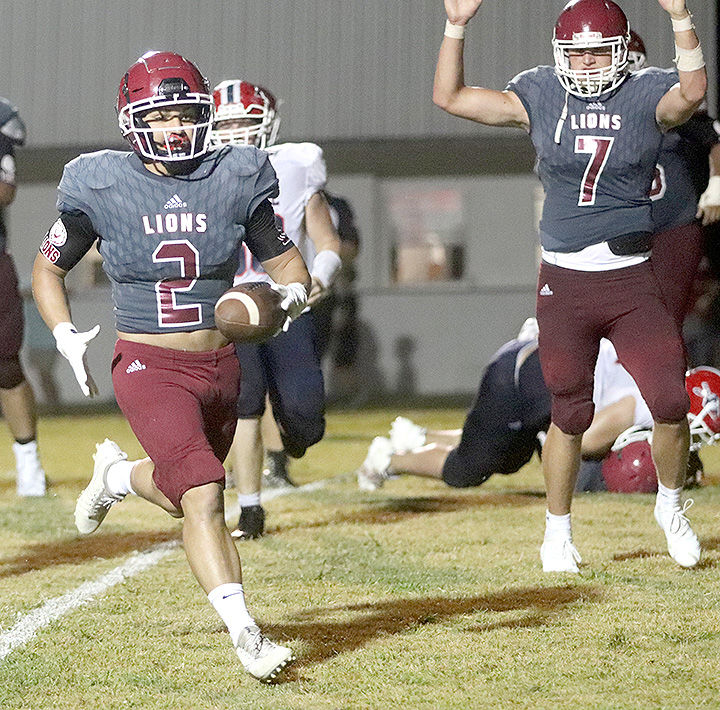 Tanner Baker (2) crosses the goal line as Caden Hicks celebrates during Section's 25-12 win over New Hope on Aug. 31, 2018, the night the program celebrated its 50th anniversary of the start of SHS football. 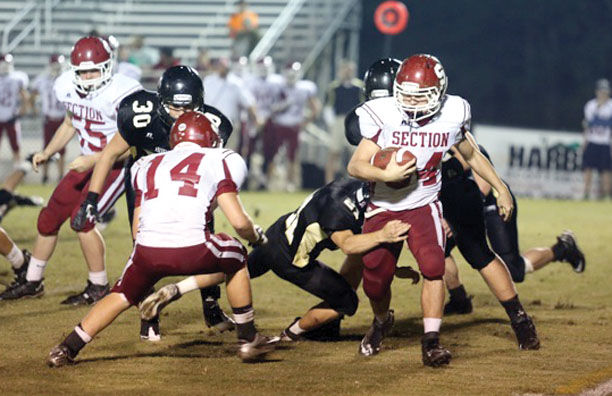 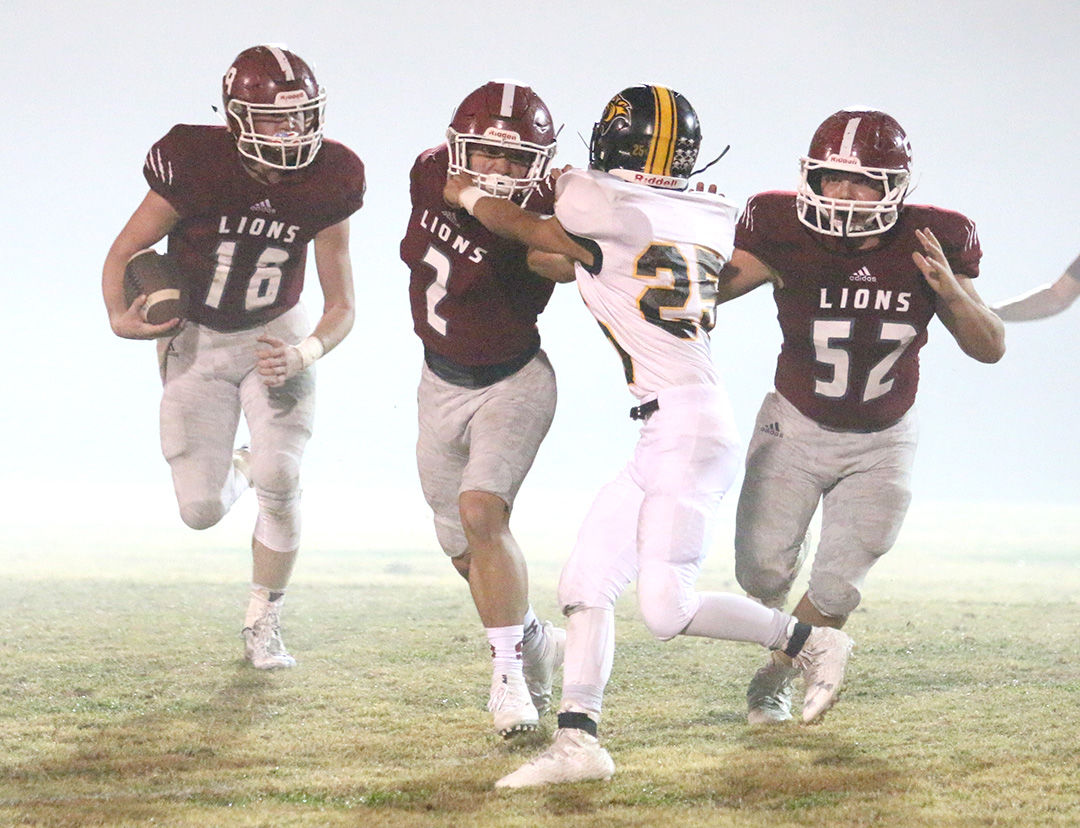 Lane Carter runs behind blocks from Tanner Baker (2) and Dallas Smith (52) on Woodville defensive back Adam Ramirez during Section's 47-21 win on a foggy Friday night on Nov. 3, 2017.

Tanner Baker (2) crosses the goal line as Caden Hicks celebrates during Section's 25-12 win over New Hope on Aug. 31, 2018, the night the program celebrated its 50th anniversary of the start of SHS football.

Lane Carter runs behind blocks from Tanner Baker (2) and Dallas Smith (52) on Woodville defensive back Adam Ramirez during Section's 47-21 win on a foggy Friday night on Nov. 3, 2017.

The series began June 13 with Woodville. Today it continues with a look at 2010-19 decade for Section:

The visiting Lions went on the road and upset a favored North Sand Mountain team that would eventually go 9-3, finish second in Class 2A Region 7 and advance to the second round of the Class 2A playoffs before losing to eventual state champion Tanner. Section fell behind 14-0 in the first quarter before scoring 28 unanswered points thanks to three Chris Manning touchdown runs (31, 5, 3 yards), a 5-yard touchdown run by Trent Linderman and four Alex Hernandez PATs. The Lions led 21-14 at halftime and 28-22 after three quarters. Clinging to a six-point lead late in the fourth quarter, the Lions forced NSM, which had driven to the Section 24-yard line, to turn the ball over on downs with 1:42 remaining to seal the win. Manning ran for 142 yards on 25 carries while Cody Martin added 83 yards on eight carries. The loss snapped Section’s four-game losing streak in the rivalry series.

The Lions celebrated the 50th anniversary of the start of football at Section High School with a comeback victory. After members of Section’s inaugural 1968 football team were honored, the 2018 Lions rallied in the second half to make the celebration a victorious one. Section trailed New Hope 12-6 at halftime before outscoring the Indians 19-0 in the second half. Tanner Baker had a big game offensively, rushing for 156 yards and two touchdowns on 12 carries while catching two passes for 32 yards and one scores. Caden Hicks caught a 9-yard touchdown pass from Ryan Gray, who was 5-of-13 passing for 79 yards and two touchdowns. Defensively, Anthony Scott had three tackles and an interception while Ethan Clark, Taylor Payne, Dylan Rider and Ramon Chapparo had five tackles each.

Section put itself in playoff contention with a thrilling overtime win over an Ider team that entered the game with a 4-1 record and whose only loss was to eventual region champion and state semifinalist Fyffe. Section took an early 7-0 lead on Cody Martin’s 2-yard touchdown run in the second quarter, but the Lions trailed 13-7 in the fourth quarter before Martin’s 1-yard touchdown run and Alex Hernandez’s PAT put Section in front 14-13. After Ider went in front 21-14, Section tied the game with 2:50 remaining on Trent Linderman’s 17-yard touchdown pass to Chris Manning and Hernandez’s PAT. Section then took a 28-21 lead in overtime on Martin’s 2-yard touchdown run and another Hernandez extra point. After throwing a touchdown pass to pull to pull within 28-27, Ider decided to go for the win. But Tyler Duffey and Linderman stuffed a quarterback run play on Ider’s two-point conversion try to give Section the victory. Duffey finished with six tackles, Colby Shankles had 10, Blake Venable eight, Brady Carson and Avery Sartin seven each, Hunter Thomas six and Noah Crawford five while Crawford and Dylan Carson both had interceptions. Offensively, Manning finished with 269 total yards while Linderman was 17-of-29 passing for 187 yards and Martin ran for 50 yards and three scores on 11 carries.

Section used a strong defensive effort to post its first shutout win over Pisgah for the first time since 1986. The Lions forced four turnovers to give head coach Joey Kirby a win over his alma mater. After Chris Manning’s 8-yard touchdown run gave Section a 6-0 lead, Pisgah reached the Section 1-yard line before fumbling into the end zone as Section’s Colby Shankles recovered, the first of two turnovers in the end zone — Manning intercepted a Pisgah pass in the end zone to end the first half. Section went in front 14-0 on Linderman’s 41-yard touchdown pass to Avery Sartin and Manning’s two-point conversion pass to Dylan Carson. Section capped the scoring on Manning’s 12-yard touchdown run with 4:33 left in the game.

The Lions spoiled Class 1A No. 4-ranked Valley Head’s bid for a perfect regular season, handing the previously undefeated Tigers an emphatic loss. Chris Manning was the catalyst for the Lions, rushing for 258 yards and six touchdowns on just 12 carries while also catching five passes for 123 yards. The final carry of his Section career was a 55-yard touchdown run. Dylan Carson and Dusty Martin also had touchdown runs for Section. Meanwhile, the Lions shut down and nearly shut out a Valley Head offense that came in as Class 1A’s fifth-best scoring offense at 39 points per game. The Tigers avoided the shutout with a late fourth-quarter touchdown. Brady Carson and Cody Martin finished with 12 and 11 tackles respectively for the Section defense, while Avery Sartin had nine, Colby Shankles eight and Dylan Carson and Manning seven each.

The Lions snapped a four-game losing streak to their county rival with a dominant defensive effort and power running game that produced 273 yards. Meanwhile, Section’s defense held Pisgah to only 14 rushing yards. Section grabbed a 6-0 lead in the second quarter on Tanner Baker’s 2-yard touchdown run. The Lions went in front 12-0 on Baker’s 4-yard touchdown run early in the fourth quarter. After a Pisgah score, Gray threw a 6-yard touchdown pass to Ethan Clark with 2:16 remaining to seal the win for Section. Baker ran for 162 yards while Gray was 5-of-8 passing for 68 yards.

Section was able to grind out a tough win over a Cedar Bluff team that went on to advance to the Class 1A state quarterfinals. The Lions enjoyed a 6-0 halftime lead following Colby Shankles’ 3-yard touchdown run in the second quarter. Section went in front 14-0 in the third quarter on Brady Carson’s 40-yard touchdown run and his two-point conversion run. Leading 14-7 in the fourth quarter, Section’s defense stopped Cedar Bluff on a fourth-and-short at the Section 30-yard line to halt the Tigers’ drive. The Lions forced another turnover on downs after Cedar Bluff got the football back at the Section 46-yard line. The win ended Section’s seven-game losing streak to Cedar Bluff.

The Lions gave Chris Hammon his first win as Section head coach with a shutout victory over host Ider. The Lions, who had an early 60-yard touchdown run by Drake McCutchen negated by penalty, took a 3-0 lead on Leo Viljanen’s 42-yard field goal in the first quarter before enjoying a 10-0 lead at halftime following McCutchen’s 8-yard touchdown run and Viljanen’s PAT in the second quarter. The only points of the second half came when Ider snapped the ball over its punter’s head and he was ultimately tackled in the end zone for a safety in the third quarter. The win snapped Section’s three-game losing skid to the Hornets.

The Lions rallied from a 14-6 third-quarter deficit to post the win over visiting Class 2A Region 8 foe Sand Rock. The win ended Section’s nine-game losing streak to the Wildcats. After a Sand Rock touchdown in the third quarter, Anthony Scott returned a short kickoff 69 yards for a touchdown to swing the momentum to Section’s side. After the Lions’ defense forced a three-and-out, Section grabbed the lead when Ryan Gray threw a 10-yard touchdown pass to Caden Hicks with 4:28 left in the third quarter before extending its lead on Gray’s 3-yard touchdown run with 7:01 remaining. Gray was 10-of-15 passing for 121 yards and one score.