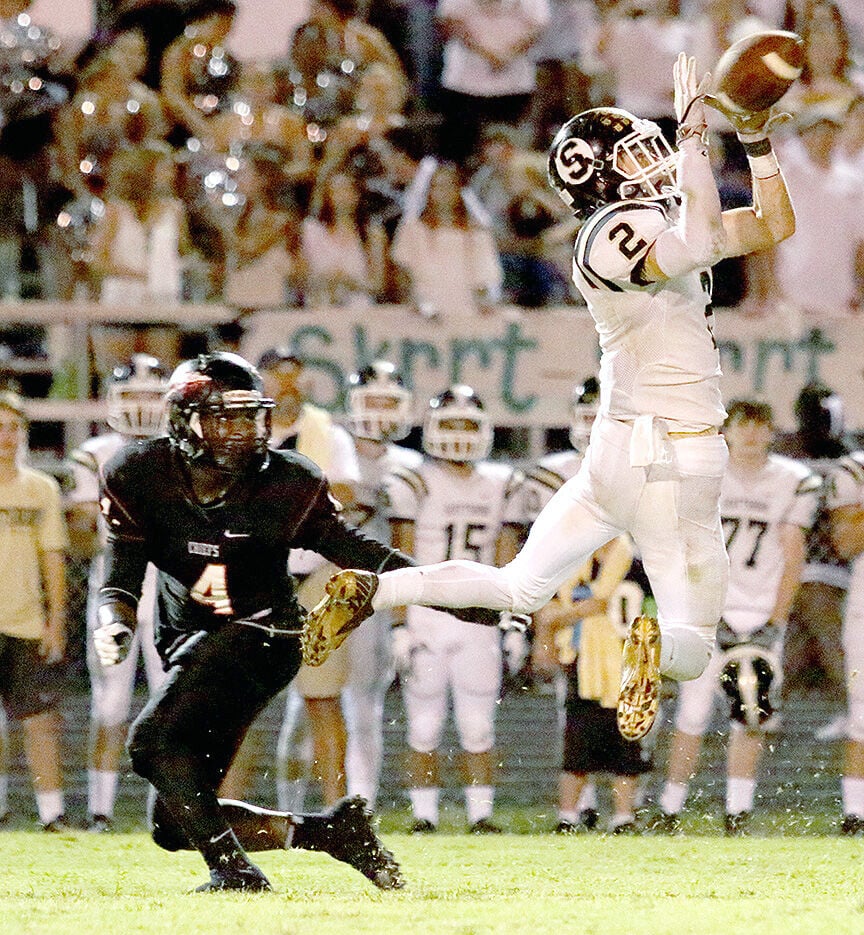 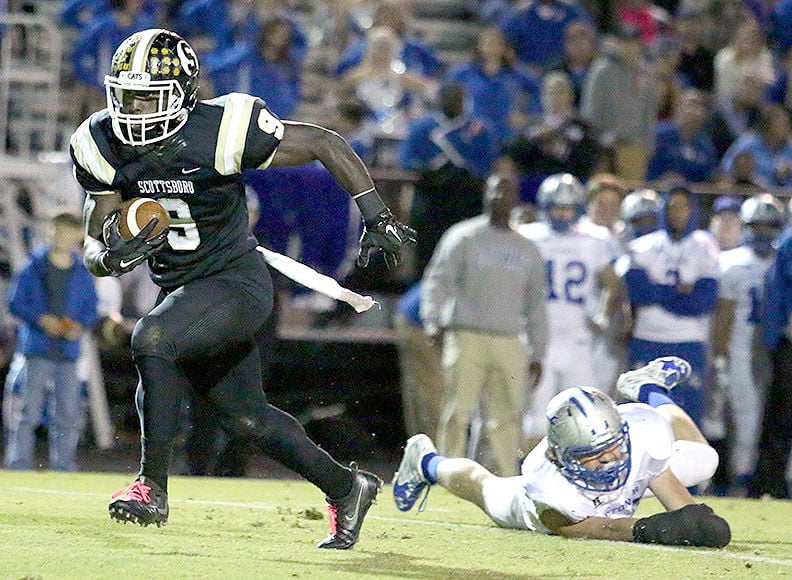 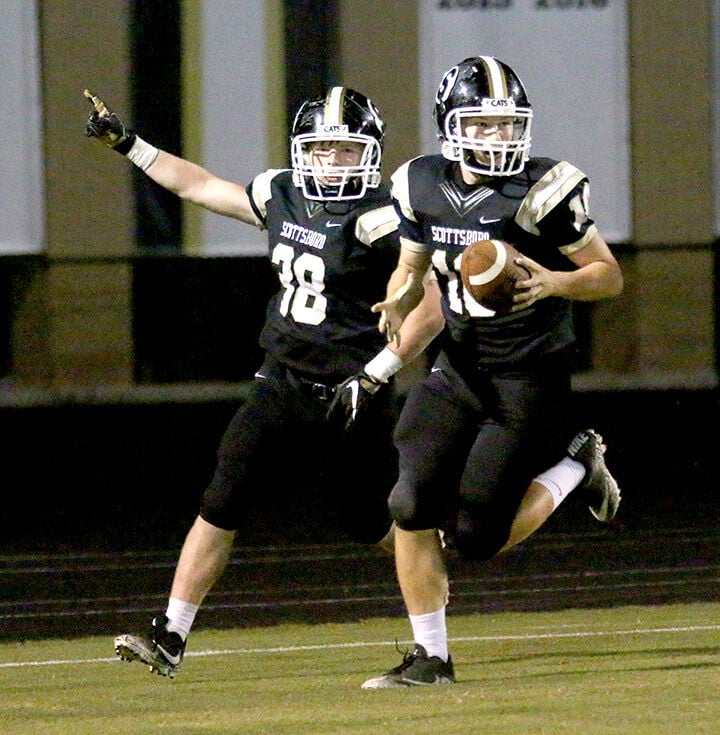 Scottsboro's Noah Linville (right) and Cameron Whited celebrate Linville's 24-yard interception return for a touchdown during a 56-27 win over North Jackson on Sept. 29, 2017. 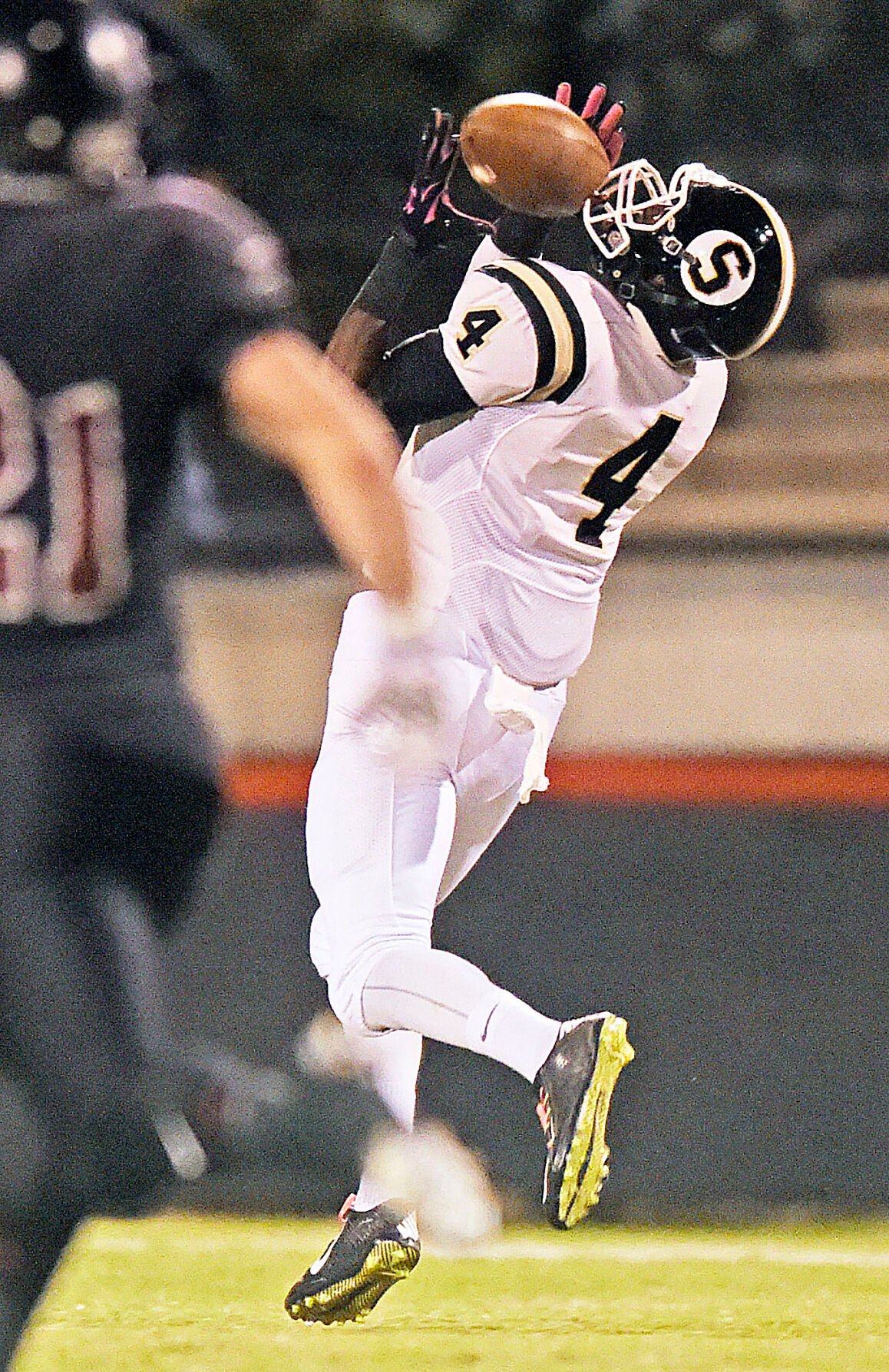 Scottsboro's Noah Linville (right) and Cameron Whited celebrate Linville's 24-yard interception return for a touchdown during a 56-27 win over North Jackson on Sept. 29, 2017.

As the 2020 high school football season ushers in a new decade on the gridiron, the Jackson County Sentinel concludes a six-part series ranking the Top 10 games of the 2010-19 decade for each program in Jackson County.

The series began June 13 with Woodville, followed by Section on June 20, Pisgah on June 27, North Sand Mountain on July 4 and North Jackson on July 11. Today it concludes with a look at 2010-19 decade for Scottsboro:

This win did not give Scottsboro a region championship or a playoff berth. But it is one of the biggest wins in school history. Since the Battle of the Valley rivalry began in 1988, Scottsboro had never won at North Jackson (the Wildcats did later receive a forfeit win from a 23-20 loss at North Jackson in 1996). That finally ended on a night in which the Class 5A No. 7-ranked Wildcats rallied from an early deficit and shut down the 4A No. 10 Chiefs to record Scottsboro’s long-awaited first on-field win on North Jackson’s home turf. After falling behind 6-0 in the first quarter, Scottsboro built a 17-6 lead on DeKarlos “DK” Billingsley’s 25-yard touchdown run, Bailey McGaha-Potter’s 27-yard field goal and Billingsley’s 13-yard touchdown run that came after Evans Wright recovered a North Jackson fumble caused by Scottsboro pass rusher Ethan Edmondson. Scottsboro put the game away in the fourth quarter on Bo Nix’s 3-yard touchdown that followed a 65-yard interception return by teammate Austin Freeman. “It’s an honor for this group to come and do this. We made history…never have to hear it again that we hadn’t won here,” said then Scottsboro head coach Patrick Nix.

The attention of the entire state of Alabama was focused on Scottsboro’s Trammell Stadium when the No. 2-ranked Wildcats hosted top-ranked Etowah as two 8-0 teams battled for the Class 5A Region 7 championship. The teams traded scores until Scottsboro posted three unanswered touchdowns on Austin Freeman’s 20-yard touchdown run, DeKarlos “DK” Billingsley’s 29-yard touchdown run and Bo Nix’s 58-yard touchdown pass to Ethan Edmondson to grab a 35-20 halftime. The Wildcats’ momentum continued in the second half thanks to Billingsley’s touchdown runs of 1 and 25 yards and Nix’s 5-yard touchdown pass to Cole Childress as Scottsboro claimed its first region title in 12 years and was set to ascend to the program’s first No. 1 ranking since 1967. Billingsley ran for 222 yards and four touchdowns on 26 carries. Nix was 15-of-21 passing for 238 yards and two scores.

The game featured arguably the biggest momentum swing in Scottsboro football history. Trailing 21-14 at halftime, Scottsboro scored three times in the first 1:21 of the third quarter to grab a 35-21 lead on Jacob Manning’s 80-yard kickoff return for a touchdown, Manning’s trick-play 38-yard touchdown pass to Tanner Shelton one play after a North Jackson fumble and Peyton Grant’s 35-yard interception return for a touchdown. Scottsboro got a two more interception returns for touchdowns in the fourth quarter as the Wildcats won their third straight against the Chiefs.

The Wildcats went on the road and defeated Madison Academy to essentially clinch a Class 5A first-round home playoff game. After falling behind 6-0, Scottsboro grabbed a 7-6 lead on Cam Bass’ 3-yard touchdown run and the first of all-state kicker Mees de Jongh’s three PATs. Down 12-7 at halftime, Scottsboro went in front for good on Bass’ 3-yard touchdown run in the third quarter before pushing its lead to two possessions on Jacob Manning’s 6-yard touchdown run with 9:44 remaining. Manning ran for 234 yards on 39 carries while Noah Linville and A.J. Widgeon had interceptions for the Scottsboro defense.

Top-ranked Scottsboro earned its first Class 5A state quarterfinal appearance in 19 years while also setting a single-season school record for wins with 12. Scottsboro raced out to a 28-6 first-half lead, and after Fairfield pulled within 28-20 at halftime, Scottsboro put the game away in the second half on touchdown runs of 1 and 80 yards by DeKarlos “DK” Billingsley and 13 yards from Bo Nix, who had also had a 31-yard touchdown pass to Sam Manning in the first half. Billingsley finished with 203 rushing yards and four touchdowns on 19 carries while Nix ran for 135 yards and two scores.

Needing a win to keep its playoff hopes alive, Scottsboro went on the road and surprised a Southside team that needed a win to set up a region championship matchup with Fort Payne. Scottsboro jumped out to a 28-7 lead in the first half and had to hold off Southside’s rally attempt. Southside pulled within 35-33 after three quarters, but Scottsboro answered with a 3-yard touchdown pass from Bo Nix to Avery Sartin. Nix was 14-for-28 in passing for 338 yards and four touchdowns while Malik Talley caught 10 passes for 252 yards and three scores. Southside pulled within 41-39 with 4:07 remaining, but the Scottsboro defense stuffed the Panthers’ tying two-point conversion attempt.

Scottsboro snapped a four-game losing streak to Fort Payne and recaptured the TopCat Trophy while also clinching the right to host a first-round playoff game. Scottsboro built a 21-7 halftime lead on two short touchdown runs by Trey Lewis and a Lewis’ 26-yard touchdown pass to Cole Bartlett on a third-and-goal play. After Bartlett blocked a Fort Payne punt in the third quarter, Lewis scored on a 4-yard touchdown run punt to push the Wildcats’ lead to 28-7. After Brett Clark recovered Fort Payne muffed punt, Lewis threw a 35-yard touchdown pass to Thomas Blizzard with 7:12 remaining to give the Wildcats a 35-13 advantage.

The Wildcats turned in a flawless defensive effort, holding visiting Brewer to no points, no total yards and no first downs during the region win. Brewer’s longest play from scrimmage was a 10-yard pass in the fourth quarter. The Patriots then lost yardage on the ensuing fourth-and-2 play, their last chance at picking up a first down. Brewer had zero total yards on 28 offensive plays and was forced into minus 34 rushing yards by the Scottsboro defense. It was the first time in 12 years that Scottsboro held a team to minus rushing yards and the first time Scottsboro held an opponent to no first downs since 1933. Offensively, Jacob Manning ran for 98 yards and four touchdowns while Cam Bass ran for 121 yards and one score.