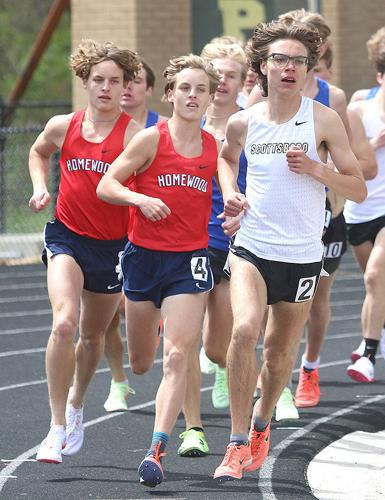 Evan Hill (right) and the Scottsboro varsity boys track and field team will try to win a Class 5A state championship next season after winning the Class 6A state title this past spring. The Wildcats will compete the next two seasons in Class 5A Section 4. 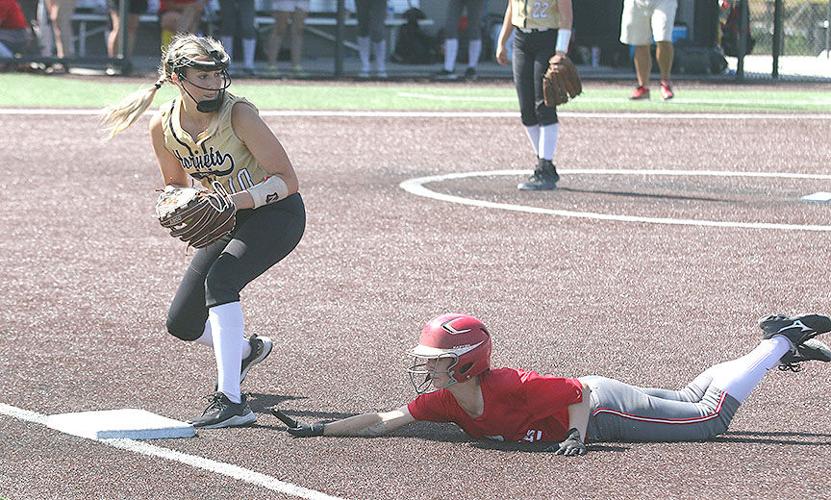 Pisgah's Kaylee McAllister slides back to first base against Ider during the Class 2A East Softball Regional. Pisgah and Ider will continue to be Class 2A Area 15 foes the next two seasons along with NSM and Section. 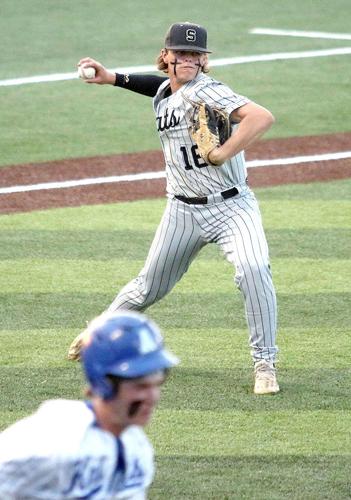 Colton Atkinson and Scottsboro will play in Class 5A after spending the past two seasons in 6A. The Wildcats will still play Arab in area play, which also dropped down, along with Guntersville and Douglas in the new Class 5A Area 15.

After previously voting earlier this spring to move baseball, soccer and softball to region play, the AHSAA Central Board of Control tabled that vote on Monday citing it needed “more time to study its options.” Thus, those three sports will continue with area play for the next two seasons.

Baseball, soccer and softball areas along with golf, tennis and track and field sectional sectionals were released by the AHSAA on Tuesday.

Scottsboro is the only team changing classifications during the next two-year classification period, going from Class 6A back to 5A. But there were a number of changes for local teams’ areas and sectionals during this upcoming two-year reclassification cycle:

Baseball — All local teams baseball areas’ changed in some degree, whether it be in the form of new opponents or number of teams in an area.

Scottsboro moves from Class 6A Area 15 to 5A Area 15 and will face Arab, Guntersville and Douglas in area play. Arab is also dropping down from 6A. Scottsboro, Arab and Guntersville were playoff teams last season.

Meanwhile, North Jackson and DAR are joined in a new-look 4A Area 14 by Cherokee County and 2022 4A state runner-up Etowah. Three of the four teams made the playoffs in 2021. Former North Jackson area foes Madison County and New Hope shifted over to Area 15.

Jackson County heavy Class 2A Area 15 will expand to become a five-team area the next two years as North Sand Mountain, Pisgah, Section and Ider all return and will be joined by Fyffe, which moves down from 3A. Section is the defending area champion while Ider was the runner-up.

Golf — Scottsboro makes the move down from Class 6A and will face a new line-up of sectional opponents.

Meanwhile, Class 1A-2A Boys Section 3 has a new-look for the next two seasons. NSM, which has won three straight sectional titles and played in the state tournament in each of those seasons, will continue to compete in 1A-2A Section 3 along with county rivals Pisgah, Section, Skyline and Woodville along with Cedar Bluff, Ider, Valley Head and Whitesburg Christian. Newcomers to the sectional are Jacksonville Christian, Donoho, West End and Pleasant Valley, which moves down from Class 3A.

Soccer — Scottsboro drops from Class 6A to 5A for the next two seasons.

Last season, Class 4A and 5A formed one division but they’ve been separated for next season.

Unlike other sports with area play, soccer features only eight areas instead of 16. That means Scottsboro’s varsity boys and girls teams will play in a six-team area, Class 5A Area 7, against Arab, Boaz, Crossville, Guntersville and Fairview.

Crossville made the Class 4A-5A boys state semifinals this past season while Guntersville also made the playoffs. On the girls side, Guntersville advanced to the state quarterfinals last season.

Skyline, who has played in the Class 1A State Finals the past two seasons, and Woodville remain in Class 1A Area 15 but now are joined there by Valley Head and Gaylesville instead of Athens Bible, Decatur Heritage and Lindsay Lane. Skyline is the defending 1A Area 15 champion.

Also, Scottsboro drops from Class 6A and will compete in a three-team 5A Area 14 against Guntersville and Crossville. Scottsboro also played in and won a three-team area in Class 6A each of the past two seasons.

North Jackson, which finished third at the Class 4A state tournament last week, will continue to face off with DAR, New Hope and Madison County, which also advanced to the state tournament, in 4A Area 14. North Jackson won its fourth straight area championship last season.

Class 2A Area 15 also saw no changes as NSM, Pisgah, Section and Ider will be area foes for another two seasons. Pisgah is the defending area champion and Ider, the area runner-up, advanced to the state tournament.

Which areas are bracketed for which regionals have not been released.

Tennis — Scottsboro makes the move from the Class 6A division to the 4A-5A division the next two seasons.

The Scottsboro varsity girls teams made the state tournament for the first time in program history last season while its boys and girls team both had their most sectional success. Now those teams will play in Class 4A-5A Section 7 against Arab, Guntersville, DAR, Madison County, New Hope, Randolph, St. John Paul II and Westminster Christian.

Track and Field — The sport with the least amount of re-alignments may have been track and field, where many teams will compete with the same sectional opponents as the past two years.