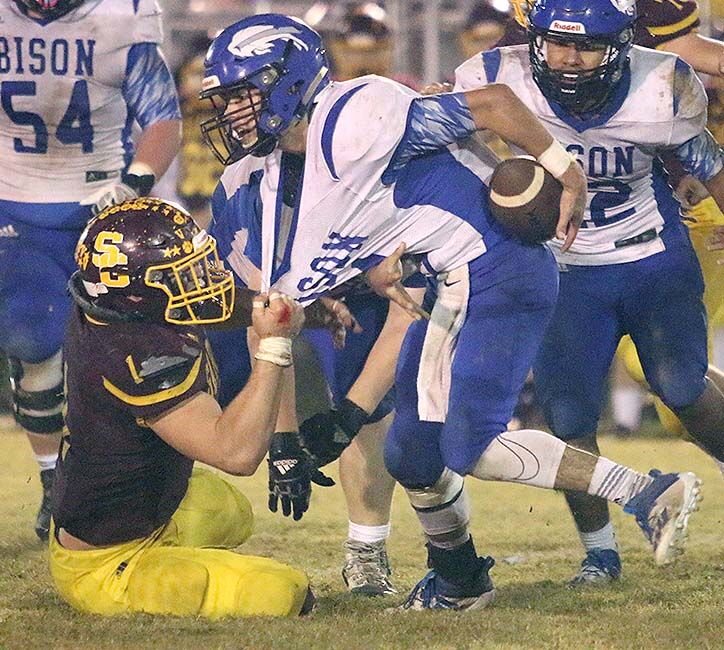 NSM quarterback Luke Bell is dragged down by the jersey by Spring Garden's Luke Welsh for a sack during NSM's 21-0 loss in the Class 2A state quarterfinals Friday night at Spring Garden High School. 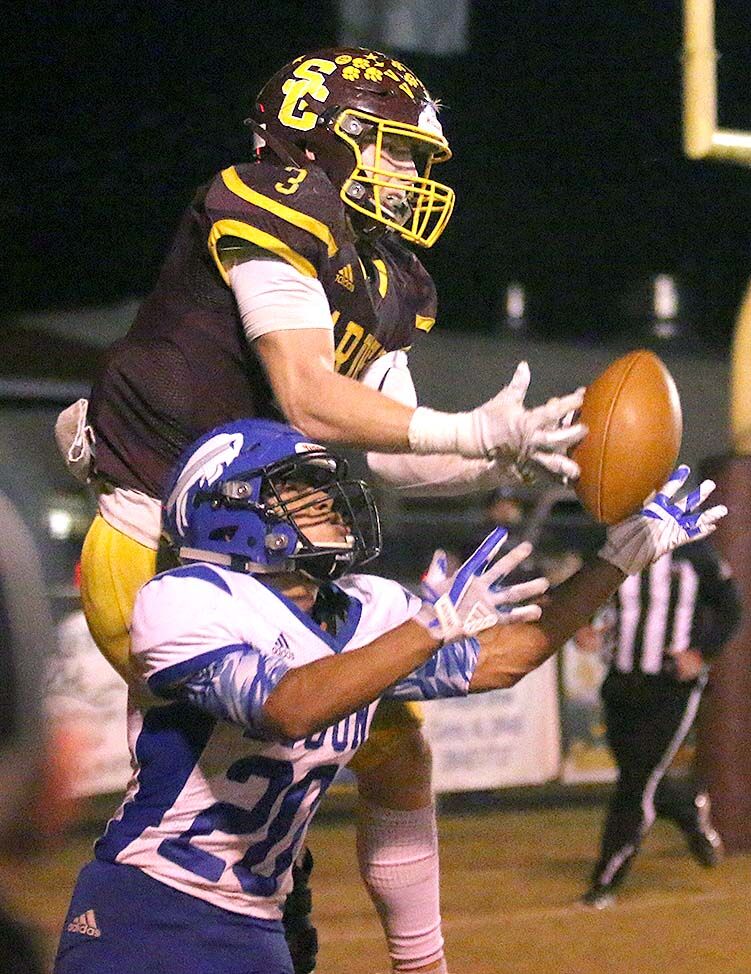 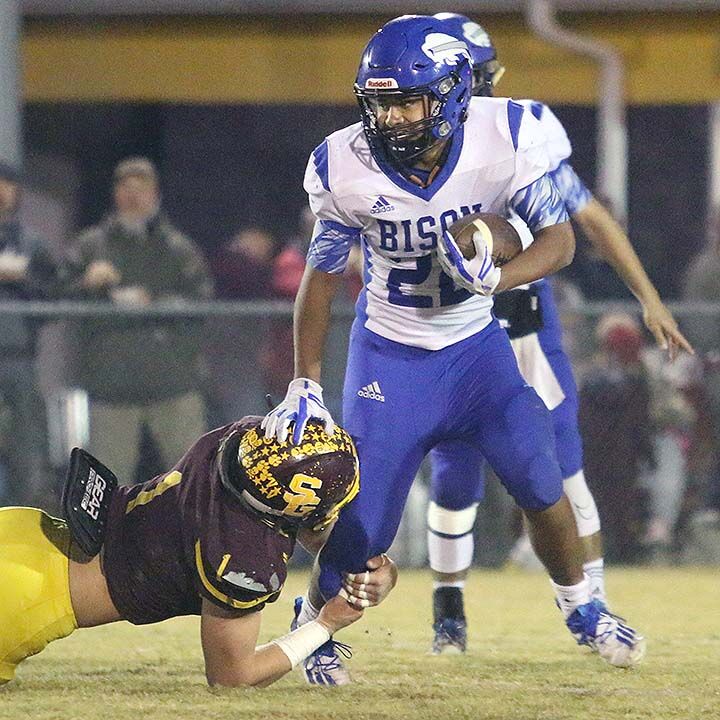 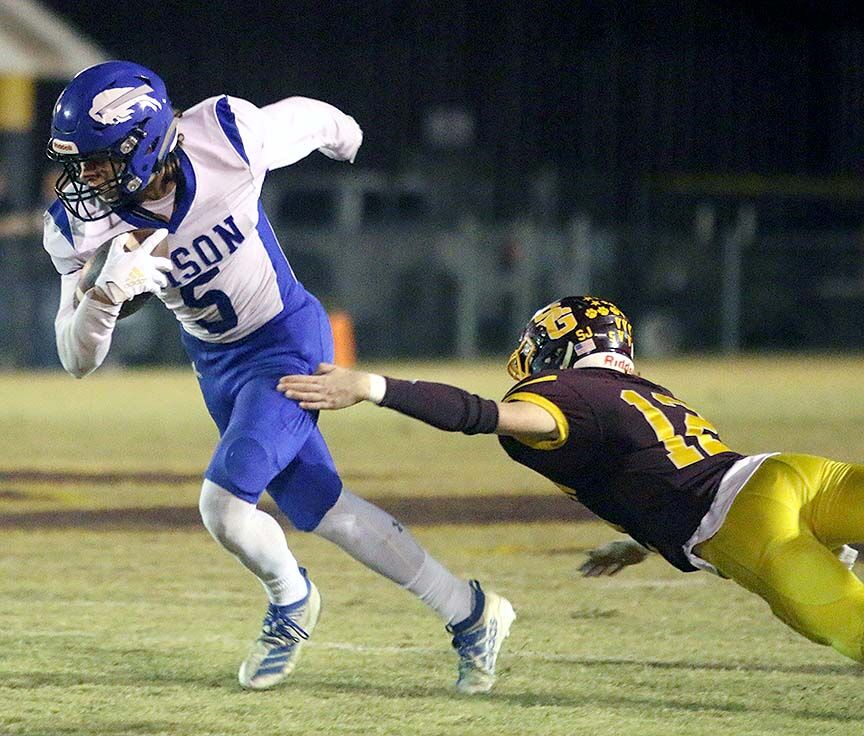 Derek Bearden eludes a Spring Garden defender and cuts up field after catching a screen pass during NSM's 21-0 loss to the Panthers in the Class 2A state quarterfinals Friday night.

NSM quarterback Luke Bell is dragged down by the jersey by Spring Garden's Luke Welsh for a sack during NSM's 21-0 loss in the Class 2A state quarterfinals Friday night at Spring Garden High School.

Derek Bearden eludes a Spring Garden defender and cuts up field after catching a screen pass during NSM's 21-0 loss to the Panthers in the Class 2A state quarterfinals Friday night.

The winningest season in North Sand Mountain football history was ended by a team that is also enjoying a historical season.

No. 4-ranked Spring Garden held No. 6 NSM to only 84 total yards and five first downs while rushing for more than 300 yards to secure a 21-0 win over the Bison in the AHSAA Class 2A State Quarterfinals Friday night at Spring Garden High School.

The loss ended NSM’s record-setting season at 11-2, the most wins in school history. The Bison, who were making their second consecutive and second all-time state quarterfinal appearance, also won their first region championship this season.

“Man what a year,” said NSM head coach Keith Kirby, who became the winningest head coach in his alma mater’s history earlier this season. “Great year. Our program’s been to the third round of the playoffs two years in a row. We’ll go to work and hopefully get over the hump next year. This time of year you just want to keep playing. Hate it’s over with.”

The victory gave Spring Garden (12-1) its first state semifinal appearance. The Panthers will travel to Florence next week to play top-ranked Mars Hill Bible, a 55-14 winner over Aliceville in Friday’s other North Bracket Quarterfinal contest.

Spring Garden eliminated NSM with a power running game and a suffocating defense. While the Panthers ran for 317 yards on 54 carries, they held NSM to negative rushing yards (22 carries for minus-2 yards), a number skewed by the numerous sacks of NSM quarterback Lake Bell, who was pressured all game long while managing to complete 9-of-18 passes for 89 yards.

“Couldn’t handle them,” Kirby said of the Spring Garden defense. “They loaded the box up, played man (on the receivers). We struggled to block them. (Bell) didn’t have time (to pass). All that equaled not a lot of success on offense. We just couldn’t get any offense going. (Spring Garden) did an excellent job.”

NSM’s defense did keep the Bison in it, turning back several Spring Garden scoring chances in the first three quarters, including one after NSM fumbled at its own 19-yard line. That Spring Garden possession ended with NSM defensive back Jorge Luna breaking up a fourth-down pass in the end zone.

“Our defense played good, kept us in it there for a long time,” Kirby said.

NSM countered with its best drive of the night, as Bell completed passes of 10, 9 and 12 yards to Derek Bearden, Jacob Kirby and Mason Smith respectively before his third-and-long pass for Bearden was intercepted by a leaping Cooper Austin at Spring Garden 3-yard line.

The Panthers put the game away on Luke Welsh’s 7-yard touchdown run, capping a 12-play, 62-yard drive, with 5:59 remaining in the game.

Welsh ran for 114 yards on 22 carries for Spring Garden while Weston Kirk had 72 yards on 10 carries and Kirk had 71 yards on 17 carries to go with 43 yards passing while completing 5 of 13 attempts.

Fernando Luna finished with 27 rushing yards on eight carries and two catches for 5 yards for NSM while Bearden had three catches for 33 yards, Mason Smith two for 41 and Jacob Kirby two for 10.

Keith Kirby was appreciative to his team for providing him, the school and the community with a memorable 2020 season.

“(This team) means a lot to me. They came to work every day, bought into what we were doing and worked their tails off. I just hate we couldn’t keep it going,” he said. “The seniors have been around the program for a long time. They gave everything they’ve got. Every day they brought it. Multiple school records set. Heck of a year for them. Good group. We’re going to miss them.”