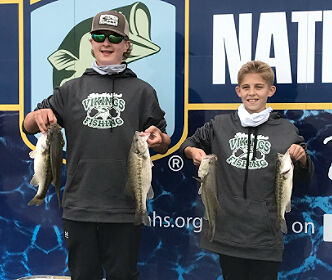 The Skyline fishing program enjoyed a solid debut on Saturday.

In the Junior Division, Skyline’s Eli Sanders and Kristian King finished fourth out of 68 angler duos/boats with a five-fish catch weighing 8.92 pounds. Jacob Baugh and Scott York teamed up to finish 18th with two fishing weighing 2.88 pounds while Jocelyn Boles and Haisa Haislip were 27th with one fish weighing 1.49 pounds.

In the Senior Division, Landon Guest and Jordan Guest finished 63rd out of 188 angler duos/boats with three fish weighing 4.97 pounds. Hank Utter and Sam Utter were 116th with two fishing weighing 1.94 pounds and Bryant Kennamer was 118th with one fishing weighing 1.90 pounds.

“I am so proud of these anglers for a strong finish in our inaugural tournament,” said Skyline fishing coach Drew McNutt. “Most of these kids didn't start fishing until our practice tournament a week ago. The anglers and parents are super excited about the opportunities that they will have as we move forward into the season and continue to grow the program. High school bass fishing is about growing the sport of bass fishing and getting kids and parents outdoors.”

McNutt also expressed his gratitude to the program’s sponsors and boat captains.

“We want to thank our sponsors for making this dream become a reality,” McNutt said. “Also, we would like to thank our boat captains. They sacrifice a lot for these anglers, but they are just as excited to teach and watch these anglers grow and learn.”