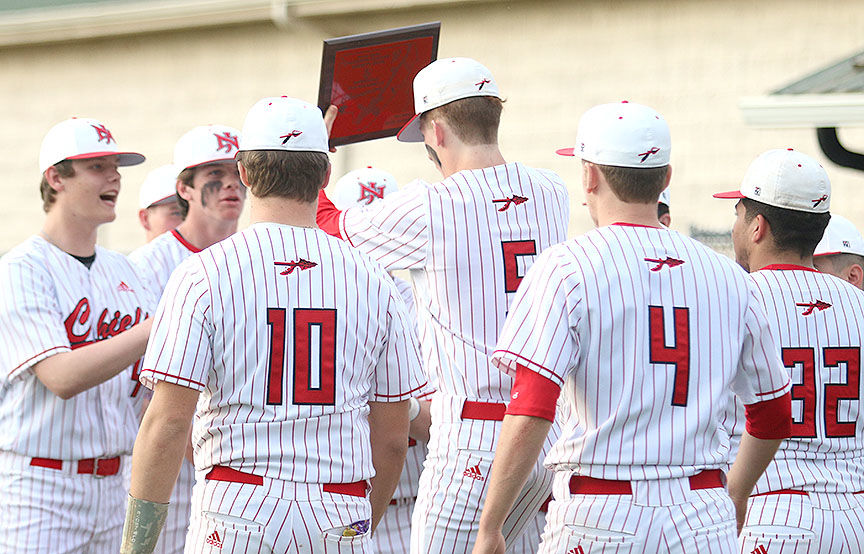 The North Jackson baseball team celebrates after getting the trophy following its 6-2  Jackson County championship game win over NSM. 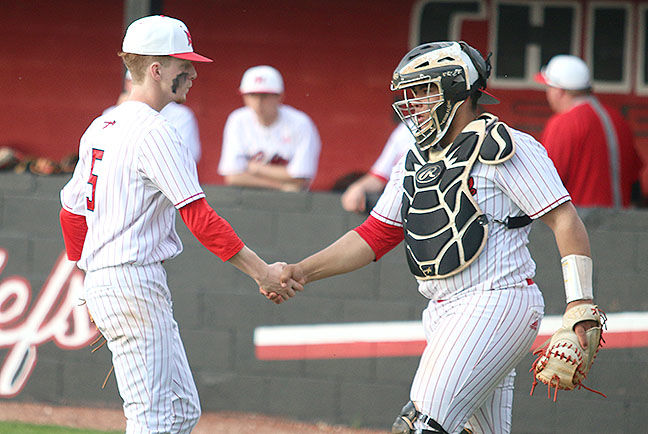 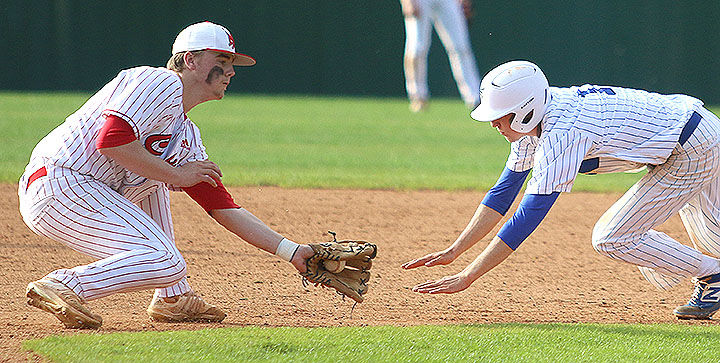 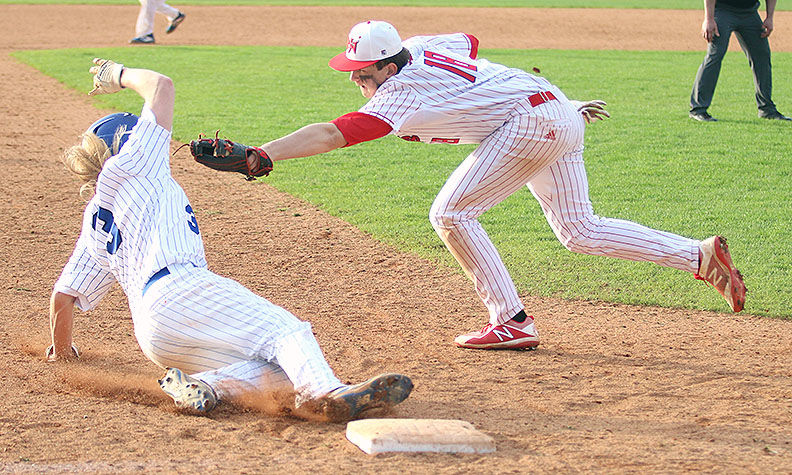 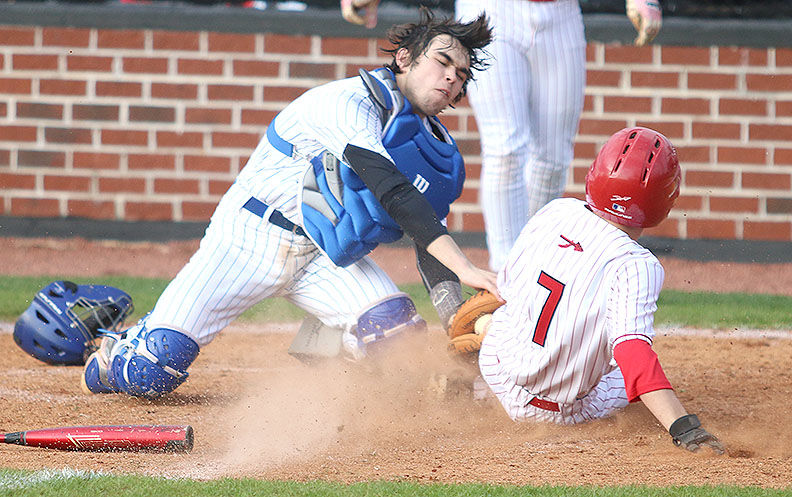 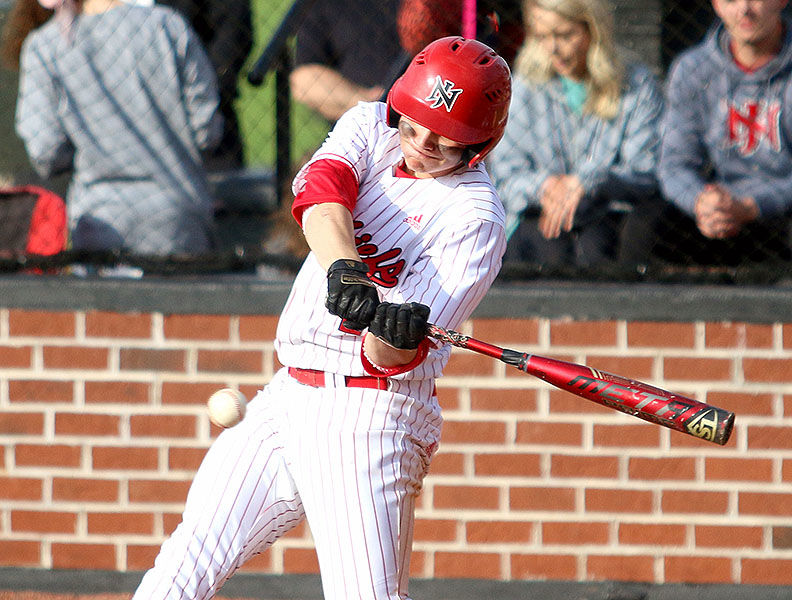 The North Jackson baseball team celebrates after getting the trophy following its 6-2  Jackson County championship game win over NSM.

North Jackson’s reign as Jackson County Baseball champion will continue for another year.

It’s the third consecutive county championship and fifth in the past six seasons for North Jackson, which has won nine county titles since 2006.

“We come out here every day working for championships, state, county and area,” Porter said. “We take pride in it. Three years straight — two years for me (as coach) — and hopefully more years to come.”

Gass turned in what Porter called his “best” performance of the season. The right-hander recorded 16 strikeouts, one shy of tying the school record, while limiting NSM to two runs (one earned) on two hits and one walk.

“It’s fun calling pitches when you can call three pitches and he spots them all up,” Porter said. “You had a guy that’s on, and he’s spotting fastball, curveball, change-up, inside, outside, high. It was fun to see.”

Gass threw 75 of his 93 pitches for strikes.

“My fastball, the two-seamer, was really working,” Gass said, “and I had great command of my curveball.”

After Gass struck out the side in the top of the first inning, North Jackson (6-8) took advantage of some NSM miscues to score three unearned runs in the bottom of the first. The Bison committed a throwing error on a possible double play, then dropped a pop-up in the infield before allowing another run on a passed ball before Landon Barnes’ RBI groundout.

It stayed 3-0 until the top of the fifth when NSM’s Harley Tucker reached on a dropped third strike, and pinch runner Jake Case scored after the ball went into left field on his attempt to steal.

But North Jackson countered with three more runs in the bottom of the fifth. Macklin Guess and Matt Adams singled to start the inning, and Brandon Poole and Jody Moore were hit by a pitch, the latter of which drove home Guess to make it 4-1 Chiefs. Adams then scored on Barnes’ infield single for a 5-1 lead.

The Chiefs were in position to break the game open with the bases loaded with no outs, but NSM turned a 4-6-3-2 triple play to end the inning. North Jackson did score run during the play but another runner trying to score was cut down at home for the final out.

NSM (3-4) tried to rally in the seventh, as Landon Green led off the inning with a single and Jayden Culpepper drew a walk. Green ultimately scored on Dylan Marr’s RBI groundout, but Gass struck out the next NSM batter to end the game.

Guess finished 2-for-4 with two runs scored for the Chiefs while Adams, Barnes, Carson Smith, Ray Ray Sanders and Dalton Morris had one hit each.

“It’s hard to spot (North Jackson) three runs, and we did that, because we made errors on routine plays. They’ve got a good team, can’t give a team like that runs,” said NSM coach Ivan Richard. “But we’re pretty good, too. The thing about us is they’re wanting to.”

Gass said the Chiefs were determined not to let the program’s championship streak “end on our watch.”

“We’ve been working hard,” he said. “Everything paid off.”

North Jackson 24, Pisgah 0 — The top-seeded Chiefs scored 13 runs in the second inning Friday night on the way to advancing to the championship game.

Tyler Henninger recorded eight strikeouts over four innings to get the win on the mound. Adams struck out the side while pitching the final inning.

NSM 11, Section 1 — Second-seeded North Sand Mountain scored seven runs in the bottom of the fourth inning to secure the win over the third-seeded Lions on Saturday.

Landon Green and Harley Tucker both went 2-for-3 with two RBIs for NSM while Jayden Culpepper, Lake Bell and Dylan Marr had two hits and one RBIs each. The Bison also got one hit and one RBI from Damon Gentles, one hit teach from Drake Holland and Ethan Debter and one RBI from Derek Bearden.

Holland and Green combined to pitch a two-hitter for the Bison. Holland recorded eight strikeouts over three innings while Green struck out two over two innings.

Trevier Porter singled and doubled for Section (3-10) while McCutchen had an RBI.

Section 24, Woodville 1 — The Lions scored nine runs in the bottom of the first inning and cruised to the win over sixth-seeded Woodville Friday night.

White recorded six strikeouts over four innings pitched to get the win on the mound for Section. Pope struck out two batters while pitching 2/3 of an inning while Wilson fanned one batter to end the game.

Christian Chambers and Brett Berger both singled for Woodville (0-2) while Zac Thompson drove in a run.

Pisgah 6, Skyline 5 — The fourth-seeded Eagles edged the fifth-seeded Vikings for a spot in the semifinals with a walk-off victory Friday afternoon.

Ridge Medlock scored on a passed ball in the bottom of the seventh to give Pisgah the win.