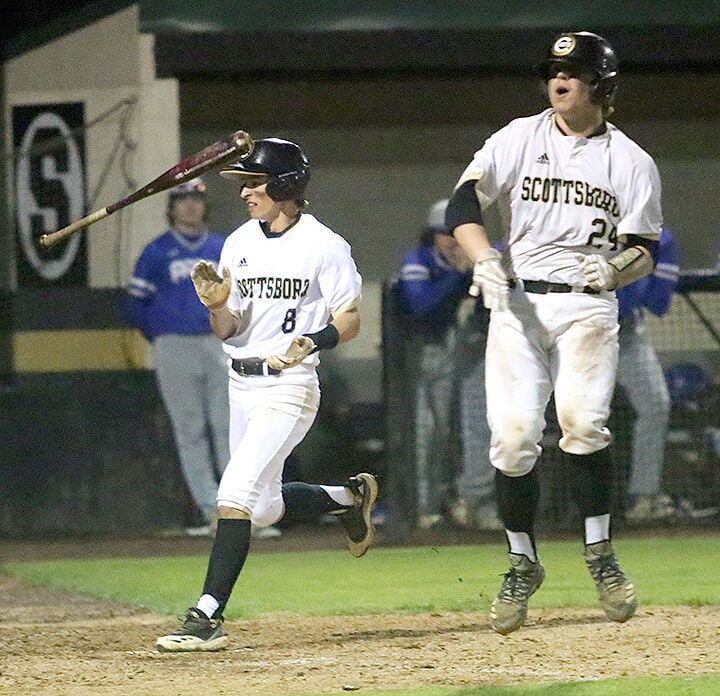 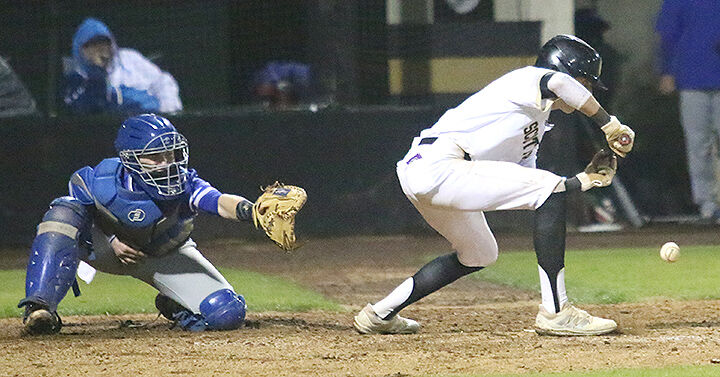 Connor McLaughlin (right) lays down a bunt to drive in teammate Sam Bryant with the tying run in the bottom of the seventh inning during Scottsboro's 4-3 Class 6A Area 15 win over Arab. 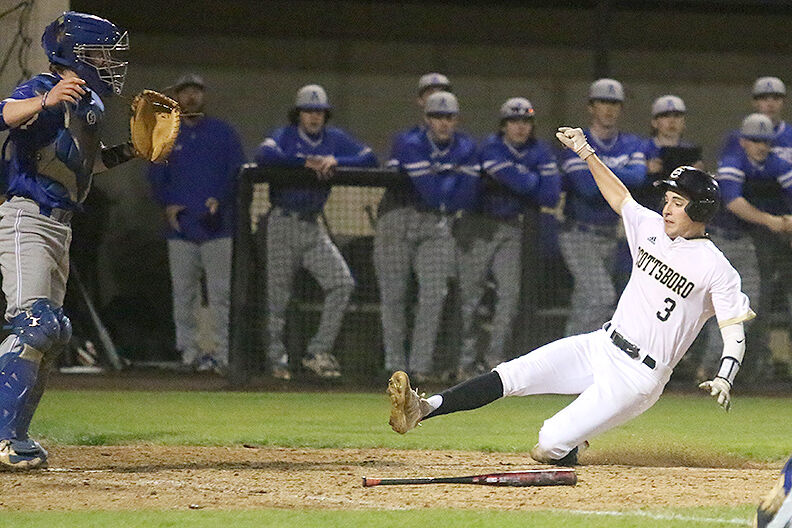 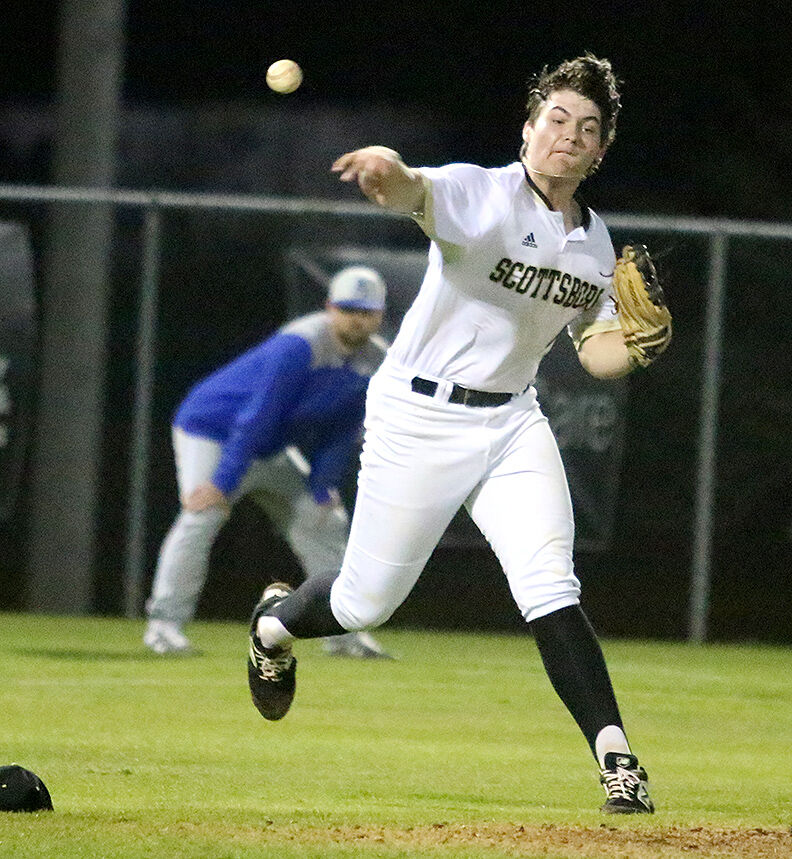 Scottsboro pitcher Camden Matthews throws to first base for an out after fielding a grounder during the Wildcats' 4-3 Class 6A Area 15 win over Arab. Matthews had nine strikeouts over 6 2/3 innings pitched.

Connor McLaughlin (right) lays down a bunt to drive in teammate Sam Bryant with the tying run in the bottom of the seventh inning during Scottsboro's 4-3 Class 6A Area 15 win over Arab.

Scottsboro pitcher Camden Matthews throws to first base for an out after fielding a grounder during the Wildcats' 4-3 Class 6A Area 15 win over Arab. Matthews had nine strikeouts over 6 2/3 innings pitched.

Ethan Wininger isn’t one of the Scottsboro baseball team’s leaders in walks, but the hard-hitting senior catcher drew one at the perfect time Tuesday night.

Wininger drew a bases-loaded, walk-off walk in the bottom of the seventh inning to plate teammate Collin Perkins with the winning run for a 4-3 Scottsboro victory over visiting Arab in Game 1 of the teams’ Class 6A Area 15 series.

Wininger’s RBI walk capped a three-run seventh inning for the Wildcats, who led most of the way before overcoming a 3-1 deficit to win.

“Huge to win that first game (of the series),” Smith said. “Bu the job is not finished. We know we’ve got to reset and get ready to go (Friday) because Arab is a scrappy team and is going to be ready to punch back.”

The series opener was a pitcher’s duel for most of the way.

Camden Matthews turned in another solid outing for Scottsboro (12-9, 1-0), allowing three runs (one earned) on two hits, three walks and two hit batters while striking out nine over 6 2/3 innings. Waylon Farr, who ultimately wound up getting win on the mound, allowed one hit while pitching one-third of an inning in relief.

“Cam was great," Smith said. "He attacked their hitters, filled the (strike) zone up. Can’t really ask for more from your No. 1 (pitcher) to take it the seventh. That one inning didn’t (define) his outing because he put us on his back for six innings.”

The game went to the seventh inning tied 1-all — Scottsboro scored in the first when Perkins walked and scored on Matthews’ RBI single while Arab (10-9, 0-1) tied it in the sixth on Dakota NeSmith’s home run — before the Knights took a 3-1 lead.

Scottsboro’s half of the seventh inning started just as Arab’s did, with a hit batter. After Landon Grider reached to lead off the frame for the Wildcats, Sam Bryant reached on an Arab error. Two batters later, Perkins delivered an RBI double to left-center field to plate Grider, and the Wildcats then tied it 3-all when Bryant scored on a safety-squeeze bunt single by Connor McLaughlin.

“Executing the safety squeeze, to me, once we got that down, I felt pretty good about things,” Smith said. “With our team, we preach that there’s no greater honor in our offense than to sacrifice for a brother. When you get that done, in that big of a moment, you just feel like things are going to go in your favor.”

After a popout for the second out of the inning, Matthews was intentionally walked after working a 2-0 count. Wininger then fell behind in the count 1-2 before taking three straight pitches out of the strike zone to drive in the winning run and trigger a spirited Scottsboro celebration.

“Proud for our guys and proud of them believing in each other that they could get this done,” Smith said.

Scottsboro and Arab were scheduled to conclude their Class 6A Area 15 baseball series on Thursday, but the threat of inclement weather has pushed the conclusion of the series to Friday. Game 2 is set for 4:30 p.m. at Arab City Park with Game 3, if necessary, to follow.