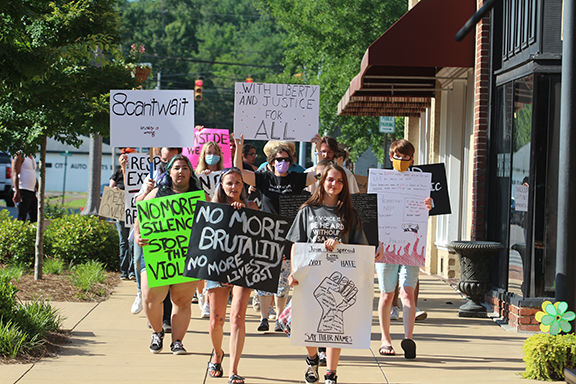 Around 100 protesters marched peacefully around the courthouse square Saturday. 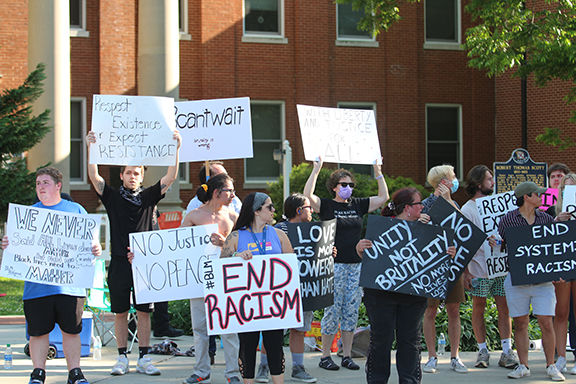 Protesters showed up Saturday in Scottsboro to show their feelings about racism and police brutality. 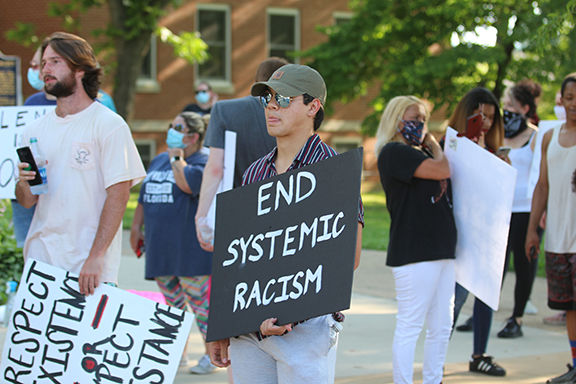 Around 100 protesters marched peacefully around the courthouse square Saturday.

Protesters showed up Saturday in Scottsboro to show their feelings about racism and police brutality.

As the sun beamed down Saturday afternoon, the Jackson County Courthouse Square filled up with mostly young people and few older ones, both black and white and others, too.

With many businesses along the square boarded up and law enforcement vehicles from the Jackson County Sheriff’s Office and Scottsboro Police Department blocking traffic from entering, 100 or more people gathered in a peaceful protest.

They walked around the square, holding signs and chanting “Black Lives Matter,” and “No racism, no hate, stop before it’s too late.”

They also chanted, “I can’t breathe,” in honor of a Minnesota man, George Floyd, a 46-year-old black man who died handcuffed and prone on a street while a white police officer knelt on his neck for almost nine minutes. Floyd, who had been arrested on suspicion of using a counterfeit bill, begged for his life and repeatedly said, “I can’t breathe.”

Earlier last week, Alektra Holt, of Scottsboro, knelt in her driveway with a piece of tape over her mouth in remembrance of Floyd.

Her picture virtually went viral on social media. Holt was one of the leaders of Saturday’s protest.

“One person can make a difference,” she said. “We need to love everybody.”

Khael Sanford said no one is better than anyone else.

“We need to love one another,” said Sanford. “If you break down the wall, you might find out you have a lot in common. Love is love, and love has no color.”

“The police is doing a wonderful job protecting us,” said Joh Ellison.

One man said he was proud of the protest, but to bring about change, people needed to register to vote and then vote.”

“The city of Scottsboro, Scottsboro Police Department and Jackson County Sheriff’s Office would like to thank the demonstrators for their peaceful protest and respect for community and private property,” said Shelton and Latimer. “We will always strive for a strong community relationship with our law enforcement professionals, and we want to keep an open dialogue as issues arise.”

Shelton and Latimer said the city will always promote a safe environment for community members.

“We hear the message of the protesters and support the right to free speech and the right to assemble,” Shelton and Latimer said. “We thank them for sharing their voices in a peaceful way.”