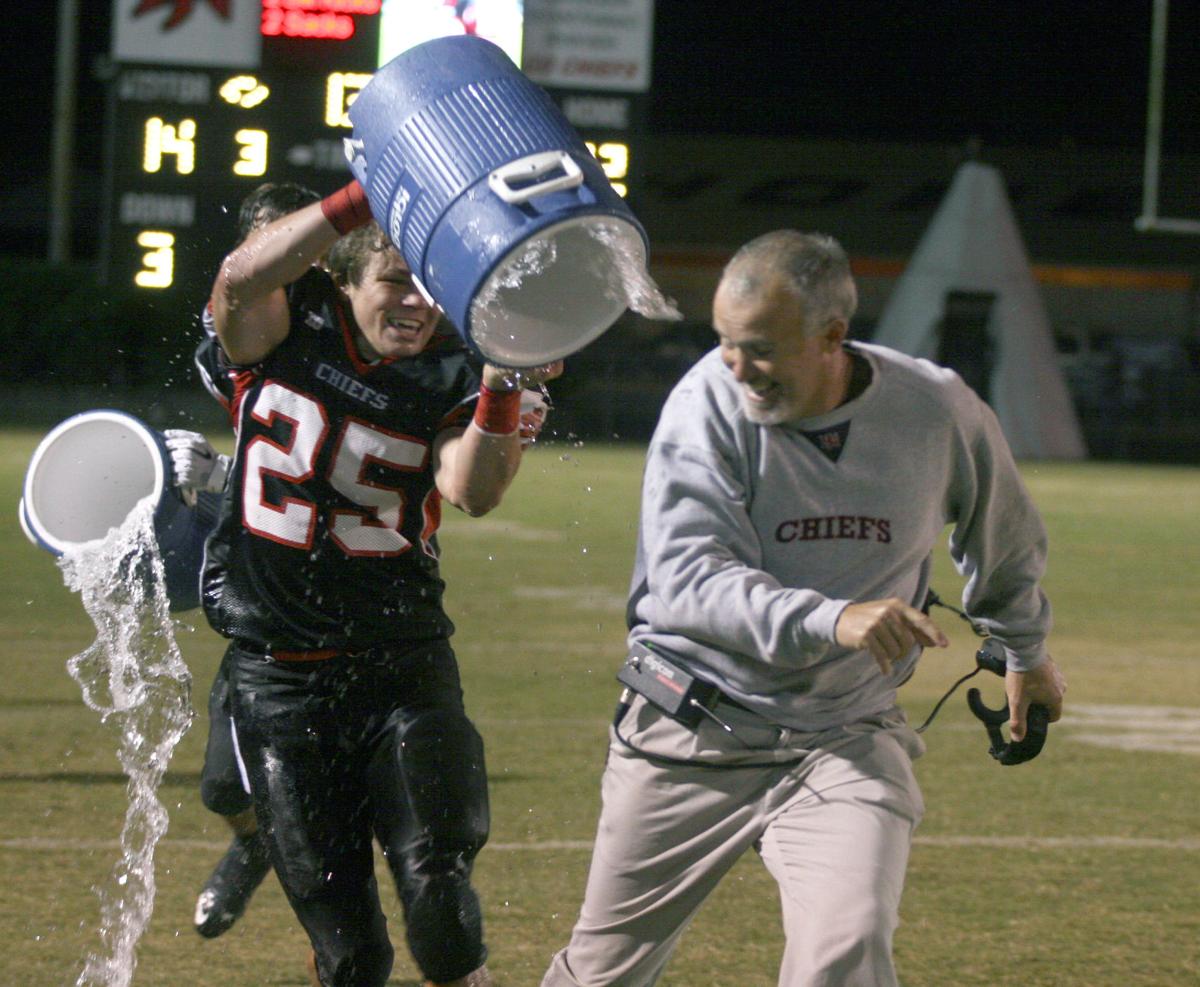 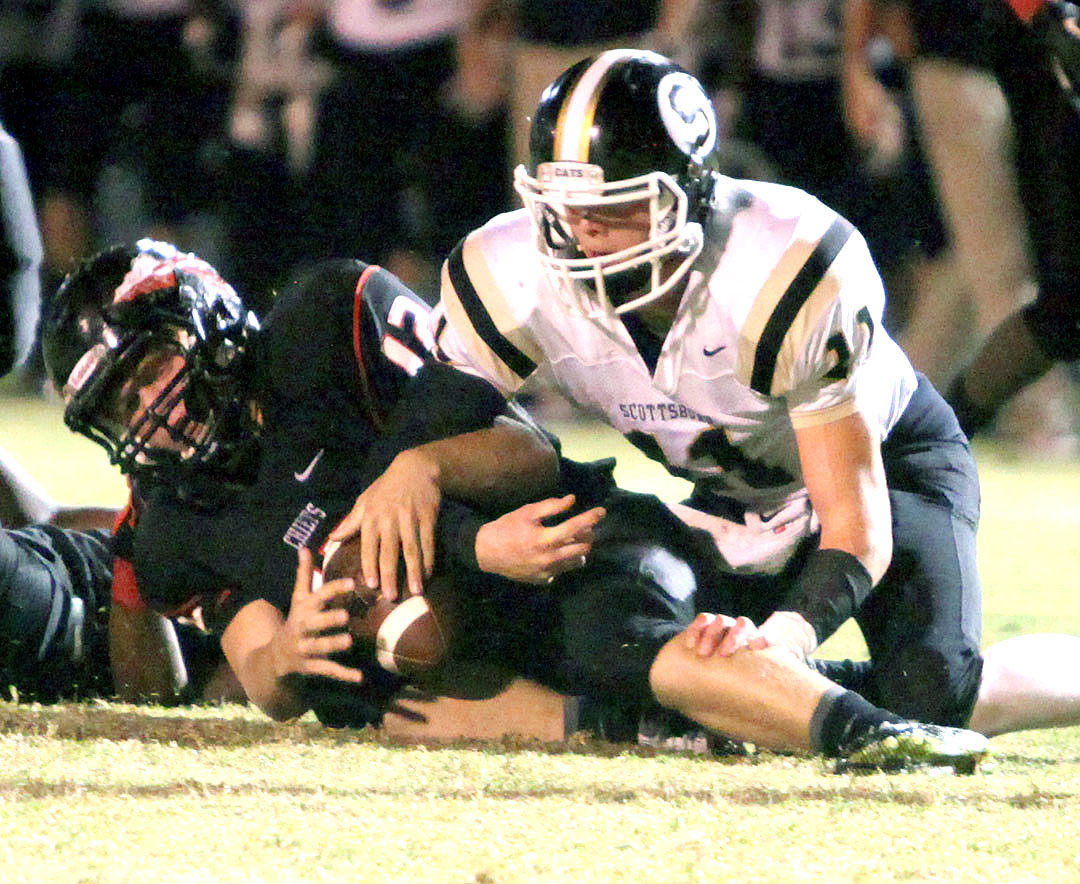 North Jackson's Brett Barbee recovers a Scottsboro fumble with 1:15 remaining in the game to seal his team's 42-39 win in the annual Battle of the Valley rivalry game on Sept. 26, 2014. 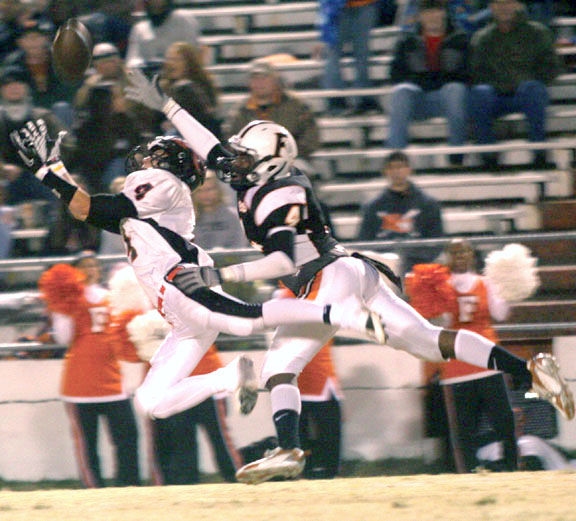 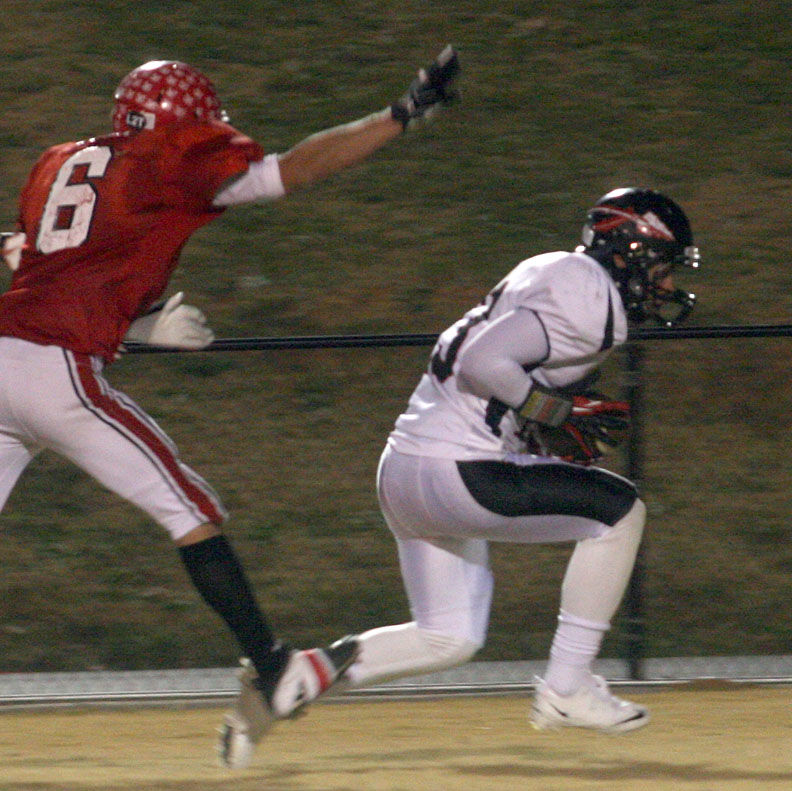 Austin Blevins catches the go-ahead 31-yard touchdown on a fourth-and-13 play during North Jackson's 45-35 Class 4A state playoff win over Central-Florence on Nov. 9, 2012.

North Jackson's Brett Barbee recovers a Scottsboro fumble with 1:15 remaining in the game to seal his team's 42-39 win in the annual Battle of the Valley rivalry game on Sept. 26, 2014.

Austin Blevins catches the go-ahead 31-yard touchdown on a fourth-and-13 play during North Jackson's 45-35 Class 4A state playoff win over Central-Florence on Nov. 9, 2012.

The series began June 13 with Woodville, followed by Section on June 20, Pisgah on June 27 and North Sand Mountain on July 4. Today it continues with a look at 2010-19 decade for North Jackson:

In the highest scoring game in series history at the time — the teams combined for nearly 1,000 total yards and 12 touchdowns — a defensive play decided the game. Scottsboro was driving for the winning score when North Jackson linebacker Brett Barbee pulled the football away from a Scottsboro ball carrier inside the North Jackson 20-yard line with 1:15 remaining to secure the win for the Chiefs.

Trailing at halftime for the first time all season, visiting No. 2-ranked North Jackson outscored No. 10 Fayette County 20-0 in the second half to advance to the Class 4A state semifinals.  After Cesar Diaz kicked a 23-yard field goal for the Chiefs on the final play of the first half, North Jackson grabbed the lead on Zac Barnard’s 5-yard touchdown pass to Montel Hale on the opening possession of the third quarter. Diaz then booted field goals of 38 and 23 yards — Kahne Cooper’s 61-yard catch and run on a third-and-eight play early in the fourth quarter set up the last one — to put North Jackson in front 23-14. After Fayette County missed a field goal late in the fourth quarter, Deuntae Johnson’s 82-yard touchdown run sealed the win for North Jackson. The loss was the last for the state’s then all-time winningest coach, Waldon Tucker, who resigned at Fayette County soon after the loss (Tucker hasn’t coached since, but last month came out of retirement to serve a second tenure at Fayette County.

North Jackson built a 20-6 halftime lead after rushing touchdowns by Kitt Grider and Greg Chubb and field goals of 35 and 19 yards from Cesar Diaz before taking a 27-13 lead on Chubb’s 1-yard touchdown run in the fourth. But Scottsboro pulled within 27-25 after an interception return for a touchdown with 5:09 remaining. Slade Culpepper stopped  Scottsboro’s tying two-point conversion try.  After a North Jackson fumble, Scottsboro kicked what appeared to be a go-ahead last-second field goal with nine seconds left. North Jackson jumped offside just before the snap, however, and the play was blown dead. After the ball was moved up five yards, Donnie Thompson blocked Scottsboro’s re-kick to extend North Jackson’s winning streak against the Wildcats to nine.

North Jackson remained undefeated by rallying in the second half to defeat host Fairview and win the Class 4A Region 7 championship. The Chiefs fell behind 14-0 in the first half and trailed 21-17 late in the third quarter when Brett Smith sacked Fairview’s quarterback, forcing a fumble that Chase Lacy recovered in the end zone for the go-ahead score. North Jackson, which switched to a run-oriented I-formation offense in the second half, got a 42-yard touchdown run from Austin Blevins with 6:32 remaining to seal the victory.

The Chiefs forced a three-way tie for the Class 4A Region 7 championship with a road win over defending 4A state champion Oneonta. The Chiefs had 600 total yards (nine shy of the school record). Running back Octavius Matthews ran for 284 yards and four touchdowns on 20 carries and quarterback Logan Walters completed 11 of 18 passes for 251 yards and three touchdowns while Bray Eldridge had five catches for 141yards and three scores. After No. 5-ranked Oneonta pulled within 28-21 early in the third quarter, Eldridge caught a 72-yard touchdown pass, Johnny Marmolejo kicked a 34-yard field goal and Matthews scored on touchdown runs of 77 and 40 yards to allow the Chiefs seal the win.

North Jackson countered Central-Florence’s comeback with one of its one in the closing moments of the teams’ Class 4A first-round playoff game. Trailing 35-31 with just over three minutes remaining, Austin Blevins caught a 31-yard touchdown pass from Kitt Grider on a fourth down-and-13 play to give the Chiefs the lead. After the North Jackson defense forced Central-Florence to turn the ball over on downs, Devonta Hutchins’ 29-yard touchdown run with 1:20 salted away the Chiefs’ eighth-straight first-round playoff win. Hutchins ran for a career-high 154 yards and four touchdowns while Grider was 15-of-25 passing for 295 yards and two scores.

The Chiefs improved to 11-0 by holding off upset-minded Cleburne County in the first round of the Class 4A playoffs, giving the school’s then 24-year old football program its 225th all-time victory. Cleburne County enjoyed a 14-7 lead in the first half, but Daqwan Lowrance caught touchdown passes of 55 and 19 yards from Kitt Grider to give the Chiefs a 21-14 halftime lead. With the game tied 21-all, North Jackson moved back in front 28-21 on Grider’s 19-yard touchdown pass to Kahne Cooper. Cleburne County tied the game at 28-all early in the fourth quarter, but Cooper’s 7-yard touchdown run with 8:14 left turned out to be the winning score.

North Jackson ended a three-game losing streak to its archrival with the largest margin of victory for the Chiefs in series history. After recovering a Scottsboro muffed punt early in the first quarter, North Jackson got touchdown runs of 16 and 1 yard from Tanner Woodall and 76 and 11 yards from Lee Witherspoon, who added a 66-yard interception return for a score that gave the Chiefs a 35-0 halftime lead. Witherspoon, now a sophomore running back at Mississippi State, added a 68-yard punt return for a touchdown in the second half while Korre Smith had a 12-yard touchdown run and Travis Woodall caught a 9-yard touchdown pass from his twin brother, Tanner.

Keeping with the down-to-the-wire theme of the teams’ recent series, North Jackson survived three Guntersville attempts to take the lead in the fourth quarter. The Chiefs, who trailed 14-7 in the first half, took a 20-14 halftime lead after Kitt Grider threw touchdown passes of 4 yards to Dwight McGowan and 15 yards to Dakota Garner. Cesar Diaz’s 19-yard field goal put the Chiefs in front 23-14 late in the third quarter, but Guntersville pulled within 23-21 with 11:04 remaining. Guntersville’s next two possessions ended at its 29- and 40-yard line respectively. North Jackson tried to run the final 1:27 off the clock, and appeared do so as time expired on Grider’s fourth-down run. The officials however ruled there was one second remaining, giving Guntersville one last shot. But Guntersville’s Hail Mary pass as time expired was intercepted by North Jackson’s Dylan Stewart.