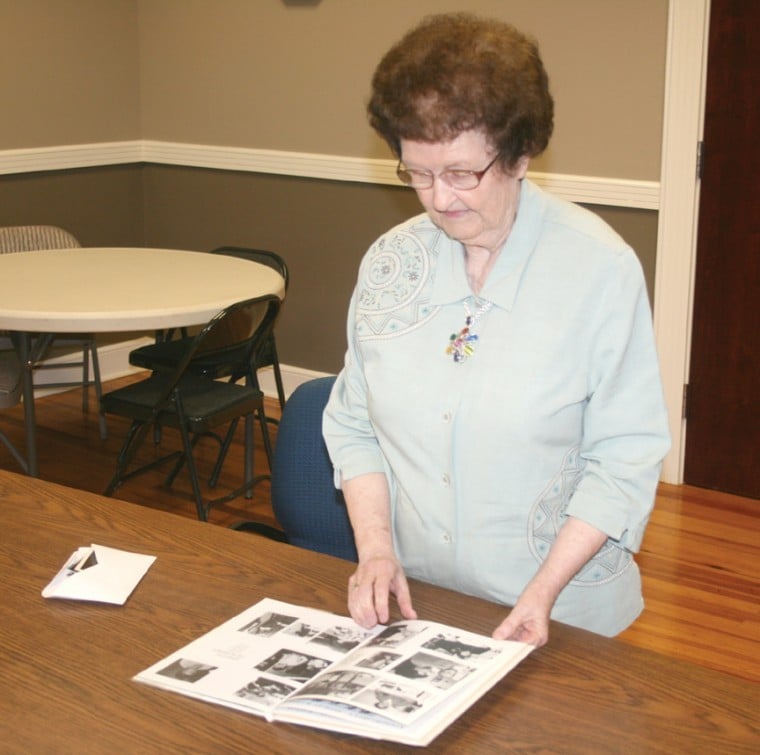 Eloise Maynor looks back through a Nelson Elementary School yearbook recalling friends and students from years long ago. 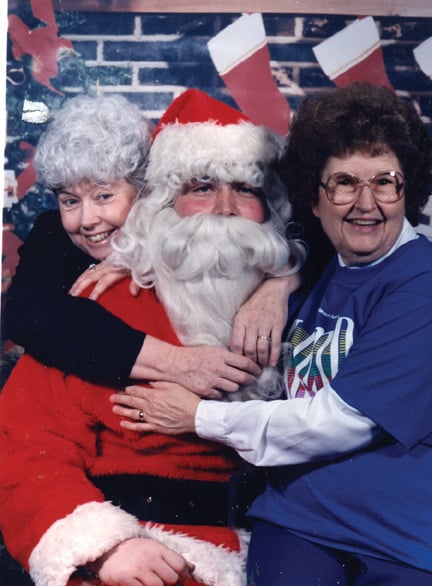 Eloise Maynor, right, and Janie Barbee give Santa a hug when the two worked together in the Scottsboro School System.

Eloise Maynor looks back through a Nelson Elementary School yearbook recalling friends and students from years long ago.

Eloise Maynor, right, and Janie Barbee give Santa a hug when the two worked together in the Scottsboro School System.

Forty years is a long time. It can feel like an eternity or it can seem to fly by.

For Eloise Maynor her time working in the Scottsboro City School System has been enjoyable. You could say 40 years has flown by.

She retired once, but was called back into service by then superintendent of education Dr. Charles Carrick shortly after her son, Steve, died in 2000. Her husband, Grady, who worked with Word Lumber Co., Mead Hardwoods and later at Moss Hardwoods, died a year earlier in 1999. She’s glad she returned.

“Dr. Carrick was so persuasive,” she said. “He made it sound like they really needed me. He made it so easy so I went back for just a few hours per week.”

Maynor, 76, says she’ll hang it up for good when the 2012-13 school year ends going from semi-retired to retired. But, that gives her one more year to change her mind.

“I know that I need to give this job to someone else,” she says unconvincingly.

Her coworkers say she can’t leave. Maynor, who currently works 20 hours per week as a receptionist at the system’s central office, doesn’t sound so sure herself.

“It will be hard to leave the family that I’ve had so long,” she admits. “Mr. Wendell Page used to tell me, ‘Mrs. Maynor, I believe you and I have locked more doors than anybody.’”

Maynor is a much-beloved fixture throughout the system. She worked at one time or another at every school except the new Scottsboro High School. In a 1980 or 1981 Nelson Elementary School annual — it doesn’t have a date — she was fondly dubbed “The First Lady” under a photograph showing her sitting at her desk. She was the secretary at the school at the time.

“Ms. Eloise is a joy and a blessing in our office,” superintendent of education Dr. Judy Berry said. “We love and appreciate her and I am thankful to be able to call her my friend.”

“Dr. Berry has been so good to me. She’s got a heart as big as this building,” Maynor said.

Even those she has worked with who have long retired stay in touch. Her Nelson friends — she left there the first time she retired in about 1998 — still call to check on her or stop by to take her to lunch.

Maynor’s first year at the school was in 1979 when she served as a reading aide. After that she was the school secretary until her retirement.

“They’re still my family,” she says without hesitation. “Nelson was my special place. There were special teachers, students and parents. We had such wonderful principals and teachers. There wasn’t a day that I didn’t love going to work.”

Maynor worked under five principals at Nelson, beginning with Jerry Chrisman. She also worked with Fred Thomas, Steve Hamlet, Hal Luse and Carolyn Thomas. But, there is a soft spot in her heart for Chrisman, who died at a young age in February 1990 after a tough battle with cancer.

“He was wonderful with the teachers and the kids too,” she said. “It was just the best with Jerry Chrisman and that group. We knew we were going to lose him so that was a hard time for all of us.”

Fred Thomas deserves credit. He came to the school to fill in while Chrisman was sick and served on an interim basis after he died.

“Mr. Thomas was so good to us. He was good to work with,” said Maynor.

Maynor’s career in education began almost by accident. She had worked for Dr. Otis York as a dental hygienist and would fill in for Dr. Ralph Sheppard from time to time when he needed help, but was content serving as a homerun mother and volunteering at the school. Several teachers suggested she get on the substitute teachers list, thus began a long tenure of service to students, teachers, administrators and the public.

Education is a career Maynor embraced from the start. She still does today.

She laughs, recalling her toughest substitute assignment at Scottsboro Junior High School. It seems the school was without a band director for a time and she drew the task of holding study hall for the students. They were apparently more than a bit rambunctious.

“Back then substitute teachers got paid $6 per day,” she said. “I was glad when Alan Lee took the job.”

Maynor stayed busy as a substitute. She filled in for many people long term on medical or maternity leave and enjoyed her time in the classroom. During one such extended stay Judy McCrary – now a school board member – did her student teaching with Maynor.

When hunting season rolled around, Maynor knew she would be in the diversified occupations classroom filling in for J.O. Porch who loved to hunt with his dogs.

“She knew I didn’t like math,” Maynor said of Marley Hambrick who taught the subject at Scottsboro Junior High School. “She was a math whiz. I subbed for her for about six weeks one time and she recorded each lesson in advance so I would be able to review it and know how to teach the class each day. I knew how to explain that math to the students.”

Maynor did have a favorite age to teach as a substitute. She makes no bones about it.

“I loved the little ones the best,” said Maynor. “I love children and they love you back.”

It wasn’t long before Maynor was in the classroom full time. First she was a reading aide and later she became a special education assistant. She had to take classes at Calhoun Community College in Decatur before moving into to special education.

In those roles she worked with small groups, individually with students who needed more personalized assistance and helped teachers by preparing tests and grading papers.

Finally, after about four years as an aide, she moved into the secretarial role where she had to be a Jack, or Jill, of all trades.

“It was a lot different,” Maynor said. “I always had great help from the parents. They were wonderful.”

At Nelson being a secretary meant taking care of all clerical duties and being a record keeper. She also had the responsibility of being a receptionist and bookkeeper. Beyond that – there were no school nurses – she was the person who sick or injured students went to see.

“I gave medicine,” she said. “If a child couldn’t swallow a pill I would mix it with Jello and it would go right down.

It is obvious Maynor cared for the children who roamed the halls.

“I’ve even pulled a few teeth. You might be surprised what they would let you do for a quarter,” she said with a smile.

During her time with the school system she has worked for five superintendents. It began with Dr. T.T. Nelson, the man for whom the elementary school she loves so much is named. She then worked under Max Skidmore, John Ballentine, Charles Carrick and now Dr. Berry who sings Maynor’s praises.

“As our part-time receptionist she meets the public in a very cordial manner and is always professional with everyone. Her personality is outstanding and she provides us with humor on difficult days,” Berry said. “She handles so many tasks for our Central Office personnel that we would never have time to complete.”

Maynor and former employee, Joy Wininger, began keeping scrapbooks of news reports on the school system years ago. She still does the same thing today and says that each year is neatly filed in cabinets as a history of the schools and the students.

The move to the Page Administration Building was smooth, according to Maynor. She says the offices, now about five years old, have more room as do the meeting rooms. To top it off everyone now has their own workspace, computer and telephone.

“It’s been a big step forward,” said Maynor who has her eye on the future of the building.

“My greatest ambition is that before I leave this world that I will see the Page auditorium finished. We’re working on it now.”

The office staff is close. Maynor appreciates the way she is accepted and says that the people get along, work well together and are always there to help out when somebody in the system has a problem.

“If somebody needs anything everybody just pitches in to help.”

Alan Garner, the systems director of federal programs, is one who gives Maynor a little ribbing from time to time.

“He calls me ‘Ms. Google,’” Maynor says, “cause if I don’t know anything I’ll just look it up. Everybody says I pet him and Patricia (Potter Combs), but I really don’t.”

Maynor has adapted to technology. She is comfortable in the computer age and says she wouldn’t know what to do without it at work.

She’s taken it a step farther and uses her own computer at home to remain a life-long learner. Maynor even has a Facebook page to stay in touch with friends and she takes some kidding about it from her coworkers. Heck, she’s even got the new Timeline on the social media network.

“Patricia and Tony LaRue make sure I have whatever I need on my computer at home. When you live alone that (computer) helps a lot,” said Maynor.

“I wish that every organization could have a person like Eloise Maynor,” Dr. Berry said. “Her contributions to this school system are many and I am glad that I have the privilege to know her and to work with her.”

Maynor smiles when talking about her coworkers.

“There’s not a one of them that I don’t love. It’s just like being with a family,” she says. “They make me feel so needed and I know they would come at anytime I need them.”