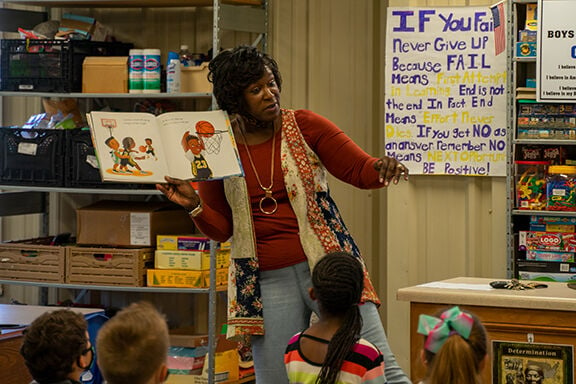 Scottsboro City Council member Nita Tolliver reading “I Promise” by LeBron James to students in the Boys and Girls Club after school program. 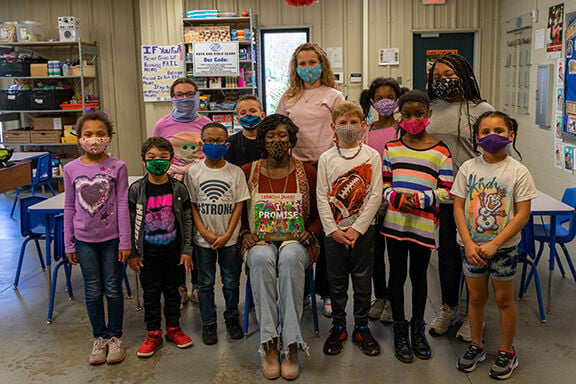 Scottsboro City Council member Nita Tolliver posing with students in the Boys and Girls Club after school program after she spoke about Black History Month and read them “I Promise” by LeBron James.

Scottsboro City Council member Nita Tolliver reading “I Promise” by LeBron James to students in the Boys and Girls Club after school program.

Scottsboro City Council member Nita Tolliver posing with students in the Boys and Girls Club after school program after she spoke about Black History Month and read them “I Promise” by LeBron James.

In recognition of Black History Month, Scottsboro City Council member Nita Tolliver visited the after-school program at the Boys and Girls Club at the Ben Sanford Center. While talking to students she told them to persevere and to “reach for the stars” to achieve their dreams.

While reading a book by LeBron James, Tolliver — who by day works as an educator at Caldwell Elementary School — described her own humble beginnings growing up in Scottsboro.

Tolliver described that only a few blocks away was the house where her grandmother lived while she was growing up, and she described how she remembered walking by the exact spot where the building she was reading in now stands.

While talking to the students, she described that hard work and determination are the most important things to being able to succeed at your dreams, adding that every day students go to school and learn something new it becomes something they will have forever.

"You're making progress and history every day," said Tolliver. "every day you go to school you're making history"

She added that because of this, Black History Month isn't just about February and Black history isn't, and shouldn't be, confined to a single month every year; instead, Tolliver said that it needs to be celebrated all the time.

"Black history is not just about this month," Tolliver told the children.

The book Tolliver was reading to the students James' "I Promise," is the basketball phenomenon's first foray into writing children's books and starts out by saying "I promise to work hard and do what's right, to be a leader in this game of life."

The book discusses effort and perseverance while reminding children to have dreams and be kind to each other while remembering to "stand up for what's right."

"To reach for my stars even when I can't see it," the book reads.

Tolliver expounded on this while talking to the children.

"We all have dreams, everyone I see here are dreamers," said Tolliver "I wouldn't be a council woman if I didn't have my upbringing on North Houston Street."

Tolliver also took time while talking to the students to teach them about her job as a city council member and explain how their local government works.

"It's all about a work ethic and to dream," added Tolliver, who noted that it was her ability to dream and her work ethic that lead her to be able to win her seat on the city council and reminded students that they too could achieve their dreams if they worked hard.