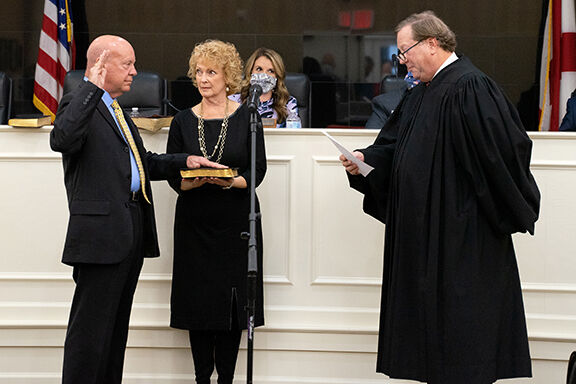 District Judge Don Word swears in Jim McCamy as the new mayor of Scottsboro as McCamy’s wife, Laura, looks on. 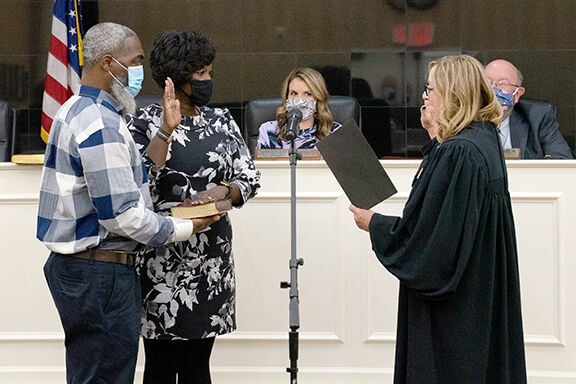 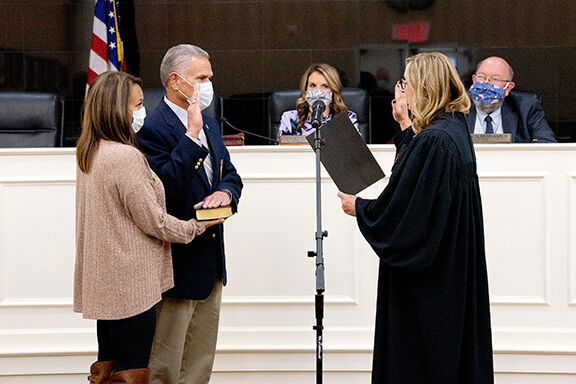 District Judge Don Word swears in Jim McCamy as the new mayor of Scottsboro as McCamy’s wife, Laura, looks on.

Jim McCamy, a former EMA professional and Scottsboro native, was sworn in as the new mayor of the city of Scottsboro. During the Nov. 2 ceremony, Ralph Dawe and Nita Tolliver were sworn in as members of the city council.

McCamy said that he has already begun to work on his plan with a meeting with department heads occurring Monday morning. The new mayor was also involved in crafting the municipal budget passed by the Scottsboro City Council — 90% of which was allocated on Oct. 26.

“These guys are on these roads every day, so these guys are going to know,” McCamy said that once a list of roads is created that he will approach the Water Sewer and Gas Board to understand any upcoming projects to avoid wasteful spending, and then the city council with his recommendations.

Despite the emphasis that McCamy put on roads, the larger than $20 million budget provides a similar amount as previous years for paving the city’s roads — roughly $200,000.

“I don’t have a problem with that,” said McCamy regarding the funds, adding that over “the last two or three years, there’s been money left on the table. If anything, we’ll be going back and asking for more.”

He also stated that he feels confident the council will be willing to work with him to solve the problem.

McCamy noted that the process to determine where these funds are used needs to involve all of the department heads. He believes their experience driving the roads each day will provide valuable insights into crafting an effective and equitable plan for the city of Scottsboro.

A plan that he hopes to have drafted by the end of the month.

“We’re going to work to make Scottsboro more business friendly” said McCamy. He plans to work with the Scottsboro Zoning Board in those who inspect new developments to understand how to create positive change for developers building in the city.

McCamy plans to gauge his success in making Scottsboro more business friendly, by talking to those developers and business owners and engaging them in the process to ensure that the changes are effective.

“If you don’t include your stakeholders, you’re not going to be successful,” said McCamy. “They have to have input as much as possible.”

McCamy now takes control of a city that has decided it wants change. All members of the Scottsboro city government up reelection — the mayor and two city council members — were defeated by challengers.

Dawe retired as the police chief of the Scottsboro City Police Department in June 2020, after a decades long career in the Department and being unanimously appointed to the position in 2006, before running for City Council Place 1.

He added that he feels that he’s built good relationships with the city council and other members of Scottsboro’s government due to his time as Scottsboro’s police chief.

“We’ve got some good things ahead of us,” said Dawe. “I think we’ve got a good team up here to move Scottsboro forward”

Tolliver, an educator in the Scottsboro City Schools system and assistant coach of the Scottsboro Lady Wildcats, won the election for City Council Place 2 and said that she’s ready to work to make the City of Scottsboro a better place.

"I'm here to work for the citizens,” Tolliver said in an interview after winning a runoff election for Place 2 adding that, “now the hard work has begun."

While on the campaign trail, Tolliver repeatedly told voters that while she may not have all the answers now, but that she has the passion to find them and do the right things for the city of Scottsboro.

During a radio interview shortly before the election, Tolliver said that Scottsboro is an amazing place, but needs some work to continue to grow and be welcoming to businesses and residents. When asked to elaborate on the remarks she emphasized that her remarks come from a place of love and hope for the future.

"I'm representing all the citizens of Scottsboro and I'm here to with the utmost respect of the city,” said Tolliver. “I want to move us forward. I want to move us into a position where we can all work together to be the city we can be."

The Scottsboro City Council will meet again on Monday, Nov. 9.