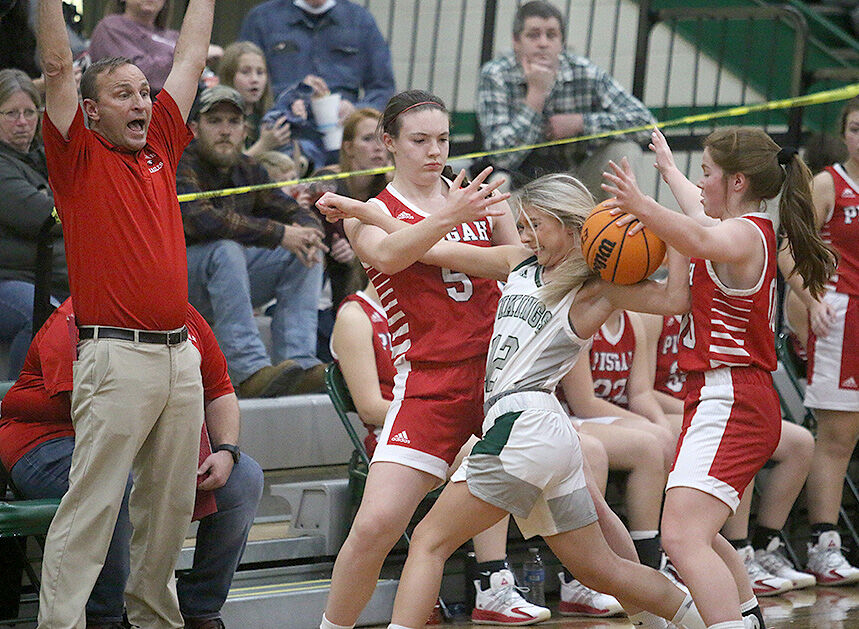 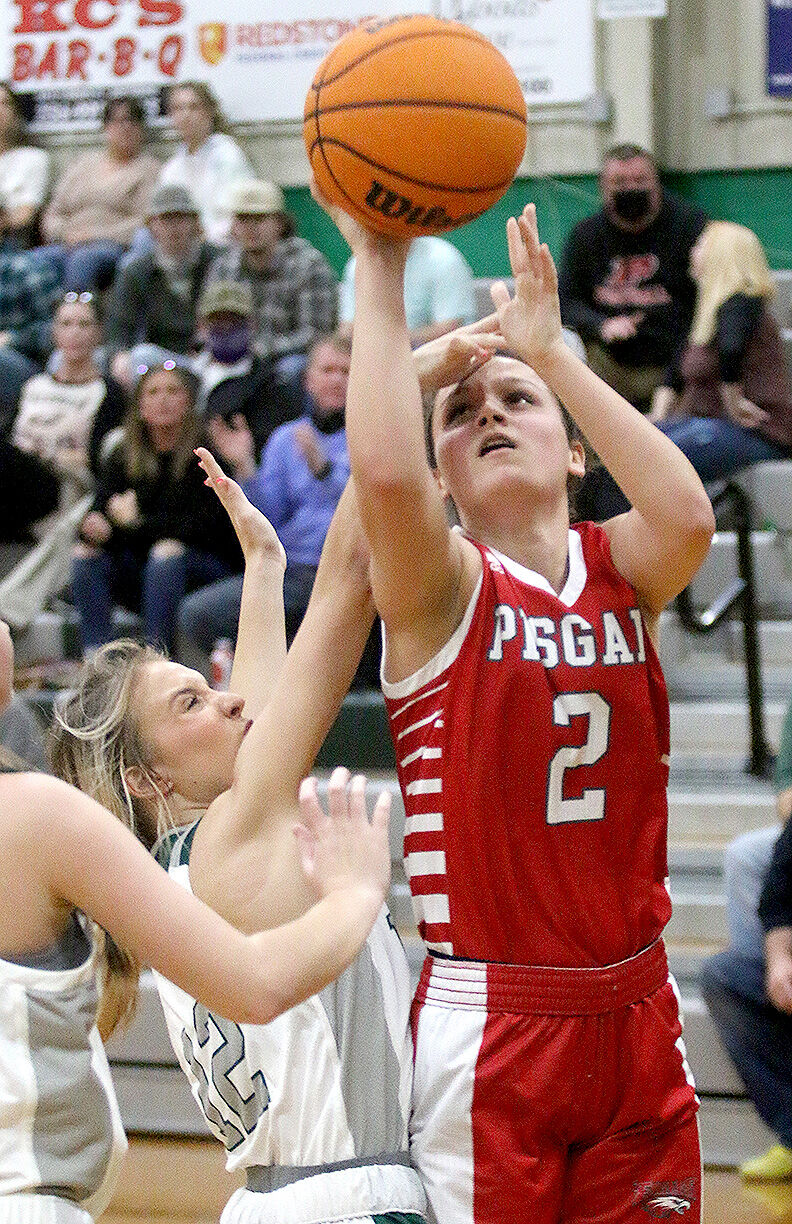 Kallie Tinker (2) gets inside for a short bucket as Skyline's Morgan Sanders rotates over to challenge the shot attempt during Class 2A No. 1-ranked Pisgah's 65-49 win over 1A No. 1 Skyline. 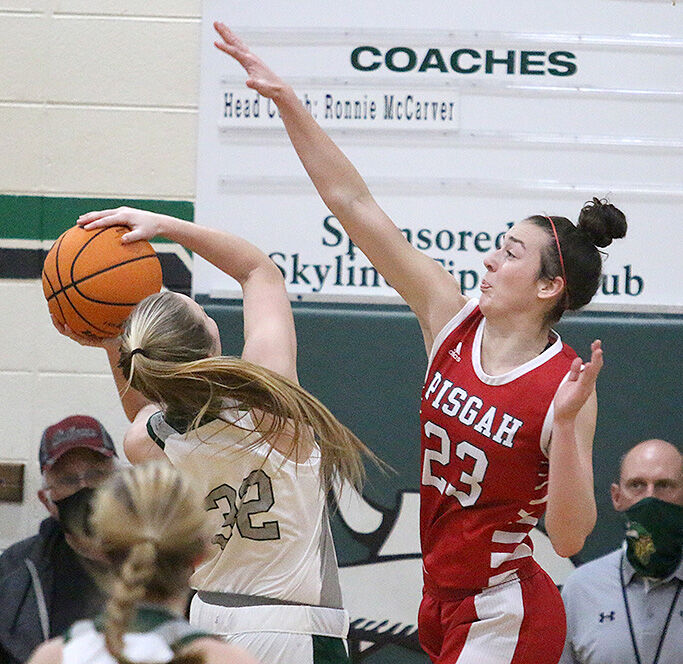 Pisgah's Molly Heard (23) tries to block a layup attempt by Skyline's Gracie Stucky during the teams matchup Tuesday night. Class 2A No. 1-ranked Pisgah defeated 1A No. 1 Skyline 65-49. 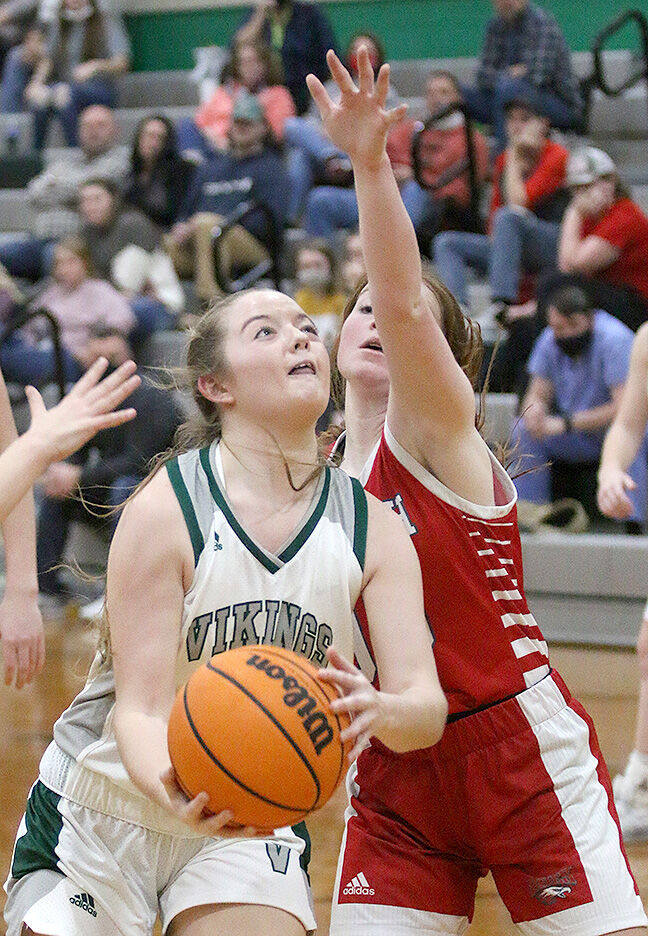 Kallie Tinker (2) gets inside for a short bucket as Skyline's Morgan Sanders rotates over to challenge the shot attempt during Class 2A No. 1-ranked Pisgah's 65-49 win over 1A No. 1 Skyline.

Pisgah's Molly Heard (23) tries to block a layup attempt by Skyline's Gracie Stucky during the teams matchup Tuesday night. Class 2A No. 1-ranked Pisgah defeated 1A No. 1 Skyline 65-49.

The Pisgah varsity girls basketball team entered a battle of No. 1-ranked teams at Skyline with as many losses this season as the program had the previous three seasons combined (five).

That has led to some questions for the tradition-rich program that won the last three Class 3A state titles before dropping to 2A this season.

“There’s been a big question mark this year. That question mark’s been about their level of determination,” said Pisgah head coach Carey Ellison. “We’ve heard that were not hustling, playing soft. We’ve just been harping on our effort for four quarters. A big part of that is crashing the boards and just playing faster. I’ve been trying to drive that home that we’ve got to have everybody playing hard, playing with energy and enthusiasm.”

“I felt like we had that energy and enthusiasm tonight,” Ellison said. “We’ve got to carry it over day by day. Hopefully we’ve learned our lesson that we’ve got to bring it every night.”

The win was Pisgah’s 51st consecutive victory against fellow Jackson County teams. The Eagles’ last in-county defeat was a loss at Scottsboro on Jan. 27, 2015.

Meanwhile, the setback ended Skyline’s 23-game home winning streak. The Vikings’ last loss on their home court was to Madison County on Jan. 15, 2019.

Skyline coach Ronnie McCarver’s team shot just 7 of 35 from the 3-point arc, including 2 for 18 in the first half, and were outrebounded by the Eagles, who grabbed 24 offensive rebounds.

“We’re so small and they killed us on the board,” McCarver said. “They outhustled us to all the loose balls. We usually can turn teams over more, but we were getting so lost (in the press). I don’t know, maybe it’s just Pisgah. Pisgah, they show up, and we just go crazy. We haven’t played like that all year.”

Skyline missed their first five 3-point shot attempts while Pisgah was hot early, building a 9-2 lead after Kennedy Barron’s three-point play. The Eagles, who never trailed, led 13-10 after one quarter before stretching their lead to double digits at 30-20 on two Kallie Tinker free throws with 1:22 left in the half. After Gracie Stucky sank a 3-pointer for Skyline 13 seconds later, Pisgah closed the half on 8-0 run on Tinker’s basket, Karlee Holcomb’s 3-point play after Emma Ellison’s steal and Molly Heard’s look-ahead pass and Tinker’s 3-pointer with 12.8 second to go until halftime.

“That (run) was really important, gave us some extra (momentum),” Carey Ellison said.

Pisgah’s lead never dipped lower than 11 points in the second half. The Eagles, who were in front 53-37 after three quarters, led by as many as 19 points at one point.