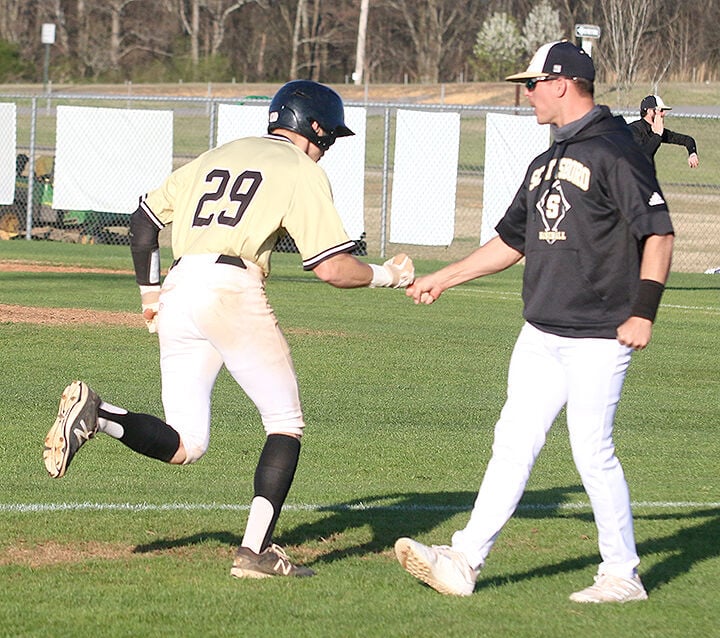 Gavin McCrary (29) is congratulated by Scottsboro head coach Jess Smith after hitting a grand slam during the sixth inning of Scottsboro's 12-6 win over West Point. 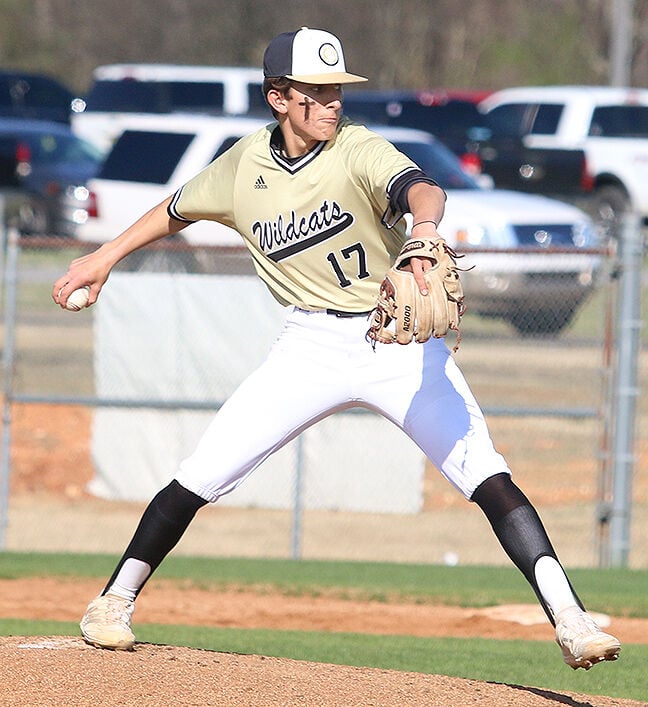 Connor McLaughlin pitched a complete game on the mound with four strikeouts as Scottsboro posted a 12-6 victory over West Point. 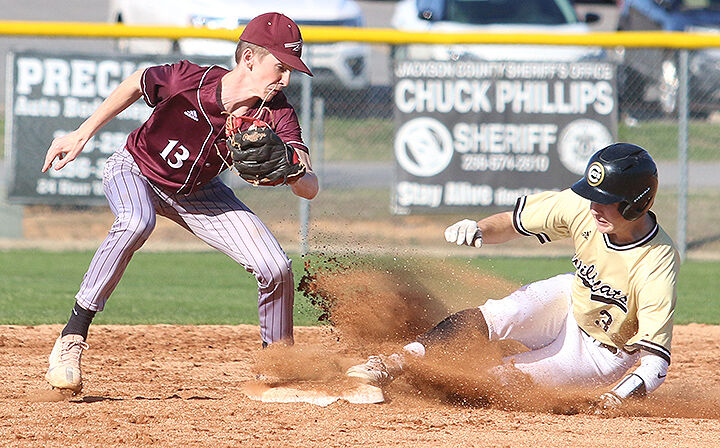 Sam Bryant (3) slides into second base after hitting an RBI double during Scottsboro's 12-6 victory over West Point.

Gavin McCrary (29) is congratulated by Scottsboro head coach Jess Smith after hitting a grand slam during the sixth inning of Scottsboro's 12-6 win over West Point.

Connor McLaughlin pitched a complete game on the mound with four strikeouts as Scottsboro posted a 12-6 victory over West Point.

Sam Bryant (3) slides into second base after hitting an RBI double during Scottsboro's 12-6 victory over West Point.

The ball jumped off of Gavin McCrary’s bat, and the junior was hoping it would get down to drive in a run or two.

As he rounded first base, the celebratory scream from Scottsboro head coach Jess Smith let him know he’d done more than that.

“In practice, I hit those and they usually hit the fence, so I was booking it to first (base),” McCrary said. “I didn’t know it was out (of the park). I didn’t expect it to, but when I heard coach Smith yelling and screaming, it was like ‘ I actually just did that.’ For it to be a grand slam, man that’s awesome. I just got to thank God for that one.”

After West Point rallied from a five-run deficit with a six-run fourth inning, Scottsboro (11-9) responded in a big way to earn the much-needed victory, Smith said.

“Good to have a game like this one when we’ve lost some tough ones to North Jackson, lost in extras Thursday night to a really good Huntsville team. There for a little bit, it felt like, ‘oh no is it going to happen again.’ But our guys were committed to the process,” Smith said. “For whatever reason, we’ve had (opponents have a big inning) on us a few times the last few weeks. We’ve been preaching to our guys it’s OK, and how you respond is everything. Those things are going to happen in the game of baseball. It’s easy when you punch somebody in the mouth early, but what do you do when you get punched back. It was good to see our guys not panic.”

Connor McLaughlin pitched a complete game to earn the win on the mound for the Wildcats. He totaled four strikeouts while allowing six runs (four earned) on four hits and two walks, with all of West Point’s runs coming in one inning. Despite the rocky inning, Smith said the Wildcats had faith that McLaughlin would seal the deal.

“I looked at (pitching) coach (John) Knighton (in the fifth) and he shook his head no, so we left Connor in to fight through,” Smith said. “He may not be our pitcher with best stuff, but day in and day out, that dude is a competitor. That’s exactly what he did. After that, we tied it up, and (McLaughlin) goes 1-2-3 innings. We take the lead, and he goes 1-2-3 inning. That’s huge, but we’ve come to expect that from Connor.”

At the plate, Ethan Wininger went 2-for-3 with two RBIs for Scottsboro and Collin Perkins went 2-for-4 with an RBI while McCrary was 1-for-2 with a grand slam, four RBIs and two walks and Caleb Lynch had one hit and two RBIs.

The Wildcats jumped out to a 4-0 first-inning lead. After singles from Perkins and McLaughlin and a walk from Waylon Farr loaded the bases, Wininger drew an RBI walk, Lynch had a two-run single and Sam Bryant had an RBI groundout.

Scottsboro moved in front 5-0 in the third after Camden Matthews walked and later scored on West Point error.

After West Point took a 6-5 lead in the top of the fourth, Scottsboro tied it when Farr scored on Wininger’s RBI single in the bottom of the inning. The Wildcats then moved in front 7-6 in the fifth when Bryant scored on Perkins’ RBI double.

In the sixth, Trey Cooper was hit by a pitch with the bases loaded to drive in a run and push Scottsboro’s lead to 8-6, and McCrary followed with a grand slam to push the Wildcats’ advantage to 12-6.

“The homer was him being competitive with two strikes,” Smith said of McCrary. “Grind out at-bats and take what they give you. It’s a commitment to being tough in the box.”