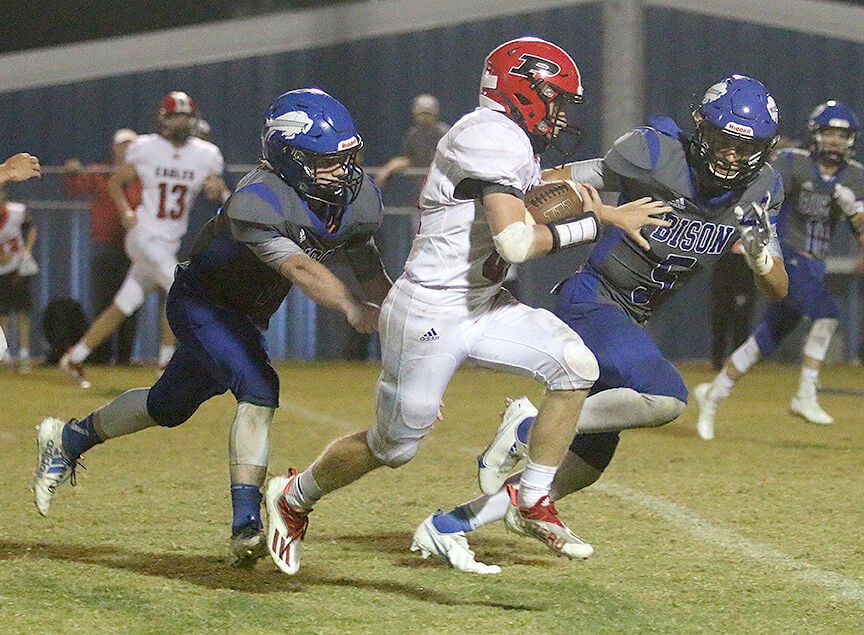 Pisgah's Legion McCrary gets away from NSM's Hank Farmer (left) and Derek Bearden for a 35-yard touchdown during Pisgah's 44-20 win Friday night in Higdon. 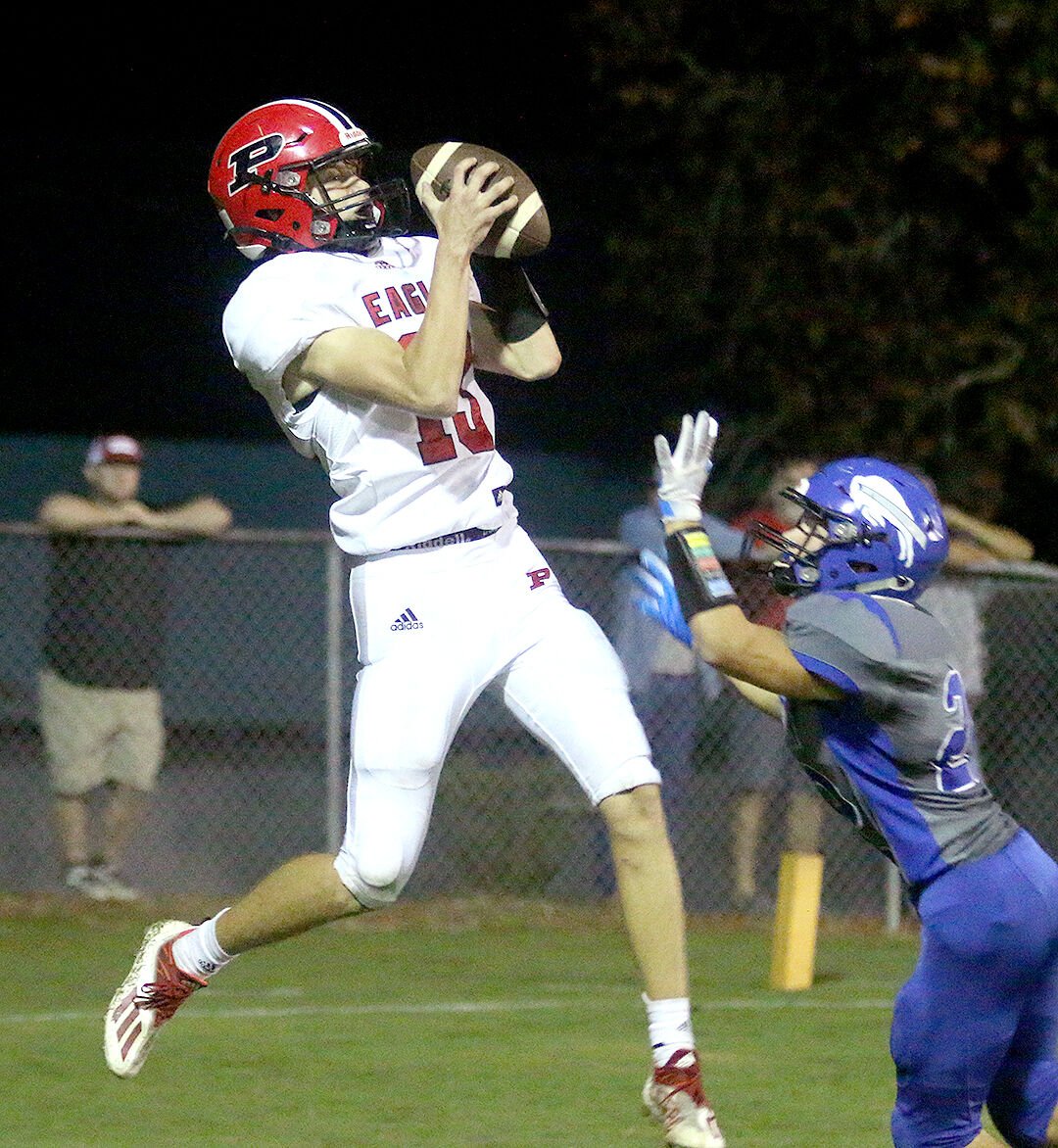 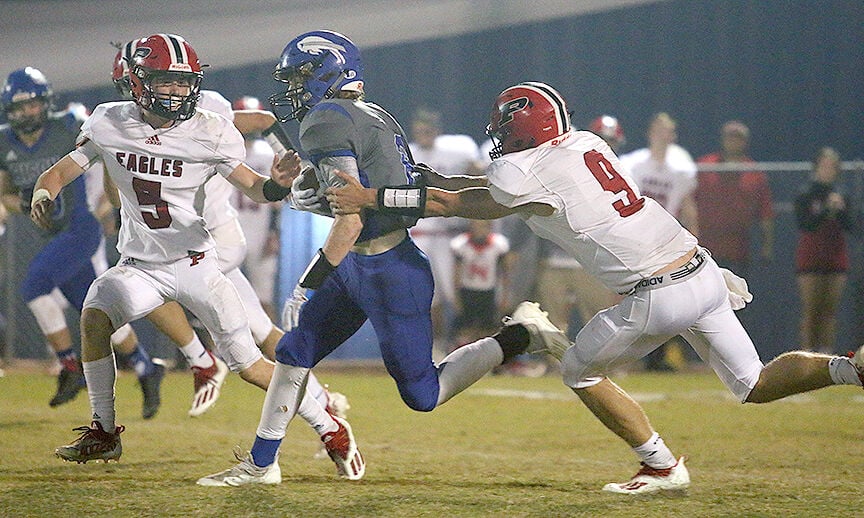 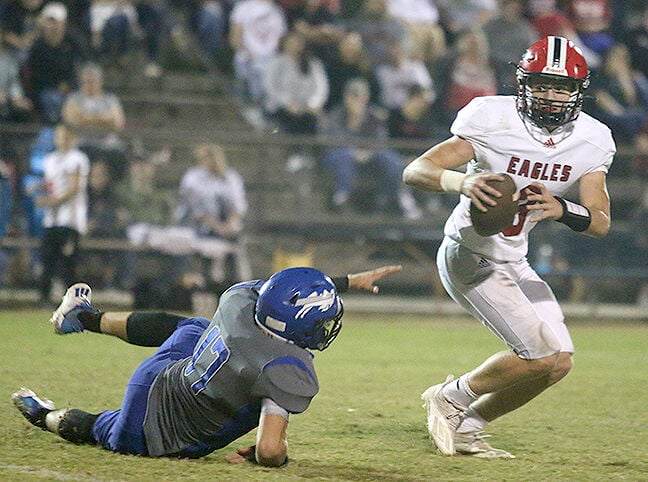 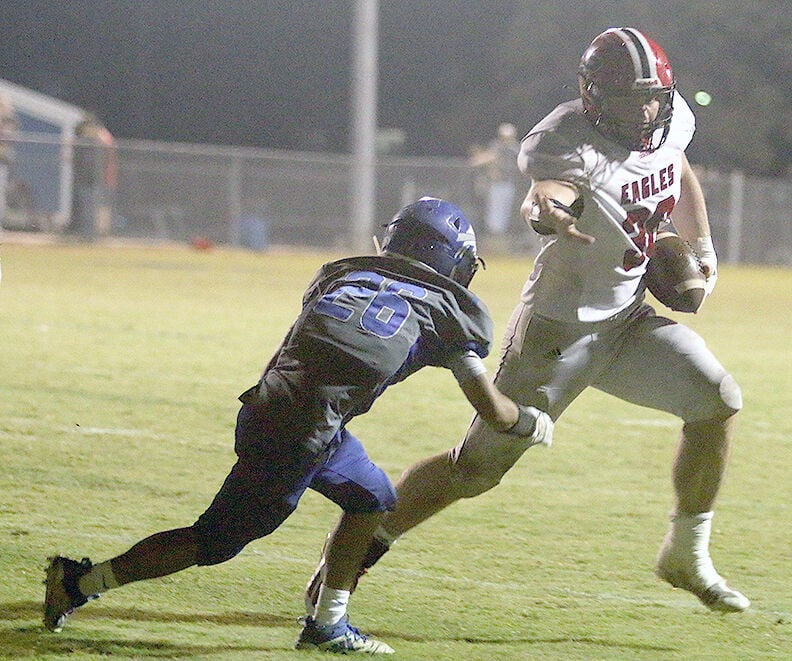 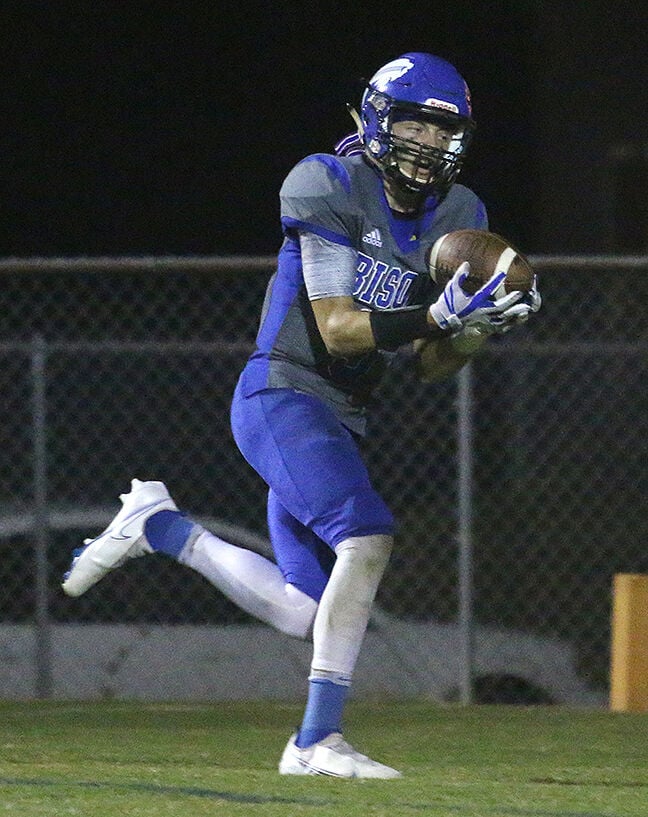 Pisgah's Legion McCrary gets away from NSM's Hank Farmer (left) and Derek Bearden for a 35-yard touchdown during Pisgah's 44-20 win Friday night in Higdon.

It’s hard to keep a good offense in check.

North Sand Mountain did so for a half, but Pisgah showed over the final two quarters why it is Class 2A’s third-highest scoring team.

The Eagles scored 38-second half points, netting touchdowns on all five of its second-half possessions to rally for a 44-20 Class 2A Region 7 win Friday night at Lloyd Dobbins Field in Higdon in the 51st meeting between the teams.

The win snapped Pisgah’s four-game losing streak to the Bison, it’s longest ever to its rival.

“This might be the biggest (win) yet,” said fourth-year Pisgah head coach Luke Pruitt. “These guys have had our number the last few years. We figured out a way to get a win. Proud of our kids.”

After being stymied by NSM’s defense throughout the first half, Pisgah finally got on the scoreboard with 1:24 left in the second quarter on Mason Holcomb’s 12-yard touchdown pass that pulled the Eagles to within 14-6 at halftime.

A bizarre bounce on an onside kick attempt set North Sand Mountain up at the Pisgah 31 on its first second-half possession, Smith scored a 26-yard touchdown run on a fourth down-and-four in which he pushed the pile the entire way for the score to put NSM up 20-6 with 9:35 remaining in the third quarter.

But the Eagles took charge after that, getting a 3-yard touchdown run from Rhyan Barrett, a 22-yard Holcomb-to-Jake Hendricks touchdown pass and Holcomb’s two-point conversion pass to Grant Smith to take a 22-20 lead into the fourth quarter.

After forcing the Bison to punt, Pisgah grabbed a 30-20 lead with 10:30 remaining when freshman Legion McCrary raced 58 yards for a touchdown and Barrett ran for the two-point conversion. McCrary added a 35-yard touchdown run two minutes later and Smith caught his second two-point conversion pass for a 38-20 Eagles’ lead. Following Levi Arnold’s interception, the Eagles capped the scoring with Parker Law’s 1-yard touchdown run with 1:52 remaining.

McCrary finished with 117 rushing yards on 13 carries for Pisgah while Law had 81 yards on 14 carries, Holcomb had 42 yards on six carries and Barrett had 35 yards on four carries. Holcomb finished 7-of-13 passing for 102 yards and two scores while Hendricks caught three passes for 48 yards and Luke Gilbert caught two passes for 36 yards.

“Hat’s off to (NSM), they shut us down in the first half. We shot ourselves in the foot some, but they stopped us. Our kids felt comfortable at halftime even though we were behind because they knew we’d signed up for a 48-minute game, not a 24-minute game,” Pruitt said. “The offensive line, we were able to run the ball in the second half. That was the difference. We put it on the offensive line’s shoulders. We challenged our offensive and defensive line and they played really well in the second half. Skill guys made plays, they do every week, but the offensive and defensive lines win you ball games. People don’t notice it sometimes.”