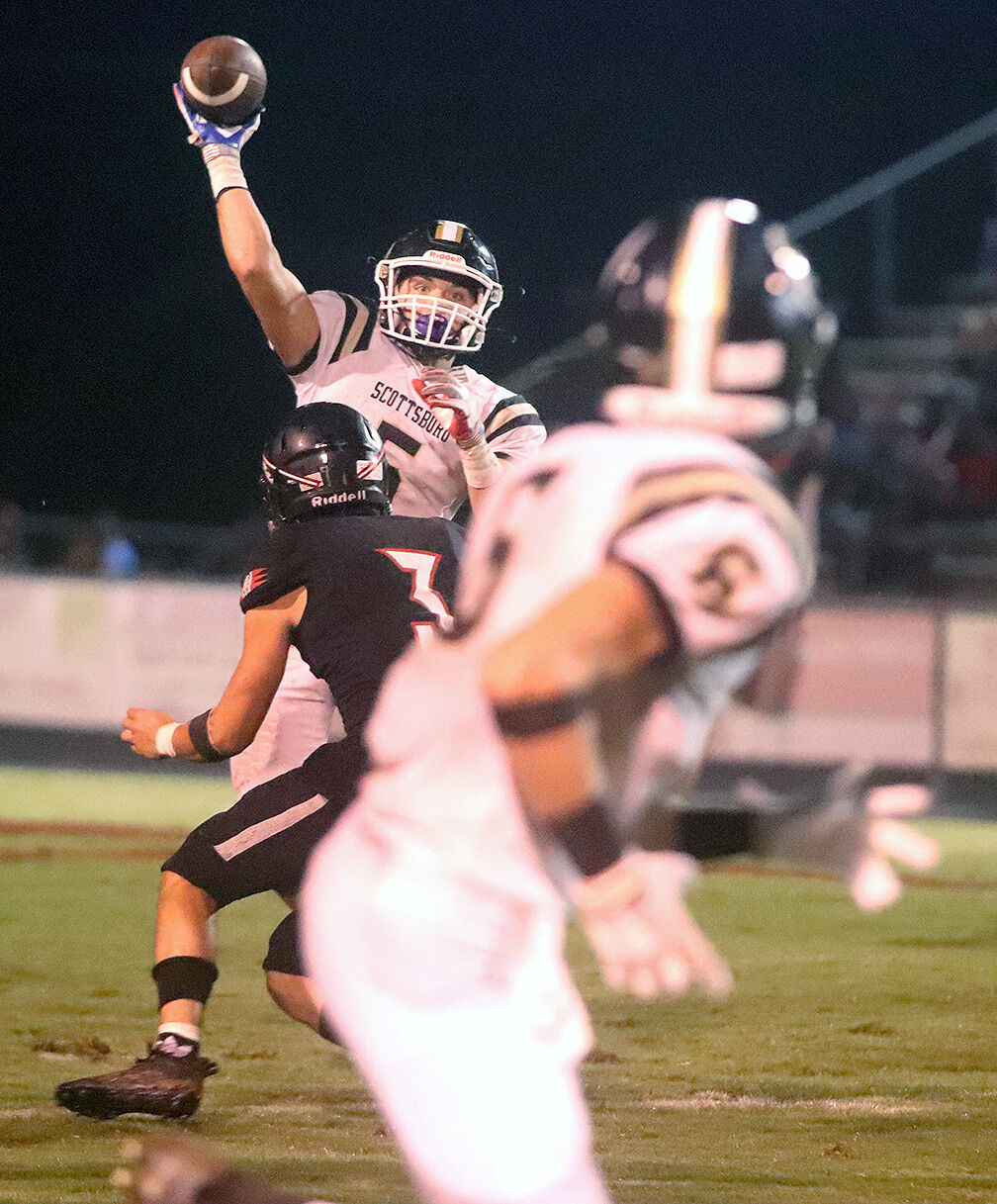 Gavin McCrary lets go of the football as he is hit by North Jackson's Cade Reed. McCrary's Pass found Kaylem Dupree (6) for a 32-yard touchdown on a halfback pass in Scottsboro's 22-6 win. 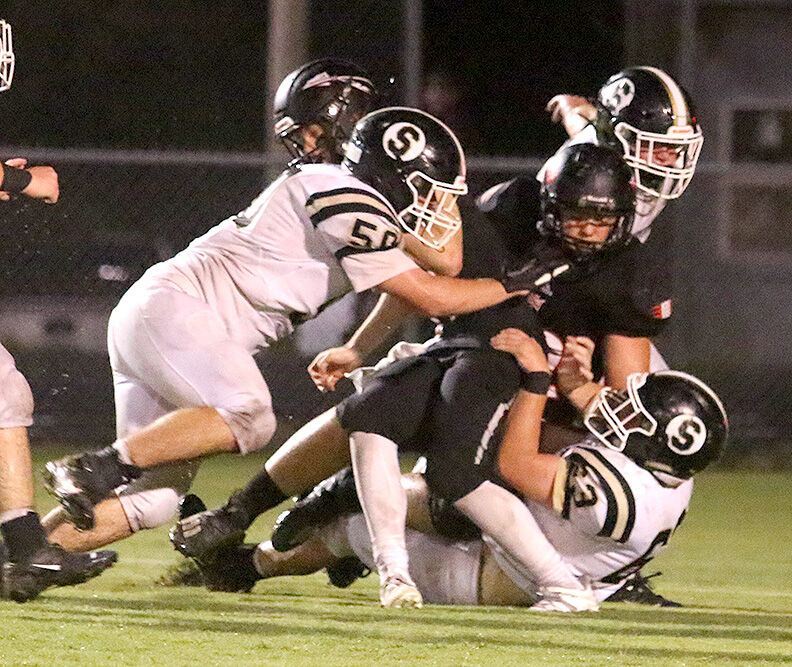 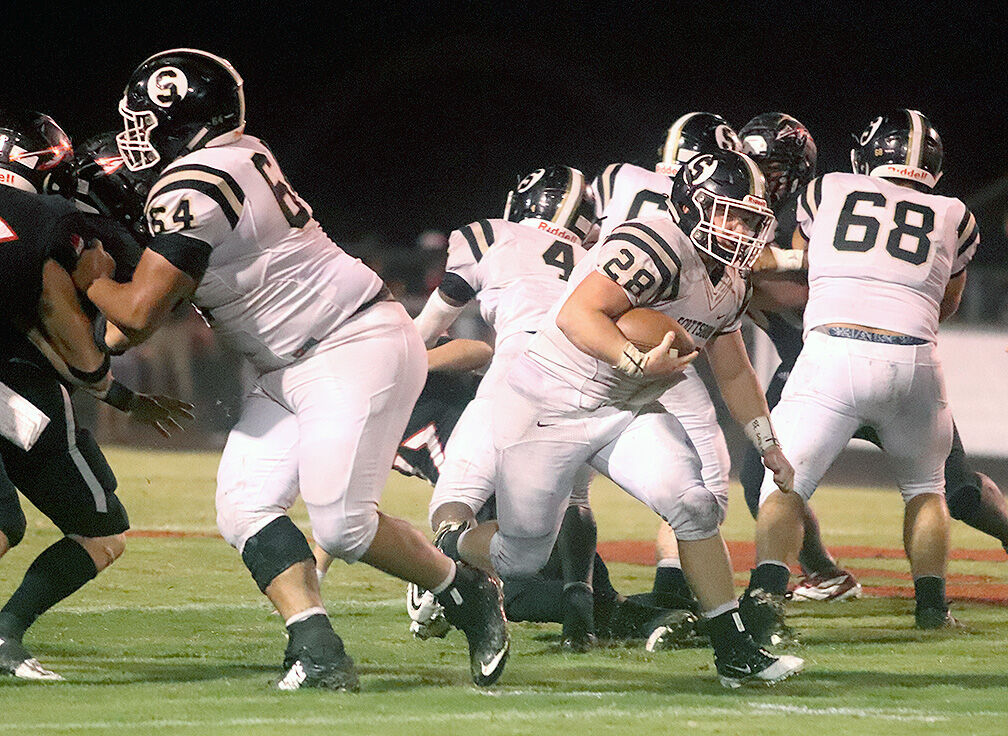 Jacob Manning (28) picks up yardage with blocking help from Camden Treece (64), JaVaris Branford (4) and Jonathan Wilkinson (68) during Scottsboro's 22-6 win over North Jackson Friday night in Stevenson. Scottsboro ran for 174 yards on the way to winning its second straight "Battle of the Valley" rivalry game with the Chiefs. 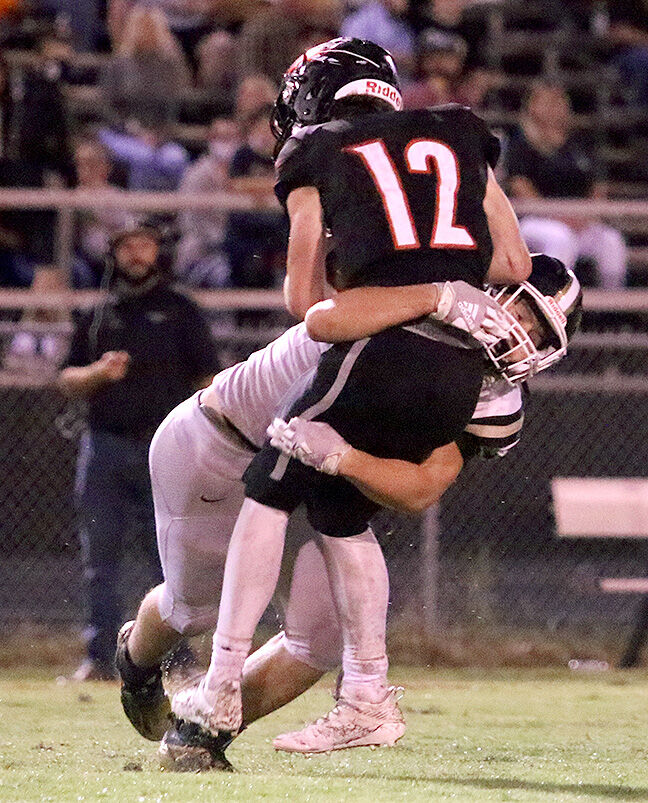 Gavin McCrary lets go of the football as he is hit by North Jackson's Cade Reed. McCrary's Pass found Kaylem Dupree (6) for a 32-yard touchdown on a halfback pass in Scottsboro's 22-6 win.

Jacob Manning (28) picks up yardage with blocking help from Camden Treece (64), JaVaris Branford (4) and Jonathan Wilkinson (68) during Scottsboro's 22-6 win over North Jackson Friday night in Stevenson. Scottsboro ran for 174 yards on the way to winning its second straight "Battle of the Valley" rivalry game with the Chiefs.

Scottsboro head football coach Don Jacobs has been in coaching for four decades.

Friday night was a reminder of one of the reasons he got into the profession.

Jacob’s Scottsboro team ground out a 22-6 win over archrival North Jackson Friday night at R.D. Hicks Stadium in Stevenson in the 33rd playing of the Battle of the Valley.

It was Scottsboro’s second straight win over the Chiefs, its fourth in five years in the series and its second ever road victory at North Jackson.

“That’s why I got into coaching, for games like this, the competition, the ramifications after this right here,” Jacobs said. “Our kids, they were locked in and focused. Defense did a great job, offense did a great job. We had a good plan and the kids executed it. That was the big thing. It was a great victory for the Wildcats football team.”

Scottsboro (2-3) won the game by making it be played at its style. The Wildcats held the football for nearly double the time as North Jackson — Scottsboro had a 32:11 to 15:49 time of possession advantage — while running for 174 yards on 49 carries.

Everybody did what they were supposed to do,” Jacobs said. “Offensively I thought we did a good job. We hung on to the ball. Defense played extremely well. Awfully proud of the offense. Special teams, we got all of their onside kicks. We made extra points and we blocked theirs.”

North Jackson (3-2), which turned the ball over on downs inside the Scottsboro 20-yard line on its previous two possessions, found the end zone on its third possession. Kyle Posey caught a 17-yard touchdown pass from Dalton Morris with 2:07 left in the second quarter, sending the game to halftime tied at 6-all.

Scottsboro went back in front early in the third quarter on a trick play. On fourth down and five, Gavin McCrary took the handoff while running to his right. He stopped and lofted a pass to a wide-open Kaylem Dupree, who raced into the end zone. The first of Alex Joose’s two PATs gave Scottsboro a 13-6 lead.

The halfback pass, coming out of halftime, was awesome,” Jacobs said. “It was beautiful. It was set up, everything perfect. Gavin did a great job. Dupree did a great job selling it, catching the ball and running. It was exciting to get that score coming out of the half.”

The Wildcats went up 20-6 in the fourth quarter when Manning capped a 15-play, 10-plus minute drive with a 7-yard touchdown run.

Manning finished with 94 rushing yards on 28 carries while Branford ran for 69 yards on 17 carries.

Scottsboro’s lead grew to 22-6 with 54 seconds left when Butler Barclay, with help from Cade Holder and Sam Dukes, sacked Morris in the end zone for a safety with 54 seconds remaining.

The Chiefs were held to a season-low 262 total yards.

“We had three drives (in the first half), and we only executed on one. We drove the ball down the field, but we’d stall in the red zone. Stuff gets tighter and you can’t throw down here because of the weather and the field,” said North Jackson head coach Chandler Tygard. “They did a better job than us, they coached better than us. I gotta get better and we gotta get better. We gotta coach better and we gotta do a better job all around. It’s disappointing.”

› Greg Bell of WWIC RADIO 1050 AM and Sentinel correspondent Brad Nevels contributed to this report.