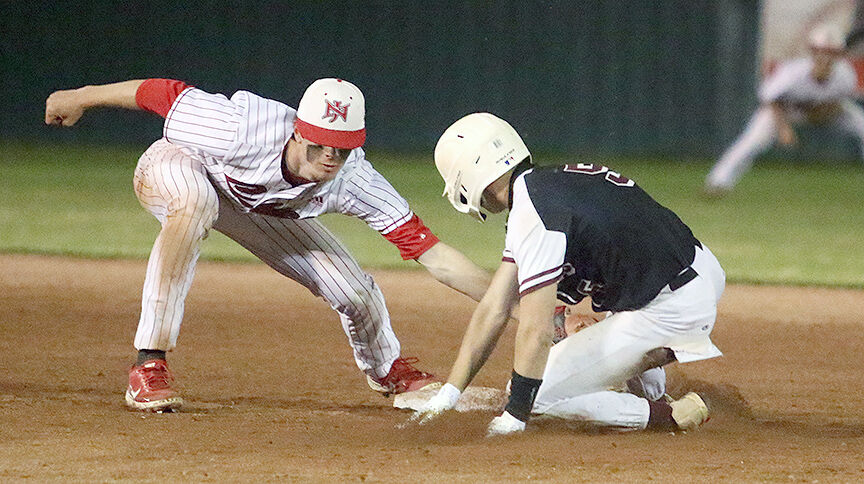 Dalton Morris tags out Hamilton's Ethan Davis for the final out in North Jackson's series- clinching 8-3 Game 2 win in the teams' Class 4A state quarterfinal series at Stevenson Park. 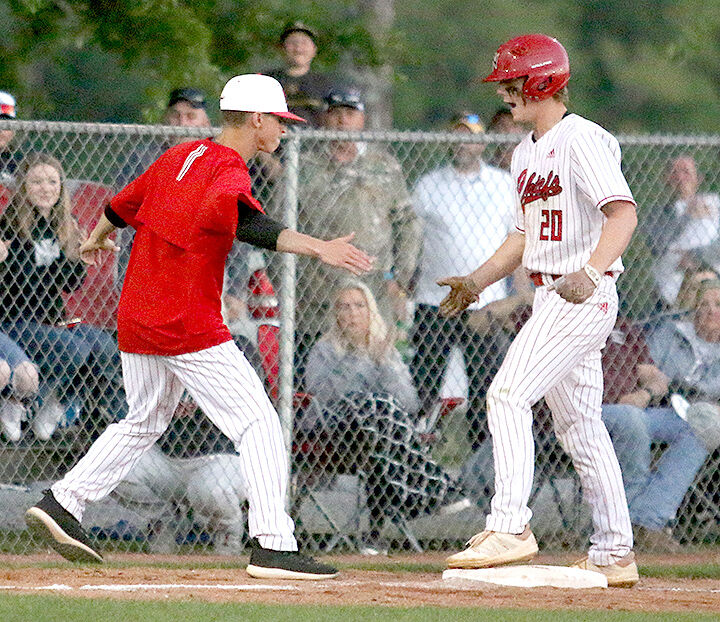 Brandon Poole (right) is congratulated by North Jackson third-base coach Rahley Hessey after driving in a pair of runs during North Jackson's Game 2 win over Hamilton. 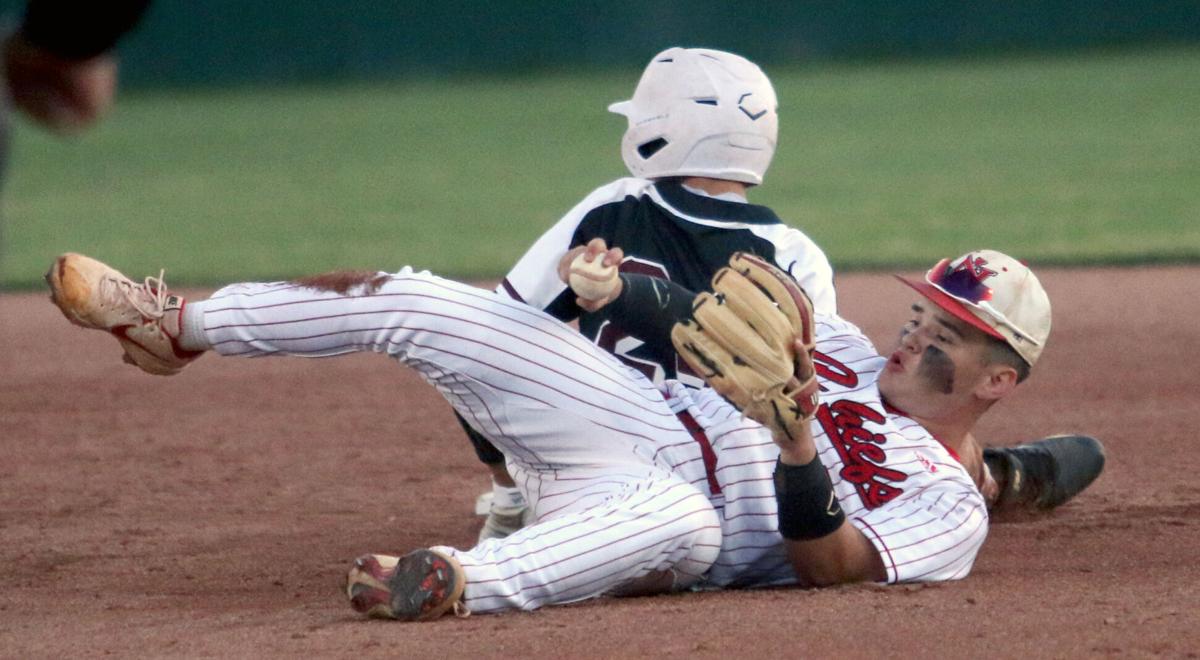 North Jackson's Carson Smith shows the umpire the baseball after falling over a Hamilton baserunner after tagging him out during Game 2 of the teams' Class 4A state quarterfinal series Friday night at Stevenson Park.

Dalton Morris tags out Hamilton's Ethan Davis for the final out in North Jackson's series- clinching 8-3 Game 2 win in the teams' Class 4A state quarterfinal series at Stevenson Park.

Brandon Poole (right) is congratulated by North Jackson third-base coach Rahley Hessey after driving in a pair of runs during North Jackson's Game 2 win over Hamilton.

North Jackson's Carson Smith shows the umpire the baseball after falling over a Hamilton baserunner after tagging him out during Game 2 of the teams' Class 4A state quarterfinal series Friday night at Stevenson Park.

The North Jackson baseball team is two wins away from playing for a state championship.

The No. 5-ranked Chiefs swept a Class 4A state quarterfinal series with visiting Hamilton Friday night at Stevenson Park, taking a Game 1 thriller 2-1 before completing the sweep with an 8-3 Game 2 victory to advance to the state semifinals for the second time in program history.

“This is why I came here three years ago, because I knew this team, this group, had the makings of being something special,” said North Jackson head coach Cole Porter. “All they’ve (accomplished) is well deserved. These guys have absolutely worked their tails off. The guys are all pulling in the same direction. I couldn’t be prouder of a group.”

A series win would send the Chiefs to the state finals for the first time. The North Jackson-Oneonta semifinal series winner plays the winner of the series between top-ranked Mobile Christian and No. 3 American Christian in the state finals series in Montgomery on May 17-18.

North Jackson’s only other state semifinal appearance came in 2016, when the Chiefs lost to Oneonta in three games.

Game 1 of the North Jackson- Hamilton quarterfinal series was a pitching duel between Chiefs freshman Carson Smith and Hamilton left-hander Eli Jackson, who had not allowed a run entering the matchup.

They got that lefty, and he’s a real dude,” Porter said, “but Carson threw great, probably the best game of his career. He had one inning where (Hamilton) tied it up, but we came right back and took the lead back.”

North Jackson took a 1-0 lead in the bottom of the second when Landon Barnes started the inning with a single and eventually reached third base before scoring a on a balk by Jackson.

Hamilton tied the game 1-all in the top of the sixth Brodie Moody doubled and later scored on Jackson’s RBI sacrifice fly, but North Jackson regained the lead in the bottom of the inning when Macklin Guess tripled and then scored on Smith’s RBI single.

Hamilton then loaded the bases with one out in the top of the seventh when Smith fielded a grounder and started a game-ending 1-6-3 double play to five the Chiefs the victory.

“Crazy ending,” Porter said. “Ground ball to the pitcher, and he goes to second (base) and we’re sitting here yelling ‘four’ (home plate). But it was perfectly executed. It was probably one of the greatest game-ending plays I’ve ever been a part of.”

In Game 2, North Jackson built a 8-1 lead after trailing 1-0 at the end of two innings. The Chiefs, who were the visiting team for Game 2, took a 2-1 lead in the top of the third on when Smith singled and scored on Poole’s RBI double and Poole’s courtesy runner Jonathan Linderman scored on Barnes’ RBI single. North Jackson scored four more runs in the fourth on Jernigan’s RBI double, Smith’s RBI single and Poole’s two-run double before adding two more in the fifth on Jernigan’s two-run double.

Poole got the win on the mound, as the senior held Hamilton to three runs (none earned) on two hits and three walks while recording eight strikeouts over 5 2/3 innings. Barnes pitched the final 1 1/3 innings, allowing one hit and posting two strikeouts.

“Game 2s, we’ve been kind of feeling the other team out, and then when (the opponent) does something, then we do,” Porter said. “(Second-round opponent) Cherokee County scored five runs on and we score five right back. (Hamilton) scored one and we came back with a two-spot. Once we got the lead, we just kept plugging away. Poole threw a great game. He’s thrown better each week of the playoffs.”

North Jackson, which has won 11 straight games, finished undefeated (1_-0) at home this season.

The Chiefs’ semifinal series will be a rematch of a game played earlier this season when Oneonta topped visiting North Jackson 7-2 on March 6.

“(Oneonta) is talented. Got some seniors that are really good. There No. 1 and No. 2 pitchers are hurt, out for the year. But their No. 3 is their No. 1 now and he’s a dude, (throws mid-80s). He beat us down there (in March),” Porter said. “That’s who I wanted (to play). That could be a curse because they’re really good, but I wanted to matchup with them. We got beat by them (in March), but we were a play away from getting out it at 2-1, didn’t make it and it ended up a 7-2 game. We’ve gotten so much better since then. We’re excited. It’s going to be a great series.”