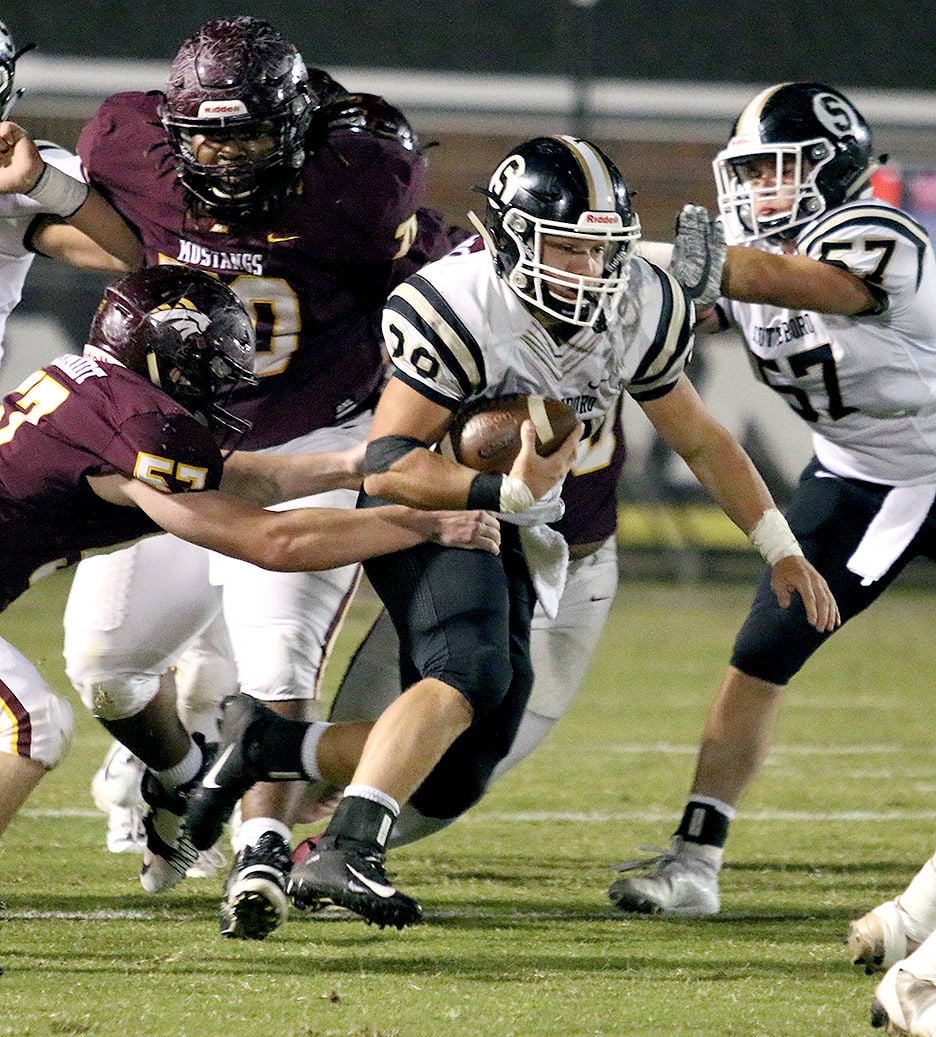 Jacob Manning runs through the Madison Academy defense for a big gain in Scottsboro's 21-12 win Friday. 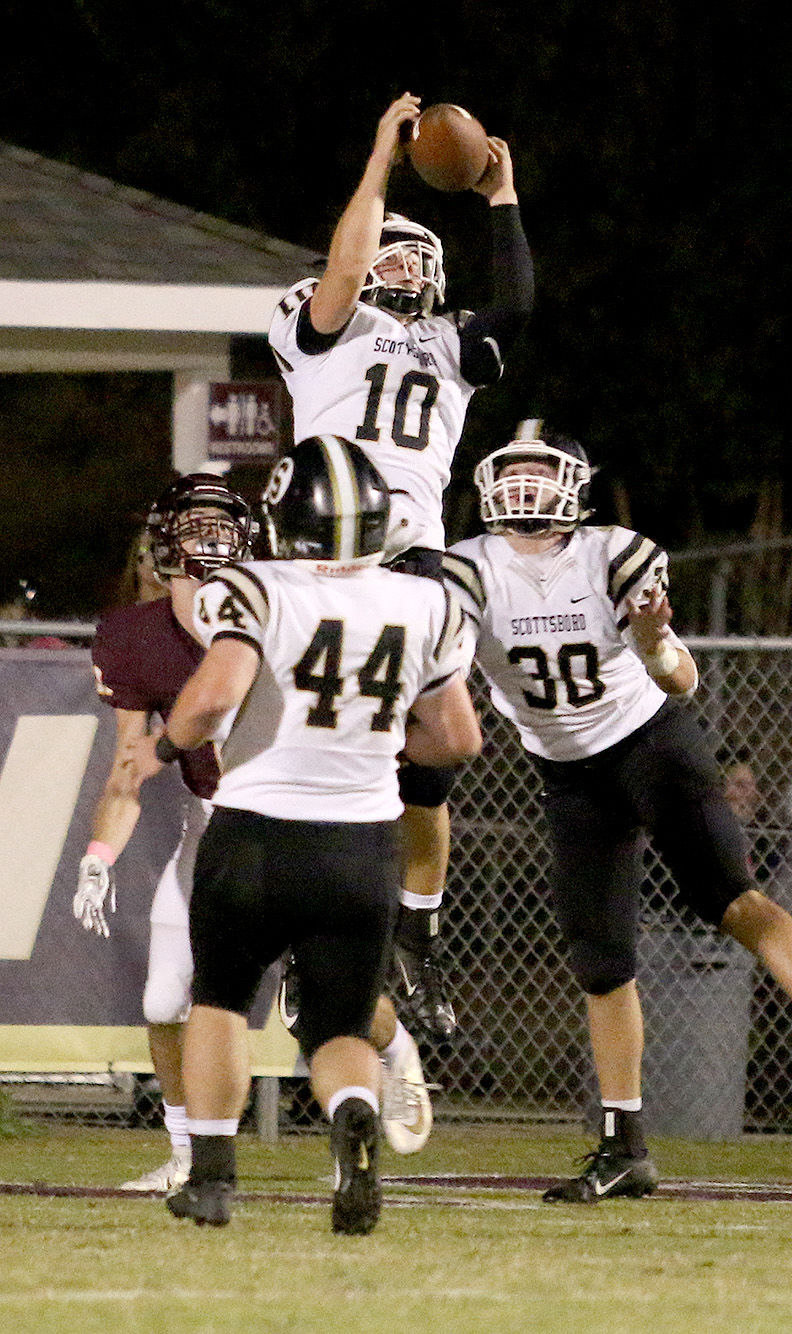 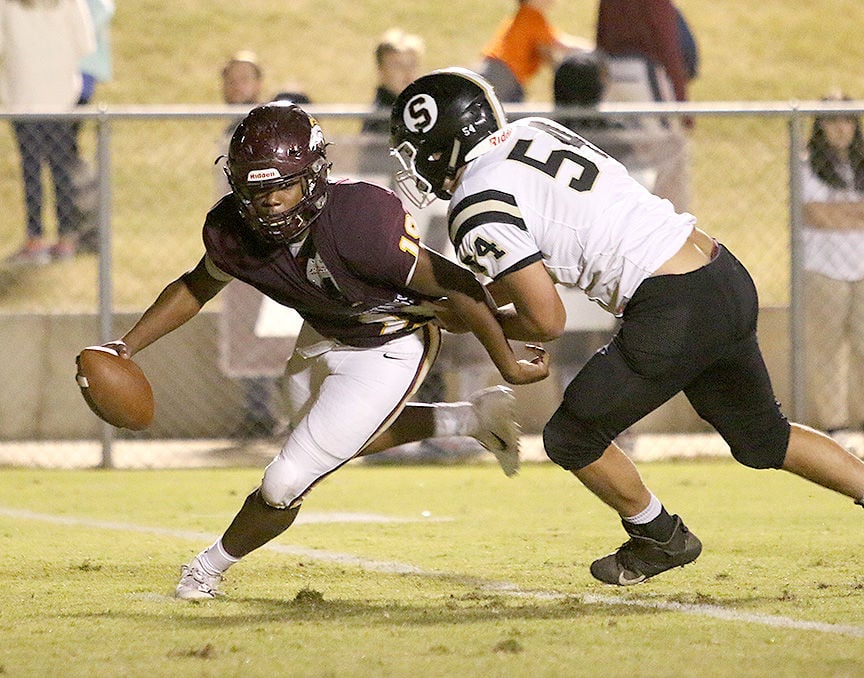 Jacob Manning runs through the Madison Academy defense for a big gain in Scottsboro's 21-12 win Friday.

MADISON — The Scottsboro football team took a big step toward starting the postseason on their home field.

The Wildcats muscled their way to a critical 21-12 Class 5A Region 8 victory over host Madison Academy Friday night at Bill Washington Stadium in Madison.

The win in all likelihood means Scottsboro (6-2, 5-1) will host a Class 5A first-round playoff game as the Region 8 No. 2-seed. A Scottsboro win over Brewer next week and a Madison County (7-2, 5-1) loss to last-place Ardmore would make the Wildcats the region champion. The longshot scenario is a four-way tie for first place, but even then Scottsboro would likely still be the No. 2 seed.

“If we go take care of Brewer next week,” he said, “we’ll be playing at the house (in the first round).”

The Wildcats held Madison Academy (5-3, 4-2) to its second lowest point total and kept the Mustangs out of the end zone for the final two-plus quarters. The Wildcats pressured Madison Academy quarterback Avery Seaton all game long and intercepted him twice. Noah Linville and A.J. Widgeon came up with the interceptions, with Widgeon’s stopping a potential go-ahead scoring drive late in the third quarter.

Meanwhile, the Scottsboro offense produced as usual in the rushing game, gaining 325 yards on 64 carries. Quarterback Jacob Manning and running back Cam Bass both surpassed the 1,000-yard rushing mark for the season during the game. Manning ran for 234 yards on 39 carries while Bass had 76 rushing yards on 22 carries.

Madison Academy went back on front early in the second quarter on Seaton’s 5-yard touchdown run, but the Mustangs failed on the two-point conversion pass, leaving them with a 12-7 lead they ultimately carried into halftime.

Scottsboro regained the lead on its first possession of the second half. The big play of the drive was a 16-yard pass from Manning — his only attempt of the game — to Rylee Whitehead to the Madison Academy 3-yard line. Bass scored on the next play to push the Wildcats in front 14-12.

Scottsboro moved in front 21-12 on Manning’s 6-yard touchdown run with 9:44 left in the fourth quarter. After forcing a Mustangs punt, Scottsboro ran nearly six minutes off the clock to effectively end the game.

“It’s pretty special,” Jacobs said of the win. “What we’ve overcome to give ourselves an opportunity, and that’s all we’ve got, is an opportunity. We took advantage of the opportunity tonight coming over here and beating these Mustangs. They’re a very good team. Our kids played their hearts out. Hopefully (it’s a sign) of things to come.”

“I’m awfully proud of them. I’m more proud of what they’ve overcome and what they’ve learned through the process of this great game of football, which is you’ve got to go to work every day. Besides (the) Arab (game week), this was probably our best week of practice, most focused, everybody locked in. That was our plan going in (to be more physical than Madison Academy). The scoreboard tells the story.”