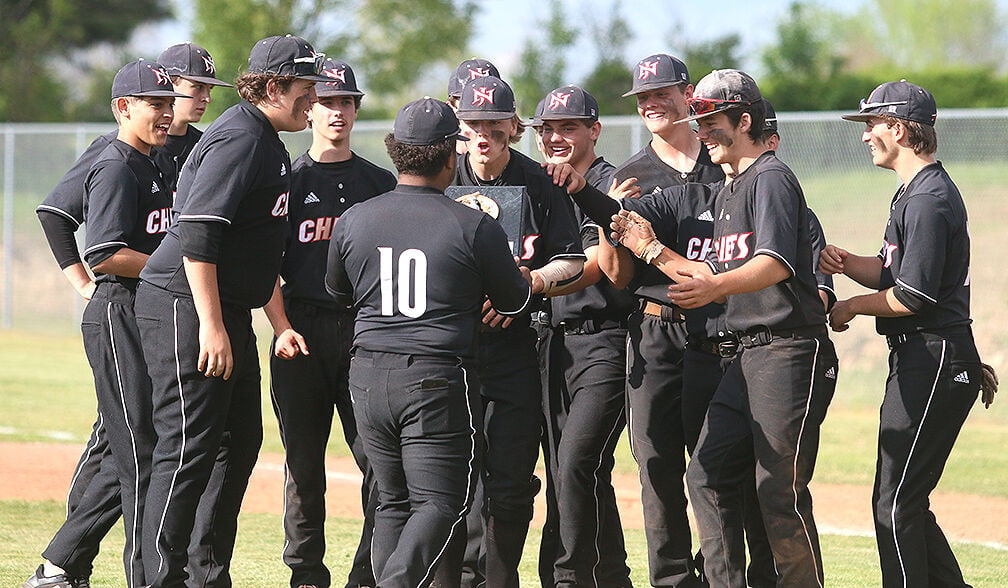 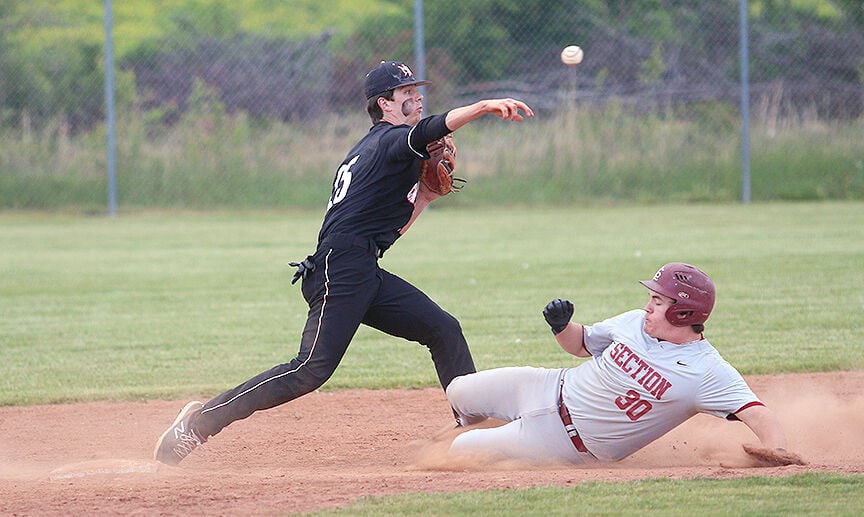 Dalton Morris throws to first base to try to turn a double play after getting the force out on Section's Jed Sparks during North Jackson's 7-3 win in the 2021 Jackson County Tournament championship game. 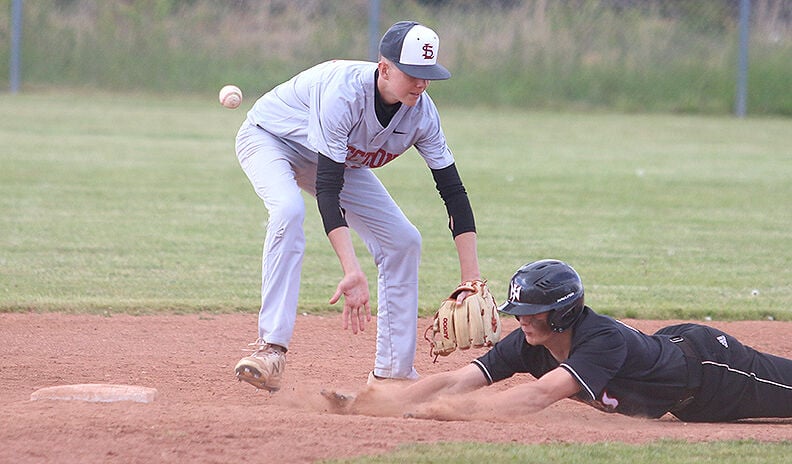 Landon Barnes slides in safely at second base after the baseball, intended for Section's Keaton Morris, bounces off of Barnes during the Jackson County Tournament finals. 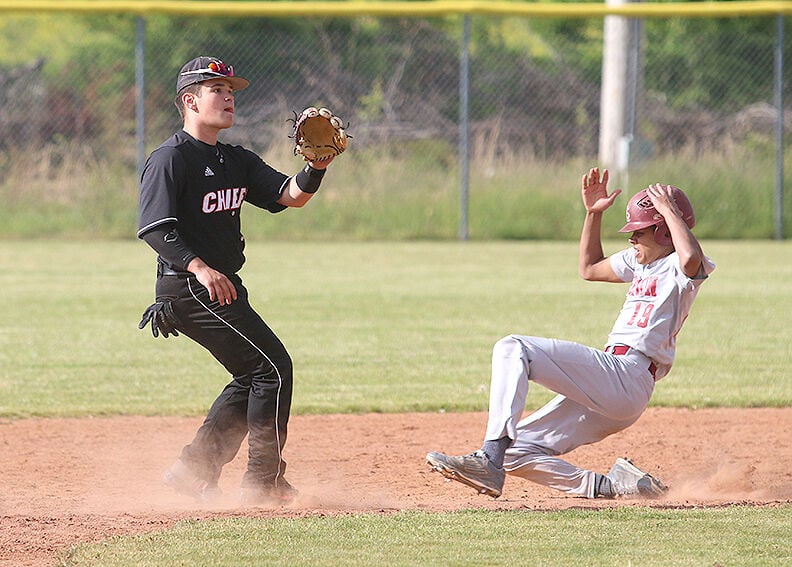 Dalton Morris throws to first base to try to turn a double play after getting the force out on Section's Jed Sparks during North Jackson's 7-3 win in the 2021 Jackson County Tournament championship game.

Landon Barnes slides in safely at second base after the baseball, intended for Section's Keaton Morris, bounces off of Barnes during the Jackson County Tournament finals.

The North Jackson baseball program will wear the Jackson County baseball championship crown for at least another year.

The Class 4A No. 5-ranked Chiefs claimed their fourth straight county title with a 7-3 win over Section Saturday afternoon at North Sand Mountain High School in Higdon.

North Jackson (24-8) has won six of the last seven Jackson County baseball tournament championships and have won 10 county championships since the county tournament restarted in 2002 after long hiatus.

It’s tough to four-peat. These seniors will graduate having won the county championship every year, so that’s special,” said North Jackson head coach Cole Porter. “We didn’t play the way we wanted to, but we got the win. We had some timely hits, stole some bases, which was good. We did enough. Sometimes you have to win when you don’t play like your best or (play) like you want to.”

North Jackson, which defeated NSM 15-5 in the semifinals earlier on Saturday, opened up a 3-0 first inning lead in the title game against Section (5-16) and led 5-0 after three innings. Section got two runs in the fourth, but the Chiefs countered with two in the bottom of the fourth to lead 7-2. Section capped the scoring in the fifth when Drake McCutchen doubled and eventually scored on a passed ball.

Dalton Morris and Brandon Poole had two hits each for North Jackson while Carson Smith had an RBI double and two walks and Macklin Guess had one hit and one RBI. Brandon Poole got the win on the mound for the Chiefs, working four innings and striking out four while allowing two runs (one earned) on three hits and three walks. Landon Barnes picked a up three-inning save. He allowed one unearned run while recording one strikeout.

McCutchen took the loss for Section, but the junior only surrendered one earned run on seven hits and two walks while recording one strikeout.

“(McCutchen) only gave up three earned runs. He pitched really well — with a hurt hand, too — and gave us a chance,” said Section coach Luke Pope. North Jackson, that’s a really good team. We played pretty well but can’t make errors against a team like that. Got to play your best ball. We made errors or we could’ve been there at the end.”

Section loses just one senior, Cole Woods, and Pope said the Lions’ run to the county finals was “something to build on” for next season.

“We’ve got a lot of seniors coming up next year, and a lot of kids that hadn’t played in a while that we’re getting back in the routine of playing,” Pope said. “From the first game to now, we’ve come a long way this year.”

North Jackson 15, NSM 5 — The Chiefs led 4-3 after three innings before breaking the game open with an eight-run fourth on the way to defeating the 2A No. 7-ranked Bison on Saturday and advancing the finals.

Smith pitched four innings and recorded three strikeouts to earn the win on the mound for the Chiefs.

Section 14, Woodville 3 — The Lions scored six runs each in the first and second innings on the way to advancing to the county finals for the first time since 2018.

Dominik Blair pitched four innings in relief and got the win on the mound. He recorded two strikeouts while allowing just four hits and no walks.

Jackson Peek finished 3-for-3 with a double and an RBI for Woodville (1-14) while Ben Minor and Aadeance Weaver had one hit each.

Section 17, Pisgah 12 — Section rallied from a six-run deficit to defeat Pisgah Friday night and advance to the semifinal round.

Drake McCutchen finished 2-for-3 with two RBIs and two runs scored and Dominik Blair was 2-for-4 with an RBI while Braden Arndt and Jacob Stringer had one hit and two RBIs each had Dillan Pope, Jacob Cooper and Jed Sparks had one hit and one RBI each. Jacob Cooper got the win on the mound after pitching the final 5 2/3 innings in relief. He recorded 11 strikeouts.

NSM 13, Skyline 3 — The Bison scored eight runs in the bottom of the first inning before taking on three more in the second and fourth innings to earn the win in the five innings Friday afternoon and advance to the semifinals.

Lake Bell recorded six strikeouts while pitching three perfect innings to earn the win on the mound for NSM. Harley Tucker pitched the final two innings for the Bison and posted two strikeouts.