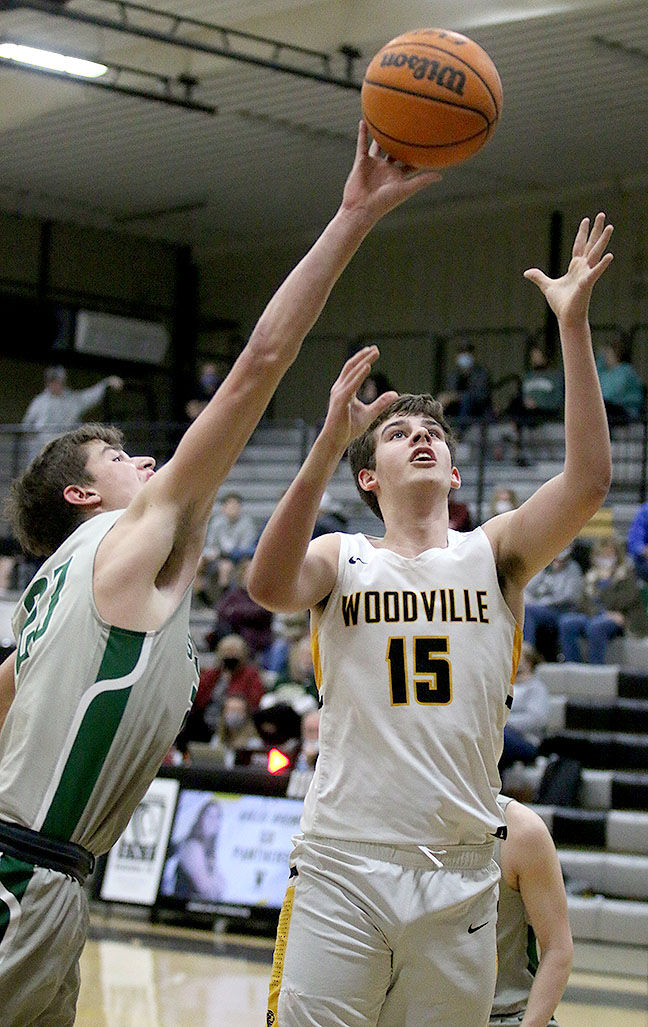 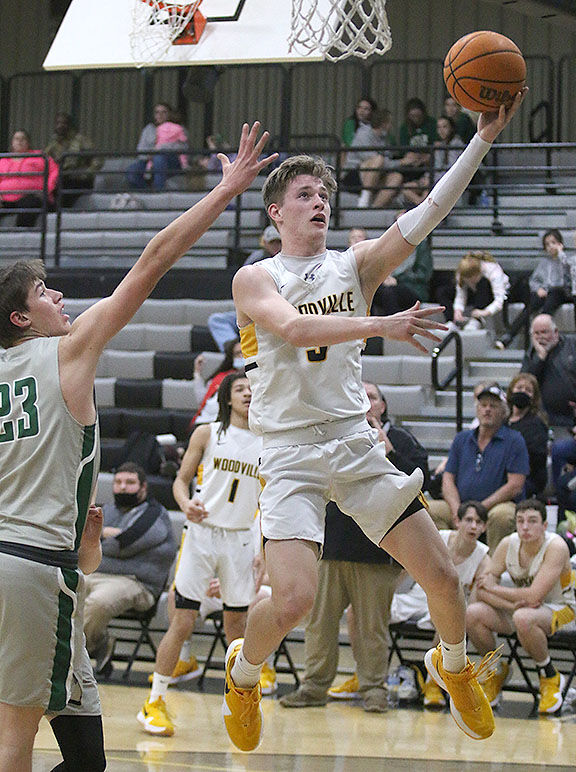 Jackson Peek (5) goes in for a layup during Woodville’s Class 1A Area 13 contest with rival Skyline.

Jaylon Clements (22) shoots a floater along the baseline during Skyline’s 65-59 win at Woodville.

Jackson Peek (5) goes in for a layup during Woodville’s Class 1A Area 13 contest with rival Skyline.

Jaylon Clements (22) shoots a floater along the baseline during Skyline’s 65-59 win at Woodville.

It was a case of mission accomplished for the Skyline varsity boys basketball team.

No. 1-ranked Skyline overcame a determined Woodville team for a 65-59 Class 1A Area 13 victory Friday night.

"I told the kids if we'd won the game by six points or by 36 points, the same thing was accomplished," Perry said. "I felt like we were on fumes at the end, our fourth game in five days. I thought the kids played hard. Woodville made some plays. We got up 15 (in the third quarter) so give (Woodville) credit for battling back and us some credit for holding on and winning."

Woodville (8-5, 5-2) lost to the Vikings 75-41 three days earlier at Skyline, but the Panthers had a much different showing in the rematch. Each time Skyline tried to pull away, Woodville came charging back.

"I thought we competed with them. We didn't compete at Skyline. We laid down. But we competed this time," said Woodville head coach Bubba Smith. "We had a lot of guys step up and help us. Playing them close, maybe that helps us if we see them again. Just have to keep working."

Skyline built a 15-8 lead after one quarter and moved in front 28-14 on Clements' bucket with 4:42 left in the first half. But Woodville closed the first half on an 11-5 scoring run to cut Skyline's back to 33-25 at halftime. The Panthers got within five early in the third quarter, but the Vikings went on a 13-2 run over the next five-plus minutes to build a 15-point lead. Skyline led 50-35 after two Avans free throws with 50.4 seconds left in the third quarter, but Zach Robertson and Peek sank 3-pointers in the closing seconds of the period to pull Woodville within 50-41 entering the fourth quarter. Peek then hit another trey to open the fourth, and Dolberry then scored inside for Woodville to cut Skyline's lead to 50-46. Woodville got as close as three twice during the fourth quarter, but Burton's steal and layup gave the Vikings a 61-56 lead with 1:19 remaining, and they made enough free throws the rest of the way to hold on.