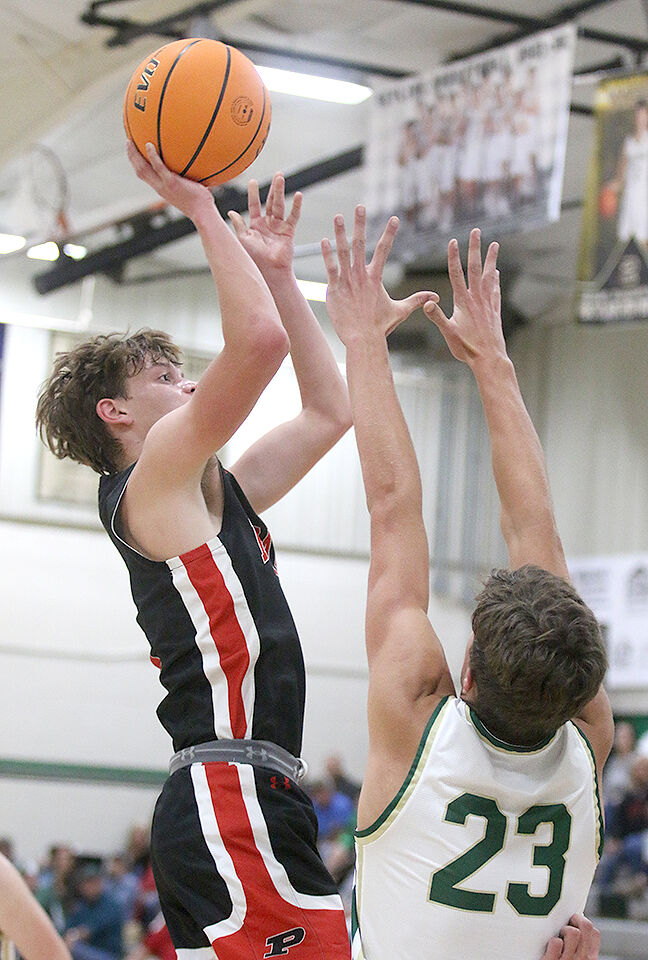 Jake Hendricks shoots over Skyline's Weston Avans for two of his 21 points in Pisgah's 73-69 win. 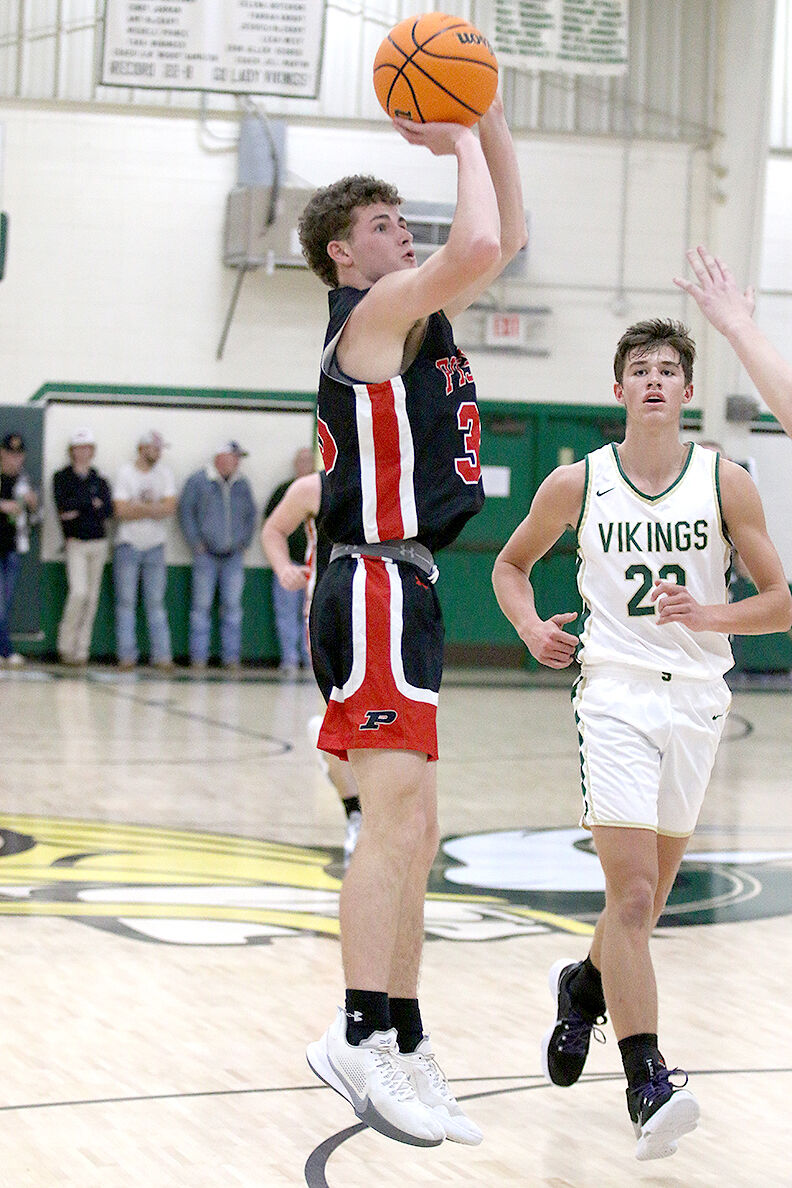 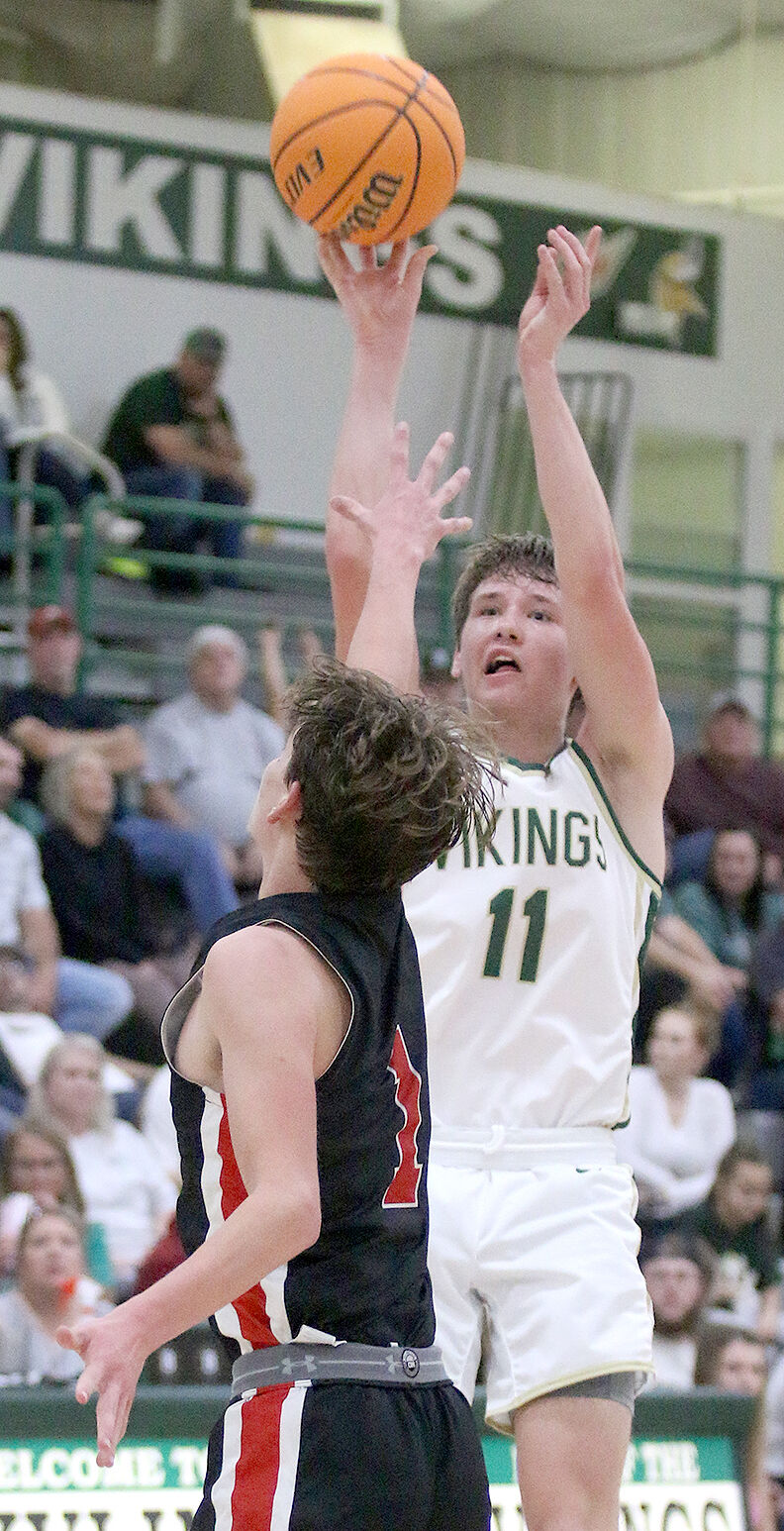 Pisgah's Legion McCrary sinks a jumper over the outstretched hand of Skyline's Will Avans.

The Pisgah varsity boys basketball team rallied for a win over a Jackson County rival during its first road game of the 2021-22 season.

The visiting Eagles overcame a 13-point deficit after one quarter and made two big defensive plays in the closing seconds to secure a 73-69 win at Skyline Thursday night.

Pisgah (2-1) trailed 22-9 after one quarter before rallying for its second straight victory.

“It was a big win,” said Pisgah coach Lamar Hendricks. “Coming to Skyline is never easy, really good (Skyline) team and a tough place to win. We had some pregame jitters, came out flat. Seems like we pick a quarter and decide not to play and then we have to fight and scratch to get back in the game. But we settled down and kept fighting and scratching and made it work. We had some guys step up and the rest of them followed along.”

Logan Evans scored 23 points and Weston Avans netted 17 for Skyline (1-2) while Chase Bickers had 10, Bryant Kennamer had seven and Jayten Prince and Will Avans had six apiece.

Skyline closes the first quarter on a 15-3 scoring run, grabbing a 22-9 lead after one quarter on Kennamer’s transition layup.

But Pisgah opened the second quarter with a run of its own, outscoring the Vikings 16-3 over the first 2:50 to tie the game at 25-all. Skyline led 42-40 at halftime but Pisgah was in front 59-57 after three quarters.

Pisgah built a 67-60 lead with 3:27 remaining following Kirby’s 3-pointer, but Skyline got a trey frm Bickers and two free throws each from Evans, Will Avans and Kennamer to tie it at 69-all with 1:34 remaining.

Holcomb’s driving layup gave Pisgah a 71-69 lead with 1:18 remaining, and after the teams traded empty possessions, Kirby deflected and stole a Skyline post on the wing, leading to two McCrary free throws that gave Pisgah a 73-69 lead. Rhyan Barrett came up with a steal on the next Skyline possession to seal the win for Pisgah.