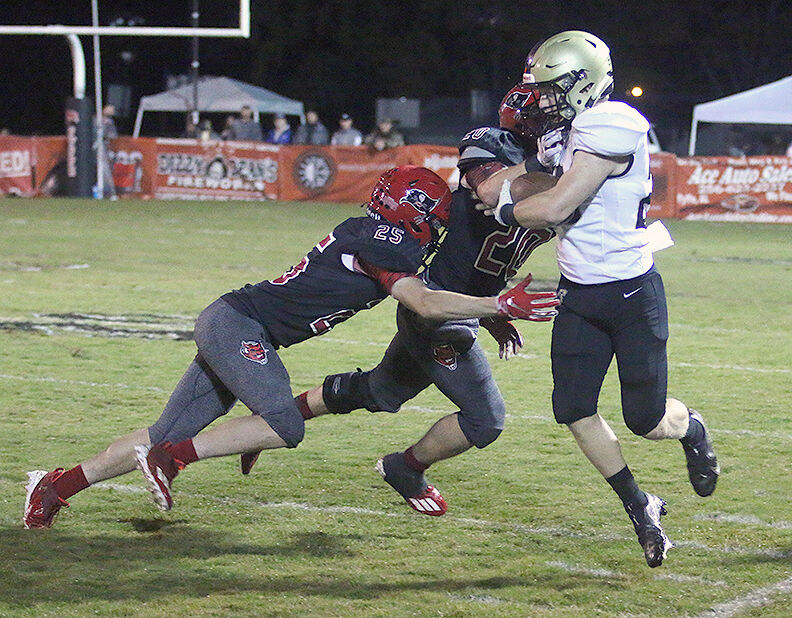 Caleb Lynch (right) is pushed out of bounds by Fyffe defenders during Scottsboro's 45-7 season-ending loss to the Red Devils Thursday night. 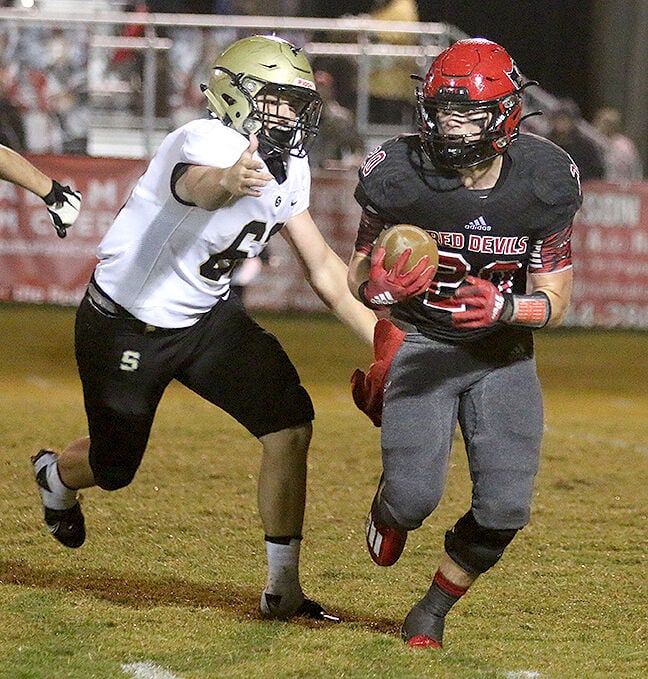 Scottsboro's Kyle Wright holds on to a catch despite a big hit from Fyffe's Logan Anderson.

Caleb Lynch (right) is pushed out of bounds by Fyffe defenders during Scottsboro's 45-7 season-ending loss to the Red Devils Thursday night.

Class 3A No. 3-ranked Fyffe used a stout defense and a big performance from freshman running back Logan Anderson to defeat visiting Scottsboro 45-7 Thursday night.

The win extended the Red Devils’ home winning streak to 53 consecutive victories. Fyffe (9-1) which won state championships in Class 2A from 2017-19 before winning the 3A state title in 2020, has not lost at home since Week 2 of the 2015 season.

Meanwhile, the loss ended Scottsboro’s season at 3-7. The Wildcats entered Thursday’s matchup after posting back-to-back wins over Southside and Pell City, but was unable to keep that momentum going in their season finale.

“We got whipped, they were stronger than us, no other way to put it. We hate to go out with a thud like that,” said first-year Scottsboro head coach Cris Bell.

Touchdown runs of 2 and 9 yards and a two-point conversion run by Anderson and a 3-yard touchdown run by Hicks gave Fyffe a 39-0 lead with 9:52 remaining in the game.

Scottsboro got on the board on Keelan Alvarez’s 12-yard touchdown run and Alvaro Cazorla’s PAT with 6:57 remaining, but Anderson returned the ensuing kickoff 88 yards for a score to give the Red Devils a 45-7 advantage.

Anderson finished with 141 yards and five total touchdowns for Fyffe while Kyle Dukes ran for 101 yards on 17 carries.

Thomas Rackler was Scottsboro’s leading rusher with 52 yards on four carries while Alvarez had 47 yards on 11 carries, Jake Jones had 26 yards on five carries and Caleb Lynch had 23 yards on three carries. Jones completed 8 of 15 passes for 58 yards, including three to Lynch for 16 yards and two each to Rackler and Reed Potter for 34 and 13 yards respectively.

Seniors Will Dukes and Cade Holder recorded 12 tackles each for Scottsboro while senior Barclay Butler had eight tackles and one quarterback sack and senior Sam Dukes had seven tackles.

Bell said the Wildcats’ offseason would be “huge.”

› Greg Bell of WWIC Radio 1050 AM contributed to this report.