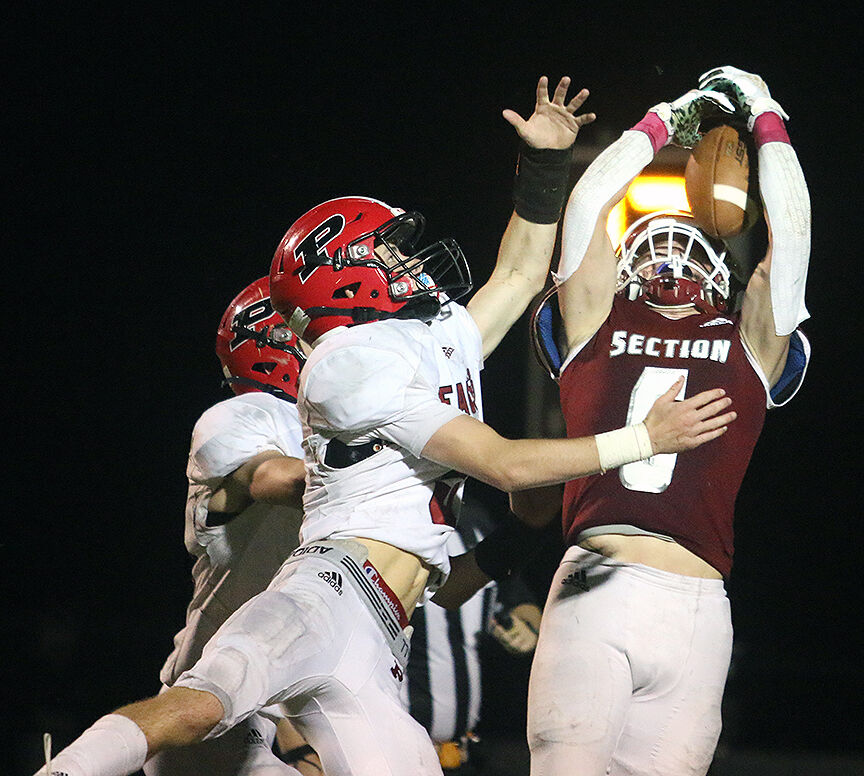 Jacob Kirby (left) breaks up a pass intended for Section’s Dominik Blair in the end zone during Pisgah’s 20-0 win that clinched the Eagles a home playoff in Class 2A. 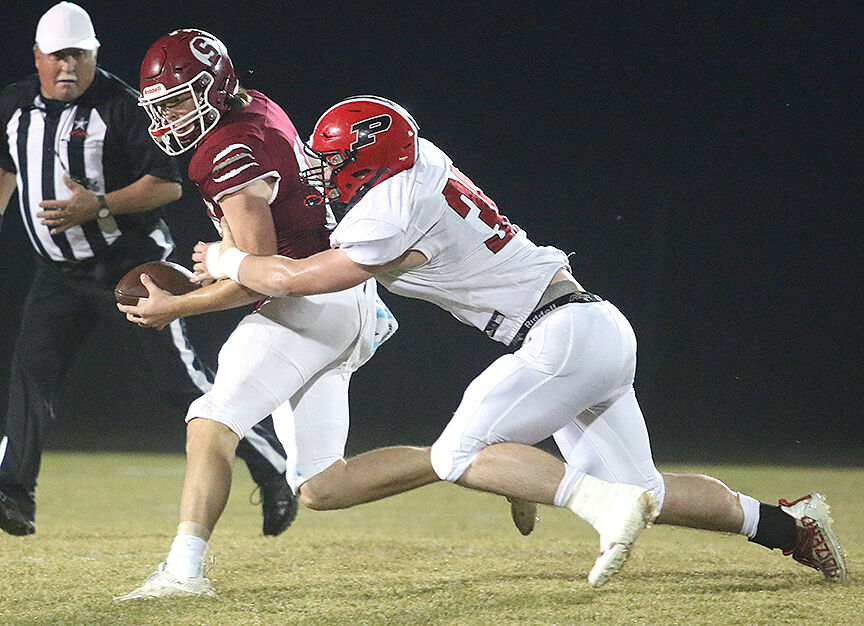 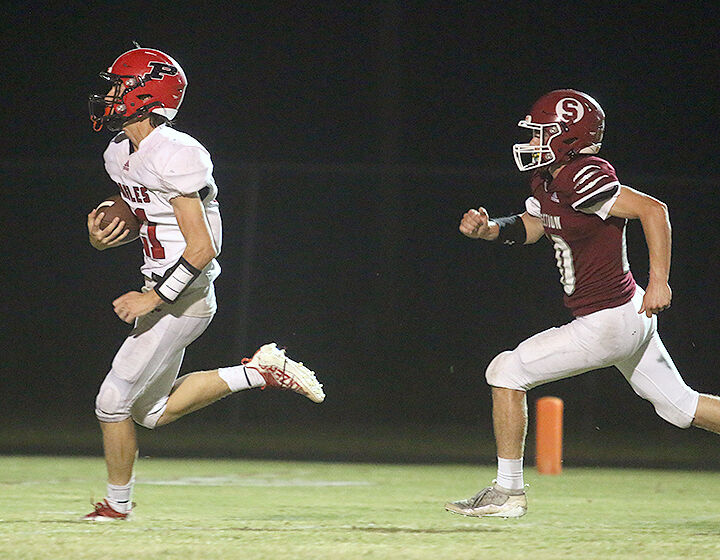 Grant Smith (left) runs into the end zone after catching a pass from Mason Holcomb late in the fourth quarter to seal Pisgah's 20-win over Section. 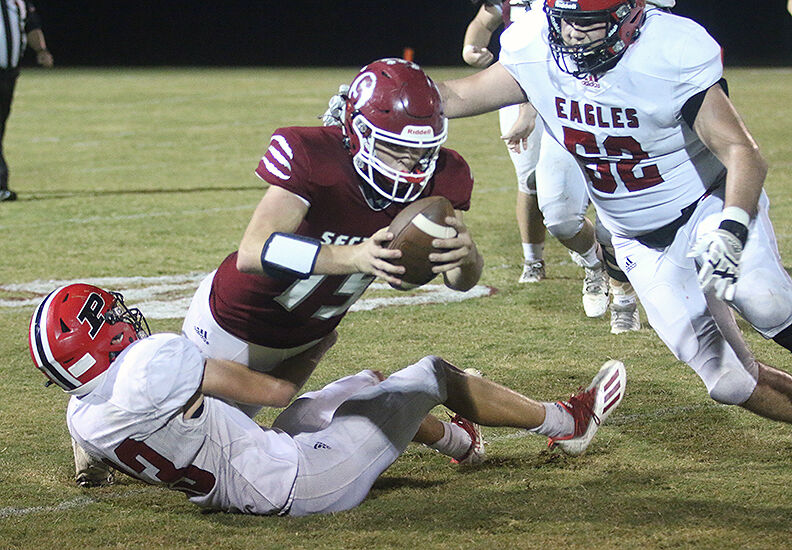 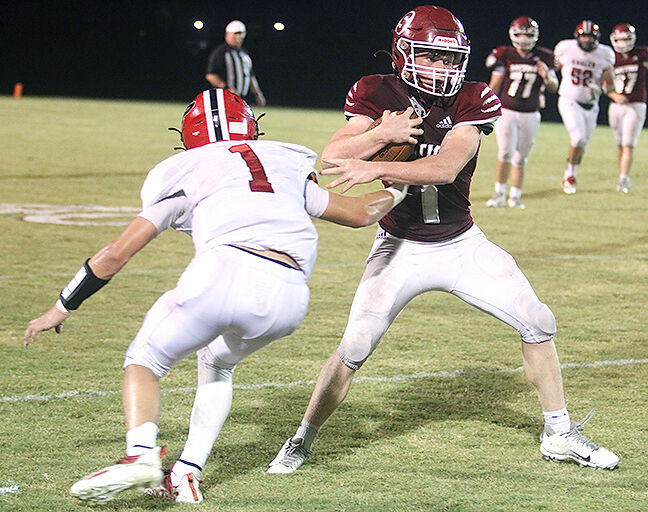 Jacob Kirby (left) breaks up a pass intended for Section’s Dominik Blair in the end zone during Pisgah’s 20-0 win that clinched the Eagles a home playoff in Class 2A.

Grant Smith (left) runs into the end zone after catching a pass from Mason Holcomb late in the fourth quarter to seal Pisgah's 20-win over Section.

Despite an 0-3 start to the season, the Pisgah football team didn’t lose focus on its goals.

And the Eagles reached two of them Friday night.

Pisgah clinched a playoff berth thanks to a 20-0 Class 2A Region 7 win over rival Section, then got word it would host a first-round playoff game on Nov. 5 thanks to Ider’s 14-0 win over Falkville.

“Proud of our kids, proud of coaches,” said Pisgah head coach Luke Pruitt. “From where we started to where we are, from the start we had to getting host and play for a region championship, hats off to our kids. This shows you what they’re made of. That’s why I love this community. It’s blue collar and we come to work every day. They could’ve folded the tent, but they didn’t, because that’s not how they’re raised. I’m proud of them.”

The loss ended the playoff hopes for Section (4-4, 2-4), which had a long touchdown on its first offensive play called back and then struggled to finish lengthy time-consuming drives the rest of the night.

“First play we take it (the distance), we get a flag, (and) that kills us momentum wise,” said Section head coach Chris Hammon. “Offensively, stalled out on some drives. Defensively I thought our kids played their guts out. They hit us on two pass plays and had a short field on another score. I’m proud of our guys. We just couldn’t get it in the end zone.”

Pisgah’s defense limited Section to 189 total yards, 147 of which was rushing. The Eagles have allowed just 12 points in their last 10 quarters.

Meanwhile, Section held Pisgah to its lowest point total of the season, and the Eagles managed just 195 total yards.

After Drake McCutchen’s 73-yard touchdown run for Section was negated by a holding penalty in the first quarter, the game stayed scoreless until Mason Holcomb hit Jacob Kirby for a 49-yard touchdown pass to give Pisgah a 6-0 lead with 10:08 left in the second quarter.

After Pisgah’s Jathan Mays made the first of his two fumble recoveries, the Eagles went in front 14-0 with 7:13 left in the half when Legion McCrary took a swing pass from Holcomb 22 yards for a touchdown and Holcomb found Jake Hendricks for a two-point conversion.

Section then had two drives reach the Pisgah 26-yard line, one late in the second quarter and one early in the fourth, but both ended on interceptions by Caiden Hawkins and Kirby.

Pisgah put the game away with 2:47 remaining when it slipped Grant Smith behind the defense for a 26-yard touchdown pass from Holcomb.

Holcomb finished 5-of-12 passing for 112 yards for the Eagles, with Kirby catching two passes for 50 yards while Smith (26 yards), McCrary (22 yards) and Hendricks (14 yards) had one reception each. McCrary led the Eagles in rushing with 62 yards on 14 carries.

McCutchen ran for 47 yards on 11 carries for Section before suffering a shoulder injury in the third quarter, and Jr. Walker added 38 yards on 11 carries while Cameron Summerford had 26 yards on seven carries. Jacob Cooper was 5-of-20 passing for 42 yards, with Dominik Blair catching each pass for the Lions.