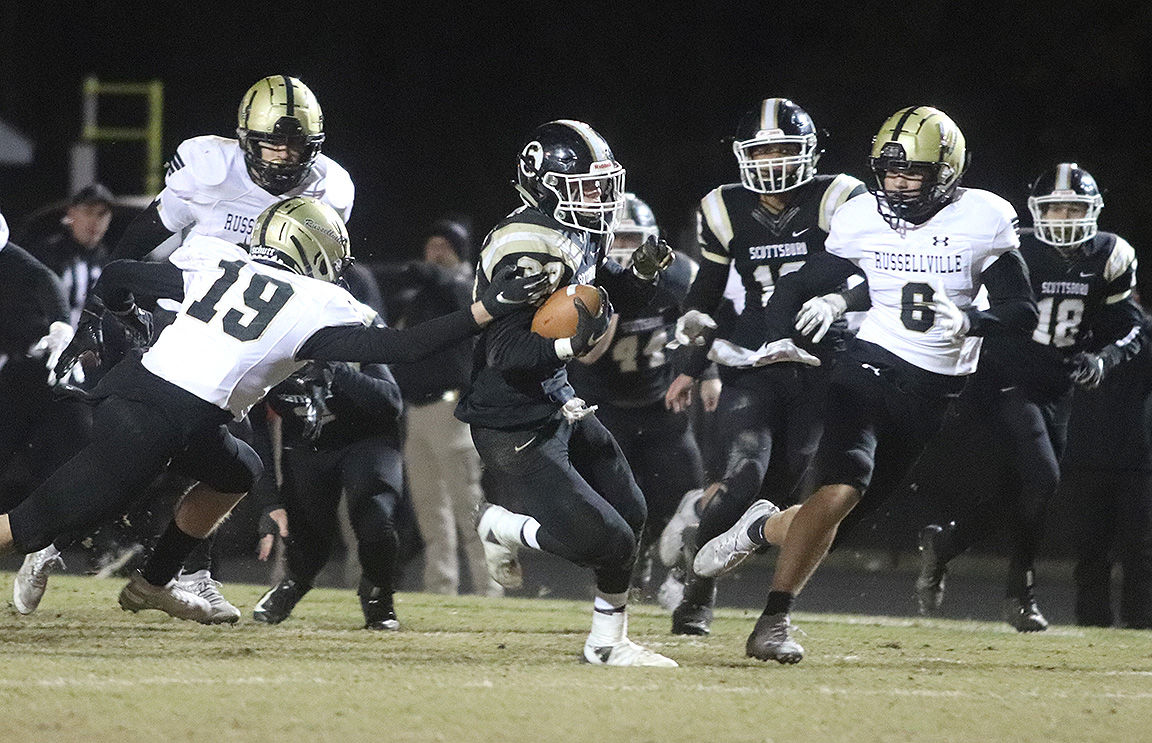 Rylee Whitehead breaks away from Russellville tacklers on a 57-yard kickoff return that set up a touchdown during Scottsboro's 17-14  Class 5A first-round playoff win. 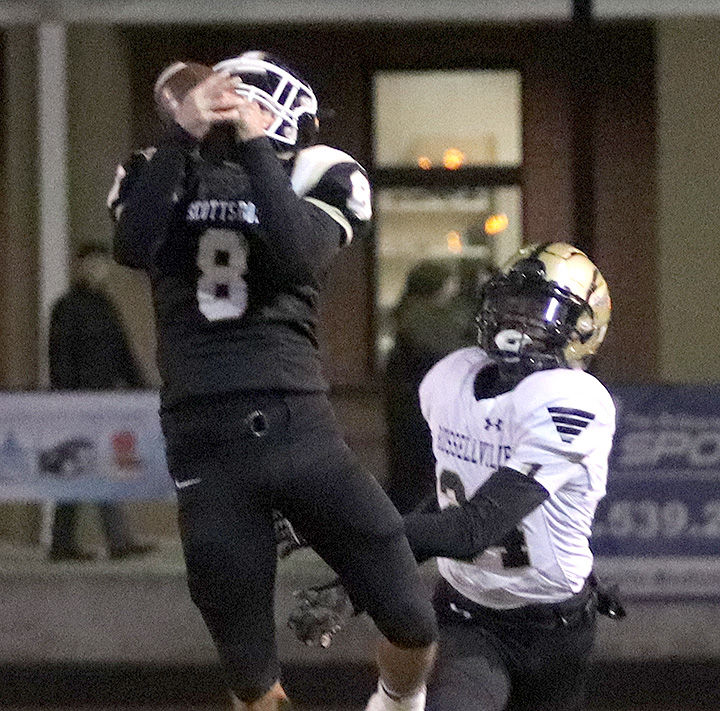 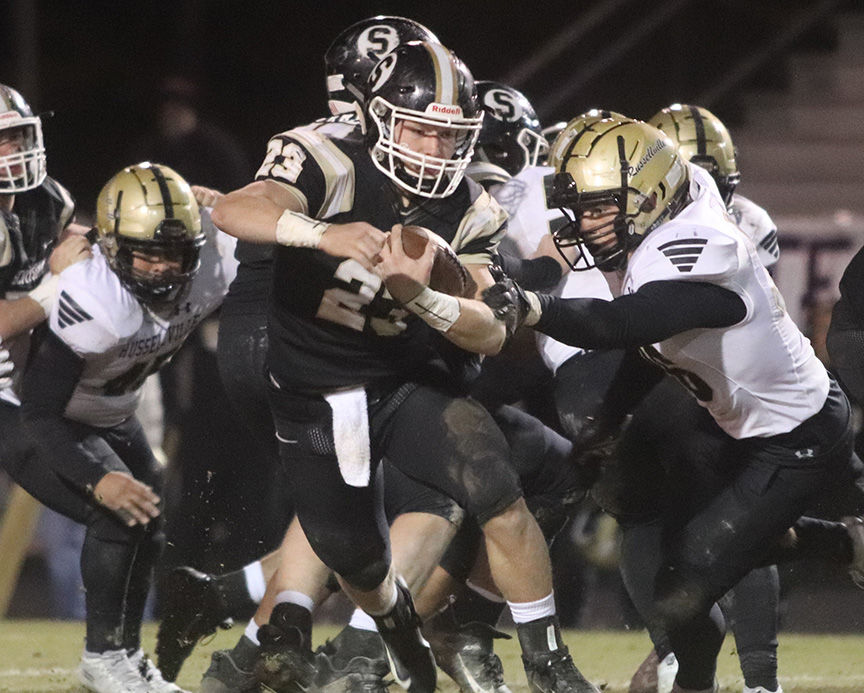 Cam Bass breaks out of a wall of Russellville defenders for yardage during Scottsboro's 17-14 Class 5A playoff win Friday. 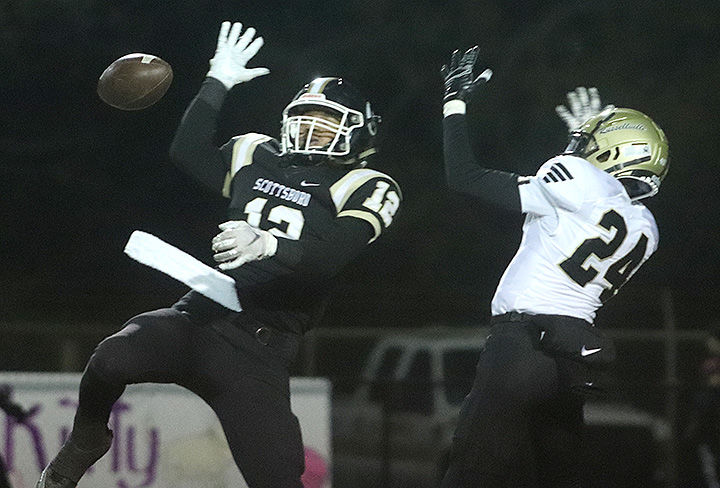 Scottsboro's Jordan Davis breaks up a Russellville pass on a fourth-down play. 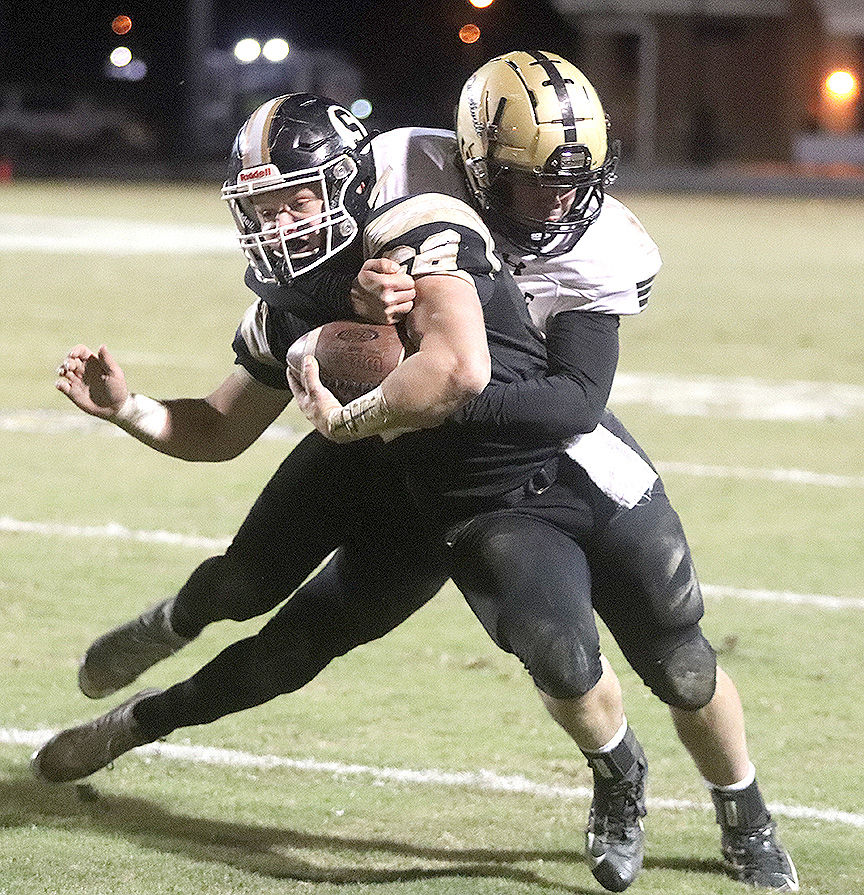 Rylee Whitehead breaks away from Russellville tacklers on a 57-yard kickoff return that set up a touchdown during Scottsboro's 17-14  Class 5A first-round playoff win.

Cam Bass breaks out of a wall of Russellville defenders for yardage during Scottsboro's 17-14 Class 5A playoff win Friday.

Scottsboro's Jordan Davis breaks up a Russellville pass on a fourth-down play.

SCOTTSBORO — Brandon Cloud made a game-saving tackle, then a game-sealing interception.

Cloud’s late heroics were among the many by Scottsboro players throughout a 17-14 Class 5A first-round playoff victory over visiting Russellville Friday night at Trammell Stadium.

Scottsboro (9-2) ran its winning streak to five with its first ever win over the Tigers and now will head to the Birmingham-area to take on Center Point in Round 2 next week. Center Point rolled past No. 5-ranked Etowah 42-13 in another first-round game on Friday.

“Now we’re in the Top 16. It’s a wonderful feeling,” said Scottsboro head coach Don Jacobs. “I’m so proud of these kids. They fought all night and that’s what it takes, particularly in a playoff situation where if you lose, you’re going home.”

The Wildcats won again with its typical brand of power rushing offense, pressure defense and some key special teams play. All three areas contributed to the victory with key plays in the second half after the game was tied 7-all at halftime.

Scottsboro ran for 210 yards while holding Russellville to only 46. The Golden Tigers had only four first downs.

Cam Bass ran for 122 yards for 23 carries for Scottsboro while Jacob Manning ran for 108 on 32 carries. Manning was 4-of-5 passing for 39 yards and also caught a 30-yard pass from Jordan Davis on a trick play that led to the Wildcats’ first touchdown, Manning’s 3-yard touchdown run on the first play of the second quarter. Russellville tied the score with 34 seconds left in the half when Torey King caught a short pass, broke a tackle and raced to the end zone for a 65-yard touchdown catch.

Airreon McCulloch’s 54-yard touchdown run gave the Golden Tigers a 14-7 lead with 4:24 remaining in the third quarter, but Scottsboro answered immediately to tie the score.

Rylee Whitehead returned the ensuing kickoff 57 yards to the Russellville 23-yard line, and Manning hit a wide open Cloud for a touchdown on the next play followed Mees de Jongh’s second PAT tying the game.

“The kickoff return right after (Russellville’s) touchdown — everybody’s down and out — the special teams come through and runs it back to (23-yard line),” Jacobs said. “Then we called the go-route. I’m still not sure Cloud knows he was supposed to get the ball, but anyway, he did a good job and caught it.”

After Scottsboro’s defense forced Russellville to punt, the Scottsboro offense went on an 18-play, 62-yard drive that started late in the third quarter and ended with 4:57 remaining in the fourth with de Jongh’s 26-yard go-ahead field goal.

Russellville reached the Scottsboro 28-yard line when Joshua Ray made a circus catch in tight coverage on a pass from Jacob Bishop and raced toward the end zone before a hustling Cloud made a touchdown-saving tackle. Two plays later, Camden Skipper forced Bishop from the pocket and his pass was intercepted by Cloud at the Scottsboro 20 with 3:18 remaining.

Russellville eventually forced Scottsboro into a punting situation with 57 seconds left in the game, but two Golden Tigers ran into punter Brody Hyde and the penalty yardage was enough for a Scottsboro first down, allowing the Wildcats to run out the clock.

“The kids were resilient. They never quit, they just kept playing,” Jacobs said. “Keep playing — that was our only message — and something good was going to happen.”