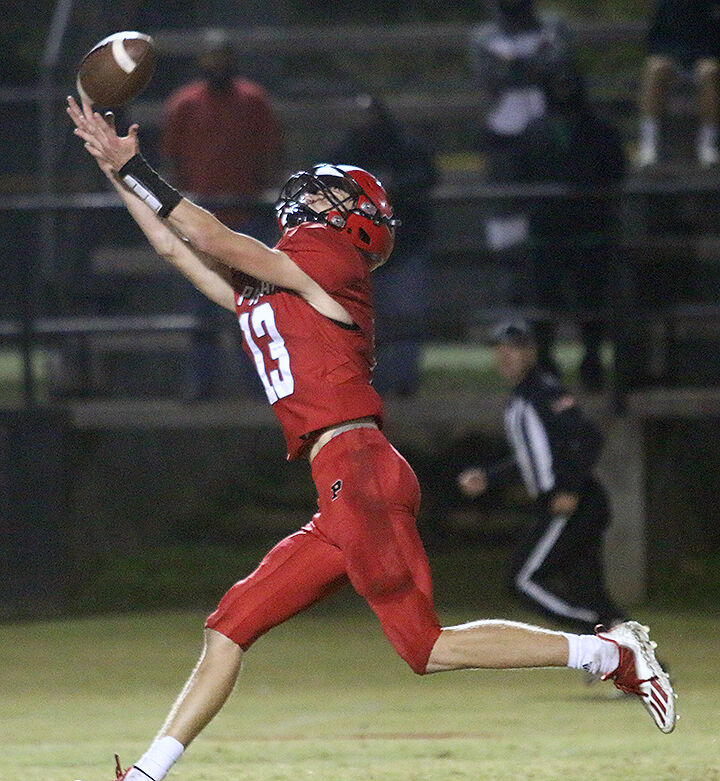 Pisgah senior Jake Hendricks hauls in a touchdown pass to put the Eagles in front late in the fourth quarter of their 14-13 win over Tanner. 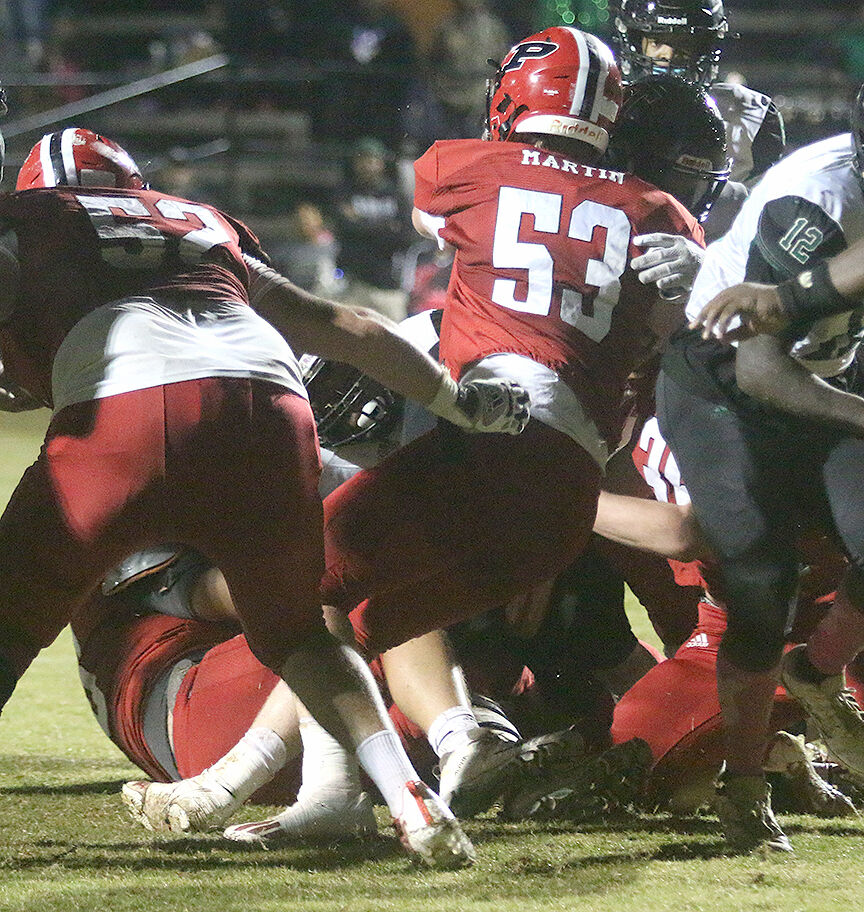 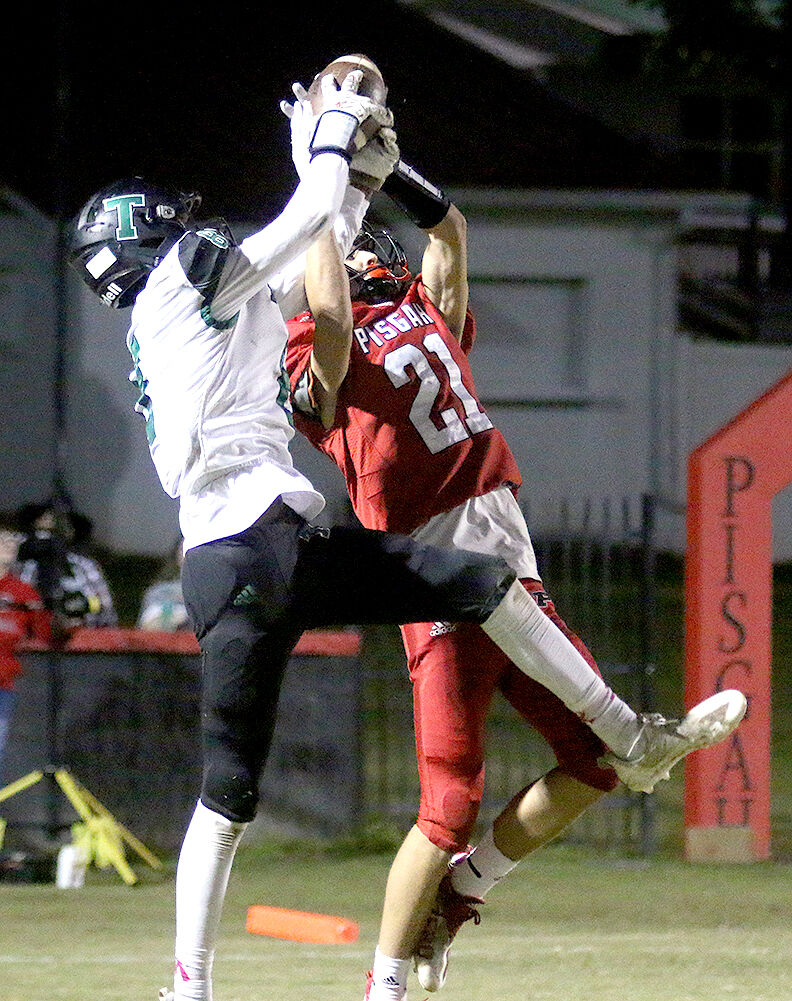 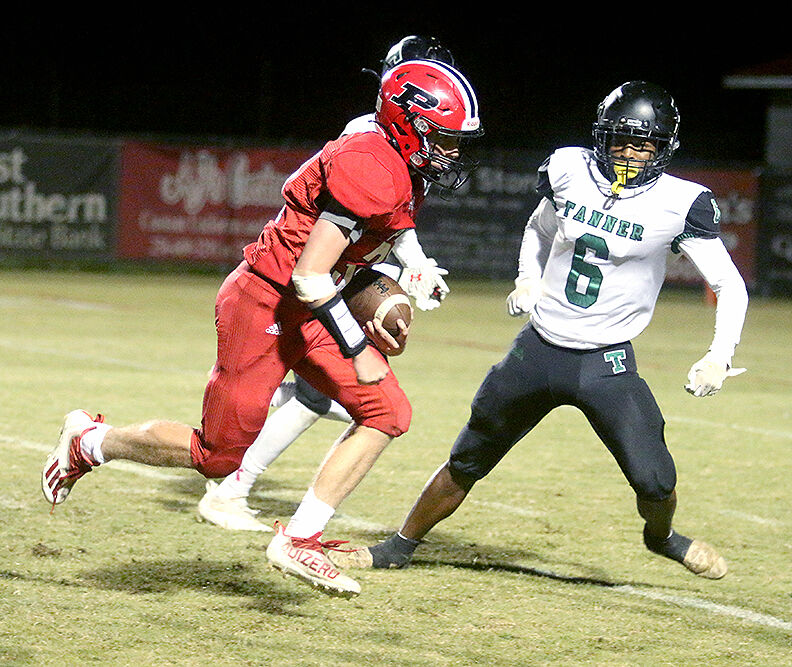 Legion McCrary races for the end zone for a 24-yard touchdown in the third quarter of  Pisgah's 14-13, region-title clinching victory over Tanner Friday night.

The Pisgah sideline erupts in celebration after stopping Tanner's go-ahead two-point conversion try in the final minute of a 14-13, Class 2A Region 7 championship clinching win Friday night at Sam Kenimer Stadium in Pisgah.

Rhyan Barrett runs toward the Pisgah sideline in celebration of Pisgah's 14-13, Class 2A Region 7 championship game win over Tanner Friday night. It is Pisgah’s first region title since 2003.

Pisgah senior Jake Hendricks hauls in a touchdown pass to put the Eagles in front late in the fourth quarter of their 14-13 win over Tanner.

Legion McCrary races for the end zone for a 24-yard touchdown in the third quarter of  Pisgah's 14-13, region-title clinching victory over Tanner Friday night.

Pisgah won the Class 2A Region 7 championship by inches.

The Eagles’ stopped Tanner’s go-ahead two-point conversion try with 51 seconds left, then recovered an onside kick and ran out the clock to claim a 14-13, Class 2A Region 7 championship clinching-win over the Rattlers Friday night at Sam Kenimer Stadium in Pisgah.

It’s the first region championship for Pisgah (6-3, 5-1) since 2003 and a major milestone in the four-year tenure of head coach Luke Pruitt, whose goal from Day 1 was to get the Eagles to moments like Friday night.

“Huge win for the program. Won the region for the first time in 18 years and most of our kids weren’t born yet,” Pruitt said. “I’m excited for our kids. I hope this is just the start of what’s to come.”

Pisgah will host Class 2A Region 5 No. 4-seed Sulligent in the opening round of the Class 2A playoffs on Nov. 5. Meanwhile, Tanner finishes as the region’s No. 2-seed.

Defense was a theme throughout the game. Neither team scored in the first half — Pisgah stopped Tanner twice deep in its territory, once on Grant Smith’s interception and another on a goal-line stand just before halftime — before the Eagles broke the ice in the third quarter.

It appeared Tanner had forced a three-and-out to start the third quarter, but Pisgah faked a punt, with Mason Holcomb hitting Rhyan Barrett for a 24-yard gain to the Tanner 30-yard line on fourth down-and-6. Two plays later, Legion McCrary raced 24 yards to the end zone to put Pisgah in front 6-0.

Tanner (6-3, 5-1) then drove to the Pisgah 8-yard line, but the Rattlers wound up turning it over on downs after Fox Tinker broke a Tanner pass at the goal line on fourth down. But after forcing a Pisgah punt, the Rattlers drove 40 yards on nine plays to go in front 7-6 on Trey Crutcher’s 10-yard touchdown run and Emanuel Gonzalez’s PAT with 7:40 remaining.

But the Pisgah offense, held in check most of the night, answered in a big way. Holcomb scrambled for 22 yards to convert a third down before throwing a 46-yard touchdown pass to Jake Hendricks with 4:32 remaining — Parker Law ran for two-point conversion — to put Pisgah in front 14-7.

“We had something else called, we got a mismatch we wanted, and (offensive coordinator Adam) Gilbert said ‘let’s take our shot right here.’ Coach Gilbert made a great play call. We protected up, Mason threw it and Jake went and got it.”

Tanner countered with an eight-play, 60-yard scoring drive capped off by Crutcher finding the end zone from 6 yards out on a fourth-and-1 play. The Rattlers decided to go for the win, but their bread-and-butter play with Crutcher that had produced most of the night was stopped short by Pisgah’s JD Martin, Dallon Phillips, Barrett and Caleb Green, sparking a wild Pisgah celebration.

“When you play good football teams, you have to make (defensive) stops,” Pruitt said. “We made one more stop than they did.”

Crutcher finished with 94 yards and two scores on 21 carries and also had a 31-yard reception on Tanner’s final possession from Karl Parham, who finished 5-of-12 passing for 59 yards. The Rattlers also got 74 rushing yards from Alex Guster and 36 rushing yards from Elinneaus Orr.

Holcomb finished 5-of-10 passing for 92 yards while McCrary ran for 48 yards on 13 carries for Pisgah, which has won six straight games after losing its first three games of the season.

“We started 0-3, but we told them after the Falkville game that we’ve got the pieces, they just had to believe in themselves,” Pruitt said. “We started to believe. I’m so proud of our kids. This is awesome.”