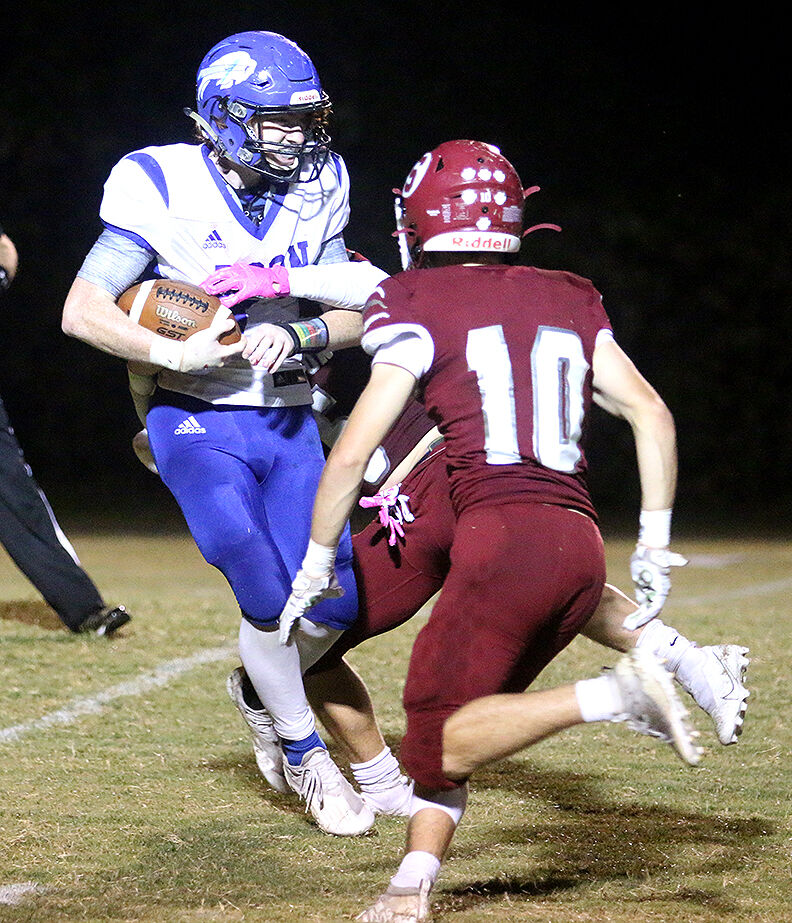 Mason Smith (left) spins out of a tackle attempt by Section to score the game-wining touchdown during NSM's 42-34 win Friday night. 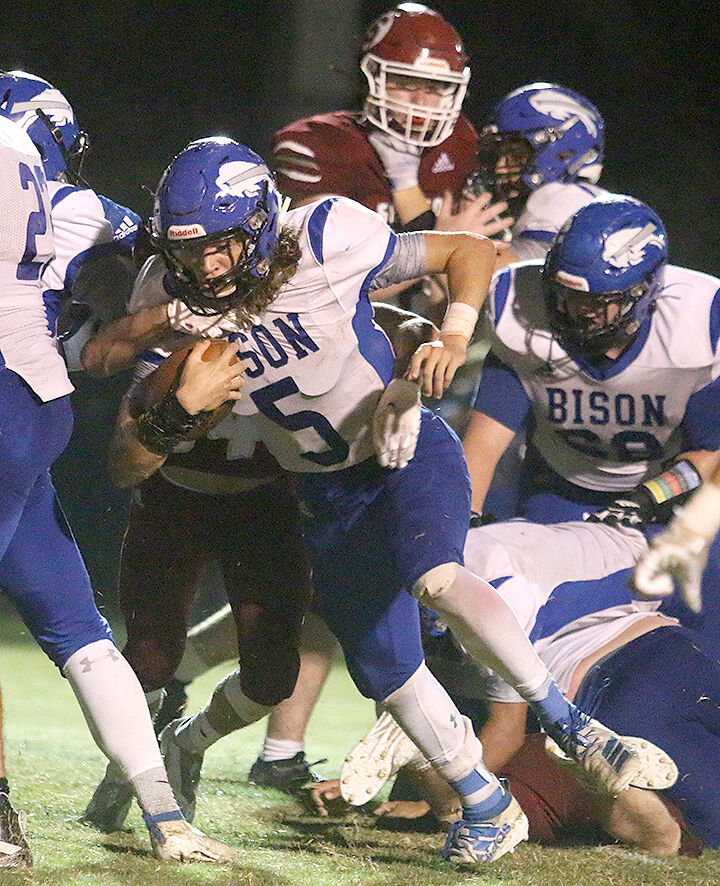 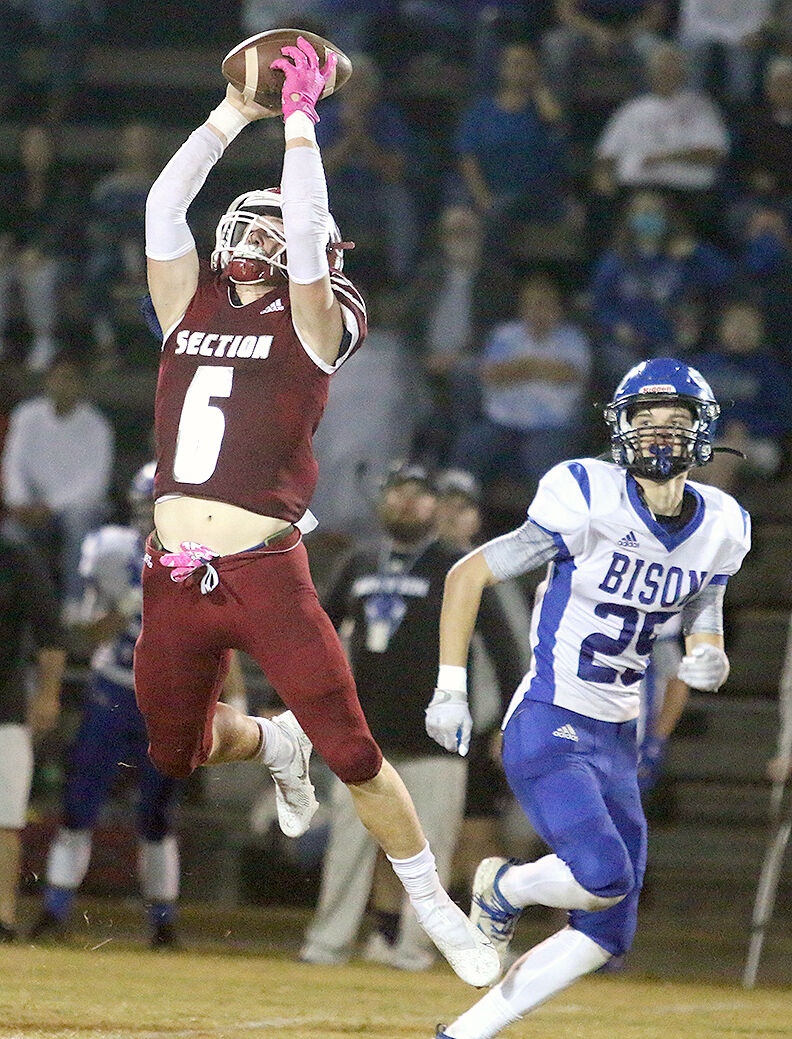 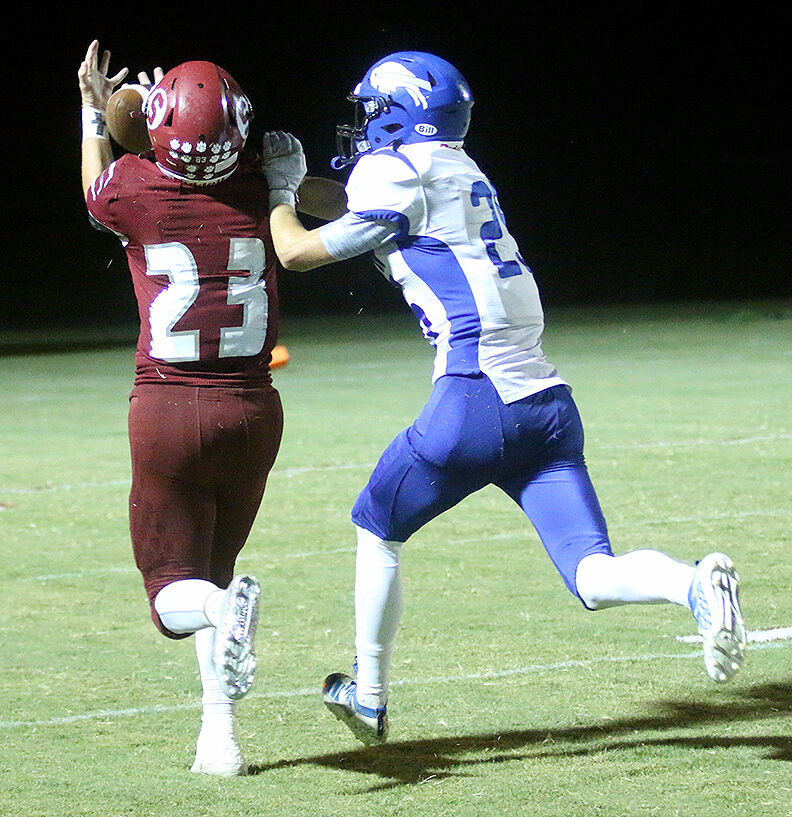 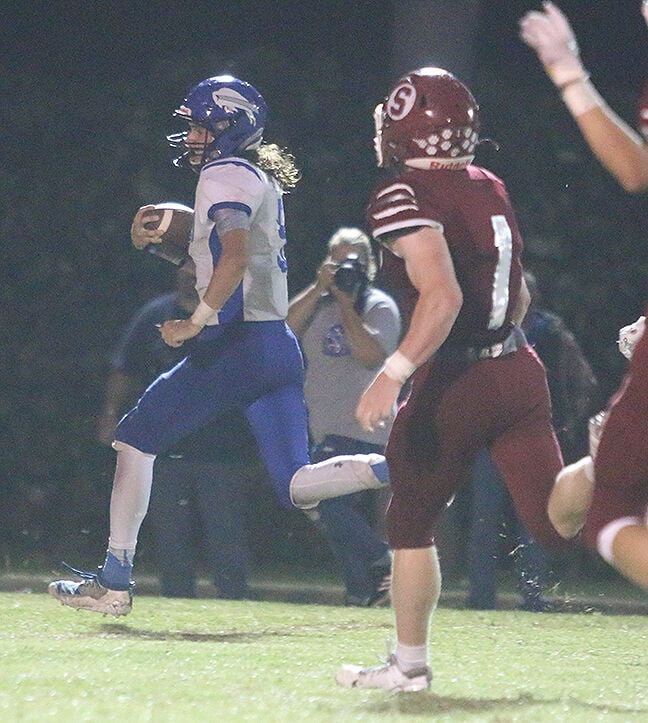 Derek Bearden heads for the end zone on a 62-yard touchdown run in the fourth quarter of NSM's 42-34 Class 2A Region 7 win over rival Section Friday night.

Mason Smith (left) spins out of a tackle attempt by Section to score the game-wining touchdown during NSM's 42-34 win Friday night.

Derek Bearden heads for the end zone on a 62-yard touchdown run in the fourth quarter of NSM's 42-34 Class 2A Region 7 win over rival Section Friday night.

The North Sand Mountain Bison, off to an 0-2 start, proved their demise, especially offensively, has been greatly exaggerated.

On a cool September night in Section, NSM got off to a great start, held on from a comeback fight from the Lions and pulled out a key Class 2A Region 7 win by defeating Section 42-34.

It was a night of big plays, but in the end, the Bison made a couple more, behind a strong rushing attack. After scoring only seven points in its first two games, NSM head coach Keith Kirby moved his best athlete, Derek Bearden, to quarterback and inserted a freshman running back, Alex Luna, and that made a difference.

But the Lions, behind Drake McCutchen, fought back from an early 12-0 deficit and later a 20-12 deficit, making it interesting throughout.

“Hat’s off to our kids,” said Kirby. “They just kept fighting and found a way. We’ve still got to be able to finish games in a better fashion.”

The Bison scored on their first possession, driving 75 yards. Luna had 42 yards in the drive, including the final 21 yards for a score. A try for two points failed, but the Bison led 6-0 with 7:58 left in the quarter.

After stopping Section on its first drive, NSM drove 76 yards. The key play came on Bearden pass to receiver Nyle Poore, who then connected with Blake Hill for 35 yards. A few plays later, Bearden snuck in from a yard out, making it 12-0 with 10:26 left in the half.

The Lions battled back, first scoring on a 22-yard run by McCutchen that cut it to 12-6 with 1:30 left. The Bison drove to the Section 16 before turning the ball over on downs with only three seconds left.

After a penalty moved the Lions back to their own 11, McCutchen took the snap and broke loose to the 50, where he was hit and fumbled. From there, Cameron Summerford picked up the ball and raced 50 yards for a touchdown. The PAT failed, but the game was tied 12-12 at halftime.

“I am proud of our kids,” said Section head coach Chris Hammon. “They never quit. They just got back up and kept fighting.”

Section received the second half kick but failed to convert after faking a punt at their own 34. The Bison made them pay, as Bearden ran for 14 yards, and two plays later, barreled over two Section defenders for a 15-yard touchdown run. Mason Smith scored on a two-point run to put NSM ahead 20-12 with 8:26 left in the third quarter.

Section answered, behind McCutchen. Quarterback Jacob Cooper connected with McCutchen down the sideline for a 36-yard touchdown. Dominik Blair scored on a two-point conversion, tying it at 20-20 with 3:58 left in the quarter.

“We had chances to get off the field on third and long situations,” said Hammon. We just weren’t able to. They made plays.”

None bigger than Bearden’s 62-yard scamper with 5:27 left. Smith added the two points to give the Bison a 36-26 lead. The Bison increased it even more after Levi Pettijohn sacked Cooper, causing a fumble, which Tanner Boatfield recovered at the Section 25. After a penalty, Smith scored on a 30-yard run and added two points, to push the lead to 42-26 with 4:40 left.

Section fought back again. Cooper connected with Blair on a 61-yard score. Blair threw to Summerford for two points, cutting it to 42-34 with 3:21 left.

After recovering an onside kick, NSM ran out the clock for the win.

Luna finished with 127 yards and a touchdown on 18 carries for NSM. Bearden had 117 yards rushing and four touchdowns on 17 carries, while passing for 68 more yards on seven completions.