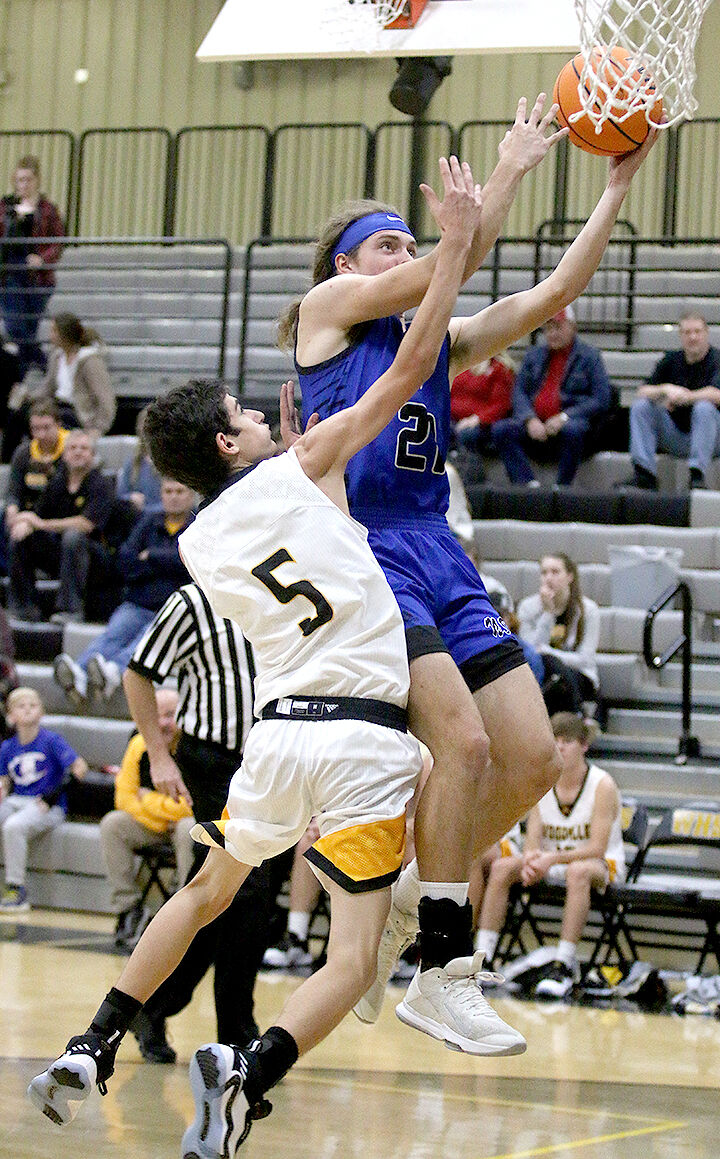 Derek Bearden goes in for a layup as Woodville's Wyatt Hutchens (5) challenges the shot during NSM's 83-49 win. 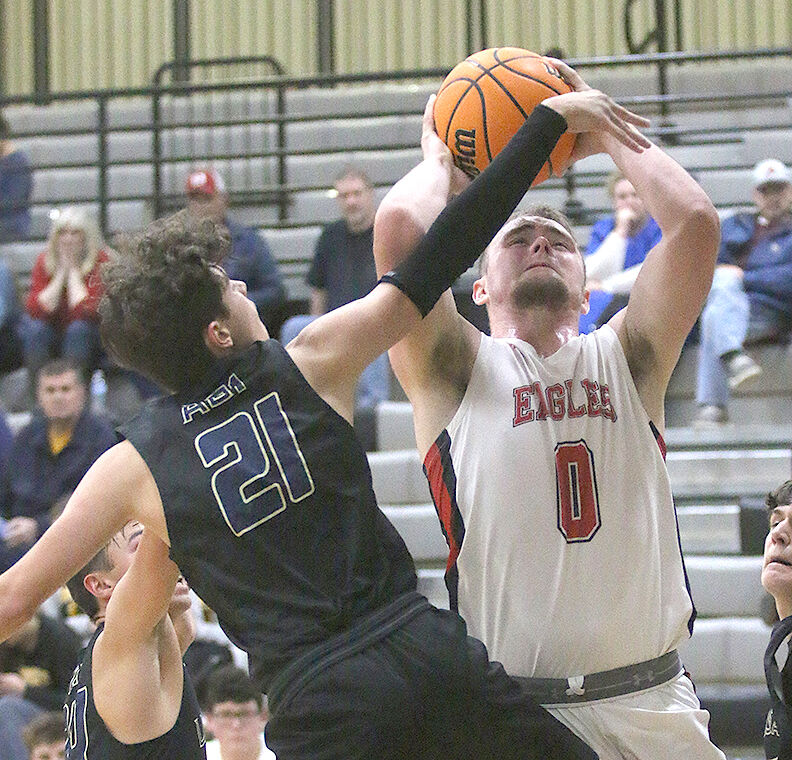 Rhyan Barrett goes up for a two of his 16 points during Pisgah's win over Lindsay Lane. 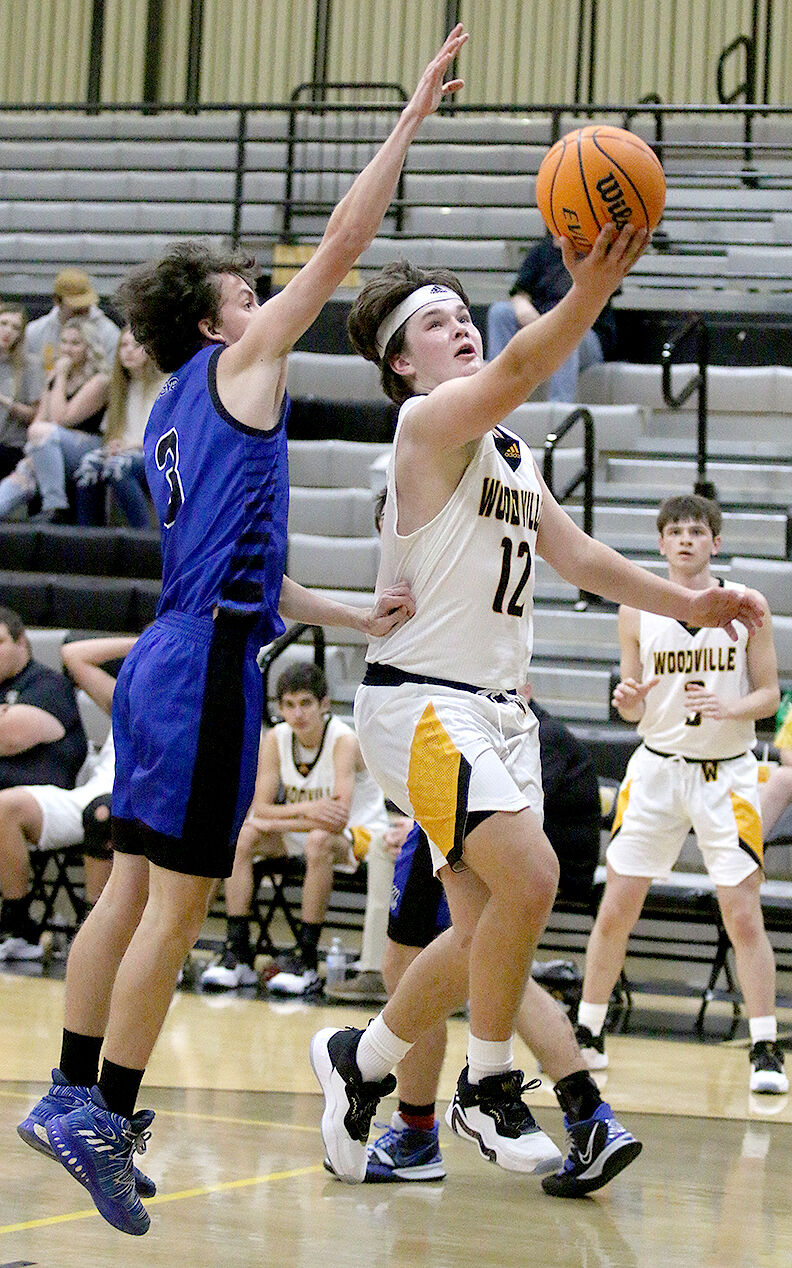 Woodville's Garrett Copeland (12) goes in for a layup as NSM's Devan Crowe tries to block the shot.

The North Sand Mountain varsity boys basketball team’s defensive performance Monday night is what head coach Cole Hicks called the blueprint for how he wants the Bison to play this season.

NSM harassed Woodville into numerous turnovers that turned into easy points during an 83-49 win Monday night in the Woodville Thanksgiving Tournament.

“That’s the plan,” Hicks said. “No complaints defensively. (Chaos) is what we’re trying to cause. We feel like if we can get people running, we like our chances.”

Derek Bearden scored a game-high 29 points for the Bison, who also got 15 from Chandler Sullivan, nine from Kaleb Helton, eight each from Nyle Poore and Jonah Slay, seven from Drue Carlton, four from Mason Smith and three from Josue Luna.

Damien Benson scored 16 points and Caleb Dolberry netted 12 for Woodville (1-1), which got six each from Garrett Copeland and Sam Peek, five from Brice Thompson and three from Wyatt Hutchens.

Pisgah 80, Lindsay Lane 56 — At Woodville, the Eagles turned their defense into offense on the way to a victory over Lindsay Lane during the Woodville Thanksgiving Tournament on Monday.

The Eagles got a lot of points off turnovers caused by its press.

“We came out shot the ball well, and it kind of gave us a spark on defense, and it all fed over into other parts of the game,” said Pisgah head coach Lamar Hendricks. “We’ve got to have a lot of kids contributing to do what we’re trying to do, and we had a lot of kids doing that.”

The Eagles had four players score in double figures and every Pisgah player scored.

Scottsboro 72, Dobyns-Bennett (Tenn.) 65 (OT) — At Hoover, the Wildcats rallied in the fourth quarter to force overtime and ultimately win in the opening round of the Jag Classic at Spain Park High School Monday night.

Tyson Sexton and Parker Bell scored 15 points each for Scottsboro, which also got 13 points from Seth Whitmire, 10 from Kyle Wright, nine from Ethan Roberts and eight from Cordell Worthy.

Section 80, Ardmore 32 — At Clements, the Lions opened up a 34-point lead after one quarter on the way to the convincing win over Class 5A Ardmore at the Clements Thanksgiving Classic on Monday.

Alex Guinn paced Section with 19 points while Logan Patterson had 16, Ethan Lemieux had 15, Jacob Cooper had 12, Jared Reed had seven and Antoine Jonathan had five.

Skyline 52, Asbury 38 — At Geraldine, the Vikings rallied in the second half to defeat Asbury during the Geraldine Thanksgiving Tournament on Monday.