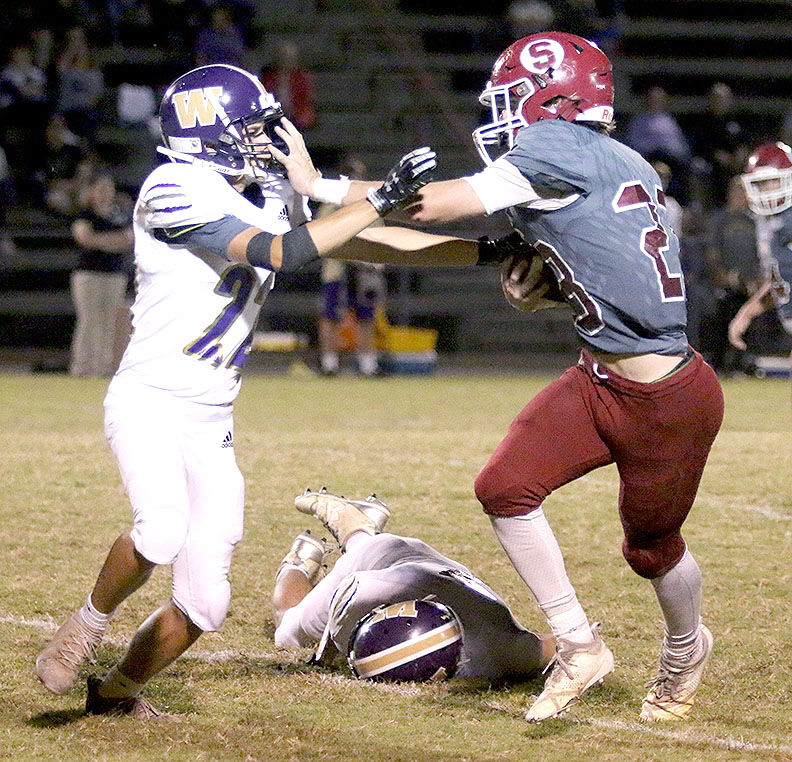 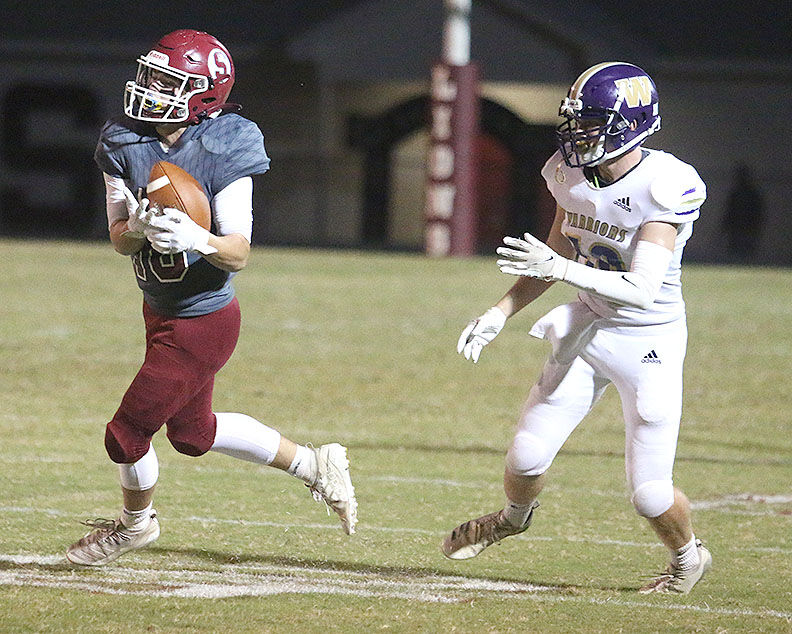 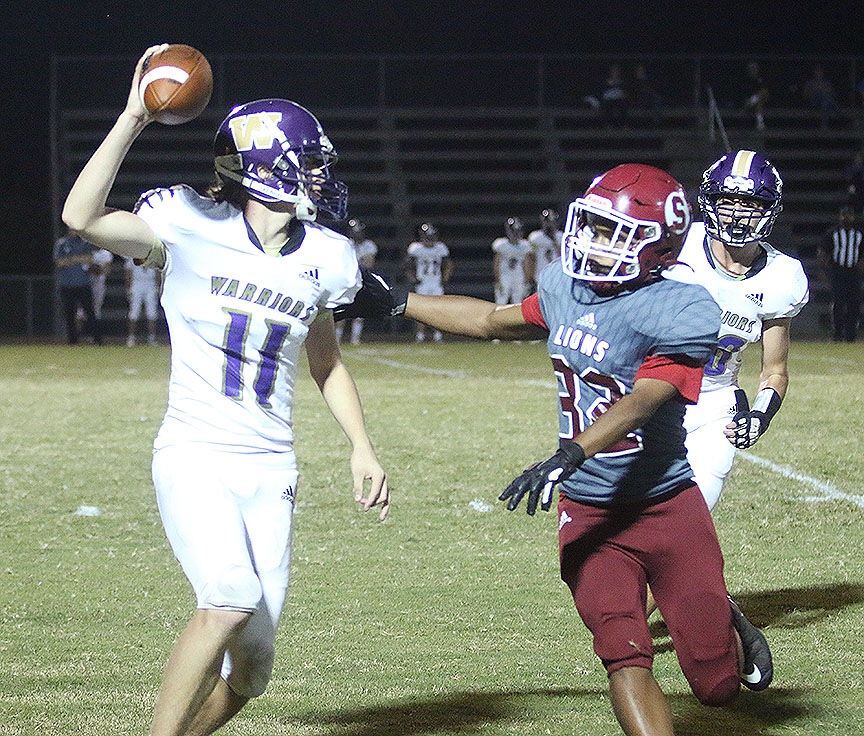 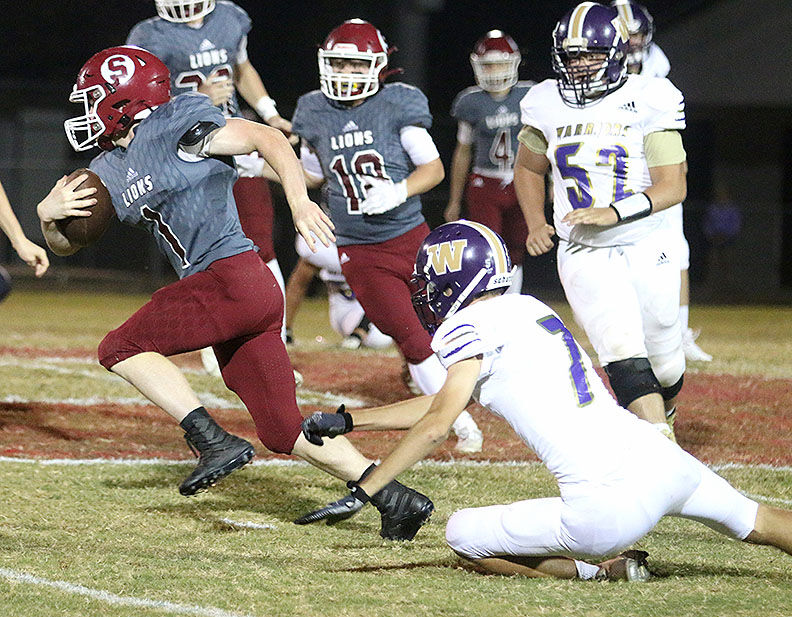 Jr. Walker (1) finds an opening for a big run during Section's 47-22 Class 2A Region 7 victory over Whitesburg Christian Thursday night.

Jr. Walker (1) finds an opening for a big run during Section's 47-22 Class 2A Region 7 victory over Whitesburg Christian Thursday night.

Section High School homecoming queen Jennifer Vega and the Section football team had something in common on Thursday.

They both ran right through the competition — Vega while winning the Jackson County Girls Cross Country championship and the Lions on the way to victory on the gridiron.

Section bolted to a 47-0 halftime lead on the way to a 47-22 Class 2A Region 7 and Homecoming win over visiting Whitesburg Christian.

“We came out and played some good football,” said Section head coach Chris Hammon. “We played really physically, which was a good sign. To bounce back (from a two-week break and a loss to Falkville) and then get things back on track was good for us.”

The win moved Section (4-3, 3-2) into position to officially clinch a playoff spot. The Lions can officially lock themselves in as the region’s No. 3 seed if they win their region finale next week at Pisgah. If Section loses, the Lions must wait out the results of Week 9 region games and possibly Week 10 tiebreakers to determine their playoff fate.

Section left nothing to chance Thursday night, dominating Whitesburg Christian (2-5, 0-4) from the start.

Section rushed for 327 yards for the game, including 168 yards in the first quarter while building a 27-0 lead.

Drake McCutchen ran for 148 yards and four touchdowns on nine carries while Connor Sronvi ran for 54 yards, Jr. Walker ran for 47 yards, Kade Harper ran for 38 yards and Cameron Summerfield ran for 36 yards. Section did not attempt a pass.

“The offensive line was getting good movement and Drake and Jr. had some long runs,” Hammon said.

McCutchen capped Section’s first drive with a 30-yard touchdown run, and four plays after Walker blocked a Whitesburg Christian punt, he scored on a 10-yard touchdown run to give the Lions a 12-0 lead with 3:11 left in the opening quarter.

Harper recovered a Whitesburg Christian fumble on the next play from scrimmage, and McCutchen went 14 yards for the score on the next play. Jase Holcomb then passed to Jacob Cooper for the two-point conversion and a 20-0 lead.

After Whitesburg went three-and-out, Section increased its lead to 27-0 on McCutchen’s 45-yard touchdown run and the first of Alex Guinn’s three PATs.

McCutchen scored on a 34-yard touchdown run two minutes into the second quarter to put the Lions in front 34-0 before Sronvi’s 54-yard scoring run less than four minutes later gave Section a 41-0 lead.

Section’s final score came with 53 seconds left in the half when Harper, a senior lineman, got a took a handoff in the backfield and went 36 yards for a touchdown.

Whitesburg Christian got on the scoreboard midway through the third quarter before adding two more scores in the fourth quarter.