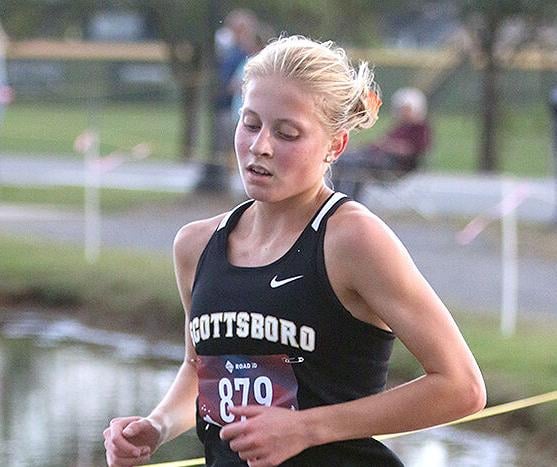 Maddie Gossett and Scottsboro run in the Class 6A Girls Section 6 Meet Thursday in Huntsville. 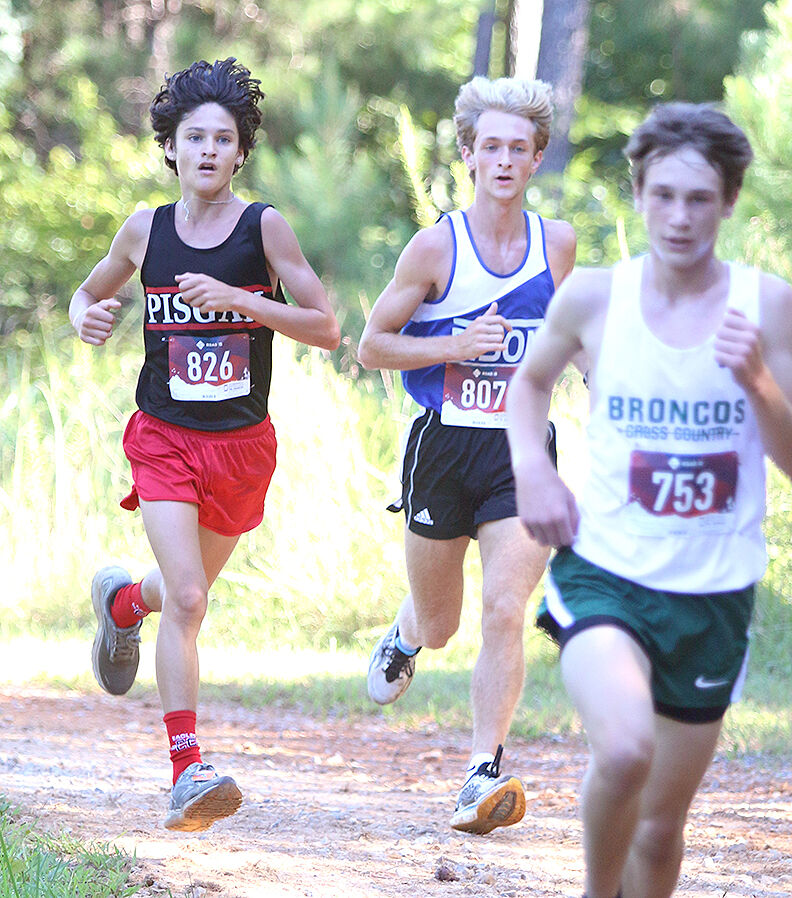 Pisgah's Tristan Little (left) and NSM's Lane Gamble (center) are two of the local runners who will race in the Class 1A-2A Section 4 Race on Thursday.

Maddie Gossett and Scottsboro run in the Class 6A Girls Section 6 Meet Thursday in Huntsville.

Pisgah's Tristan Little (left) and NSM's Lane Gamble (center) are two of the local runners who will race in the Class 1A-2A Section 4 Race on Thursday.

Race times for the John Hunt Park Sectionals were changed from Thursday morning to Thursday afternoon start times because of the weather forecaset.

The top-four teams in each sectional and the top-six individual finishers not on the roster of a top-four team advance to the AHSAA Cross Country Championships at Oakville Indian Mounds Park near Moulton on Nov. 6.

Class 6A Section 6 — The Scottsboro varsity boys cross country team will look to repeat as sectional champion and book its spot at state.

The Class 6A Boys Section 6 race is set for 3:05 p.m. at John Hunt Park in Huntsville on Thursday. Competing in the 6A sectional are Scottsboro, Buckhorn, Columbia, Decatur, Hartselle, Hazel Green, Muscle Shoals and Randolph.

For the Wildcats, it’s the next stop in the quest for a fifth straight state title. After winning four consecutive Class 5A state titles, Scottsboro won the Class 6A state championship last season.

The Wildcats won the Class 6A Section 6 Boys race last year with a perfect score of 15.

Scottsboro head coach Luke Robinson said the goal is go run a better race than they have this season.

“The boys who goal is to be the best team — Class 1A through 7A — in the state,” Robinson said. “If we’re going to do that, we’ve got to stop leaving some stuff out there. We’ve got to close some gaps and we’ve got to close (races) better. We can’t get comfortable and kind of settle. You do that at state and you get whipped.”

Meanwhile, the Scottsboro varsity girls go for a sectional repeat.

The Class 6A Girls Section 6 race is set for 2:15 p.m. at John Hunt Park in Huntsville.

Scottsboro and Fort Payne are the leading contenders for the sectional title. They’ve traded wins over one another this season, so another close race between the two are expected for Thursday’s sectional. Both area state title contenders as well.

“The girls focus is to believe, as a whole (team), that they can do it,” Robinson said. “We’ve got to get rid of any doubt.

Class 1A Section 4 Meet — The Pisgah boys go for the sectional repeat after winning the title over Lindsay Lane by one point last season while the Pisgah girls look to grab a sectional title after finishing second a year ago.

“It is a tough sectional,” said Pisgah head coach Gus Hembree. “My kids know we will have to have a great race to compete.”

Section will also have full teams running in each sectional after being unable to do so last season.

“They have trained hard and have seen their hard work pay off over the last few races. The past few races, they have set new PRs and I am looking forward to seeing how they perform at sectionals,” said Section coach Melissa McCutchen. “I feel like they will do well, this is a fast course and they have to continue to run this race with the same intensity that they have been running the past few races with.”

NSM’s only runner for sectionals is senior Lane Gamble, who will be among the favorites to advance to state as an individual.

“I think he will perform well,” said NSM coach Colby Palmer. “Lane has worked hard for four long years and has really been the staple for NSM Cross Country. His goal is to make it to the state meet. Lane has only virtually toured the course, but he feels confident he can have a PR on the course and finish strong.”

“I am really hoping that we have some who qualify for the state meet. They have been working hard and know what it will take for that to happen. I know they will run their best race and give it all that they have at sectionals,” said Skyline coach Rhonda Saint. “Everyone is healthy and looking forward to seeing how they perform. My runners love the course at John Hunt Park. It is a flat and fast course. There are always some great times run on that course. I hope we see some PRs there from my runners.”

Woodville will also have runners back in the sectional boys race after not having any last season.

“Our runners are upbeat and excited about the upcoming meet,” said Woodville coach Jonathan Parsons. “We are coming in off our strongest run of the year where two of the three runners set new personal records. In the last two weeks we have consistently gone down in our times. We are running well at the right time.”

Class 4A Section 2 — North Jackson runners travel to the Anniston area to compete in its sectional at the White Plains Sports Complex.

“I feel like this group runs hard and has improved a lot over the season,” said North Jackson coach Johnny Holman. “They will have to run the very best races of their lives to be able to qualify. I think they are very capable of making it.”