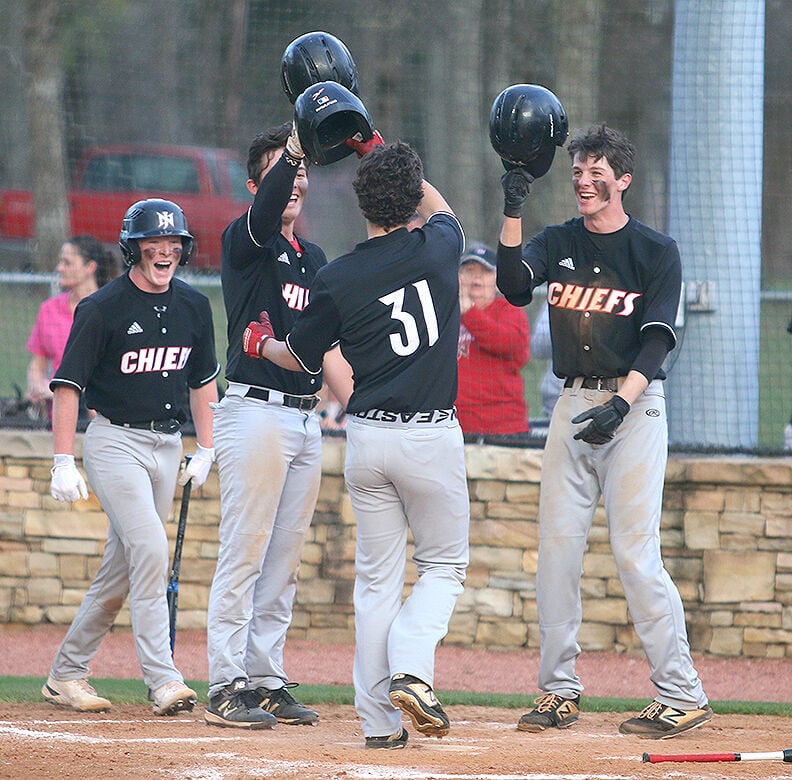 North Jackson freshman Nick Jernigan (31) is congratulated by teammates (from left) Macklin Guess, Caden Wynne and Dalton Morris after hitting a go-ahead, three-run home run during the No. 7-ranked Chiefs' 10-6 come-from-behind Class 4A Area 14 victory at DAR on Tuesday. 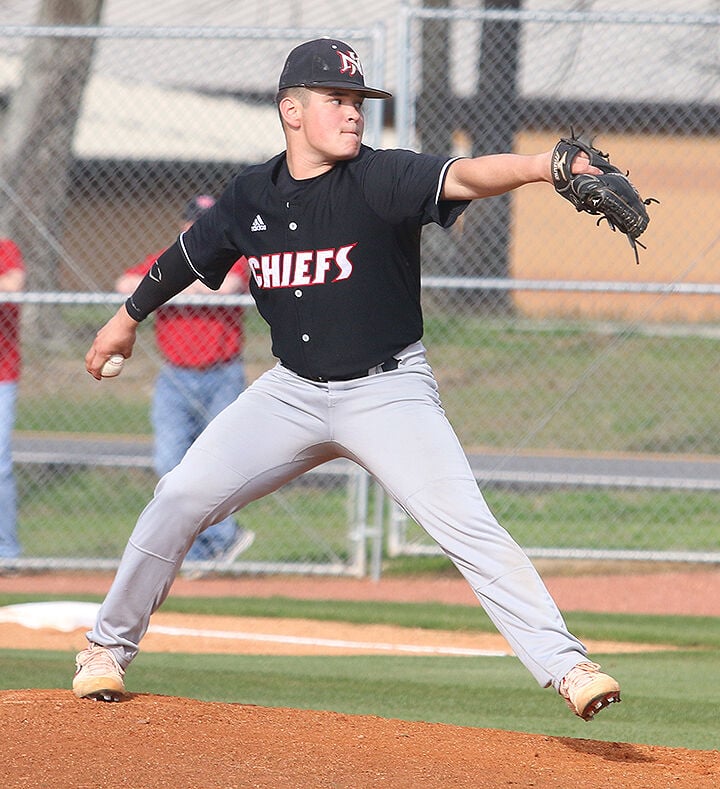 Carson Smith overcome early struggles to turn in a strong effort on the mound during North Jackson's 10-6 area win over DAR. 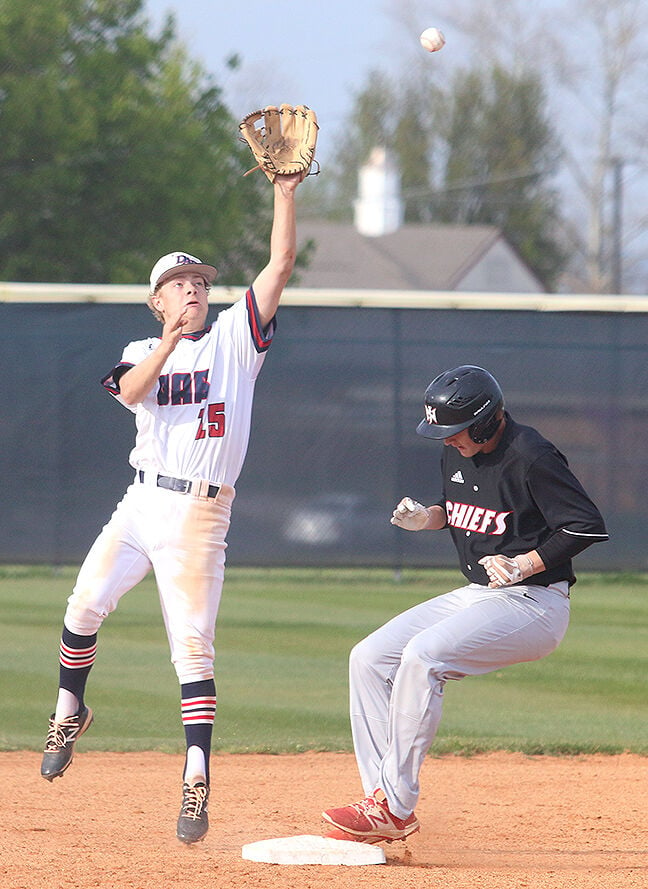 Landon Barnes beats the throw to second as DAR tries to record a force out during North Jackson's 10-6 Class 4A Area 14 win.

North Jackson freshman Nick Jernigan (31) is congratulated by teammates (from left) Macklin Guess, Caden Wynne and Dalton Morris after hitting a go-ahead, three-run home run during the No. 7-ranked Chiefs' 10-6 come-from-behind Class 4A Area 14 victory at DAR on Tuesday.

Carson Smith overcome early struggles to turn in a strong effort on the mound during North Jackson's 10-6 area win over DAR.

Landon Barnes beats the throw to second as DAR tries to record a force out during North Jackson's 10-6 Class 4A Area 14 win.

Nick Jernigan earned a nickname, Carson Smith earned more confidence in himself, and the North Jackson baseball team earned its way closer to an area championship.

Jernigan drove in six runs, and Smith stymied DAR hitters after some early struggles as the No. 7-ranked Chiefs rallied from a four-run deficit to defeat Class 4A Area 14 rival DAR 10-6 Tuesday night in Grant.

The win completed an area series sweep of DAR for North Jackson (18-5, 4-0), which secured a playoff berth with the victory. The Chiefs can clinch the Class 4A Area 14 championship with one win over Madison County next week.

Jernigan’s career best varsity game came at a perfect time for the Chiefs, who trailed 4-0 and 5-2 Jernigan keyed the comeback by going 3-for-4 with two doubles, six RBIs and a fourth-inning three-run homer that put North Jackson in front for good.

“He got a nickname today – ‘Slick Nick’” Porter with a laugh. “Very happy for him. He had a huge night. We struggle getting him in the lineup because he’s our pinch hitter. A lot of times we don’t play him because we want a hitter late in the game and He’s come up with some big hits (in that role). Credit (assistant coach) Rahley (Hessey), he said give Nick a chance today. I’m glad we did.”

DAR (7-7, 1-3), which is coached by Woodville alum Jacob Maynard, jumped out to a 4-0 lead in the bottom of the first inning. After North Jackson got two runs in the top of the second — another freshman, Caden Wynne, singled and scored on Jernigan’s RBI double while Jernigan later scored on a DAR error — DAR got a solo home run from Jarett for a 5-2 lead after two innings.

The Chiefs countered with a four-run top of the third inning, using a two-run single from Wynne and a two-run double from Jernigan to take a 6-5 lead. After DAR tied it 6-all in the bottom of the third, North Jackson grabbed a 10-6 lead in the fifth on Jernigan’s three-run homer to left field and Brandon Poole’s RBI double to right-center field.

“I was really happy with Carson Smith,” Porter said of the freshman pitcher. “I think we grew some right there. Struggling early but I think he gained some confidence by getting through it. If you’d told me he got to the sixth inning after that first (inning) I’d have bet you good money he wouldn’t. Very proud of him. He found it and got it going. He was cruising (when) the pitch count got him.”

At the plate, Poole, Wynne, Smith, Morris, Landon Barnes and Matt Adams all finished 2-for-4 for the Chiefs while Macklin Guess had one hit and one RBI. Mason, Kaleb Pitt, Chaz Stone (two RBIs) and Danny Bush had two hits each for DAR.

Although the Chiefs sport a lineup heavy on underclassmen including three to four freshmen depending on defensive alignments, Porter was proud of how they played like veterans after falling behind early.

“I think we’ve been in that position before and we just don’t freak out anymore,” he said. “They just relax and don’t press and just keep playing baseball.”

Down 3-2 in the seventh, Smith doubled to drive in Jonathan Linderman with the tying run for the Chiefs. In the eight, Adams singled with one out and scored two batters later on Wynne’s walk-off RBI single.

Mason finished 2-for-3 with a home run for DAR. He also recorded 13 strikeouts over seven innings pitched.