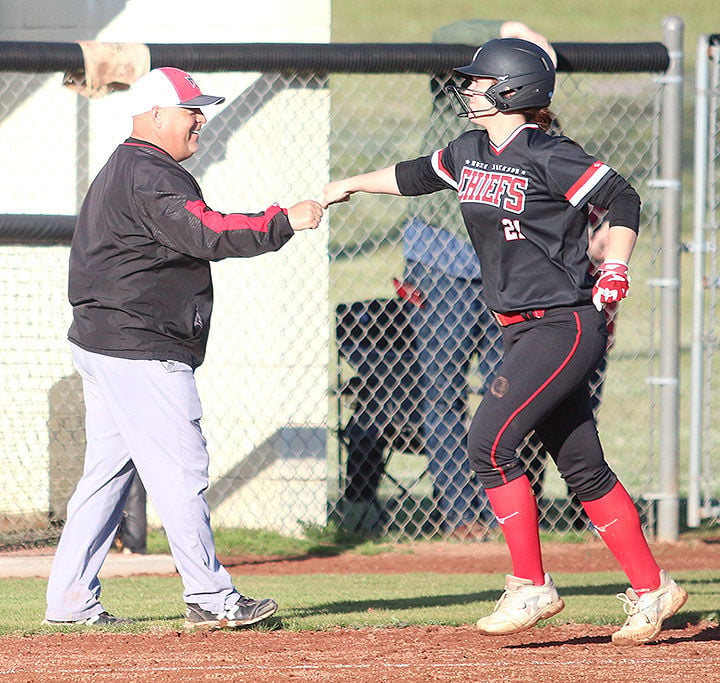 Coach Kevin Thompson congratulates Destry Lambert as she rounds third base after homering in North Jackson's 10-0 win at Scottsboro. 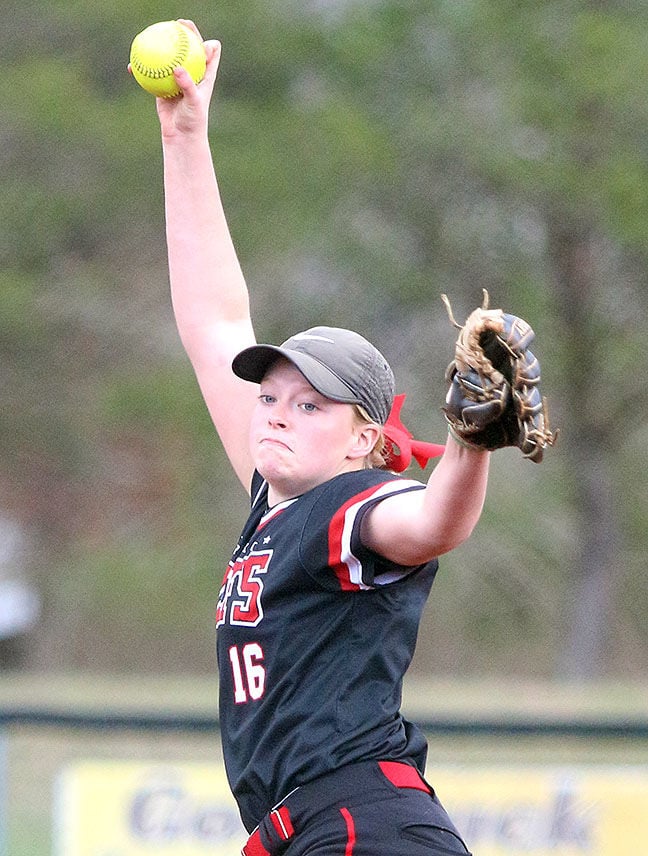 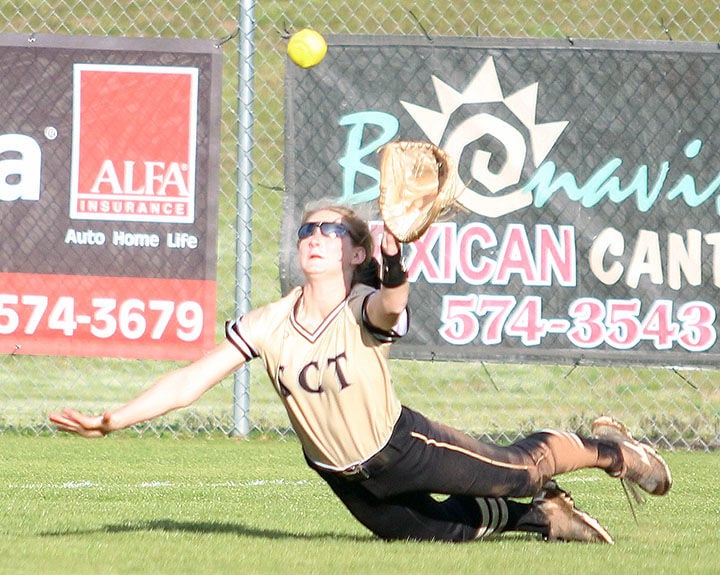 Lexie Bennett dives to catch a flyball in the left field for Scottsboro during its game Wednesday against North Jackson.

Coach Kevin Thompson congratulates Destry Lambert as she rounds third base after homering in North Jackson's 10-0 win at Scottsboro.

Lexie Bennett dives to catch a flyball in the left field for Scottsboro during its game Wednesday against North Jackson.

North Jackson softball coach Kevin Thompson was excited with how his team’s batters kept putting the softball in play against rival Scottsboro.

“Good things happen when you put the ball in play,” he said.

That “good thing” for North Jackson became a great thing for the team in the fifth, a seven-run inning in which the Class 4A No. 4-ranked Chiefs broke open a close game on the way to defeating its archrival 10-0 in six innings Wednesday afternoon at Scottsboro High School.

It was North Jackson’s second win over the Wildcats this season, a feat not accomplished by the program in more than 15 years.

“I thought (the players) had a good mindset,” Thompson said. “They didn’t know for sure if we were going to get this game in (because of the weather). We knew we had to bring an ‘A’ game because (Scottsboro) is always good and this is a good rivalry. Fortunately we came out ahead. Thankful for the win. We got some big hits. Our pitching did well. Our defense looked good. Proud of these girls and the work their putting in. Really good win for us.”

Hadley Burnette pitched a three-hit shutout for the Chiefs. The junior recorded six strikeouts while issuing only two walks.

“(Burnette) was moving the ball very well, spinning it well. She got in a zone,” Thompson said. “It’s probably one of the best pitching jobs I’ve seen her do. When she goes, we go. When she pitches well, we’ve got a chance.”

North Jackson (6-4-1) took a 1-0 lead on the third pitch of the game when Ja’Khia Hutchins homered before moving in front 2-0 in the second on Chloe Chisenall’s RBI double.

It stayed that way until the fifth, when Burnette reached on a two-out throwing error that allowed Chisenall, aboard after a leadoff single, to score. After Burnette scored on another Scottsboro error, Mikaela Barnes hit a two-run double, Trinity Seale hit an RBI single and Avery Wynne hit a two-run homer to give the Chiefs a 9-0 lead. Destry Lambert added a solo homer in the sixth inning to invoke the mercy rule.

Lexie Bennett, Alyssa Smart and Carlie Lynch all singled for Scottsboro (5-7), which has managed just five hits in its last two games.

“We’re just not playing to our potential right now,” said Scottsboro coach Robyn Johnson. “We have a lot more talent than what we’re showing.”