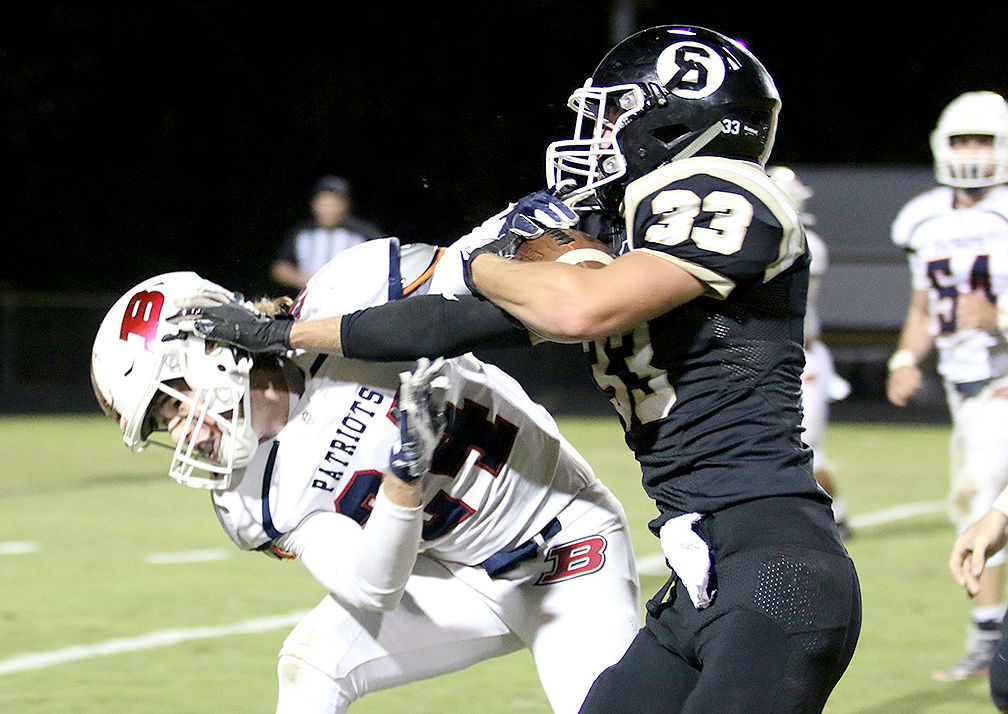 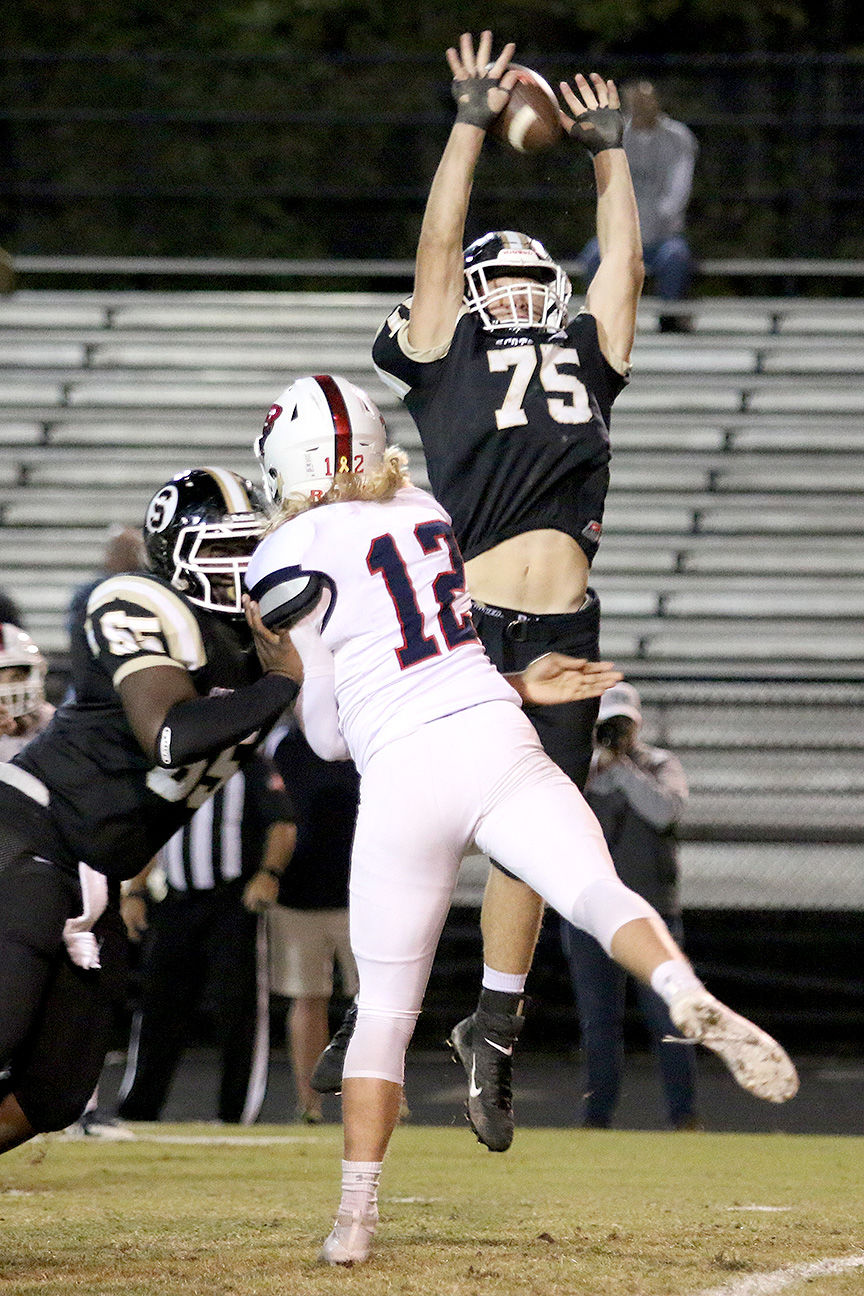 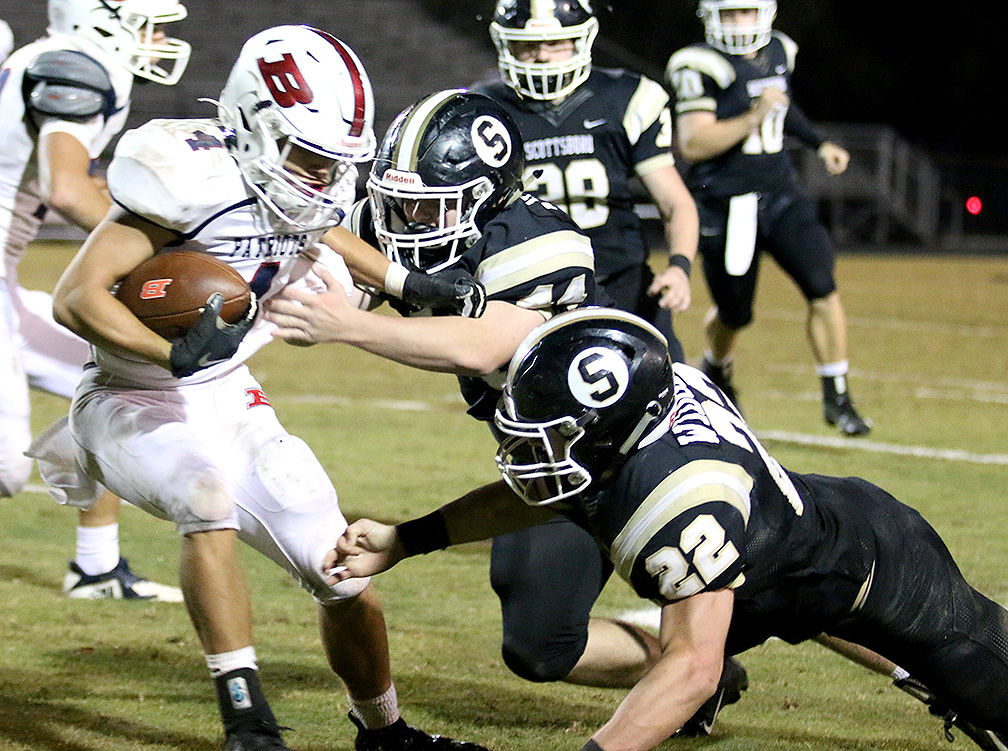 Will Dukes (44) and A.J. Widgeon (22) tackle Brewer running back Jonathan Morgan for a loss during Scottsboro's 35-0 win Thursday night. 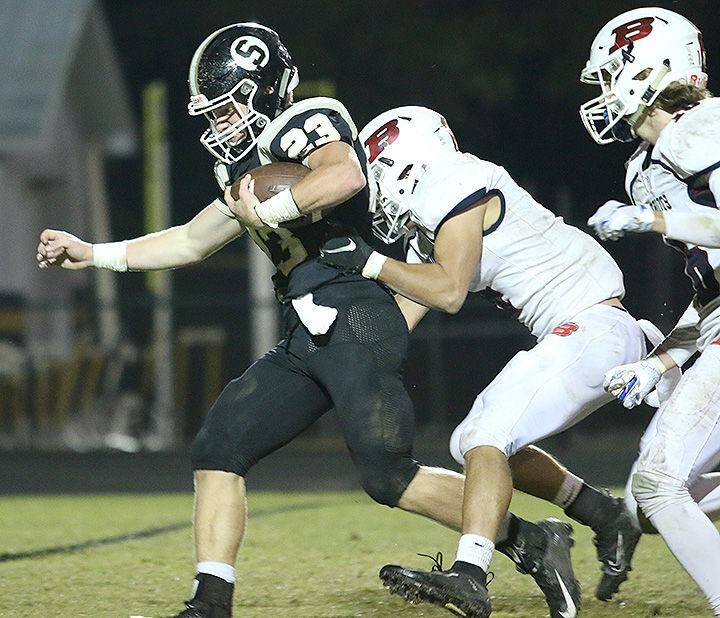 Cam Bass (23) drags a Brewer defender into the end zone during Scottsboro's 35-0 win.

Will Dukes (44) and A.J. Widgeon (22) tackle Brewer running back Jonathan Morgan for a loss during Scottsboro's 35-0 win Thursday night.

Cam Bass (23) drags a Brewer defender into the end zone during Scottsboro's 35-0 win.

SCOTTSBORO — No points. No yards. No first downs.

The Scottsboro defense pitched a perfect game Thursday night, turning in a dominating effort during the Wildcats’ 35-0 Class 5A Region 8 win over Brewer at Trammell Stadium.

Brewer’s longest play from scrimmage was a 10-yard pass from Patrick Johnson to Jonathan Morgan in the fourth quarter. The Patriots then lost yardage on the ensuing fourth-and-2 play, their last chance at picking up a first down.

It was the Scottsboro defense’s second shutout of the season and the fifth time in nine games it has held an opponent to two touchdowns or less.

Bass led the Wildcats with 121 rushing yards and one touchdown on 22 carries and Manning ran for 98 yards and four scores on 14 carries while Rylee Whitehead had 50 yards on four carries. Manning also completed 6 of 8 passes for 57 yards, with Whitehead and Malik Willis catching two passes each for 41 and 12 yards respectively.

A special teams play led to the first Scottsboro score of the game. Manning returned a punt 56 yards to the Brewer (3-6, 2-5) 18-yard line, and after a 16-yard run from Whitehead, Manning scored from 2 yards out. The first of placekicker Mees de Jongh’s five extra points gave Scottsboro a 7-0 lead midway through the first quarter.

“Wed did good things on special teams,” Jacobs said. “Proud of the offense. We executed (and) didn’t have a whole lot of (bad plays).”

The game was originally scheduled for Friday but was changed to Thursday night because of inclement weather in Friday’s forecast. Jacobs was proud of how his team handled the sudden change.

“The preparation was outstanding, even though it was a three-day (practice) week,” he said. “We discussed a lot of things during this week, particularly being ready to play. It doesn’t matter what day you play, as long as you’re ready to go.”

Scottsboro finished region play tied for the top spot with Madison County, which took the region title via the head-to-head tiebreaker. Scottsboro will be the region’s No. 2 and host Russellville in the first round of the Class 5A playoffs on Nov. 8. The Wildcats close the regular season next Friday at home against Class 6A Hartselle.