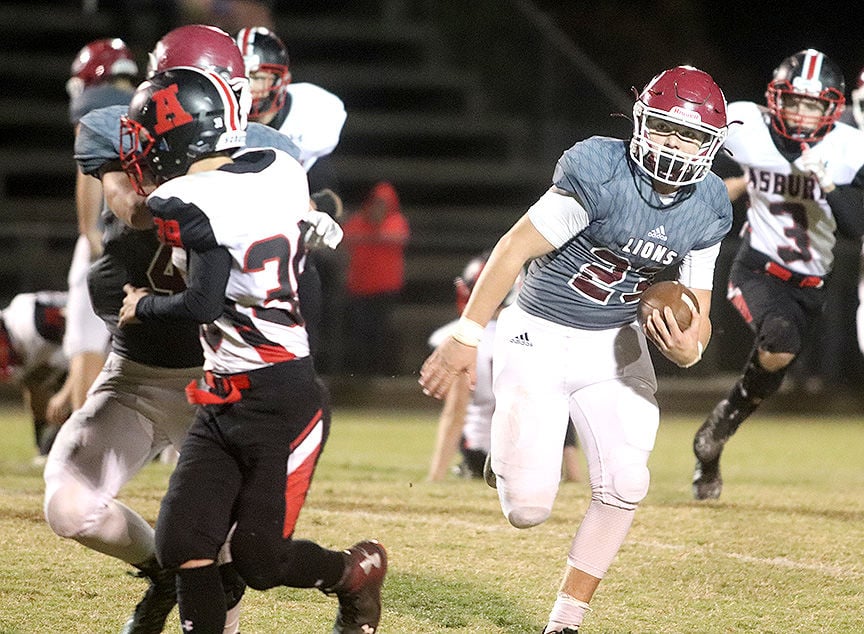 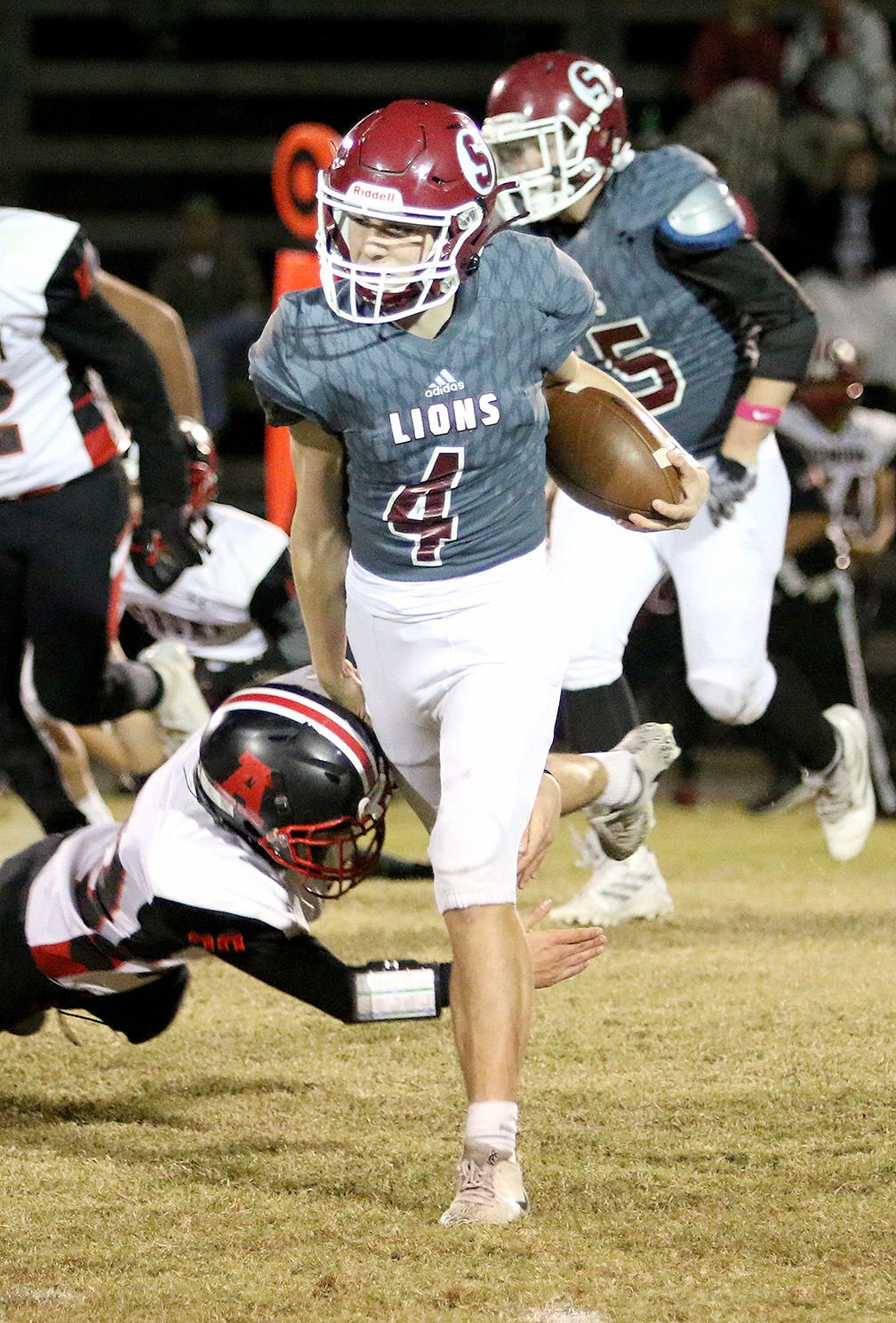 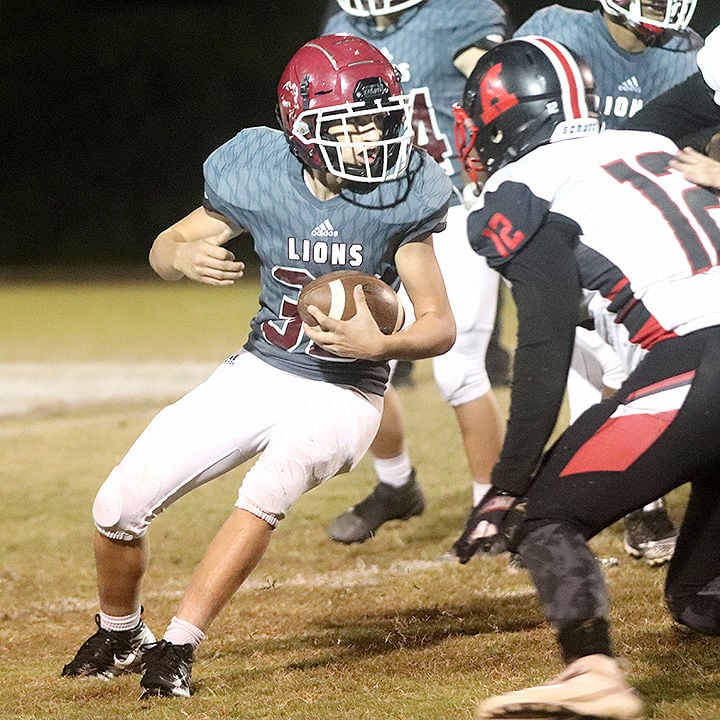 Cameron Summerford cuts back into a running lane during Section's win over Asbury Thursday night.

Cameron Summerford cuts back into a running lane during Section's win over Asbury Thursday night.

SECTION — Section head football coach Chris Hammon is a defensive guy at heart, so the point total — or lack thereof — under the visitor spot on the scoreboard made him smile.

The young Lions have had their struggles slowing up opposing offenses the past few games, and Hammon was glad to see the team’s defensive unit respond against Asbury.

“I’m a defensive guy, so giving up all those points the last few weeks hurt,” Hammon said. “But anytime you get a shutout, that means your defense played really well and you’ve got to be happy about that. Proud of the way (the defense) played. Proud of the way everybody played.”

Section (2-6, 2-4) recorded its second shutout of the season. The Lions also shut out Ider in Week 3. It’s the 10th time in program history that Section has recorded two or more shutouts in the same season.

Meanwhile, the Section offense did its part as well. The Lions churned out season-highs in points, rushing yards (340) and total yards (355) in the victory. Section scored on five of their seven possessions and never punted.

“The line did a good job of controlling the line of scrimmage and our backs ran hard,” Hammon said. “We still had too many holding penalties and things like that that you can’t do. We’ll work to fix those. Our offense got it clicking. That was good to see.”

Drake McCutchen ran for 129 yards and two touchdowns for Section and quarterback Jace Holcomb had 99 yards and two scores on 10 carries — Holcomb was 2-of-3 passing for 15 yards — while JR Walker ran for 62 yards on seven carries and Cameron Summerford had 60 yards and a touchdown on 11 carries.

Touchdown runs of 5 yards by Holcomb and 39 yards by McCutchen and the first two of Leo Viljanen’s five PATs gave Section a 14-0 lead after one quarter. McCutchen’s 1-yard touchdown run pushed the Lions’ lead to 21-0 with 3:27 left in the first half. Section had another scoring chance snuffed out with 40 seconds left until halftime when Asbury’s Koley Wood recovered a Section fumble at the Rams’ 9-yard line.

Section added to its lead quickly in the third quarter. McCutchen had carries for 23 and 28 yards that led to Holcomb’s 10-yard touchdown just over a minute into the third quarter. Six minutes later, Summerford found the end zone from 10 yards out for a 35-0 Section lead. The fourth quarter was played with a 10-minute running clock, and the Lions held the football for the entire quarter.

Asbury (1-7, 0-6), which was shutout for the third time in four against the Lions, was held to 44 total yards. Korbyn Patterson ran for 14 yards on six carries and Dante Broussard had 12 yards on eight carries while Austin Bloodworth had 17 yards on five carries and was 1-of-5 passing for 8 yards.

Section now prepares to close its season with a pair of Jackson County rivalry games. The Lions visit North Sand Mountain next week before hosting Woodville in their season finale Nov. 1.

“We’ve got some county pride to play for,” Hammon said. “We’re going to keep working and try to finish this thing out strong.”