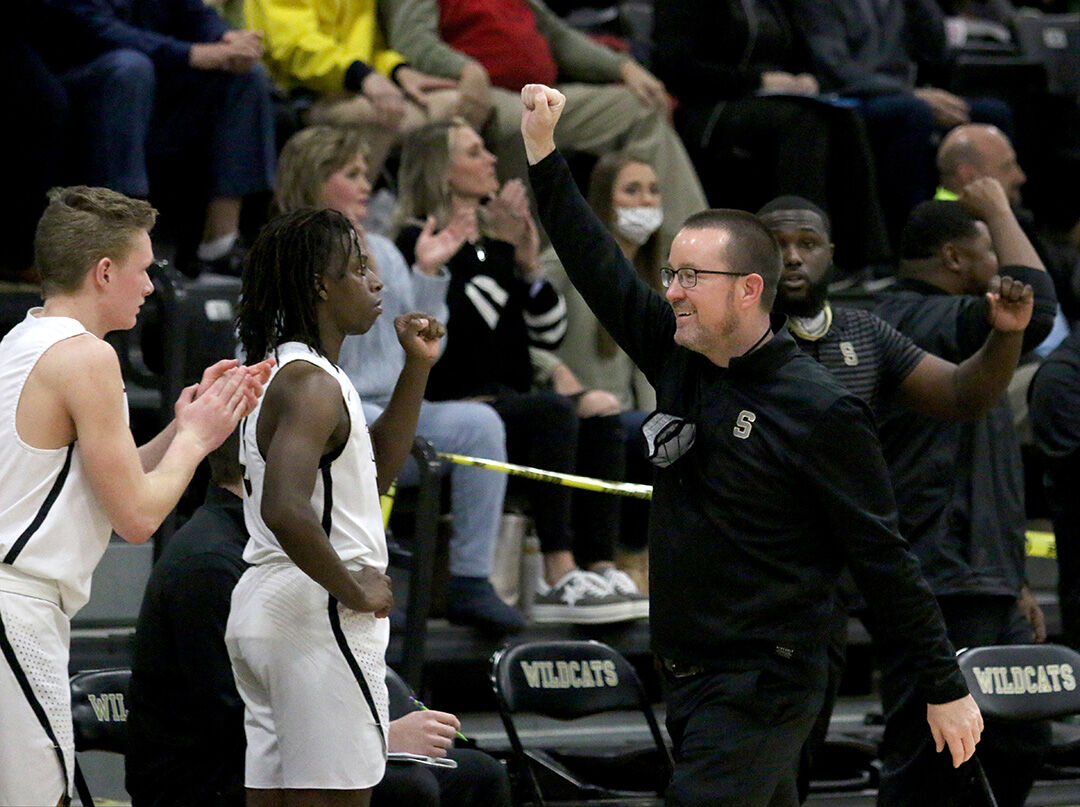 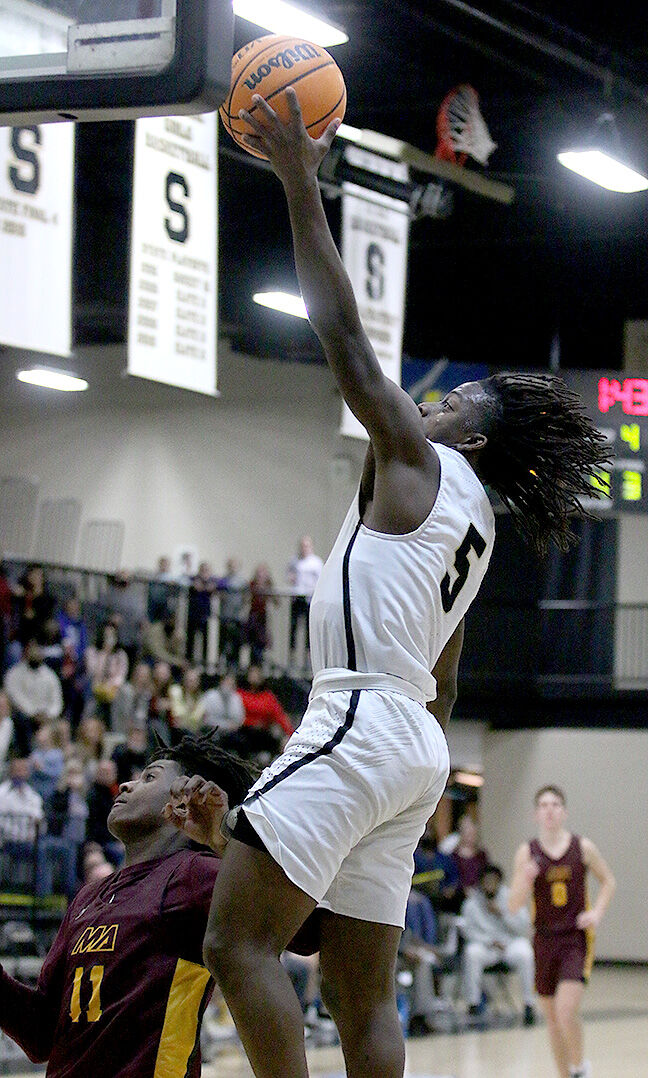 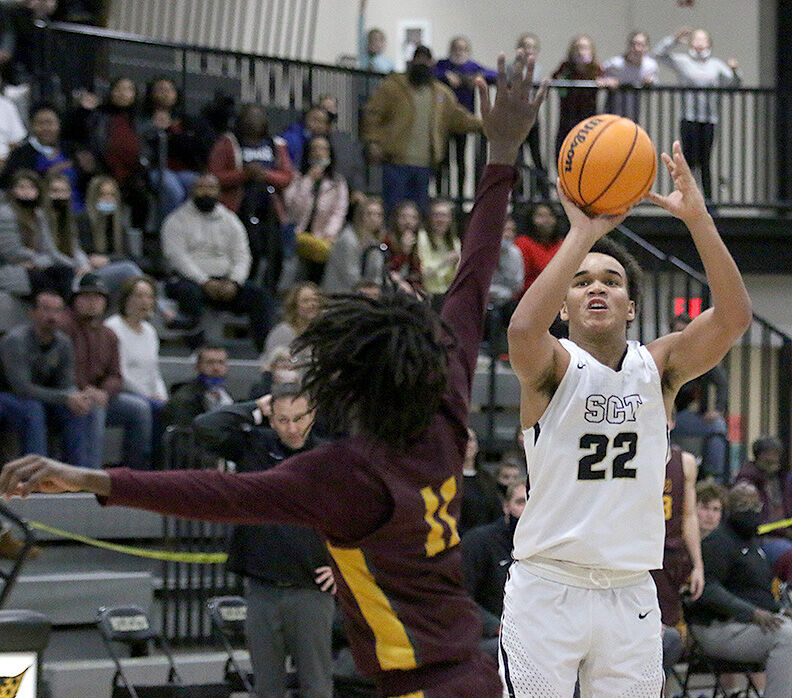 Jordan Davis (22) makes the game-tying 3-pointer to force overtime during Scottsboro’s 58-54 win in the Class 6A Northwest Sub-regionals.

Jordan Davis (22) makes the game-tying 3-pointer to force overtime during Scottsboro’s 58-54 win in the Class 6A Northwest Sub-regionals.

Scottsboro rallied from an 11-point second-half deficit to defeat visiting Madison Academy 58-54 in overtime at Hambrick Hall and advance to the Class 6A Boys Northwest Regional.

“Our kids, they never quit,” said Scottsboro head coach Jason Bell. “They’d been in that situation before and we kept reminding them…you never see a rattled look (from them). We were down at halftime and we talked about the scoreboard doesn’t mean anything until there’s a four (for the quarter number) underneath zeros (on the clock). They know that, they understand it. Everything we’ve gone through prepared us for the fourth quarter and overtime. The kids have a lot of character, a lot of confidence, a lot of belief in one another.”

Scottsboro (23-4) advanced to play at No. 7-ranked Pinson Valley (20-4) in the Class 6A Northwest Regional semifinals Friday night.

Pinson Valley, the Area 12 runner-up, advanced to the regional semifinals by winning 62-59 at No. 1 Hartselle on Wednesday. Because of COVID-19 restrictions, Northwest Regional semifinal games are being playing played on high school campuses rather than at Wallace State Community College’s Tom Drake Coliseum. Pinson Valley is hosting Friday’s game because it played on the road in sub-regional round.

The Scottsboro-Pinson Valley winner plays in the Class 6A Boys Northwest Regional championship game at Wallace State on Wednesday, Feb. 24 at 11:30 a.m.

Scottsboro’s 23 wins are the program’s most in a season since the 1976-77 Wildcats won 24 games on the way to Scottsboro’s last state tournament appearance.

It was a hard-earned win for the Wildcats.

Madison Academy’s zone defense slowed the pace as Scottsboro struggled with its outside shot. The Mustangs, meanwhile, found their shot late in the first quarter, using a 7-0 scoring run to grab a 15-11 advantage. Madison Academy then hit three second-quarter 3-pointers to help secure a 28-22 halftime advantage. The Mustangs then went in front by 11, 37-26, on Justin Bradley’s putback dunk with 2:35 left in the third quarter. But Scottsboro climbed to within 40-35 by quarter’s end after a free throw from JaVaris Branford, two free throws from Jordan Davis and 3-pointers from Tyson Sexton and Parker Bell.

Scottsboro ultimately tied the game at 48-all with 1:45 remaining on Davis’ 3-pointer. After both teams missed shots underneath the basket on their ensuing possessions, Madison Academy missed a 3-pointer as time wound down in regulation.

Scottsboro took its first lead since the first quarter on Davis’ bucket with 2:41 remaining in overtime. After Drew Blackston’s 3-point play put Madison Academy up 51-50, Scottsboro missed a shot on its ensuing possession. But BJ Harris came up with a steal near half-court and drove for the go-ahead layup with 1:32 remaining. After the Mustangs came up empty on their next possession, Sexton sank two free throws to give Scottsboro a 54-51 lead with 55.6 seconds remaining. Harris then forced another Madison Academy turnover, leading to him sinking two free throws for a 56-51 Wildcats’ advantage. After Blackston hit a 3-pointer to pull the Mustangs within two, Branford made a free throw to give Scottsboro a 57-54 lead with 16.2 seconds remaining.

“Madison Academy, coming into the game, they hadn’t been shooting the ball well. All day I was nervous about them coming out making shots and they did,” Jason Bell said. “We started trying to put a lot more pressure on them. Our kids got the ball back enough and made enough plays to sneak out a victory. We made some big shots down the stretch, made some free throws. That’s the name of the game.”

Sexton finished with 16 points for Scottsboro while Davis had 15, Harris had 14, Parker Bell had nine and Branford had four.

With the victory, Scottsboro finished undefeated at home this season, going 15-0 at Hambrick Hall.

“We haven’t talked about that, but (the players) knew we hadn’t lost at home,” Jason Bell said. “Those guys weren’t going to let that happen.”