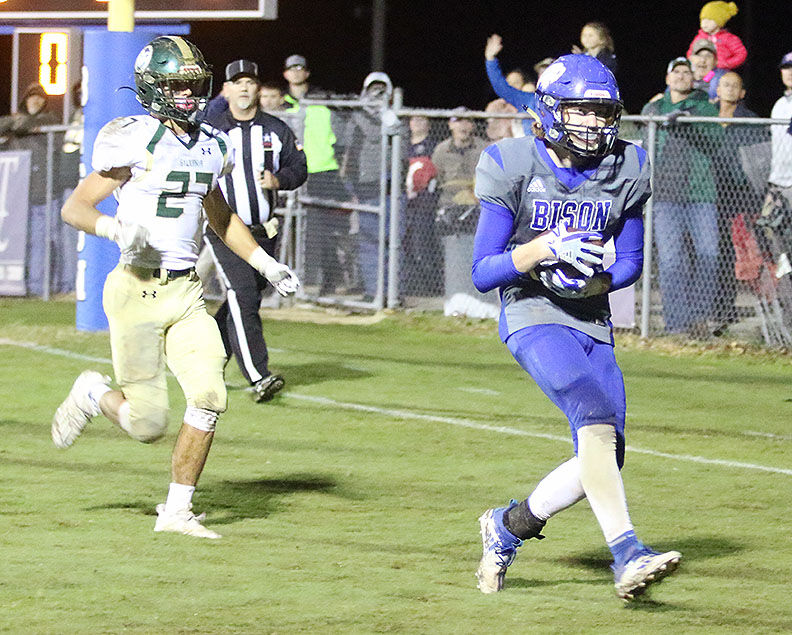 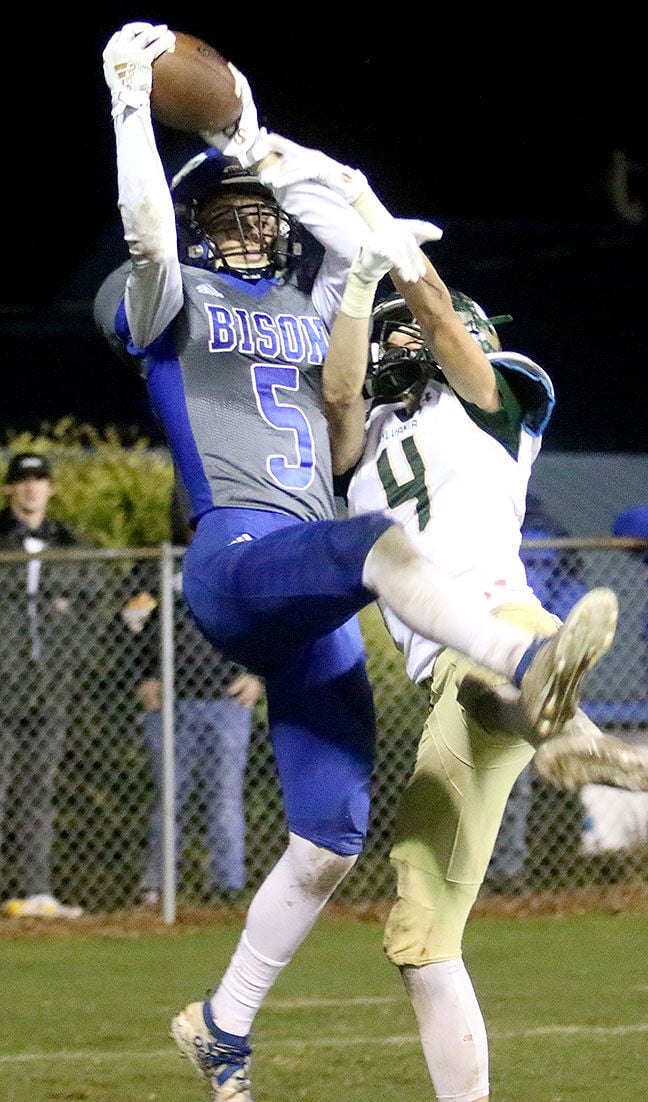 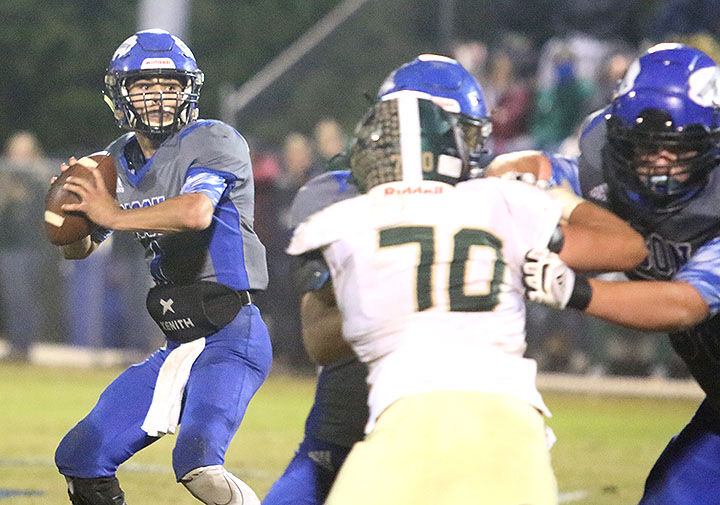 NSM quarterback Lake Bell looks for a receiver during NSM's 25-19 double-overtime win over Sylvania Friday night. The senior accounted for four touchdowns — two passing and two rushing — in the victory.

NSM quarterback Lake Bell looks for a receiver during NSM's 25-19 double-overtime win over Sylvania Friday night. The senior accounted for four touchdowns — two passing and two rushing — in the victory.

The North Sand Mountain football team’s ninth win of the season came in hair-raising fashion on the night before Halloween.

Class 2A No. 6-ranked NSM survived two scares, one at the end of regulation and one in the first overtime, to edge visiting Sylvania 25-19 in double overtime Friday night at Lloyd Dobbins Field in Higdon.

It’s just the second time in school history that NSM (9-1) has won nine games in the regular season and just the third time the Bison have won nine in a season period. The others were 2011 and 2019.

But the milestone did not come easy against playoff bound Sylvania (5-5).

Trailing 13-7, the Rams capped off a five-minute drive with a touchdown pass from running back Keenan Wilbanks to quarterback Brody Smith on the final play of regulation. But with the score tied 13-all and the Rams only needing the extra point to steal the win, Sylvania bobbled the snap and was unable to convert the busted play, sending the game into overtime.

NSM struck first in overtime on a 4-yard touchdown run from Lake Bell. Bell’s two-point attempt was stopped just short of the goal line. Sylvania’s Gareth Anderson scored on the first play of the possession, tying the game at 19-all. Once again needing the point after to win the game, the Rams’ extra point try sailed just outside the right upright to force a second overtime period.

NSM’s defense then stood up. After stuffing three straight running plays, the Bison defense forced an incompletion on fourth-and-goal from the 9-yard line. NSM took over with a chance to end it and Bell did just that. His second down strike to Mason Smith sent NSM and head coach Keith Kirby home happy.

“Our guys make plays,” said Kirby. “We tell them all the time, ‘If you’re in that position, you gotta make plays.’ We had a good call, and our guys made the play.”

Kirby said the same of his team’s big fourth down stop in the second overtime, “you have to step up when the opportunity presents itself, and we were able to do that tonight,” said Kirby.

The game was not all that exciting until Sylvania tied it at seven with 2:16 left to go in the third quarter. Bell opened the scoring in the second quarter on a 7-yard touchdown run, which turned out to be the only score of the first half.

NSM broke the tie with five minutes left to go in the game. Dustin Meeks recovered a Sylvania fumble with 9:26 left to play, and NSM capped off its four-and-a-half-minute drive with Derek Bearden hauling in a touchdown pass from Bell. NSM’s point after attempt was no good. It looked to be the game winning score, until chaos erupted at the end of regulation and the overtime periods.

“It was a playoff game type atmosphere out there,” said Kirby. “It was a good win for us, and we’re proud of the boys for fighting the whole game. We were trying to build momentum by having a good football team come in here tonight, and we just got the job done.”

On defense, NSM got fumble recoveries from Jorge Luna and Meeks while Blake Blevins had an interception.

NSM, the Class 2A Region 7 champion, hosts 2A Region 6 No. 4-seed Southeastern in the opening round of the state playoffs next week.