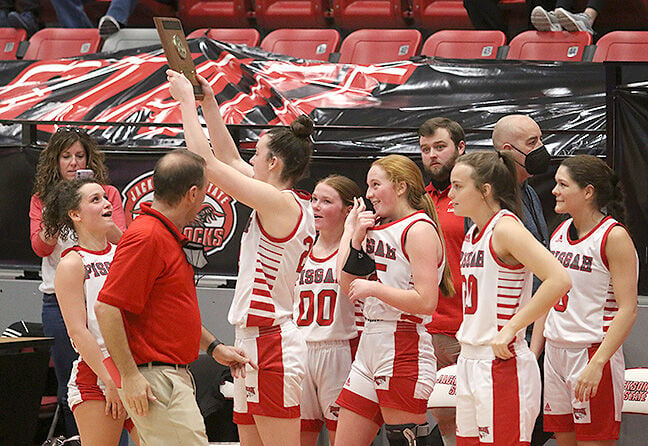 Kallie Tinker sinks a 3-pointer with 18.7 seconds left to force overtime during No. 2-ranked Pisgah's 72-65 overtime win over No. 1 Spring Garden in the Class 2A Northeast Regional championship game. 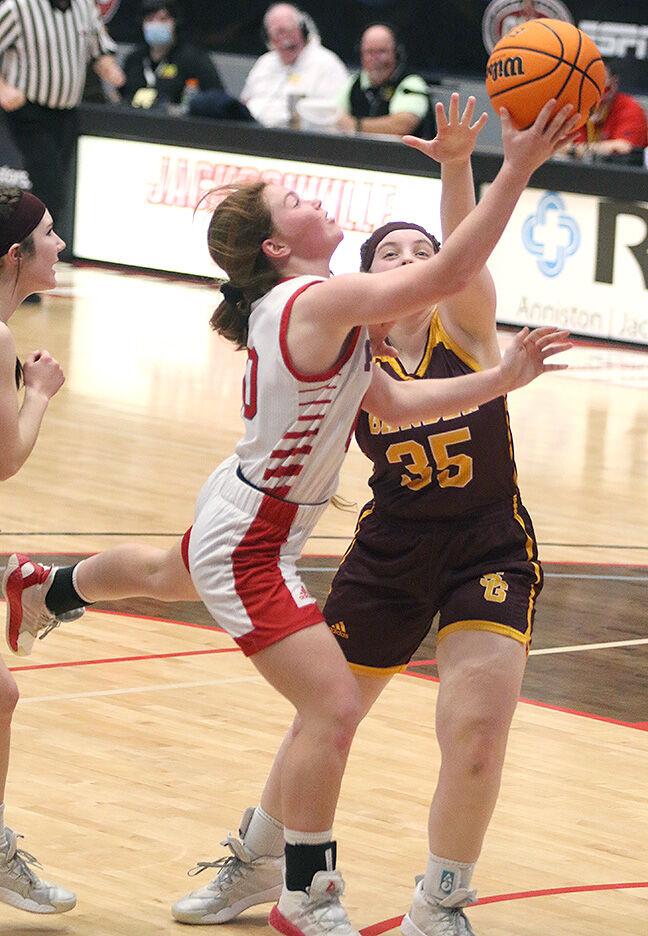 Bella Bobo scores a transition layup to give Pisgah a six-point lead in overtime during No. 2-ranked Pisgah's 72-65 overtime win over No. 1 Spring Garden in the Class 2A Northeast Regional championship game. 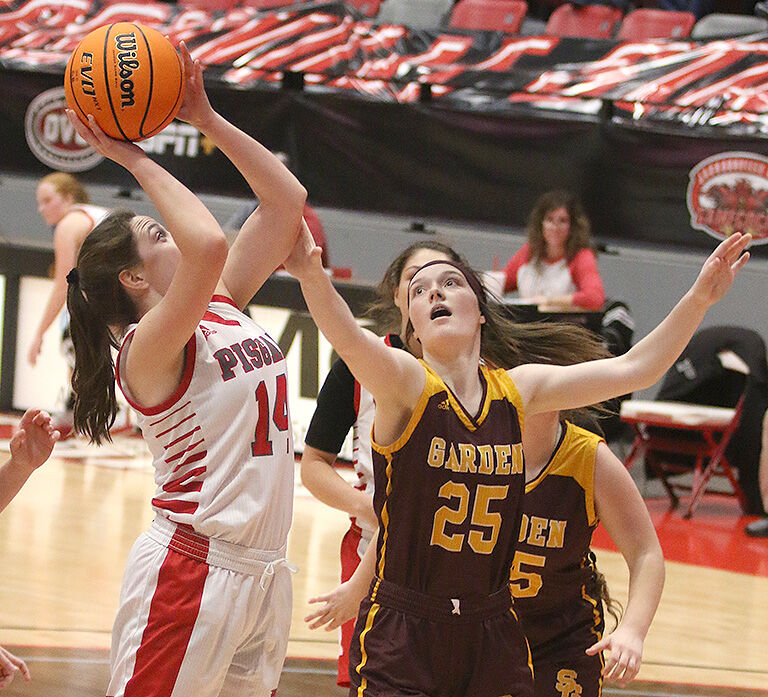 Pisgah's Emma Ellison scores two of her 10 points off the bench during No. 2-ranked Pisgah's 72-65 overtime win over No. 1 Spring Garden in the Class 2A Northeast Regional. 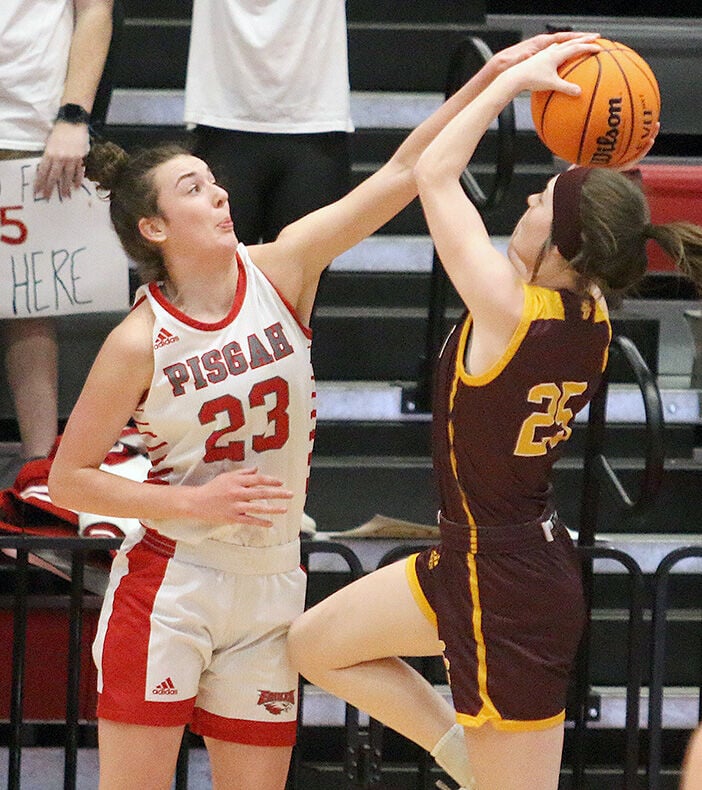 Kallie Tinker sinks a 3-pointer with 18.7 seconds left to force overtime during No. 2-ranked Pisgah's 72-65 overtime win over No. 1 Spring Garden in the Class 2A Northeast Regional championship game.

Bella Bobo scores a transition layup to give Pisgah a six-point lead in overtime during No. 2-ranked Pisgah's 72-65 overtime win over No. 1 Spring Garden in the Class 2A Northeast Regional championship game.

Pisgah's Emma Ellison scores two of her 10 points off the bench during No. 2-ranked Pisgah's 72-65 overtime win over No. 1 Spring Garden in the Class 2A Northeast Regional.

Missed shots, allowing offensive rebounds and a few key turnovers had all lead to No. 2-ranked Pisgah facing three-point deficit to No. 1 Spring Garden with less than 30 seconds remaining.

But when Kallie Tinker’s tying 3-pointer swished the net with 18.7 seconds remaining, everything changed for the Eagles.

“I think we got shook a little bit at the end of regulation, but then Kallie’s big 3 kind of set the tone, like it was destiny,” Ellison said. “We were in trouble. When she made it, it was like ‘we’re supposed to win this.’ There was a calmness suddenly. It’s hard to describe, but all of the sudden, everyone had a different look about them. It was like ‘OK, we survived, now let’s go get them.’”

It was Pisgah’s 14th all-time regional title and the 13th during Ellison’s 25-year tenure. Pisgah has won five straight regional titles and six in the last seven seasons.

Pisgah (23-6), which is pursuing a fourth straight state title after winning the previous three in Class 3A, plays the Southwest Regional champion, either St. Luke’s or Luverne, in the Class 2A Final Four at the Birmingham Crossplex’s Bill Harris Arena on Wednesday at 2 p.m.

The Class 2A Northeast Regional final featured the two most successful teams in the regional’s history, as Pisgah and Spring Garden have now combined for 26 titles and 41 appearances. It was their first meeting regional meeting ever — Spring Garden moved to 2A this season for the first time in school history while Pisgah dropped to 2A after a long stint in 3A — and “it was exactly what it was billed to be,” Ellison said.

The game was tied 18-all after one quarter — Spring Garden finished the quarter on a 7-0 scoring run — before Pisgah claimed a 34-28 halftime lead when Molly Heard banked in a buzzer-beating 3-pointer. The momentum swung the Panthers’ way in the third quarter, however, as they outscored Pisgah  17-9 to carry a 45-43 lead into the fourth.

Spring Garden (32-3), which had won three of the last four Class 1A state titles prior to this season, held a 55-54 lead with 47 seconds left when Ace Austin missed the front end of a 1-and-1 free-throw opportunity. But Pisgah couldn’t secure the rebound, and Austin ended up with the basketball and was fouled again 10 seconds later, draining both foul shots to give Spring Garden a 57-54 lead.

But on its next possession, Pisgah worked its offense until getting Tinker, who was 5-of-7 from the 3-point arc, free for the game-tying trey.

“(Spring Garden) bumped through the second screen, we kind of got lost, but somehow in the midst, they lost Kallie,” Ellison said. “It was just a huge, huge shot.”

“We came out of the huddle, ‘no 3s, no 3s, absolutely no 3s…we didn’t get the help (defensively) and Tinker made a big shot like she did all night long. She made a big play in a big moment,” Austin said. “I felt good right there, if we can just get them to miss, we (could) finish this. But when it went into overtime, I was real worried, because it seemed like it ignited (Pisgah). In situations like that, it’s hard to get a team that lost the lead to come back with a 0-0 mentality.”

Spring Garden committed a turnover on the first possession of overtime, and Barron sank a free throw on Pisgah’s ensuing possession to give the Eagles the lead. After the Panthers missed a pair of free throws, Karlee Holcomb swished a 3-pointer to give Pisgah a 61-57 advantage with 2:59 remaining. Spring Garden then missed a 3-pointer and a putback try, and Pisgah’s Bella Bobo scored a transition layup while drawing the foul with 2:30 remaining.

After that, all that was left for Pisgah to do to secure another trip to state was make free throws. The Eagles did so, knocking down 9 of 10 foul shots over the final 1:02.

“We were just calm (at the free-throw line), got in our routine,” said Bobo, who made all four of her last-minute foul shots.

Tinker finished with a team-high 20 points for Pisgah to go with three rebounds and two assists. Heard nearly had a triple-double for the Eagles, totaling 18 points, 10 rebounds, seven assists and three blocks while Bobo added 12 points and two assists, Holcomb had eight points and three rebounds and Barron had four points and seven rebounds. Pisgah also got a huge game from reserve Emma Ellison, who scored 10 points — including four important fourth-quarter baskets — and grabbed five rebounds in eight minutes of action total.

“Biggest game of her two-year career,” said Carey Ellison. “Didn’t play until she was a junior, played JV last year. I knew it was in there. She works so hard. She finishes at practice more often that she’s been finishing in games. She hit one, confidence grew. That little high-low (play) with Molly and Emma was a gamechanger. Just another huge (part) of the game. Emma came in and did a great job.”