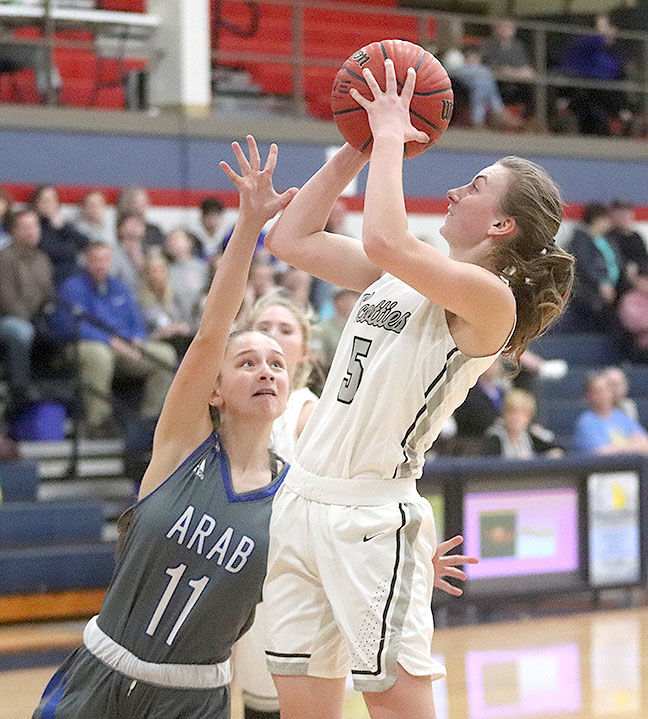 Carley Bell shoots for two of her 23 points during Scottsboro's 50-36 Class 5A Area 15 Tournament win over Arab. 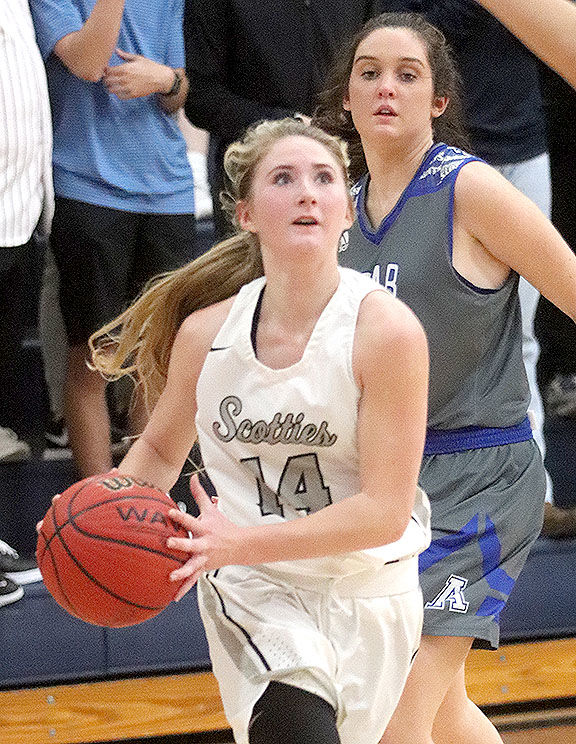 Lexi Bennett drives to the goal for a fourth-quarter basket during Scottsboro's 50-36 win over Arab in the Class 5A Area 15 Tournament semifinals. 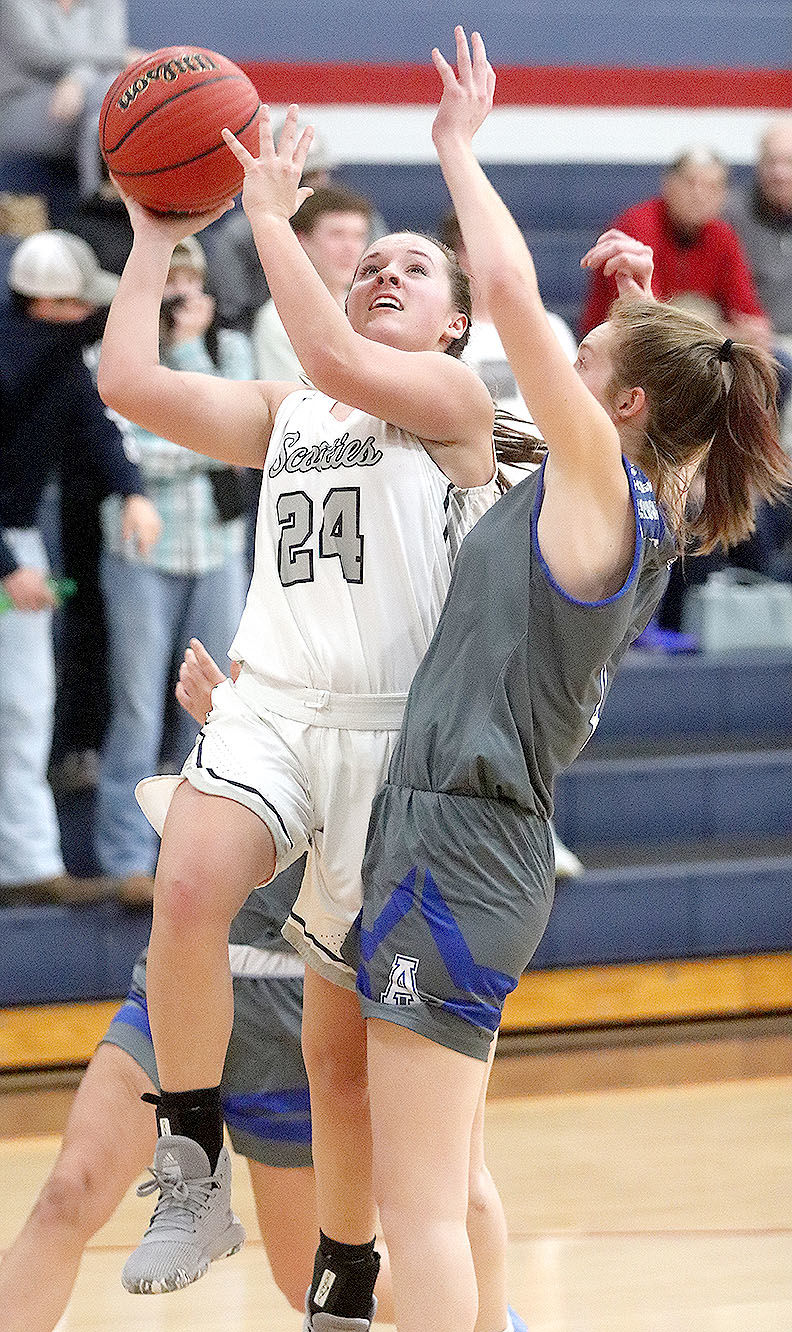 Madison Holland goes up for a layup during Scottsboro's 50-36 Class 5A Area 15 Tournament win over Arab.

Carley Bell shoots for two of her 23 points during Scottsboro's 50-36 Class 5A Area 15 Tournament win over Arab.

Lexi Bennett drives to the goal for a fourth-quarter basket during Scottsboro's 50-36 win over Arab in the Class 5A Area 15 Tournament semifinals.

Madison Holland goes up for a layup during Scottsboro's 50-36 Class 5A Area 15 Tournament win over Arab.

The second-seeded Scottsboro varsity girls basketball team had seen a double-digit lead against third-seeded Arab, which had momentum on its side, shrink to three points late in the third quarter.

Lexie Bennett, however, ended Scottsboro’s scoring drought in the final seconds of the quarter with a bucket that banked in high off the glass. Turns out, it was a momentum-changing basket.

Scottsboro followed Bennett’s basket with an 11-0 run to start the fourth quarter while holding Arab scoreless for the first 4:43 of the final quarter to secure a 50-36 win in the Class 5A Area 15 Tournament semifinals Monday night at Brewer High School in Florette.

“We were stagnant, couldn’t get anything going, and (Bennett) hit a big floater before the third-quarter buzzer. It just kind of lifted us,” said Scottsboro head coach Brandon Childers. “We just played off that. Audrey (Holland) had a big steal after that, (Arab) had some turnovers and we jumped up about 10 (points) and slow-played it after that.”

Scottsboro (13-14) played itself into a matchup with the top-seed and tournament host Brewer in the Class 5A Girls Area 15 Tournament championship game tonight at 7 p.m. in Florette. Brewer defeated fourth-seeded Guntersville 49-29 in Monday’s other semifinal game.

“Getting through that first game (in the area tournament) is big,” Childers said. “Whatever happens (in the area finals), you’ve got a shot (to advance to regionals).”

It’s the fourth straight season Scottsboro has advanced to the sub-regional round.

Scottsboro did so this season by defeating Arab for the third time this season and the 10 straight time overall.

The Wildcats raced out to a 15-8 lead after one quarter and led 21-8 early in the second after Carley Bell’s 3-pointer. But foul trouble interrupted Scottsboro’s momentum, and Arab pulled within 26-20 at halftime. The Knights chipped away at Scottsboro’s lead throughout the third quarter, getting as close as two after a 3-pointer from Aspen Miller. After Bell hit two free throws for the Wildcats, Arab got a free throw from Aubrie Kennamer with 1:51 left in the third. But the Knights didn’t score again in the frame, and after Bennett gave Scottsboro a 35-30 lead entering the fourth, Scottsboro got baskets from Bennett, Allie Scott and Bell, free throws from Bell, Bennett and Holland and another basket from Bell to take a 46-30 lead with 3:28 remaining. Arab never got closer than 13 the rest of the way.

“We started out aggressive, playing fast like we wanted to early. Then we got in foul trouble, got stagnate and let them back in it,” Childers said. “But I was proud of the way we responded. Down the stretch we hit some big baskets, stretched it out and made them foul us.”

Bell finished with a game-high 23 points for Scottsboro while fellow senior Madison Holland netted 10. The Wildcats also got six from Bennett, five from Audrey Holland and four from Scott.

Tristan White scored a team-high 16 points for Arab (5-21), which suffered a season-ending loss to Scottsboro for the third straight season.