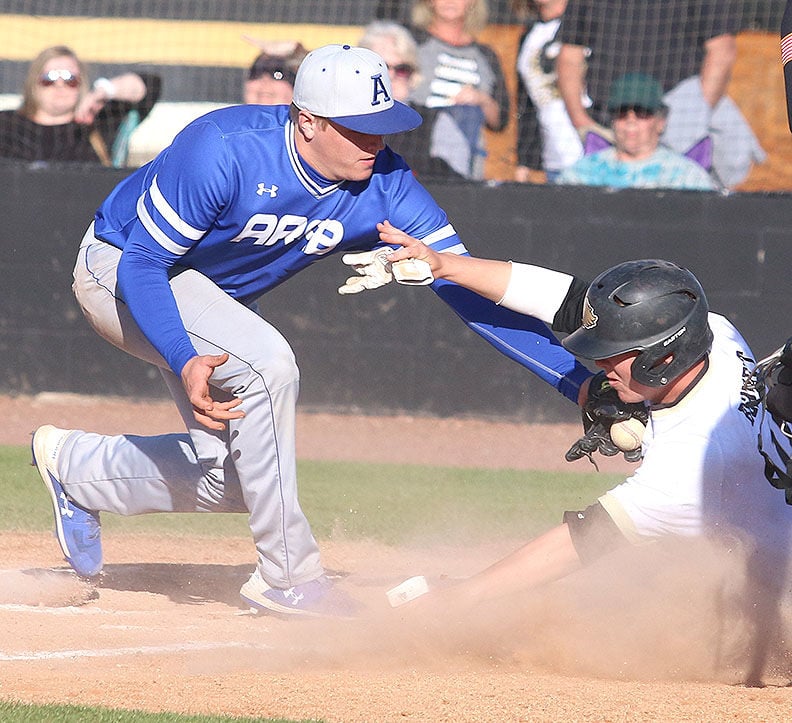 Riley Bennett slides in under the tag to score a run in Scottsboro's 11-1 Class 5A Area 15 win over Arab. 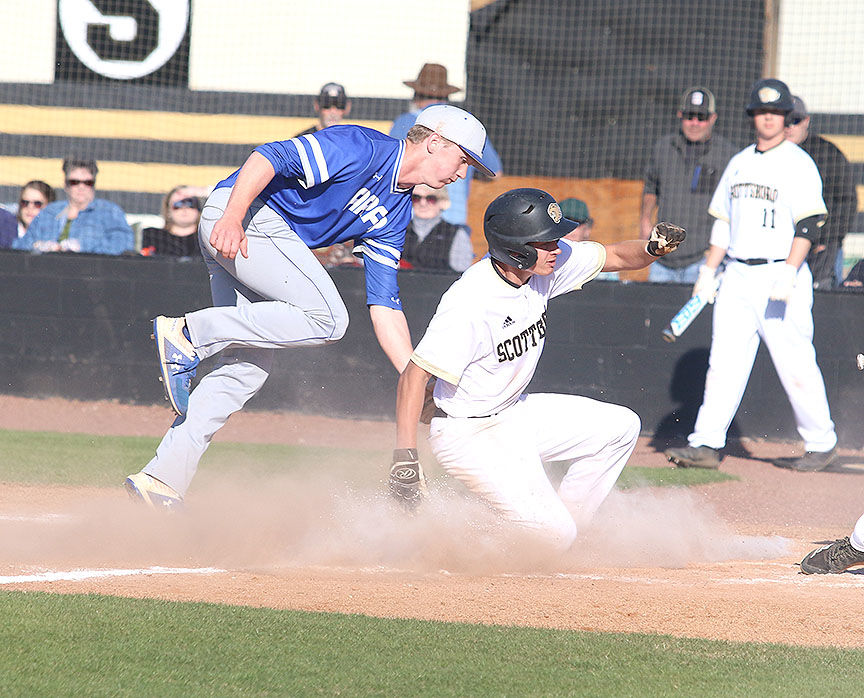 Reed Latimer slides in safely to score a run on a wild pitch during Scottsboro's 11-1 Class 5A Area 15 win over Arab.

Riley Bennett slides in under the tag to score a run in Scottsboro's 11-1 Class 5A Area 15 win over Arab.

Reed Latimer slides in safely to score a run on a wild pitch during Scottsboro's 11-1 Class 5A Area 15 win over Arab.

The Scottsboro baseball team took Game 1 of an important Class 5A Area 15 series on Tuesday.

The Wildcats scored nine runs in the third inning and went on for a mercy-rule shortened 11-1 win over visiting Arab.

“Good momentum booster for our guys.  They were really excited for this game,” said Scottsboro head coach Blake Talley. “To come out and get a win is huge for us, but (Arab) is going to come out Thursday and fight. It’s one game, but we’ve still got more we’ve got to take care of. I’m happy but I’m not satisfied.”

Scottsboro (12-6) improved to 3-0 in area play and concludes the series, weather permitting, today at Arab City Park. With a win in Game 2, Scottsboro would clinch the area championship because it would hold any tiebreakers over Arab and Guntersville while Brewer, which Scottsboro plays next week, already has three area losses.

Riley Bennett’s homer to left — the first home run of his career — put Scottsboro in front 1-0 in the second. Arab tied the game in the third with an unearned run before it imploded defensively in the bottom of the third Scottsboro scored nine runs during an inning in which Arab committed four errors, two passed balls that plated Scottsboro runs while its pitchers issued three hits, four walks and hit two batters.

“Our guys did a good job of taking pitches, making their pitchers work,” Talley said. “Their (starting) pitcher was very good, threw in the mid- to upper-80s. We made him work, stuck to our approach, and when he started struggling, we pounced, and that’s what we’re supposed to do.”

Ethan Clark scored the game-ending run in the bottom of the fifth on Christian Herberholz’s sacrifice fly.

Reed Latimer finished 2-for-3 for Scottsboro while Clark, Peyton Grant, Herberholz, Bennett and Kyle Murphy had one hit each.

Herberholz pitched a two-hitter for the Wildcats, finishing with six strikeouts while walking two batters.

“Christian was sick late last week. I didn’t know if he’d be able to throw today, but he said he was fine,” Talley said.

“He labored at times, didn’t look as crisp as he usually does, but the thing about Christian is he’s going to compete. We got up, and he just kept pounding the zone.”

North Jackson 11, DAR 4 — At Grant, visiting No. 3-ranked North Jackson scored seven runs over the final three innings to win the Game 1 of the teams’ Class 4A Area 14 series.

North Jackson (16-4, 1-0) led 4-3 after three innings before scoring three runs in the fifth and sixth innings and one in the seventh.

John Matthews pitched a complete game for the Chiefs. The senior left-hander recorded 10 strikeouts while allowing four runs (two earned) on four hits and two walks. Jarett Mason and Austin Sanderson had one RBI each for DAR (9-8, 1-2).

Section 6, NSM 5 — At Section, the Lions scored three runs in the bottom of the seventh inning to edge North Sand Mountain in Game 1 of their Class 2A Area 16 series.

Trevier Porter singled home Jonathan Carroll to pull Section (7-6, 3-0) within 5-4 before Jacob Gentry scored the tying run on a balk. Porter then scored the winning run on a wild pitch.

Porter went 3-for-4 with three RBIs while Taylor Payne had an RBI triple, Blake Henry, Wiley McCutchen and Carroll had one hit each.

Gentry pitched the final 2/3 innings for Section and got the win. Payne pitched 6 1/3 innings and recorded 11 strikeouts.

Gaylesville 14, Woodville 1 — At Gaylesville, visiting Woodville dropped the opener of a Class 1A Area 15 series.

Josh Drawbraugh, Jacob Chambers and Camron Talley had one hit each for Woodville (0-10, 0-2).

Tyler Bentheimer, Blaine Kuykendall and DJ Lee had two RBIs each for Gaylesville (7-8, 3-0), which clinched the area championship.

Geraldine 9, Pisgah 0 — At Geraldine, the Eagles dropped the opener of a Class 3A Area 15 series with the Bulldogs.

Peyton Mooney pitched a two-hitter with 14 strikeouts for Geraldine (6-10, 3-2) while Will Rodgers, Levi Martin and Miles Benton drove in two runs each.