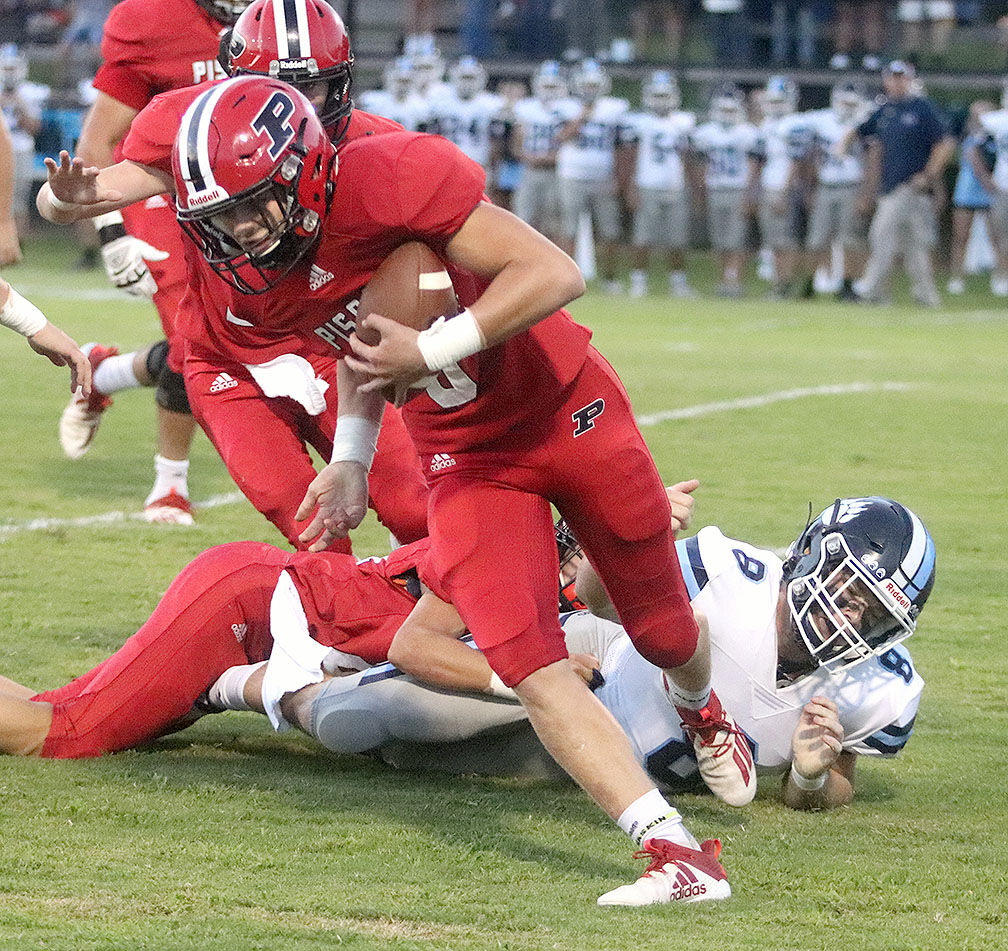 Mason Holcomb returns a fumble he snagged out of mid-air against Plainview.

Mason Holcomb returns a fumble he snagged out of mid-air against Plainview.

After an early 7-0 lead, a young Pisgah football team Eagles fell behind 30-7 at halftime to visiting Plainview Friday night.

But the Eagles did not fold.

Head coach Luke Pruitt said he was proud of his team, who kept fighting in the second half before falling 50-28 and having its two-game winning streak against Plainview, Pruitt’s alma mater, snapped.

“We got better tonight despite the loss,” said Pruitt. “Our kids kept playing. We’re going to get better.”

Plainview (2-0) used a rugged running game, rushing for 427 yards. Still, they found themselves down early. Late in the first quarter, Parker Law took a reverse handoff and then threw to sophomore Levi Arnold for a 56-yard touchdown. John Burke kicked the PAT to give Pisgah (0-2) a 7-0 lead.

The Bears responded in the second quarter, scoring four times to push the lead to 30-7. Quarterback Noah White got the first score, keeping on the option and racing 61 yards. The PAT failed leaving Pisgah ahead 7-6 with 10:35 left in the half.

The lead didn’t last long as Marcos Vega busted loose for a 39-yard touchdown run, followed by a 71-yard run by Jathan Underwood to push the lead to 22-7.

The Bears added another score right before the half when White connected with Andrew Hall for a 57-yard touchdown with :2.9 left in the half. McCurdy’s two-point run made it 30-7.

Pisgah fought back in the third quarter. Freshman Mason Holcomb picked off a Plainview pass and returned it 55 yards to the Plainview 15. Three plays later, Holcomb connected with Law for a 19-yard touchdown. Burke’s PAT cut it to 30-14.

The Bears answered back when McCurdy capped a nine-play, 66-yard drive with a 36-yard touchdown run, pushing the lead to 37-14. Plainview looked to put the game away late in the third quarter, but Law stepped in front of an option pitch and raced 50 yards for a touchdown.

Pisgah got closer late in the fourth quarter when Holcomb connected with freshman Grant Smith for a 40-yard touchdown. Burke made the PAT, cutting it to 37-28 with 10:25 left.

Plainview managed to put the game away from there, though. Vega scored two touchdowns, on runs of 28 yards and 16 yards, to give the Bears a 50-28 win.

White finished 2-of-5 passing for 72 yards with a touchdown and an interception.

For Pisgah, Law accounted for three touchdowns, including one on defense. Holcomb finished 7-of-13 passing for 103 yards with a touchdown and an interception. Smith caught two passes for 56 yards and a touchdown, while Law caught three passes for 39 yards and a score.