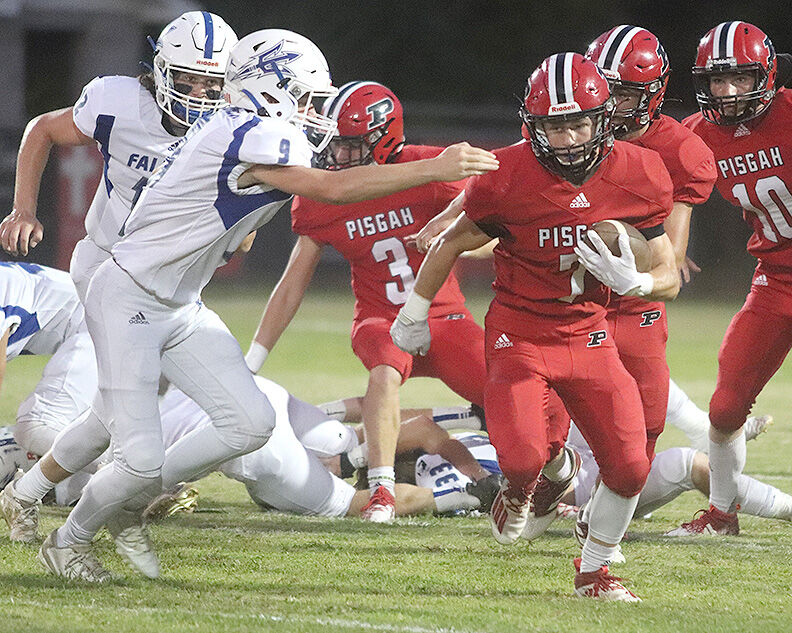 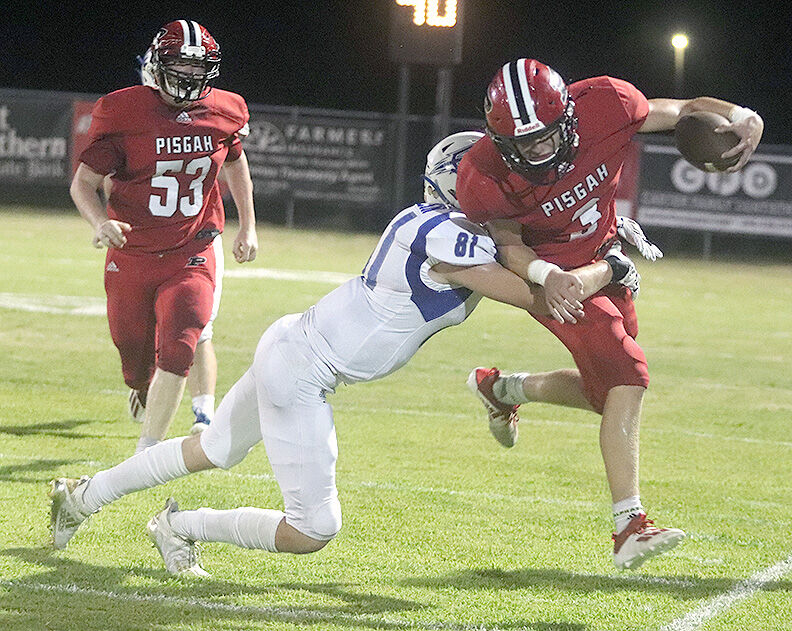 Mason Holcomb tries to break away from a Falkville defender during the teams' Class 2A Region 7 contest.

Mason Holcomb tries to break away from a Falkville defender during the teams' Class 2A Region 7 contest.

The day will come when Pisgah’s youngsters grow up and get some revenge. Head coach Luke Pruitt won’t make excuses, but the facts are his team starts four freshmen and one eighth-grader on offense and three freshmen in the secondary.

“This is let down after last week,” said Pruitt. “It’s on me, we just have to do a better job.”

Spoiling Pisgah’s homecoming, Falkville rolled up 423 total yards of offense behind Christian Angulo, who had 178 yards and scored five touchdowns on 11 carries.

Falkville jumped out to a 27-0 first half lead before the Eagles got on the scoreboard. Late in the first half, the Eagles drove 75 yards for the score. The key play was a 40-yard pass from Parker Law to freshman Grant Smith. On fourth down from the Falkville five-yard line, freshman quarterback Mason Holcomb connected with Law for a touchdown. John Burke kicked the PAT to cut the lead to 27-7 with :43 left in the half.

Falkville added another score before halftime after Angulo caught a 34-yard pass to the Pisgah 12. From there, Jordan Greenfield kicked a 29-yard field goal to make it 30-7 at halftime.

The Eagles put together a drive following the Falkville score as Law connected with Grant Smith for 35 yards. Pisgah drove inside the Falkville five-yard line but came up short on fourth down.

Three plays later, Falkville quarterback Peyton Sallee connected with Andrew Jones for a 71-yard touchdown at the end of the quarter.

Pisgah finished strong, driving 55 yards in 11 plays. Holcomb completed four-of-five passes in the drive, including an 18-yard score to Law, ending the game at 53-14.

For Pisgah, Holcomb completed 8-of-14 passes for 53 yards and two touchdowns with one interception. He also rushed for 48 yards on 17 carries.

Pisgah finished the game with 194 total yards on 52 plays, including only 66 yards rushing.

Falkville finished with 432 total yards on 50 plays, including 269 yards rushing. Sallee completed 8-of-12 passes for 154 yards and two scores.