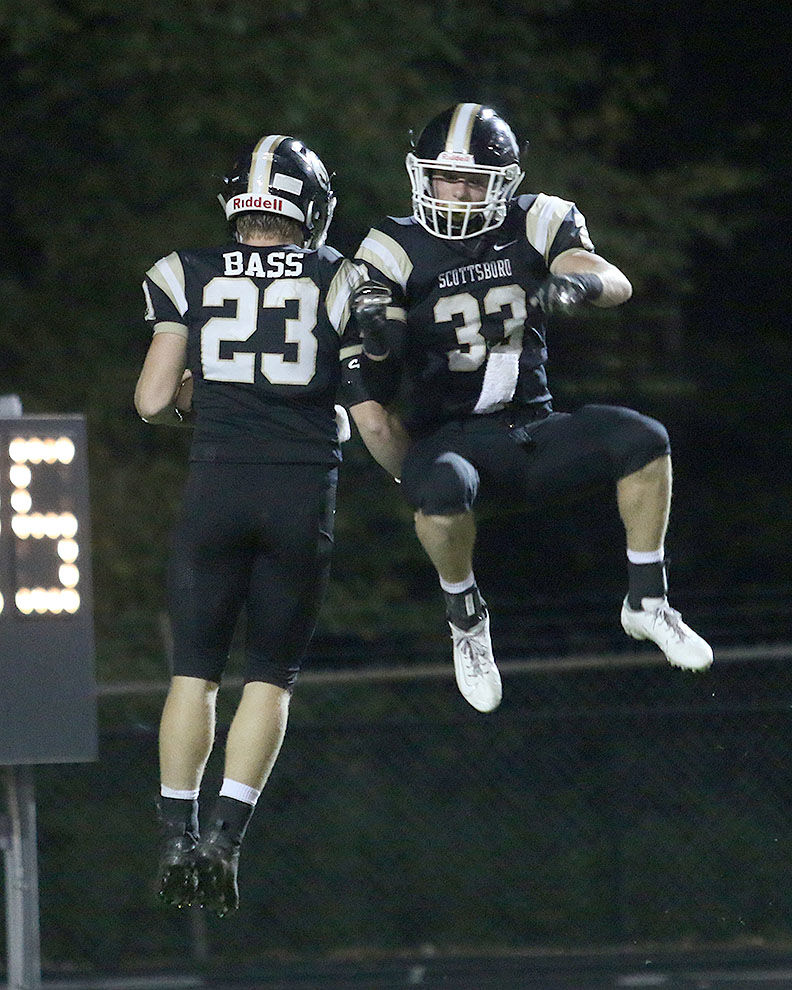 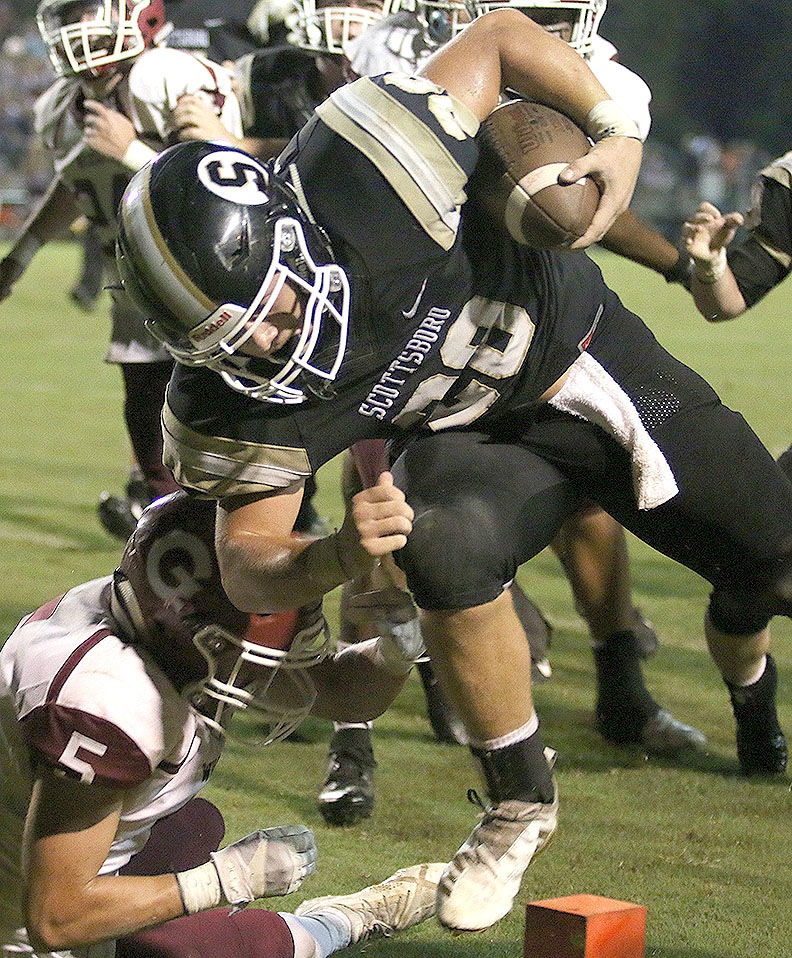 Jacob Manning leaps over a Guntersville defender to cross the goal line and score one of his four touchdowns during Scottsboro's 42-14 Class 5A Region 8 win at Trammell Stadium. 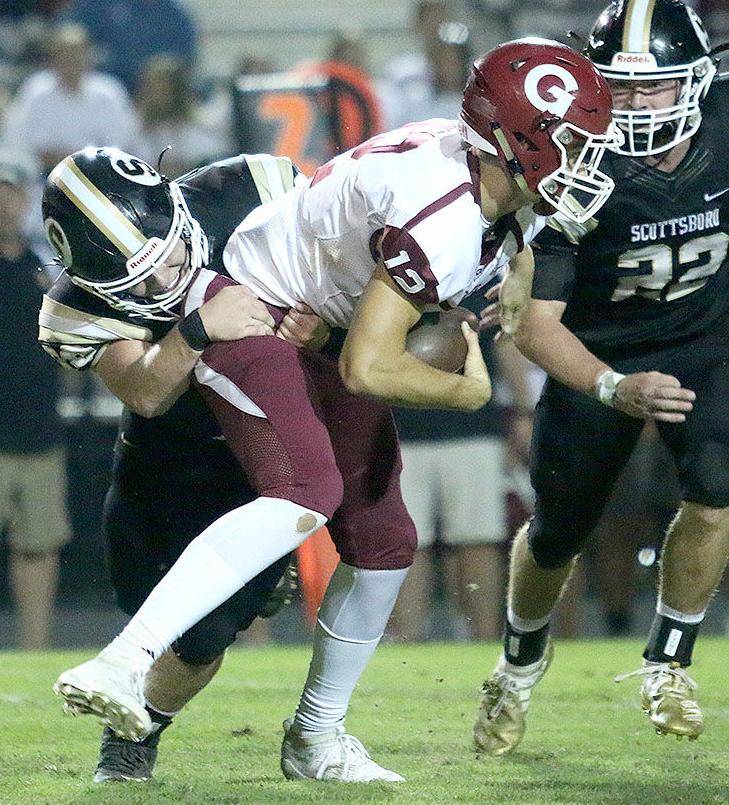 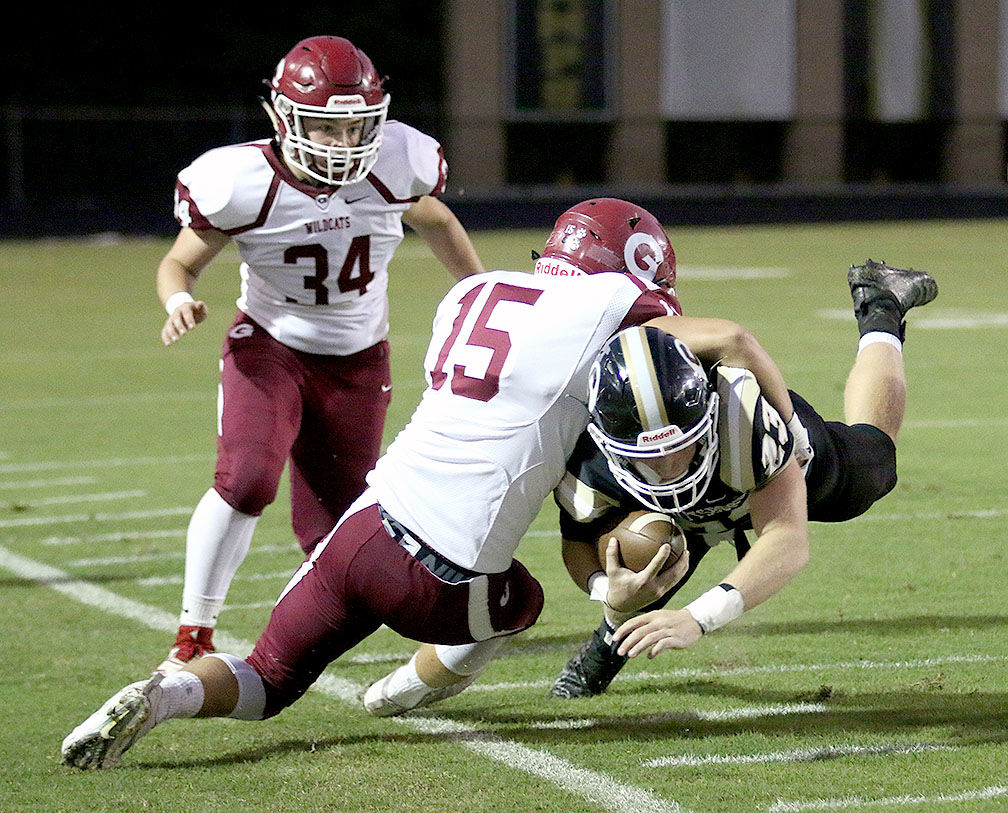 Cam Ellis Bass dives through a Guntersville defender for extra yardage to end a run during Scottsboro's 42-14 Class 5A Region 8 win Friday night.

Jacob Manning leaps over a Guntersville defender to cross the goal line and score one of his four touchdowns during Scottsboro's 42-14 Class 5A Region 8 win at Trammell Stadium.

Cam Ellis Bass dives through a Guntersville defender for extra yardage to end a run during Scottsboro's 42-14 Class 5A Region 8 win Friday night.

SCOTTSBORO — The Scottsboro football team believed it had the more physical team going into Friday’s Class 5A Region 8 matchup with rival Guntersville.

The scoreboard and the stat sheet backed up that belief.

Scottsboro rushed for 374 yards while shutting down a Guntersville offense averaging 38.5 points per game en route to a 42-14 region victory at Trammell Stadium.

The win snapped Scottsboro’s two-game losing streak in the long-running series (86 meetings) and kept the Wildcats atop the region standings, where they are tied with Madison Academy entering Week 4.

“We felt like we had the more physical team and we were going to try to prove it,” said Scottsboro head coach Don Jacobs, who is now just two wins shy of 100 career victories. “We let the offensive line take over. The line knew they were wearing them out. They did a great job. You can’t say enough about what they did tonight because they physically manhandled them up front.”

Quarterback Jacob Manning rushed for 187 yards and four touchdowns on 28 carries for Scottsboro (2-1, 2-0) while running back Cam Ellis Bass added 140 yards and two touchdowns on 15 carries. Manning also passed for 27 yards, pushing Scottsboro over the 400 total yard mark for the second straight week.

But it was all Scottsboro from there. The Wildcats produced scoring drives of 16 plays for 82 yards and 12 plays for 59 yards to take a 14-7 halftime lead on touchdown runs of 4 and 2 yards from Manning and the first two of Mees deYoung’s six PATs.

Scottsboro opened the second half with Kaylem Dupree’s 56-yard kickoff return, and Bass scored from 33 yards out on the next play to put the Wildcats in front 21-7. Scottsboro pushed its lead to 28-7 late in the third quarter when Manning scored from 8 yards out to cap another 12-play drive that covered 91 yards. The Wildcats then got a 13-yard touchdown run from Manning and 1-yard touchdown run from Bass — the senior set it up with a 42-yard run on the previous play — to take a 42-7 lead.

Guntersville, which had just 111 total yards until its final drive, managed an 11-play, 80-yard scoring drive — Campbell Leach caught an 11-yard touchdown pass with 1:14 remaining — on its final possession.

Burnett was 12-of-26 passing for 145 yards. Logan Pate was Guntersville’s leading rusher with 62 yards, with 41 coming on Guntersville’s final possession.

“(Guntersville’s) offense is scary, now,” Jacobs said. “I’m so proud of (our) defense. Can’t say enough about the defense. We had sacks, we had batted (passes). We had an interception (by Brandon Cloud) down there when (Guntersville) was down there deep (in Scottsboro territory). They played their hearts out.”