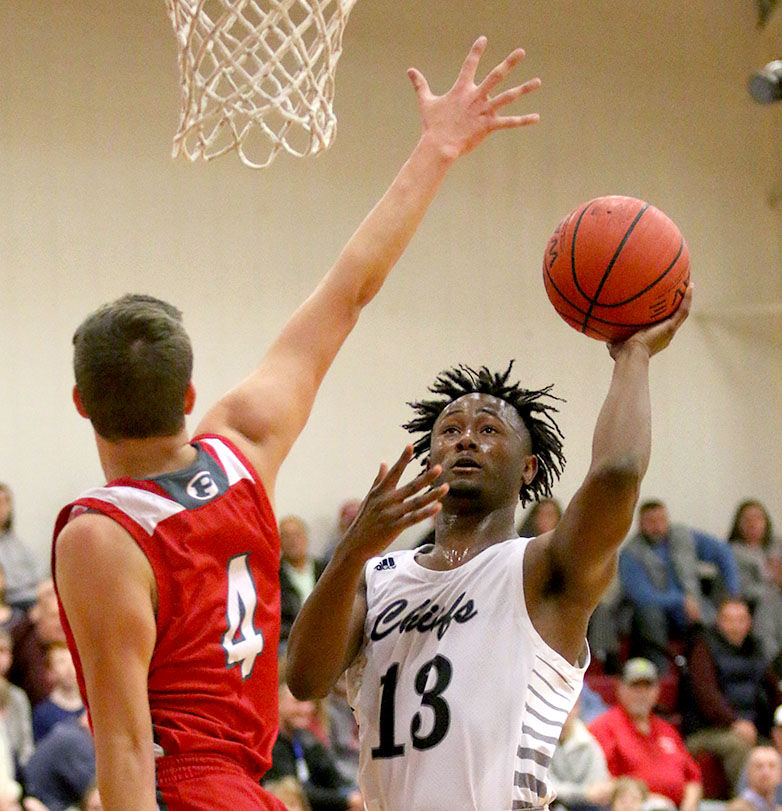 Tyrus Jackson shoots over the outstretched hand of Pisgah's Austin Brunk for a basket with 40 seconds left during North Jackson's 63-57 come-from-behind win in the Jackson County Tournament quarterfinals. 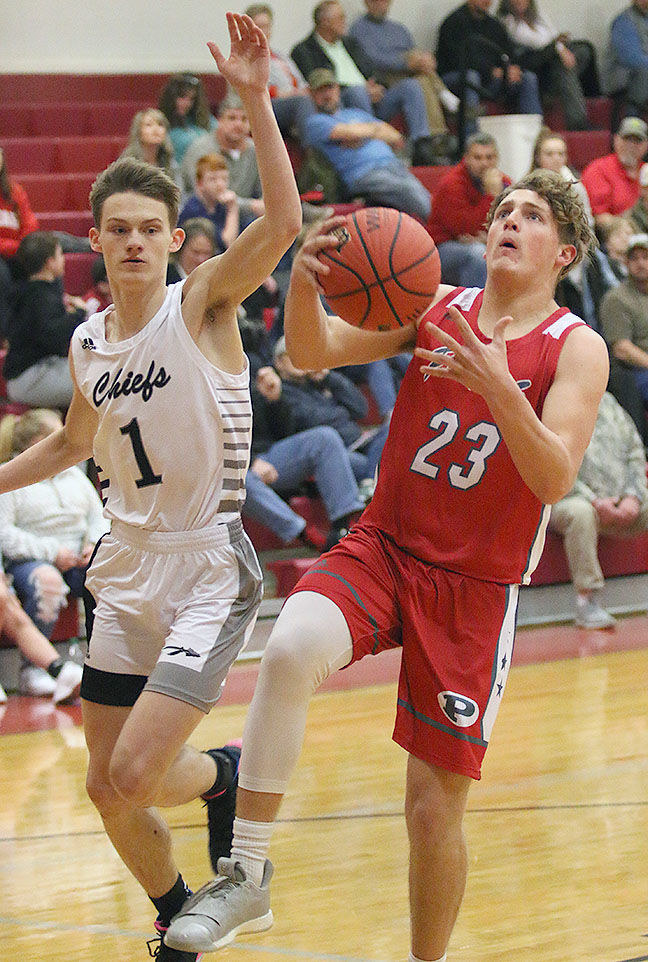 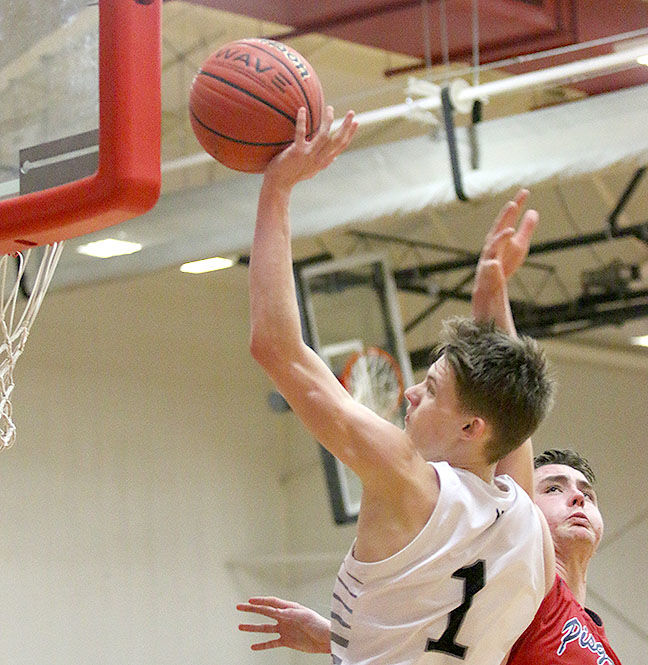 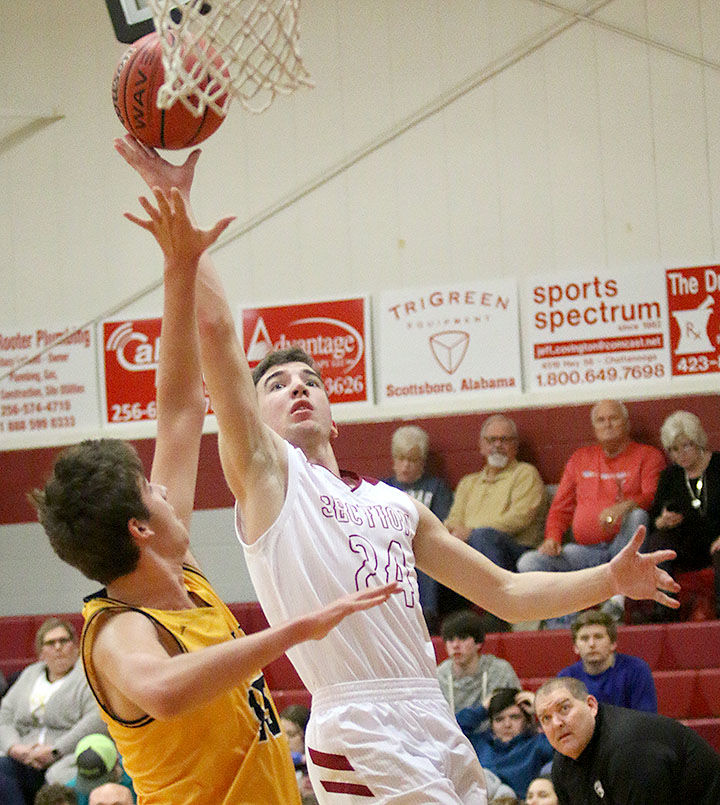 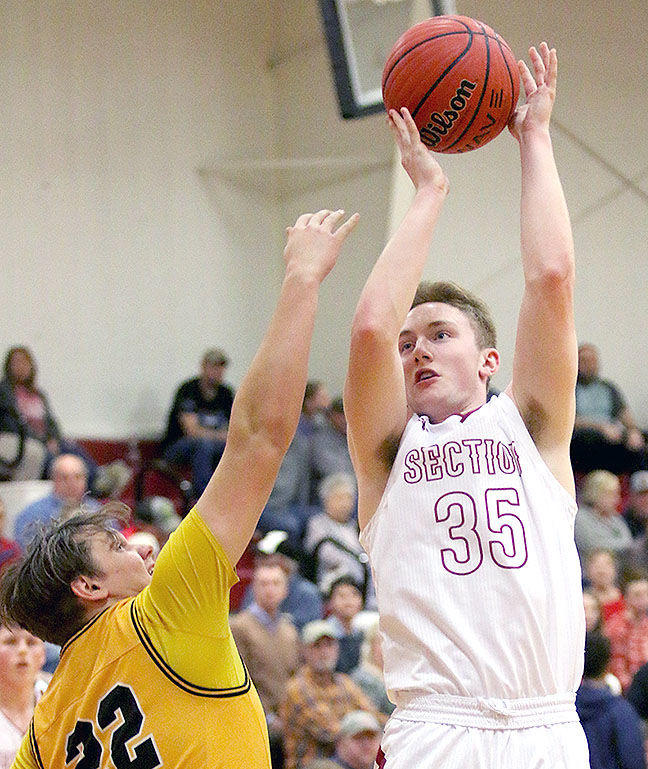 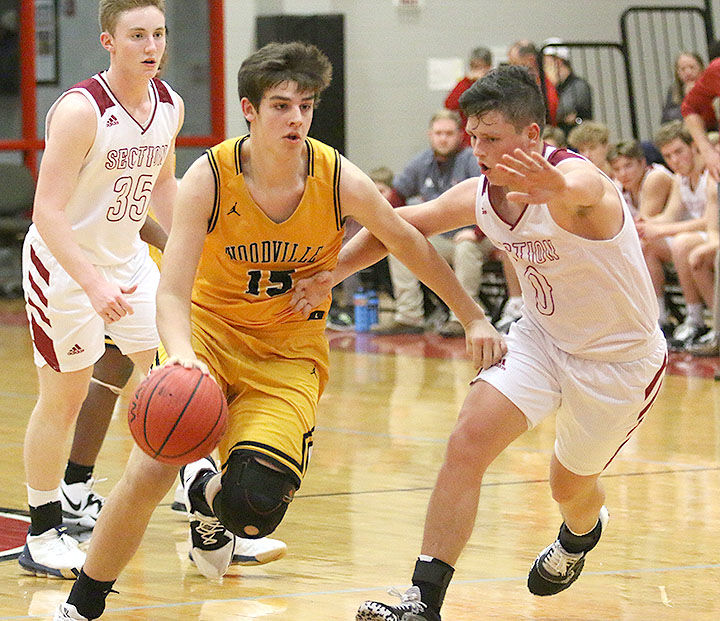 Tyrus Jackson shoots over the outstretched hand of Pisgah's Austin Brunk for a basket with 40 seconds left during North Jackson's 63-57 come-from-behind win in the Jackson County Tournament quarterfinals.

The fourth-seeded Chiefs erased a 16-point deficit with a 23-0 scoring run to end the third quarter and held off fifth-seeded Pisgah in the fourth quarter for a 63-57 Jackson County Tournament quarterfinal win Tuesday night at Pisgah High School.

North Jackson (15-8) trailed 44-28 before holding the Eagles scoreless over the final 6:18 of the third quarter while taking a seven-point lead into the final period.

“We changed up, went full-court man-to-man, and got some easy buckets. It loosened us up a little bit,” said North Jackson head coach Zac Barringer. “We relaxed, made some shots, got some pep in our step.”

North Jackson will play top-seeded and defending county champion Skyline in the semifinals Friday at 6 p.m. Second-seeded North Sand Mountain and third-seeded Section play in the other semifinal at 7:30 p.m. The championship game is Saturday at 7:45 p.m.

Pisgah (6-16) came out firing in the first half, passing through and around the North Jackson defense for good looks inside and outside as well as getting several run-out layups.

A defensive adjustment helped North Jackson finish the first half with a 7-0 run, but Pisgah opened the third quarter with Austin Brown’s 3-pointer and two buckets from Jared Wilks to push its lead to 44-28. But North Jackson’s defense took control from there, forcing 11 Pisgah turnovers, many of which led directly to points in transition.

The Chiefs tied the game 44-all on Zeke Ballard’s free throw with 1:28 left in the quarter before taking the lead on Brady Cunningham’s 3-pointer. Tyrus Jackson’s layup after a steal and Ballard’s layup after Cade Reed’s steal and assist put North Jackson in front 51-44 after three quarters.

The Chiefs’ lead grew to 58-45 with 5:46 remaining after Eli Gill’s 3-pointer and two Reed layups in transition. But Pisgah followed with a 12-0 run, triggered by treys from Brown and Wilks, to pull within 58-57 after Wilks’ bucket with 1:14 remaining.

Jackson’s driving basket put North Jackson up 60-57 with 40 seconds left, and after a wild sequence that featured three turnovers and a technical foul on a Pisgah player, North Jackson sank three free throws to seal the win.

Jackson led the Chiefs with 18 points while Gill netted 15, Cunningham added 11 and Ballard had eight.

Wilks finished with a game-high 33 points for Pisgah while Brown added 15.

Section 78, Woodville 47 — At Pisgah, third-seeded Section used a scoring flourish at the end of the second quarter to gain control on the way to the quarterfinal win Tuesday night.

Section (11-9) led 10-9 after one quarter and was in front 21-15 before closing the second quarter on an 18-8 run. Gabe Hilley and Trevier Porter made two 3-pointers each during the surge. The Lions led 59-39 after three quarters.

Logan Patterson scored a game-high 20 points for Section, which also got 15 from Hilley, 14 from Alex Guinn, nine from Porter, seven from Kaden Bradford and six from Bo Bradford.

Section plays second-seeded NSM in the semifinals Friday at 7:30 p.m.